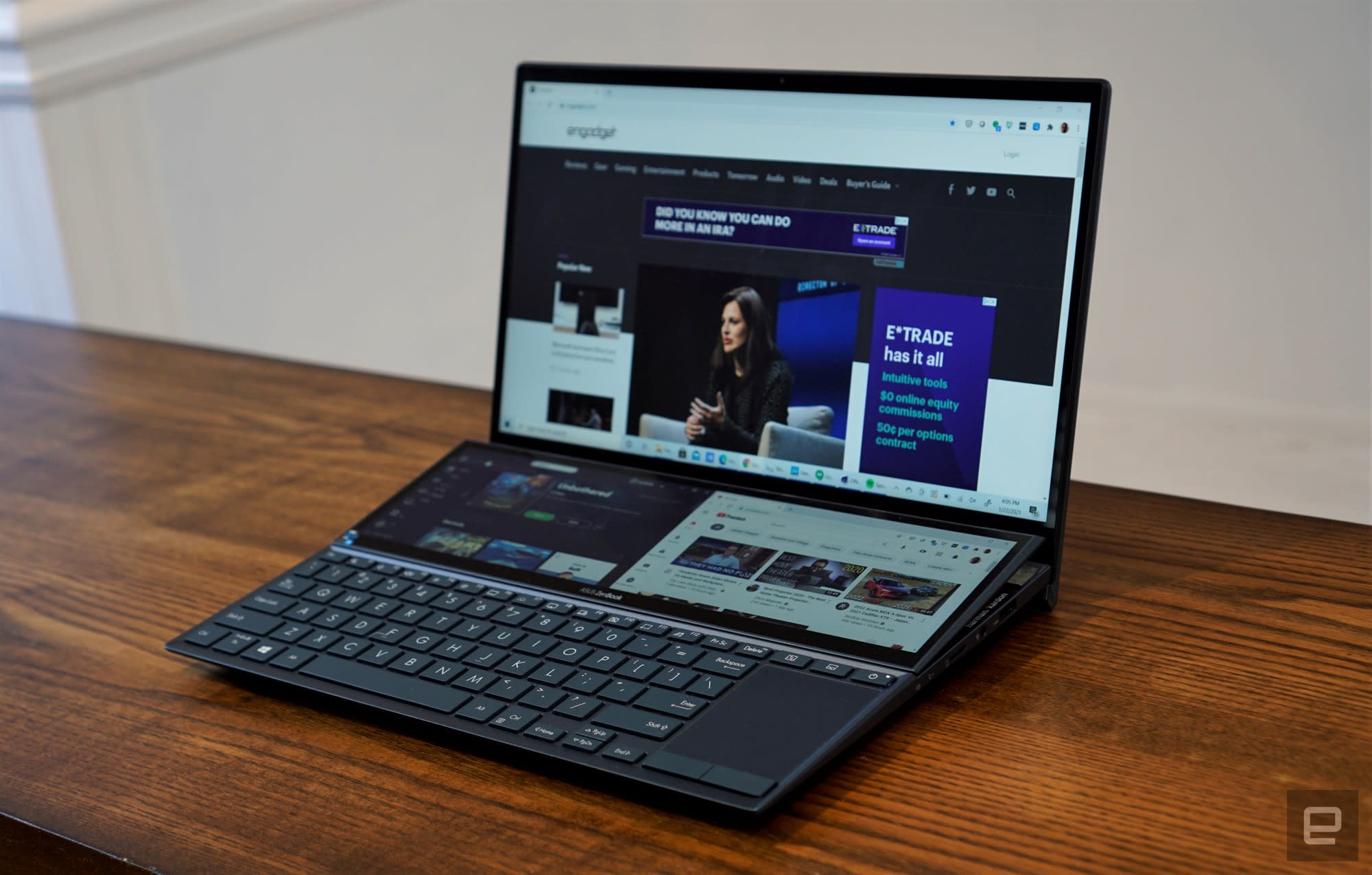 It’s a dual-screen PC you may actually want to buy.

ASUS isn't giving up on dual-screen PCs anytime soon. This year, it revamped the ultraportable ZenBook Duo with a rising second screen, more power and vastly improved software for working across two displays. Plus, the $999 starting price means you won't have to pay an absurd premium. While it's still not a total home run, the ZenBook Duo is far more compelling than last year — it even won a Best of CES award from us. Finally, there’s a dual-screen machine you may actually want to buy.

Let's get right to what makes the ZenBook Duo special: Its new 12.6-inch ScreenPad Plus still sits directly below a 14-inch main display, but now the second display lifts up slightly as you open it. That makes it easier to see and use, since you don't have to lean as much. The slight lift also makes the ScreenPad plus look more like it’s a seamless continuation of the top screen. 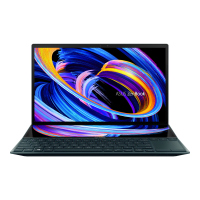 This isn't the first time ASUS has used a rising secondary screen — we also saw it in the gorgeous ROG Zephyrus Duo — but now it's available on a much cheaper notebook. And in my experience, it makes all the difference. The new ScreenPad Plus is brighter, so it's more useful outdoors. Its interface is also much zippier — now it feels more like interacting with a modern smartphone instead of an aging touchscreen laptop.

ASUS has also optimized its dual-screen software quite a bit: There's a new App Explorer shortcut that shows you everything running on your system, and allows you to quickly swap programs between screens. You can turn on gestures that let you flick apps across the screens as well, though I found those to be a bit more frustrating than using the shortcuts that pop up as you're dragging windows. Those let you quickly push an app to the other display, or maximize them across both screens.

Thanks to the more compact ScreenPad Plus hinge, ASUS says the Duo is 50 grams lighter than last year's model, clocking in at 3.53 pounds. That change also led to it being 3mm thinner at 16.9mm. It's obviously more hefty than standard ultraportables like the XPS 13, which measures 14.7mm thick and weighs 2.8 pounds, but the Duo still feels a bit more compact than last year. And given the potential for productivity with a second screen, I could easily live with something that's a bit heftier.

Beyond the revamped ScreenPad Plus, the ZenBook Duo looks almost the same as last year, with ASUS's standard magnesium alloy frame and sharp lines. There’s also a better selection of ports, including two Thunderbolt 4 USB-C ports (the last model had USB-C but no Thunderbolt); one USB 3.1 Type-A; a full-sized HDMI connection; a microSD card reader and the usual headphone jack.

The most notable upgrades are inside the ZenBook Duo: It now includes Intel's 11th-generation Tiger Lake processors; more powerful Intel Xe integrated graphics; an optional NVIDIA MX450 GPU; and up to 32GB of RAM. The Duo is also Intel Evo certified, which is marketing speak for a powerful ultraportable with long battery life.

Despite seeming like a quick branding opportunity, the Zenbook Duo lived up to that Evo badge in my testing. Our review unit featured an Intel Core i7-1165G7 CPU with only 8GB of RAM, but it still felt snappy as I juggled multiple apps at once. To be honest, I'd really only recommend the Duo with 16GB of RAM to really maximize your multitasking potential. But I was still able to run dozens of browser tabs, Evernote, Slack, Spotify and YouTube across both screens without any trouble.

Intel's Xe graphics also proved worthy, scoring nearly 4,000 points higher than last year’s model in 3DMark Night Raid. I didn't have a chance to do much gaming on the Duo, but that score alone makes it clear it'll be able to play a low-impact title like Overwatch. NVIDIA's MX450 should offer more GPU power, but I haven't been able to test that yet. More important than games, though, is the ZenBook Duo's raw computing power. Its vastly improved PCMark 10 and Geekbench scores make it clear that Intel's Tiger Lake hardware is a major upgrade. It also lasted 11 hours and 40 minutes in our battery test, which is close to many ultraportables, though five hours less than the XPS 13.

For the most part, I found the ScreenPad Plus to be a lot more useful than last year, simply because I could see it better. But it's still a bit too short for many apps. Technically, you can run three tiny windows side-by-side, but I found that too small to be useful. Instead, I typically had a web browser or a productivity app like Evernote up on the main screen, while two other apps sat below. Most of the time, it was a combination of YouTube and Spotify on the ScreenPad Plus for easily controlling media (and a nice way to sneak in my favorite YouTube channels while working).

The ZenBook Duo's main 1080p 14-inch screen looks great as well, with plenty of brightness and vibrancy to make videos and photos pop. You can definitely tell that it's of a higher quality than the ScreenPad Plus — it supports 100 percent of the SRGB gamut — but the fact that both can reach 400 nits of brightness makes it easier to pretend as if they're one single display. I just wish ASUS included a way to change the brightness of both screens simultaneously. As it stands you can use the function keys for the main display and the ScreenPad Plus's touchscreen settings to deal with brightness individually.

One major downside to the ZenBook Duo is that, once again, ASUS had to shove the keyboard and trackpad below the ScreenPad Plus. The keyboard is a bit cramped and uncomfortable to use without a built-in wrist rest, though I got used to it after a few hours. The keys themselves offer a decent amount of travel and feedback. The trackpad, though, is a major issue if you've been spoiled by the enormous touchpads on most ultraportables. It's vertical and shoved to the right, with little room for multitouch gestures. Again, I could live with it, but it wasn't exactly pleasant to use.

If you're considering the ZenBook Duo, you'll have to think hard on whether a short second screen is worth losing a more ergonomic keyboard and touchpad. At least this year, you'll have to pay a lot less for the privilege of owning the Duo: It starts at $1,000 with a Core i5-1135G7 CPU, 8GB of RAM and a 512GB SSD. Those are actually useful specs for mainstream users, but if you're really planning to put it through its paces, I'd recommend the $1,500 model with 16GB of RAM and an MX450. Our review unit, which again was limited to 8GB of memory, sells for $1,300. And you can spec the ZenBook Duo all the way up to $1,700 with 32GB of RAM, a 1TB SSD and NVIDIA's MX450.

ASUS's ZenBook Duo isn't perfect, but it's surprisingly compelling and a notable upgrade over last year's model. It's no wonder why it won our Best of CES 2021 award for PCs: the Duo is genuinely innovative in a time when many ultraportables are starting to feel stale. Dual-screen notebooks aren't for everyone just yet, but ASUS has made a stronger case for why you would want one.