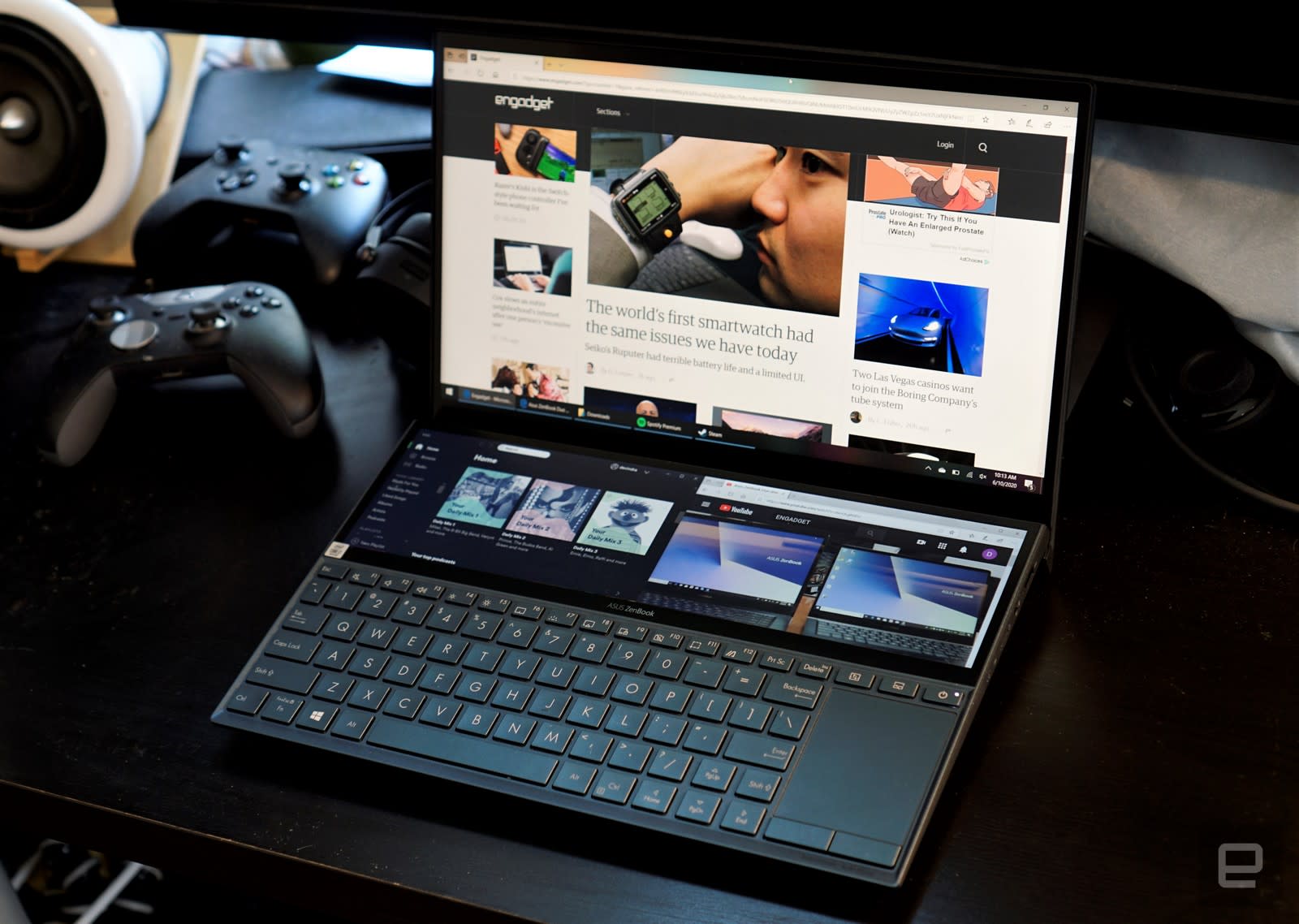 It's unique, but still very niche.

We've seen some wild dual-screen concept laptops over the past few years, but ASUS deserves credit for actually bringing them to life. First there was the ScreenPad on the ZenBook Pro in 2018, which featured a touchpad that was also a 3.5-inch touchscreen. ASUS followed that up last year with the ZenBook Pro Duo, a powerful notebook with a wide (but not so tall) display right below its main screen.

Now there's the ZenBook Duo, an ultraportable spin on that design. It's yet another example of how useful secondary screens can be in a notebook -- but given its smaller size, ASUS had to make several compromises along the way.

But let's start with the good: those two screens. Up top, there's a 14-inch 1080p display with very thin bezels. And just below that, there's the ScreenPad Plus, measuring in at 12.6-inches diagonally and 3-inches tall. The main screen looks fantastic, with bold colors and plenty of brightness for working outside. ASUS says it covers 100 percent of the SRGB gamut, and that it's also Pantone validated for quality at the factory. While the ScreenPad Plus looks a bit duller and dimmer, the difference isn’t as dramatic as it was on the Pro Duo, which had a hard time unifying its OLED screen and a secondary LCD.

The ScreenPad Plus, functions like a secondary display. You can drag apps down from the top manually and resize them as you see fit. While moving a window, three options appear above the title bar, allowing you to quickly throw something to the ScreenPad, add it to the secondary display launcher, or span it across both displays. The latter feature works well when you need a taller view for data-heavy apps like spreadsheets, or if you're juggling a ton of tracks in Audacity. 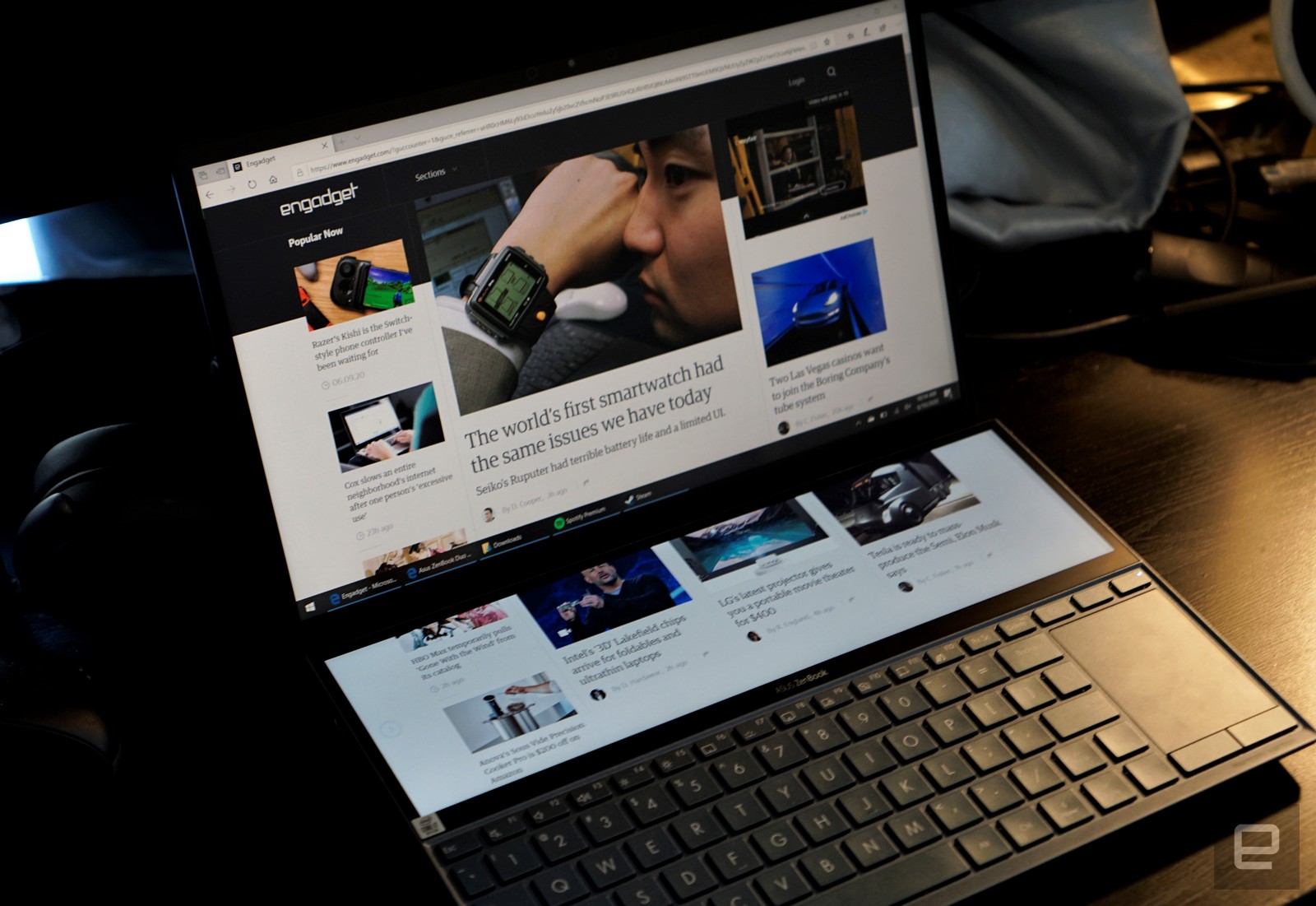 The main display’s touchscreen makes it easier to use natural finger controls across both screens. And, as a helpful touch, you can quickly swap all of your windows across both screens by hitting a single button on the keyboard. The ScreenPad Plus also has its own menu along its left side, letting you adjust its brightness and app shortcuts. You can also assign "task groups," or collections of app layouts across both screens. That's particularly useful for easily saving and recreating your favorite workflows.

The basic act of dragging apps between the screens is easy to grasp, especially if you've used a dual-monitor setup before. The ScreenPad Plus worked well for watching YouTube videos or keeping an eye on Slack while I worked on the main screen. Its short height means you can only do so much, though. And while it technically can fit three windows side-by-side, I generally found them too small to be usable. Realistically, it's a far better experience with one or two apps.

Just like last year, ASUS's custom software also feels bolted on, instead of being a core part of the operating system. It's a bit like adding a touchscreen infotainment system into an older car -- sure it works, but it won't be the same as getting a new vehicle built around modern features.

Perhaps Windows 10X, Microsoft's upcoming OS meant for dual screens and unique notebook concepts, could help to smooth out some of the rougher edges for ASUS. In particular, I'd love to see the ScreenPad Plus's touchscreen menu more directly integrated into Windows -- right now it looks like a low-rent Android app. 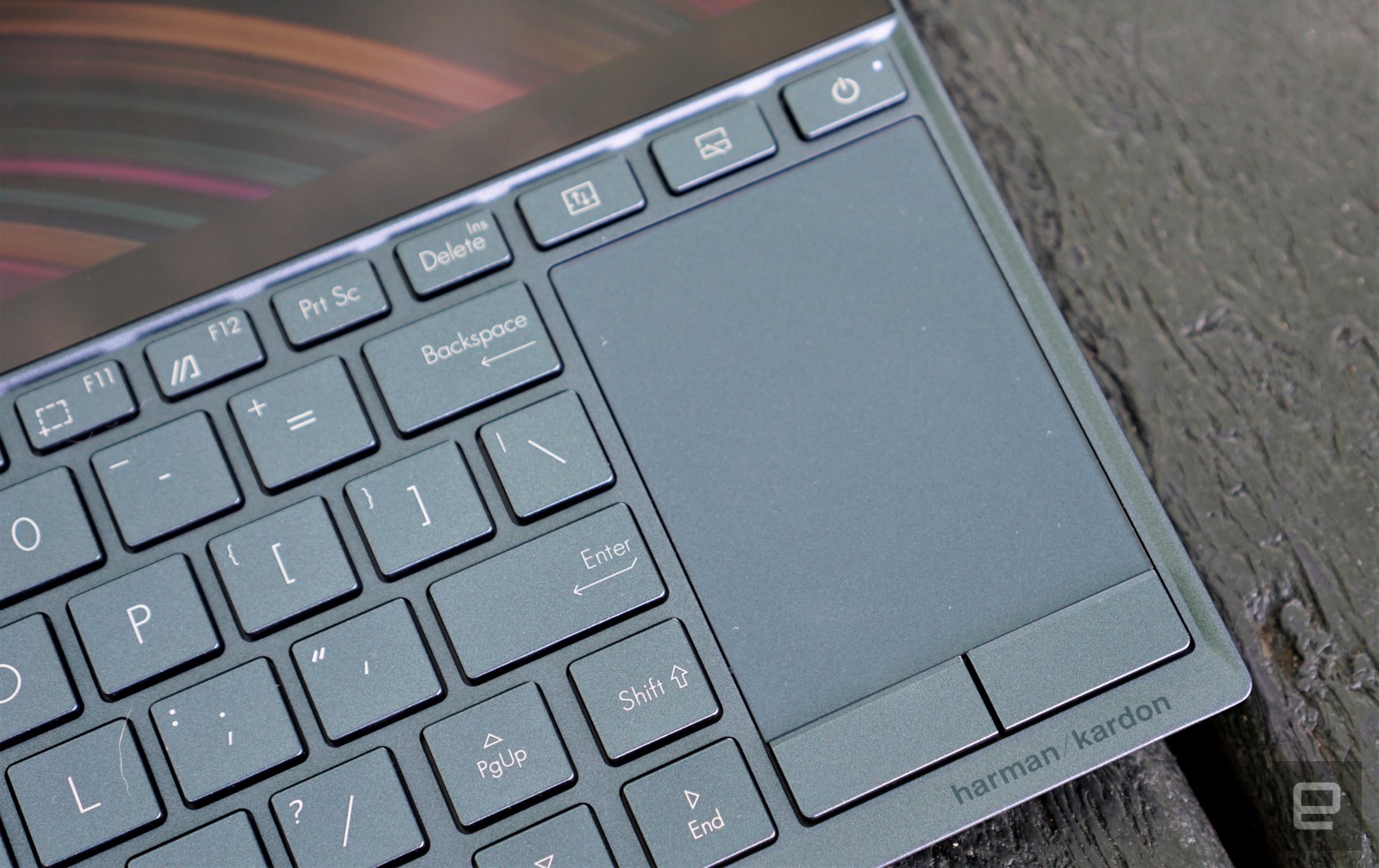 Unfortunately, the ZenBook Duo's other input devices suffer a bit to make room for two screens. The keyboard is right up front, with a cramped layout that doesn't really give your fingers room to breath. The vertical touchpad, which sits to the right of the keyboard, is too small to use for any serious work. Last year's ZenBook Pro Duo was able to fit in a full-sized keyboard and a larger touchpad, so it didn't feel nearly as restrictive. Trying to get anything done on the ZenBook Duo just felt like an exercise in frustration. While I got used to these compromises after a few days, they're annoying enough to be an instant deal breaker for many users.

Having two screens also means you'll also have to deal with having a laptop that's heavier and thicker than most ultrabooks. The ZenBook Duo clocks in at 3.3 pounds, while the XPS 13 and MacBook Air weigh 2.8 pounds. You'll definitely notice that extra heft, but it may be worth it if you actually need to use both displays regularly. Personally, though, I'd rather stick with a slimmer machine. 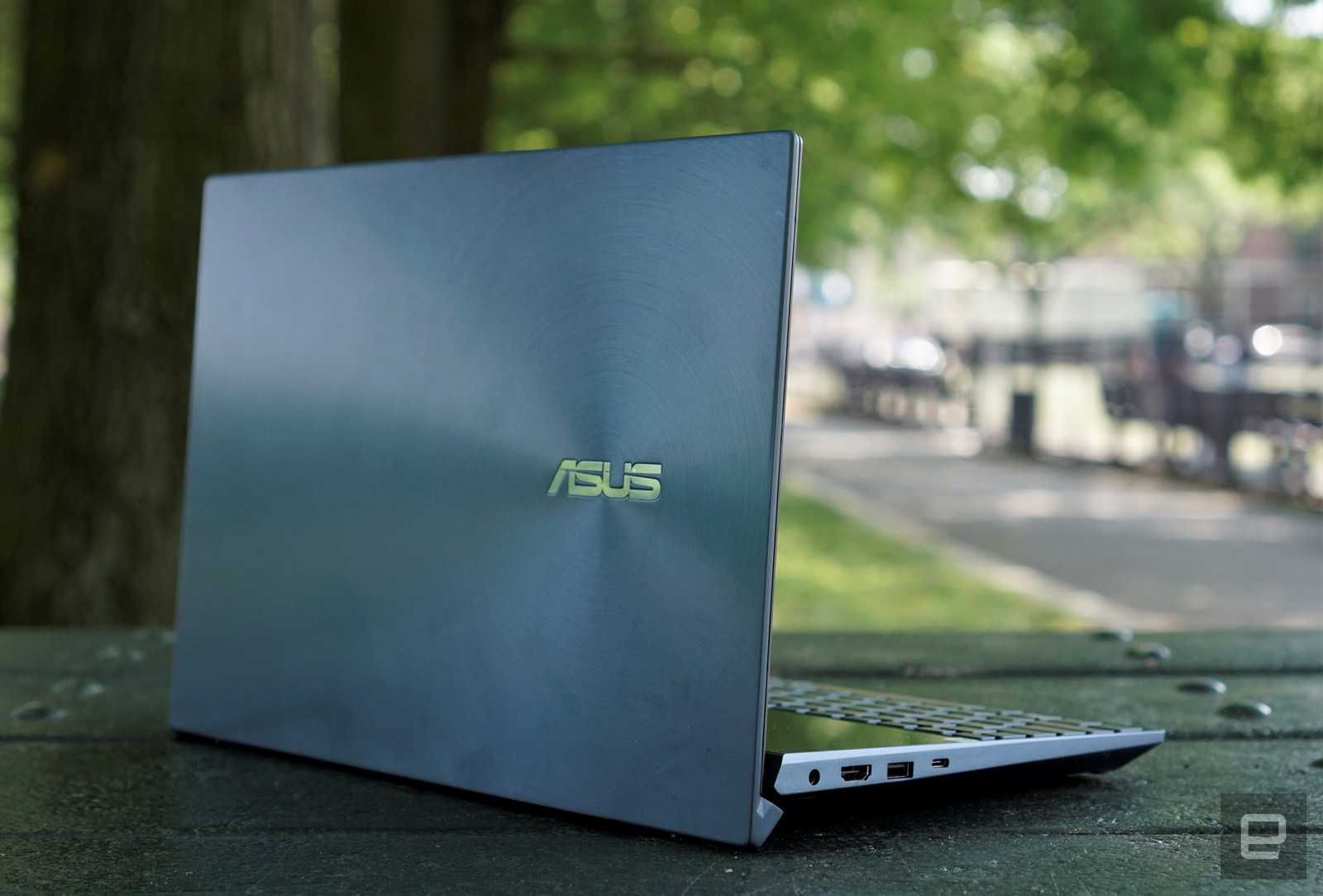 As you'd imagine, the ZenBook Duo instantly stands out from every other notebook when it's open. But it's another story if you're not actually looking at the screens. ASUS is still relying on its metallic ZenBook case design, which is sleek and smooth to the touch. Its matte finish gives off an air of subtle refinement -- certainly more than the shinier cases from past ZenBooks. ASUS also includes an array of useful ports, including two USB Type A connections, one USB C, HDMI and a microSD card slot. Unfortunately, it doesn't support Intel's fast Thunderbolt 3 standard, which is technically four times faster than standard USB 3.1.

Beneath the hood, the ZenBook Duo features Intel's quad-core i7-10510U, 16GB of RAM and NVIDIA's GeForce MX 250 GPU. ASUS likely opted for that NVIDIA GPU to better handle dual displays. It doesn't really lead to much more performance compared to the XPS 13's integrated Iris Plus graphics though. Both notebooks ended up scoring almost the same in the 3DMark Sky Diver benchmark, though the ZenBook Duo edged out a victory in the newer Night Raid test. And Overwatch was a bit more playable in 720p and even 1080p with lower graphics settings, thanks to more consistent frame rates.

Unsurprisingly, given all of its horsepower, the ZenBook Duo handled all of my productivity needs without issue. But I really appreciated having 16GB of RAM when dealing with dozens and browser tabs and other apps running on the secondary screen. This is a machine meant for multitasking, after all. The more memory, the better. It also lasted a surprising 11 hours and 55 minutes on our battery test, even with both screens on. The ZenBook Pro Duo, had a hard time reaching four hours.

If you're considering the ZenBook Duo, the real question you need to ask yourself is how much do you really need two screens on a $1,499 ultraportable. ASUS did a decent job of fitting in a second display, but it leads to plenty of compromises. I wouldn't go so far as to call the ScreenPad Plus a gimmick, but it's not something most people actually need -- not when you can get a thinner, lighter and cheaper machine like the XPS 13. Still, it's a noble experiment -- the ZenBook Duo stands alone in a sea of ever-similar ultraportables.