The Zephyrus G14 is the ideal gaming laptop. It's something that ASUS has been working towards for years with the impressively thin Zephyrus line. The G14 is incredibly fast, thin and light, and, surprisingly enough, it even packs in a decent amount of battery life. It's a new landmark for ultraportable gaming notebooks, something that every competitor will be judged against.

It's also a strong debut for AMD, as this is one of the first laptops to feature its powerful Ryzen 4000 series chips, including the eight-core Ryzen 9 4900HS. Finally, there's some competition for Intel's ubiquitous notebook chips. Ironically, that AMD hardware is paired together with NVIDIA's latest GPUs, all the way up to the RTX 2060 Max-Q. (We're still waiting for the new Radeon mobile GPUs to show up.)

The Zephyrus G14 made a strong impression the instant I picked up its shipping box -- it was so light, I seriously thought ASUS had forgotten to pack the laptop. But no, it was there -- it just felt impossibly compact for a 14-inch machine, weighing in at 3.5 pounds. Most slim gaming notebooks these days typically come in around 4.5 pounds -- the only notable exception is Razer's Blade Stealth, which gives up a lot of power to reach 3.1 pounds. The Zephyrus G14 doesn't feel noticeably heavier than the Blade Stealth, and given ASUS's vastly superior hardware, I didn't mind the extra weight.

I also dug the hip two-tone aesthetic ASUS is going for with the Zephyrus G14. Whereas previous models in this line were dark and a bit minimalist, the G14 has a bold angular silver case with tiny perforations along the top. It looks like something a character in Akira would use. Those little holes were just stylish accents on my review unit, but you can also equip the G14 with an LED Matrix to display images and animations to anyone watching you game. And while it's attractive, more importantly, the G14's magnesium alloy case feels incredibly sturdy. 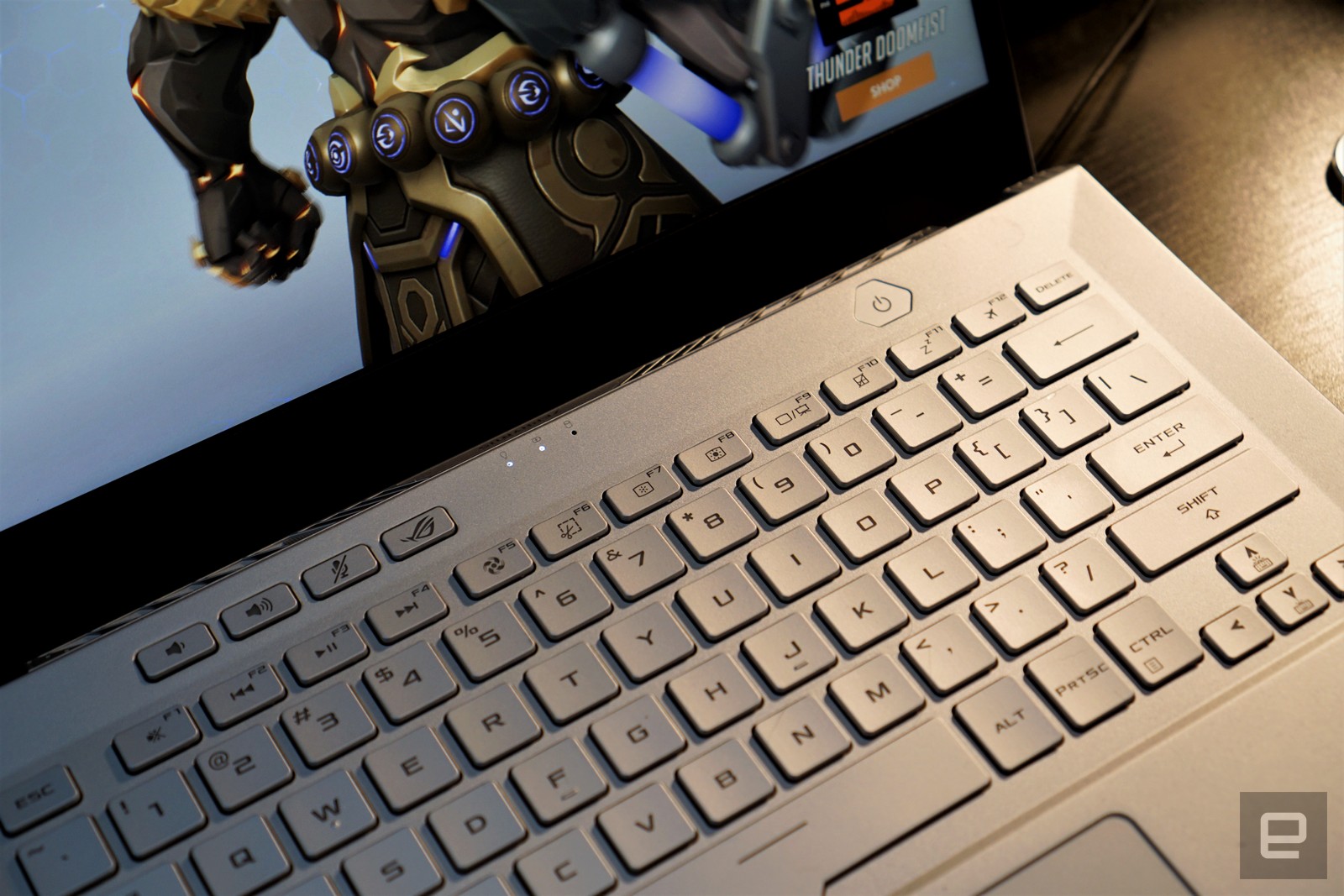 Once I was done ogling it, I jumped into Overwatch to see how well the G14 handled gameplay. Given its CPU and GPU combo, I figured it wouldn't have any trouble reaching high framerates, and I wasn't disappointed. It hit a steady 180-200 FPS, more than enough to keep up with the laptop's 1080p 120Hz screen. I was a bit surprised by how smooth everything looked, though. It was as if everything was painted on the screen. For that you can thank AMD's Freesync, which helps to avoid tearing. That's something that only used to work with Radeon GPUs, but last year NVIDIA relented and allowed Freesync displays to work on its hardware. Thank goodness for competition.

Overwatch ended up being the ideal game to kick off my time with the G14. Its Pantone-validated screen handled the vibrant colors and fast motion with ease -- it didn't feel like a step down from the experience you'd get on heavier and more robust gaming notebooks. That's an issue I had with the Blade Stealth, which was stuck with a 60Hz screen and no G-SYNC support. Then again, you could blame that laptop's slow GTX 1650 Max-Q GPU for those limitations. The G14 was literally up to three times as fast as the Blade Stealth while playing Overwatch.

Destiny 2 also shined on the Zephyrus, reaching between 85 and 120 FPS with maxed out settings. Again, the performance wasn't a huge surprise, but I still got a kick out of seeing what such a light machine can do.

As you'd expect, the fans on such a thin gaming laptop can get pretty loud, but they do a solid job of keeping everything cool. I saw CPU temperatures around 74 Celsius while gaming heavily, and the GPU typically reached 65 Celsius. 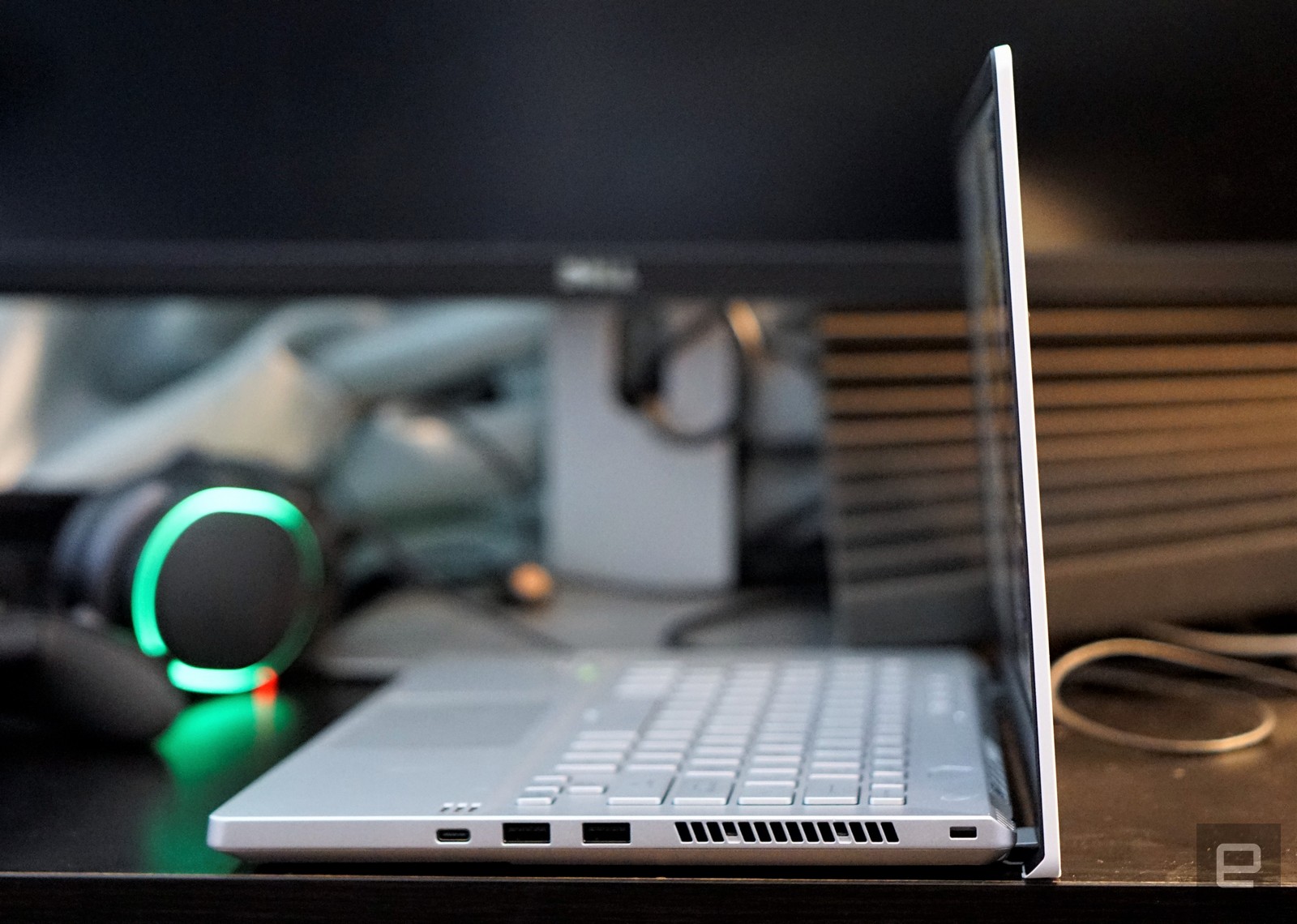 The Zephyrus G14's keyboard did a great job of keeping up with my furious shooter spree, thanks to excellent feedback and satisfying key depth. I found it a bit more frustrating to use for productivity work, though. While I can type on it well enough, the keycaps always felt a bit too small for something with such a wide frame. I'd love to see ASUS expand the keyboard a bit more to allow for some breathing room. The touchpad, meanwhile, is practically flawless. It's smooth and accurate, whereas I'm used to suffering through subpar touchpads on gaming laptops.

Outside of games, the Zephyrus G14 also proved itself to be a worthy workhorse. Our review unit, which came with 16GB of RAM and a speedy NVMe SSD, had no trouble juggling dozens of browser tabs while streaming and transcoding video in the background. It also flew through basic tasks, like launching apps and moving large files. It was as if the computer was anticipating everything I tried to do.

The G14 also converted a two-minute 4K clip in Handbrake to 1080p in just 38 seconds with the AMD encoder and in 35 seconds with the NVIDIA alternative. That's seven seconds faster than the HP Envy 32 we reviewed, a powerful all in one PC with an Intel Core i7 desktop processor and RTX 2060 GPU.

If you're editing media on the go, the Zephyrus G14 is a worthy alternative to a machine like Dell's XPS 15. It even packs in a healthy amount of ports for plugging in all of your accessories: two USB 3.2 Type A; two USB-C connections, one of which supports DisplayPort; full-sized HDMI; and the usual combination headphone/mic jack. The only thing it's missing is an SD card reader, but I suppose we're all used to the dongle life these days.

As for battery life, the Zephyrus G14 is something of a miracle. In our benchmark, which involves looping an HD video, it lasted 12 hours and 45 minutes. That's the most we've ever seen from a gaming machine, and it's even impressive for a standard ultraportable. It's also worth mentioning that the G14's 180-watt power adapter is actually reasonably sized -- it's not an unwieldy brick like you'd find on some gaming laptops. If you're in a pinch without the adapter, you can also charge it over USB-C when you're not gaming.

While the G14 has pretty much everything we'd want in a gaming notebook, there's no webcam. ASUS is positioning it as a machine for streamers who have external cameras, which makes a certain amount of sense. And the company has historically only shoved in middling webcams in their laptops anyway, like the ZenBook S13. Still, it would have been nice to have something built into the G14 for a quick Skype chat. But given everything else this laptop does right, this isn’t a huge compromise.

And don't forget my biggest issue with the Blade Stealth: All that money got you a much slower GTX 1650 GPU and a 60Hz screen. It couldn't even run Destiny 2 consistently at 60FPS. The Zephyrus G14 weighs just a half pound more and blows away the Stealth on every level.

ASUS's first Zephyrus laptop was a bit of an impractical showpiece -- it was very thin and packed in a GTX 1080, the fastest mobile GPU at the time, but it only lasted around two hours on battery and weighed nearly five pounds. The Zephyrus G14, with its fast performance, light weight and excellent battery life, shows that you can make a truly no-compromise ultraportable gaming laptop today. It's so good, you won't miss the webcam.