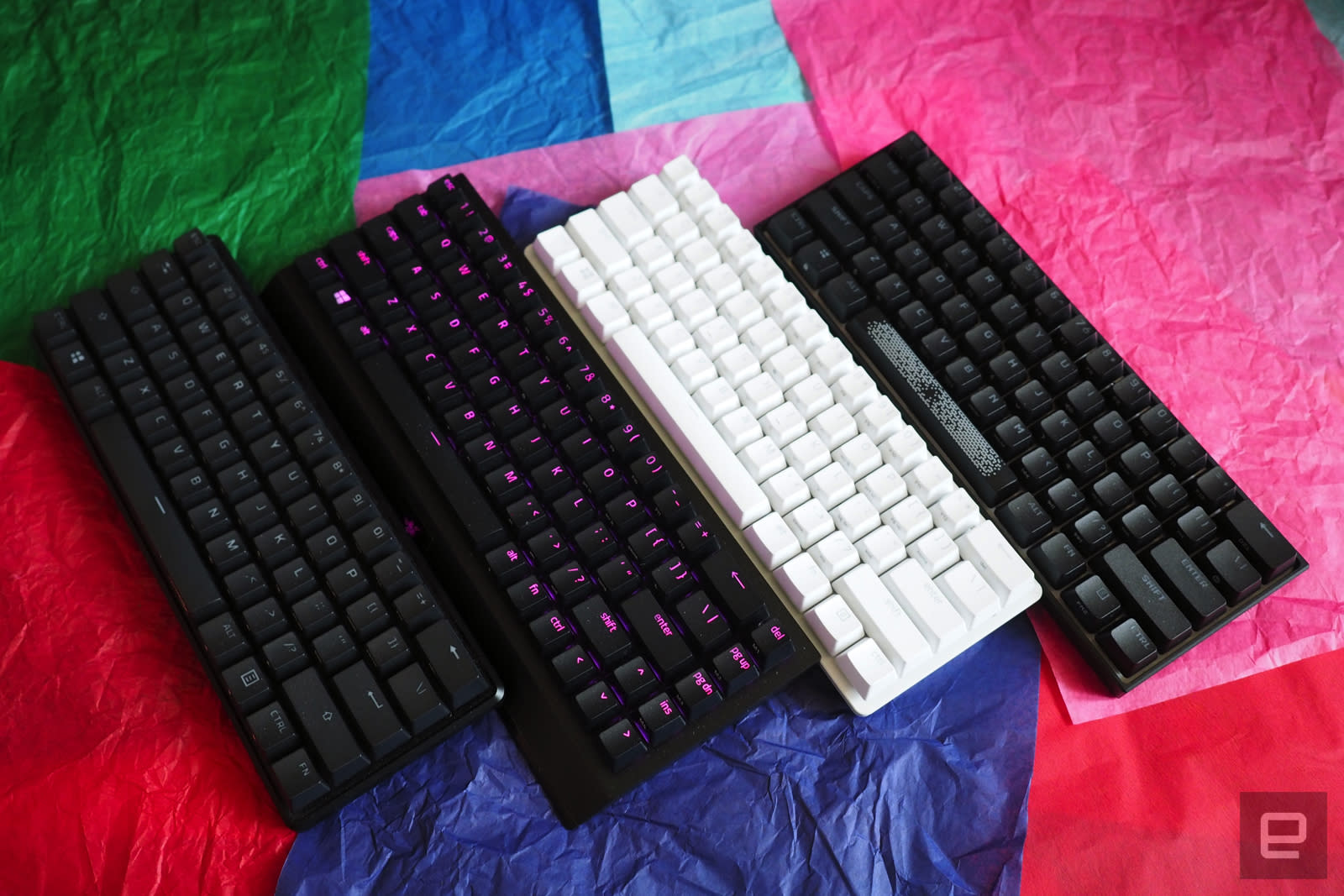 The best 60-percent keyboards you can buy

Plus our advice on how to choose the right one for you.

K. Naudus
@krisnaudus
May 31, 2021 12:00 PM
In this article: corsair, gear, gaming keyboard, razer, gaming, evergreen, best tech, feature, shopping, hyperx, centralcommerce, mechanical keyboard, commerce, streamshopping, shoppable, ccttech
All products recommended by Engadget are selected by our editorial team, independent of our parent company. Some of our stories include affiliate links. If you buy something through one of these links, we may earn an affiliate commission.

Gaming keyboards are plentiful and diverse right now. You can buy them in black or white, wired or wireless, and with at least a dozen key switch options. And every year they’ve gotten bigger and more complex, with media buttons and macro keys and bright rainbow LED lighting. However, this past year has seen some manufacturers go in the opposite direction, introducing 60-percent keyboards that are cute and compact. But are they worth buying?

How many keys does a 60-percent keyboard have?

First off, it’s worth nothing that gaming keyboards tend to follow one of three different configurations. The most common one is the full-size deck, which will usually have somewhere between 100 and 110 keys, depending on whether the manufacturer includes media buttons or macro keys. There’s always a function row located along the top of the keyboard, and a number pad on the far right. Most gamers will prefer a full-size model because it lets them perform many different functions with just one press, and set up macros for activities that aren’t already built-in to the keyboard.

Tenkeyless decks have been pretty common for a while now; those are keyboards that omit the number pad on the right. That’s it. They still have function keys and media controls, but they’re narrower since they omit 17 keys. Yeah, it’s actually more than 10 keys but “seventeenkeyless” doesn’t have the same ring to it. Gamers might opt for one of these when they need a little more space on their desk, and they don’t need a quick way to enter numbers or do calculations (which is my number one use case for the right-hand pad).

Then there are 60-percent keyboards which, as the name indicates, cut out 40 percent of the standard keyboard size and only have 61 keys. Not only do they just remove the number pad, but the function keys are gone, along with the arrow keys and those weird system keys like “print screen” and “home” that are only useful when you happen to need them. On some computers they don’t even work.

On a 60-percent keyboard you’ll access these buttons by using the function key; there’s no standard layout between companies so you’ll have to learn new hotkeys if you switch between manufacturers like Razer, HyperX or Corsair. They also lack built-in wrist rests, though the height is at least adjustable.

Razer also just introduced a 65-percent keyboard, a less common configuration which keeps the arrow keys and some functions but still tosses the rest to maintain a reduced profile. This is probably a preferred option if you use the arrow keys a lot. I need them because I edit a lot of text, and some games may use them instead of the standard WASD array for controlling your character.

What are the benefits of a 60-percent keyboard?

With so many functions removed, why buy a 60-percent keyboard? The number one reason is space of course. If you’re gaming in tight spaces or just have a lot of crap on your desk like I do, not having to shove stuff aside just to make some elbow room is nice. It’s especially helpful if you tend to eat near your computer, as a 60-percent keyboard’s small size makes it easy to push out of the way to rest a plate or bowl on your desk. It actually keeps the keyboard a lot cleaner, too, since I can easily shake crumbs out of it with one hand.

A smaller size also makes it more portable, obviously, with a 60-percent keyboard taking up less space than a laptop in your bag, though it’s still a little thick. They do have lower-profile keys than standard decks at least, though if thickness is your number one concern then carrying around a mechanical keyboard is probably not for you.

One big feature that doesn’t get talked about a lot is that all of the recent 60- (and 65-) percent decks use detachable USB-C cords. So if you switch between workspaces often, you can easily leave a cord at each desk to quickly plug in your keyboard. As someone who tests a lot of keyboards I’ve found this handy because I can switch out the deck and leave the cord intact. It’s often a real pain to have to unplug cords and untangle them from my office setup every time I try a new keyboard, but for the 60-percent models I’ve been using the same wire for all of them.

The best for most gamers: Razer Huntsman Mini

The best of the major 60-percent keyboards out there right now is the Huntsman Mini. It uses Razer’s opto-mechanical switches, which I haven’t been too fond of in the past, but the company seems to have made some changes that make it a much more pleasant typing experience. It’s quiet and smooth with good response time, though people who prefer a springy key feel should look elsewhere. It’s not a wireless keyboard, so if you take it on the go you’ll need to make sure you always have a USB-C cord handy. The Huntsman Mini also comes in white, which means it’ll blend into your decor more than most gaming accessories, especially if you choose to customize the LED lighting.

Cons: No wireless; not everyone will be a fan of opto-mechanical keys.

If you need a solid, sturdy brick of a 60-percent keyboard, the HyperX Alloy Origins 60 is a mechanical deck on a metal baseboard. It’s heavier than the other options on the market, so it might not be the best if you’re aiming to keep your travel bag as light as possible. But if you’re a particularly rough typist this is the one that will put up with hard keystrokes the best. It also earns points for being the one 60-percent keyboard that puts the secondary arrow functions at the bottom right of the deck where you’d normally look for those, instead of tucking them away in the middle.

Razer’s BlackWidow line has long been a favorite of the gamers here at Engadget, and the V3 Mini is no exception. Unlike the other keyboards on this list it’s a 65-percent keyboard, which means it still has arrow keys and a column of miscellaneous keys on the right side that can double as macro buttons. There are two switch options available to suit different typing preferences, either clicky and tactile (green) or linear and silent (yellow). It’s worth noting that the latter description is the company’s term for it, and the V3 Mini’s typing is still noticeably audible to those around you.

Pros: Two types of switch available; has both 2.4G and Bluetooth wireless; includes keys other keyboards don’t have.

Cons: Expensive; the lip at the bottom is bulky.

Corsair usually makes pretty great keyboards, but I couldn’t necessarily say that of the K65 RGB Mini, its entry into the 60-percent market. The materials were substandard for the company, with a plastic casing that felt hollow and keys that made a ringing noise when hit. But it’s not a completely terrible accessory, and users already invested in Corsair’s iCUE software might want to keep their accessories streamlined under one customization suite instead of having to bounce between different interfaces. If that isn’t a concern for you, the HyperX Alloy Origin 60 is both better and cheaper.