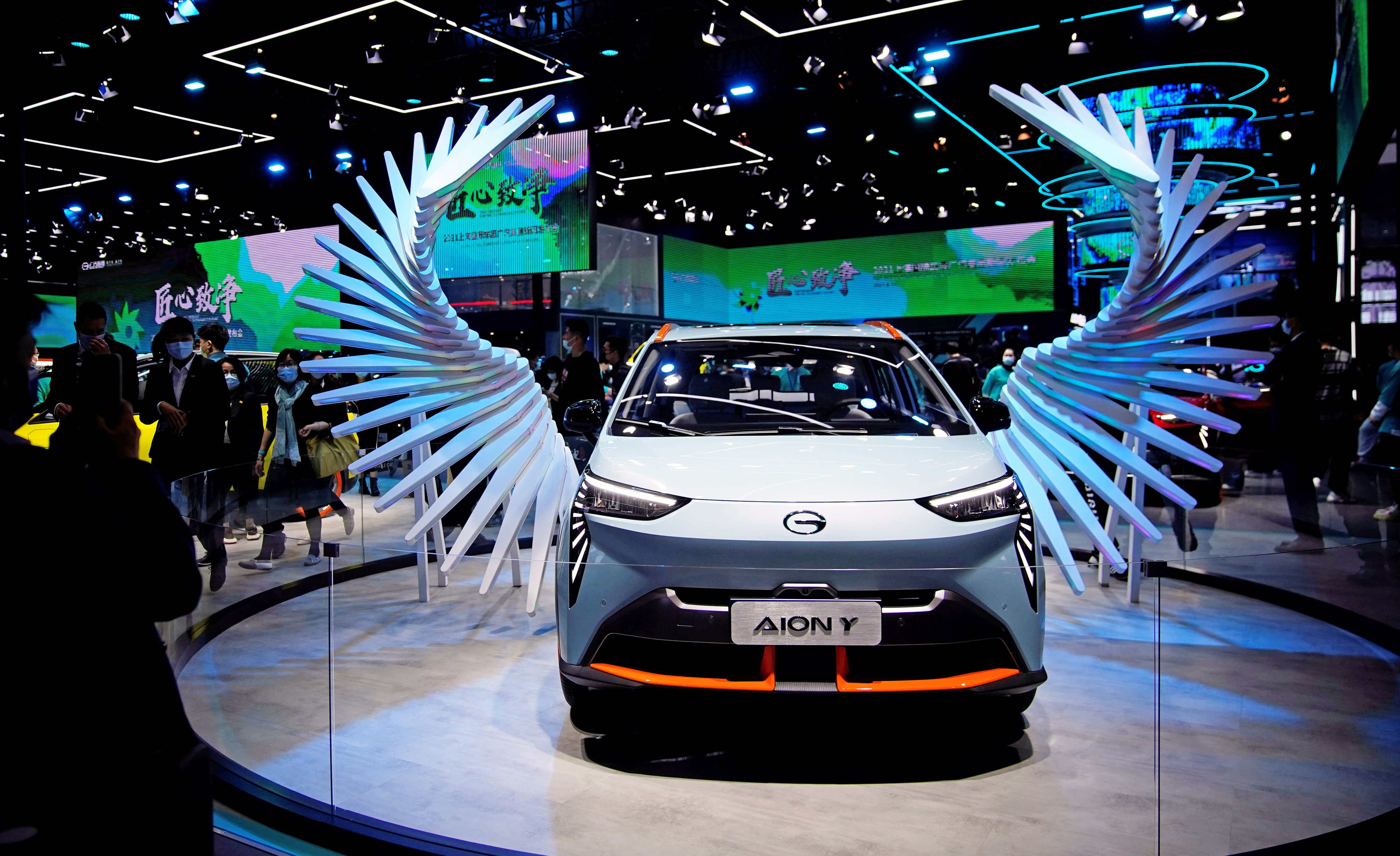 In less than a decade, China has risen to the forefront of electric innovation.

Though primarily still known for its school buses here in the US, BYD has become China’s largest automaker with a one-trillion-yuan, or about $149 billion, market capitalization. That’s bigger than Ford and GM’s combined market caps ($66.01B and $56.63B, respectively). And while Americans were gearing up for Fourth of July festivities, BYD was quietly supplanting Tesla as the world’s most prolific EV automaker with the Shenzhen-based, Berkshire Hathaway-backed car company reportedly outselling Tesla in the first half of 2022 by 641,000 cars to 564,000.

We are excited to be taking initiatives for building a greener future for all!#BuildYourDreams #greentechnology #electricvehicles pic.twitter.com/e388znWsPn

BYD is one of more than 450 registered EV firms in China, all of which are competing for a slice of the world’s largest automotive market, with future designs for the US and Europe as well. American ingenuity may have initially ushered in the EV era, but it’s been China’s relentless commoditization of the technology that has put the nation’s automakers at the forefront of the global electric vehicle race.

“Developing new energy vehicles is essential for China’s transformation from a big automobile country to a powerful automobile country,” Chinese President Xi Jinping said in 2014. “We should increase research and development, seriously analyze the market, adjust existing policy and develop new products to meet the needs of different customers. This can make a strong contribution to economic growth.” In China, so-called New Energy Vehicles (NEVs) are basically any plug-in electric (either hybrid or battery) which qualifies for financial subsidies from the government — specifically, battery electrics, plug-in hybrids and fuel cell EVs.

These efforts can also help China meet its Paris Accord carbon neutrality targets of a 20 percent reduction by 2035 and a 100 percent reduction by 2060 – lofty goals given it’s currently the world’s biggest emitter of carbon dioxide. These policies aim to reduce pollution in Chinese cities, reduce the nation’s reliance on imported oil, and “position China for global leadership in a strategic industry,” according to a 2019 study out of Columbia University.

The country’s central government has invested heavily over the past decade to spur growth in the NEV industry, leveraging a mix of policy, tax incentives and consumer subsidies. As of 2020, EVs must account for 12 percent of production for any company that manufactures or imports more than 30,000 vehicles in China (up from a 10 percent requirement the previous year). The government has also deeply subsidized consumers’ EV purchases with more than $14.8 billion since 2009, providing up to $3,600 for battery electric vehicles (BEVs) with more than 400 km range, though those rebates were first halved, then eliminated by 2021.

The government has also provided funding and standardization mandates for building out China’s charging infrastructure with a goal of 120,000 EV charging stations and 4.8 million EV charging stalls available by 2020. Local and municipal governments further incentivized EVs with discounts on licensing fees and preferential parking spots for NEVs.

The plan appears to be working. Nearly 15 percent of new vehicle sales in 2021 (totaling $124.2 billion) were NEVs — that’s a record 2.99 million units and a 169 percent increase over the previous year, according to data compiled by the China Passenger Car Association (CPCA). Of the 6.75 million total EVs sold in 2021, itself a 108 percent YoY increase, Chinese EVs accounted for 53 percent of the global market. Including PHEVs, some 3.3 million electrified vehicles were sold in China last year, compared to just 608,000 in the US. What’s more, the China Passenger Car Association now estimates that another 6 million EVs will be sold in 2022.

The Chinese government anticipates EVs will achieve 20 percent domestic market penetration by 2025 and 60 percent by 2030. UBS Global has forecasted that three in five vehicles (60 percent) on China’s roads by 2035 will be electrified, up from the 1 percent they constituted in 2019. By 2027, the market is expected to reach $799 billion.

At the Boao Forum in 2018, President Jinping announced a raft of sweeping economic reforms designed to further open the nation’s markets, including an announcement to phase out existing limits on foreign ownership of automakers. The Policy for the Automotive Industry of 1994 contained a key provision that banned foreign business entities from owning more than 50 percent of a joint venture with a Chinese firm as well as from participating on more than two such ventures for any single vehicle type sold in the country — the so-called 50%+2 rule. Jinping’s reforms will see the two-venture limit lifted in 2022 and the restriction on ownership share eliminated at the end of 2023.

This regulatory relaxation could have immense an impact on the Chinese EV market, potentially increasing competition for domestic OEMs from an influx of international automakers hawking additional NEV brands and models. The rule change could also see foreign firms renegotiate their ownership stakes, potentially even fully buying out their Chinese partners, though as Sino Auto points out, that isn’t likely to happen in the immediate future as the existing joint ventures have an average remaining contract length of 19 years. Overall, the policy shift should give international firms a more even footing with local Chinese automakers.

That’s not to say that local firms won’t still enjoy a number of advantages. For one, switching costs associated with transitioning from internal combustion to electric drivetrains are largely non-existent because for many Chinese consumers, an EV will be their first vehicle. The local automakers also have a better handle on what their customers want, offering tech-laden, customizable EVs at a variety of trim levels (starting at just $4,300) to tech-savvy, price-sensitive, middle-class consumers.

International auto companies will need to tread carefully around any number of hot button topics, freedom and privacy concerns, should they choose to do business in China. GM and BMW, for example, recently became embroiled in a dispute over accusations of forced labor usage in lithium mining in the Xinjiang region. Beijing denied the allegations, characterizing the report as “nothing but ill-intentioned smears against China,” per Foreign Ministry spokesman Zhao Lijian in April. The US has since sanctioned individuals and companies involved in the Xinjiang operation. Lithium mined from the region is used in Tesla battery systems, among others.

Looking ahead, you’ll need to tilt your head back a bit as the Chinese EV market is expected to grow more than 30 percent by 2027. The government’s stringent emissions regulations and growing population are both expected to contribute to the expected demand growth. What’s more, “over the forecast period (2022-2027), the country may also witness growth in the adoption of electric buses,” a recent study from Mordor Intelligence notes. “More than 30 Chinese cities have made plans to achieve 100 percent electrified public transit in the near future,” it continued. And that’s not even including the nation’s battery production capacity, which currently stands at roughly 59 percent of the global market. It too is expected to balloon 7.5 percent by 2027.

Given the robust domestic Chinese market, it may not be long before we see BYD or XPeng brands on American roads, much as they are on the streets of Europe. “I’d imagine it’s only a matter of time before we see more Chinese vehicles being sold in North America,” Morningstar analyst Seth Goldstein told Capital in February.

“Given that EVs are a new powertrain, this is an opportunity for Chinese automakers to establish brands in new geographies where, for years, with the internal-combustion engine, Chinese automakers tended to only sell vehicles in China,” he continued.

The question now is whether China can maintain its pole positioning. Just as Tesla was eventually overtaken by BYD despite enjoying a sizable and lengthy initial lead, Chinese automakers find themselves in much the same position: on top of the heap, but for how long once the likes of GM and Ford come sniffing around with their deep pockets and expansive R&D budgets?

All products recommended by Engadget are selected by our editorial team, independent of our parent company. Some of our stories include affiliate links. If you buy something through one of these links, we may earn an affiliate commission. All prices are correct at the time of publishing.
View All Comments
China's emergence as an EV powerhouse has been a long time coming