At last, the Chromecast is on par with other major streaming devices.

The original Chromecast that debuted in 2013 was a simple $35 dongle. But it was still notable, providing a cheap way to make any TV “smart.” Things have changed a lot since then, however. Not only do a lot of TVs now come with built-in apps, Roku and Amazon developed their own streaming sticks over the years — both of which have remote controls and visual menus for easy navigation. Google’s Chromecast soon seemed outdated by comparison.

That’s no longer the case with the new “Chromecast with Google TV.” At long last, it has a remote control, plus a whole new interface that comes with the company’s Assistant built-in. Combine that with its support for 4K HDR and Dolby Vision, and I believe the new $50 Google Chromecast is not only the best Chromecast yet, but also one of the most value-packed streaming devices on the market. 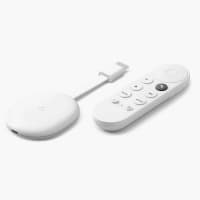 Instead of a stick, the new Chromecast has a similar design philosophy to the puck-like Chromecasts of 2015 and 2016. This time, however, it has a more of an oval pebble-like shape, with a smooth curved finish. On the back of it is a tiny reset button, which is similar to previous Chromecasts. It comes in three pastel shades -- snow (white), sunrise (coral), and sky (blue). The colors don’t really matter all that much since the Chromecast will likely be behind your TV, but they do come with matching remote controls, so that’s something to consider. Even the included AAA batteries are color-coded to match, which I find amusing.

The remote control is easily one of my favorite things about the new Chromecast. It has a curved and compact design that reminds me a lot of the controller for the Daydream View. It feels super comfortable in the hand, and the controls are pleasant to use. There’s a circular navigation D-pad on top, followed by six big round buttons (Back, Assistant, Home, Mute, YouTube and Netflix) and two smaller buttons (Power and Input) underneath. The volume buttons are on the right side. The remote has both HDMI-CEC and IR, so you can control your TV’s power, volume as well as input mode in case you need to switch over to a game console or a cable box for example.

The Assistant button has a different color from the rest of the remote, and you activate it with a long press as you give your voice command. By default, the YouTube button just goes to YouTube’s website, but if you hold down on it, you can customize it to point to YouTube TV or YouTube Music if you happen to have those apps installed.

Like with other streaming devices, all you need to do to get started is to plug the Chromecast into your TV’s HDMI port. However, unlike other streaming sticks that can be powered by a TV’s USB port (like older Chromecasts as well as the Roku streaming stick and the Fire TV Stick), I received an error message warning me to plug it into the accompanying 7.5-watt power adapter instead. According to Google, my TV’s USB port (which is a Vizio M55) just doesn’t have enough power, and the new Chromecast requires at least a 5-watt minimum to function. That’s not a big deal for me, but those looking for minimalist setups might be disappointed here.

As with the previous Chromecasts, you can cast your phone or computer screen to the TV. But why do that when the new Chromecast runs on the Android TV operating system? (The same one you’ll find on devices such as the Nvidia Shield TV and the TiVo Stream 4K.) The difference with the new Chromecast is that it ships with a brand new Google TV interface which is far easier to navigate.

The new menu system looks more like that of Amazon’s Fire TV than the Roku or Apple TV. The first thing you’ll see is the “For You” home screen, which is personalized based on your watching habits. Instead of a wall of apps, there’s a rotating carousel of trending shows up top, represented by bold graphics, followed by smaller rows of shortcut tiles underneath. These rows have category headers like “Top picks,” “Trending on Google,” “Continue watching,” “Your apps,” and a slew of genre and algorithm-generated recommendations. The suggestions on mine included everything from “Comedies” and “Sci-Fi shows” to “Shows about aliens” and “Shows about murder.” That is actually pretty accurate. Good job, Google. I also liked that each show displays the Rotten Tomatoes rating if applicable.

Aside from the “For You” section, the interface is separated out into tabs for movies, TV shows, apps, your library and Live TV. Right now, Live TV essentially acts as a channel guide for YouTube TV and nothing else. Google has said that there’s an API for it and it could potentially work for other live services like Hulu or Sling TV too.

The recommendations are based on the streaming services I’m already subscribed to, which results in a really fantastic assortment of content from all kinds of sources. Those above suggestions, for example, come from Netflix, Amazon, Hulu, HBO and more, and they’re all aggregated right next to each other. This is a stark difference from Amazon’s Fire TV, for example, which tends to bundle up show recommendations under a single service with headers like “Netflix Recommends” or “Prime Originals.” In my opinion, the Google TV interface is better as combining recommendations from multiple services makes for far greater discovery.

Still, I did occasionally see a few recommendations from services I’m not subscribed to, like Sling TV, but they’re few and far between. There are also a few Play Movies & TV options that you’d have to rent or buy. Click on one and you’ll see more details about the show, and then be able to add them to a watch list. What I especially like is that the show page will also list several ways to watch it. The Shape of Water, for example, listed four methods: renting it, buying it, watching it on YouTube TV or watching it on Sling TV.

I should note, however, that renting or buying a show on Google TV can only be done from the Play Movies & TV store. If you wish to rent or buy shows from Amazon and watch it on Google TV, you’ll have to do that elsewhere. As such, there’s no real “universal search” on Google TV, as it doesn’t list every single platform that you can rent or buy a show from. As I said above, however, it does at least show where you can watch it on-demand if you happen to subscribe to a service that it’s streaming on. (Also to be fair, the Fire TV prefers Amazon video services in much the same way; renting or buying shows on Fire TV can only be done from Amazon).

Google TV supports most of the major streaming services out there, such as Netflix, Amazon Prime Video, Disney+, Hulu and more. It also carries HBO Max, which is notable because both the Fire TV and Roku currently don’t. However, Google TV also does not currently support Apple TV+, which isn’t good if you’re a fan of Ted Lasso.

Speaking of which, one of the highlights of the new Chromecast is that Google Assistant integration, which essentially turns my TV into a really big smart display. I can ask it to display the five-day weather forecast, show the live feed from my Nest camera, turn off my Philips Hue lights and play my favorite tunes on Spotify. The Google TV interface also supports Ambient Mode, which lets me display my Google Photos selections when the TV goes to sleep.

But the main thing I used Assistant for was to find shows to watch. So for example, I can move from “Find movies with Bill Murray” to “Play Groundhog Day” in just a couple of steps. I also used it to launch apps like YouTube TV, Netflix and more.

In general, I also find Assistant to be a lot smarter than Amazon’s Alexa. With Assistant, for example, I can say “Go to the A’s game” and it would automatically tune in live to the Oakland Athletics vs. Houston Astros game on Fox on YouTube TV. But with the Fire TV, I would have to ask Alexa to launch a specific channel on a specific service in order to watch the game.

On top of that, if you have a Google Nest Hub in the house like I do, you can also just control the TV entirely with voice commands. Saying “OK Google, turn on the TV” will do that just that, and you can also choose to use “OK Google” commands instead of pressing the Assistant button if you like.

As I mentioned, despite its Google TV moniker, the Chromecast’s underlying OS is that of Android TV. That opens it up to over 6,500 compatible apps, which include options for education, fitness, games and more. Stadia, Google’s game streaming platform, is one of those apps, but unfortunately, it won’t be available on the Chromecast until next year.

On top of all that, the new Chromecast with Google TV supports the latest high-end streaming tech, such as 4K HDR (up to 60 frames per second), Dolby Vision and Dolby Atmos. My soundbar doesn’t support Atmos so I wasn’t able to try that out, but I did think the 4K HDR streams looked terrific, with fantastic contrast and crisp brightness, without any real lag or buffering.

While I generally had a positive experience with Chromecast and Google TV, I did encounter a couple of issues. One is that I wasn’t able to turn off the TV using my Nest Hub -- saying “OK Google, turn off the TV” would just turn the Chromecast off, and not the actual television. It’s not that bad since I can just press the power button, but I still found it odd. According to Google, this is due to CEC limitations with my TV, so your mileage may vary here.

Another issue is that Google TV seems just a touch sluggish occasionally. There were times when launching apps or switching between shows that I saw an empty loading screen. This isn’t a huge deal breaker as it doesn’t happen that often, but it can get a little annoying.

With the remote, new interface and Google Assistant, the new Chromecast with Google TV is finally on par with the Roku Streaming Stick and the Amazon Fire TV Stick. They’re even all priced at around $50. Both the Fire TV Stick and the Chromecast supports Dolby Vision, but Roku does not. Roku, on the other hand, is expected to support Airplay and HomeKit, which isn’t available on the Chromecast, so if you’re more in Apple’s ecosystem, that’s something to consider.

But, if you subscribe to YouTube TV, if you simply prefer Google Assistant, or if you just can’t live without native support for HBO Max, then the Chromecast with Google TV is well-worth looking into.