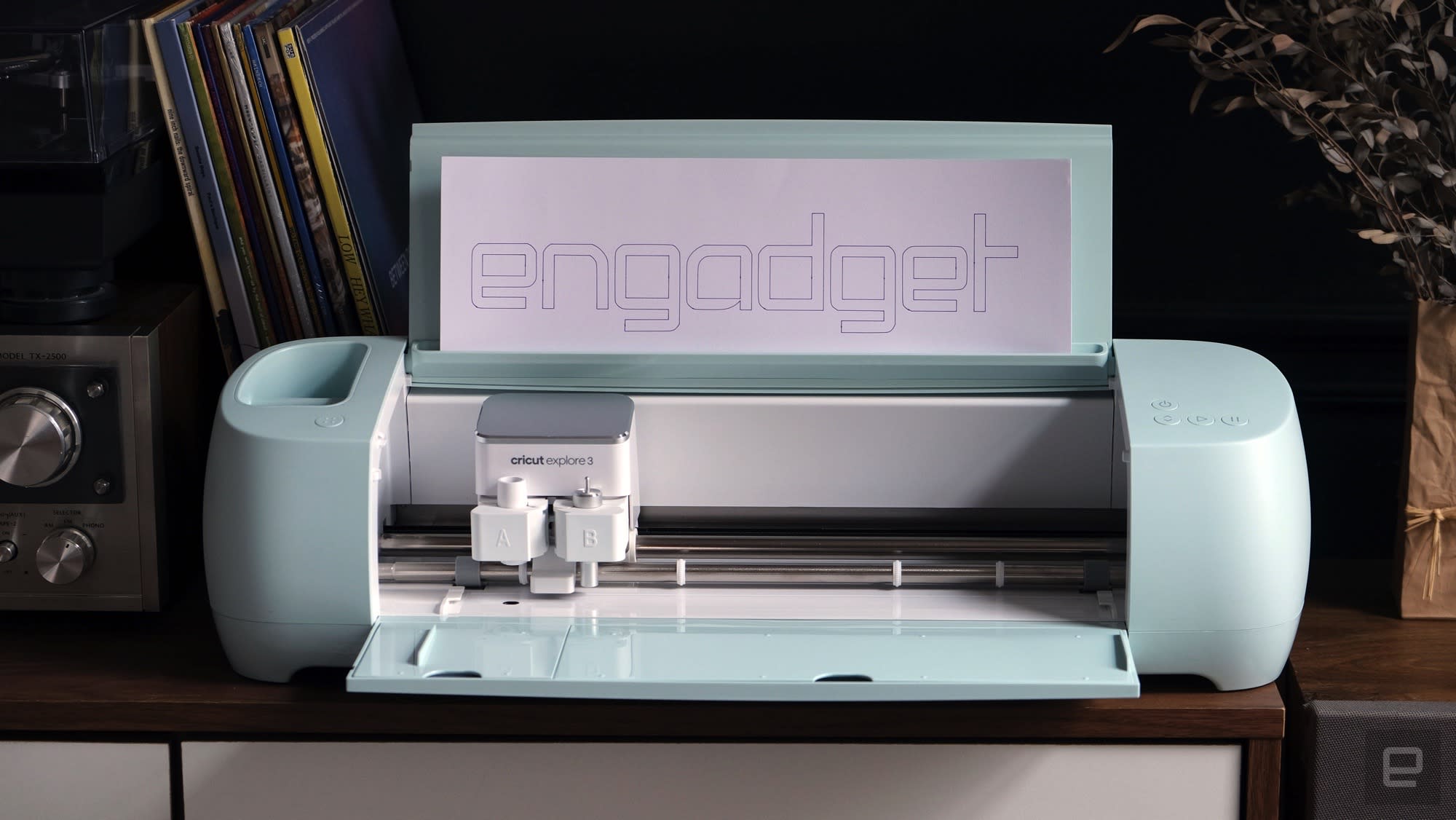 Cricut's Explore 3 is the perfect cutting machine for obsessive crafters

I just wish I was crafty enough to make the most of it.

I was definitely a little out of my element when I took on this review. I’m not really an arts and crafts kind of guy. Sure, I’ll do the occasional project with my four-year-old. I also like to make things (beer, music, small electronics) and generally have a pretty strong DIY streak. But I don’t really traffic in the same mediums as the traditional Cricut crowd: cardstock, fabric, vinyl, et cetera.

This sort of stuff is more my wife’s territory. She made the decorations, bouquets and the invitations for our wedding. She crochets video-game themed blankets. And she made a robot costume out of cardboard and aluminum foil for our kid. So honestly, I was kind of hoping she’d come to the table with a bunch of project ideas to put the $300 Cricut Explore 3 through its paces. Suffice to say, she let me down. (I still love her, though.) So I was largely on my own as I tried to figure out what exactly an Engadget review of a Cricut machine should look like.

I guess to start, we should establish what exactly a Cricut is. It’s basically a desktop CNC machine that’s designed to cut things like fabric, paper and vinyl, as opposed to wood or metal. The whole idea is to let your average DIYer quickly and easily cut intricate shapes and patterns with extreme precision.

The first thing I did: I made a delicate vinyl decal of a mixtape to stick on my laptop. Then I made one to stick on one of my guitar pedals. And a floppy disk decal that I put on top of a canvas board I painted. You get the picture. Basically, I just cut out a bunch of decals.

The process for doing these things is almost idiot proof. The Design Space app (available for macOS, Windows, Android and iOS) where you layout your creations is incredibly simple to use and offers access to over 1,000 free images and over 250 projects, ranging from simple stickers to 3D cardboard masks. And if that isn’t enough, you can pay for a Cricut Access membership (starting at $9.99 a month) that opens up over 200,000 images and “thousands” of projects. Or you can pay individually for licensed content from the likes of Disney, Marvel, Warner Bros. and Sesame Street. Or you can upload your own images.

The latter is pretty simple so long as you stick to line drawings, but it does require occasional cleanup work. For instance, I downloaded a Superman silhouette for my son to color in (he wanted to make his own superhero stickers). But before I could cut it out using the Cricut I had to select and remove the background, otherwise it’d have just cut out a square.

The instructions in the app for predesigned projects are thorough and clear. And that’s even true for relatively complex ones that require multiple cutting tools, markers and several different materials. It walks you through each step as you load a pen to draw on white cardstock, then cut the shape out, before having you swap in a different color card stock and the scoring tool. And for really involved designs, like the 3D cardboard masks, you’ll find a PDF with assembly instructions. (Well, most of the time at least. I only discovered after I cut the pieces for the cardstock fox I tried to build that it had "tips for assembly" as opposed to detailed instructions.)

The more intense projects that call for multiple materials and multiple cuts to be assembled after the fact can feel a little daunting at first. But as long as you don’t try to rush through without reading directions it’s relatively easy to figure out.

The bigger issue is, you end up needing a lot of stuff. The Cricut Explore 3 comes with a fine point blade, other tools such as the scoring stylus and foil transfer tool are sold separately, or as part of a bundle with the Cricut starting at $350 (which, if you’re in the market for one as a newcomer I’d highly recommend). But even if you get a bundle, you’ll still probably need to snag some extra stuff if you want to venture beyond stickers, decals and iron-ons.

See, part of the pitch for the latest Cricut machines is their compatibility with “Smart Materials,” which you’re able to load without using the special mat normally required to hold things in place for cutting. This is, to be clear, a huge advantage. One, it just means there’s fewer variables and less than can go wrong. But it also allows the latest Cricut machines to cut up to 12 feet of material in a single shot, whereas previous versions topped out at 24-inches with a mat. That’s great if you want to create room-covering decals.

The one shortcoming is that all the Smart Materials are adhesive in some form. There’s paper and cardstock sticker options, permanent or temporary vinyl decals, and iron-on. If you want to cut regular cardstock, paper or fabric you’ll still need to get mats, which come in four different levels of grippiness. They’re not prohibitively expensive; most people should be able to get by with the 12x12 variety pack, which includes light, standard and strong grip mats that cost $41. But it’s something to be aware of if you want to make greeting cards, paper banners or some of these undeniably awesome 3D cardboard figures.

If you do get those mats you’ll be greatly expanding the cutting capabilities of your Cricut, too. The Explore 3 can cut over 100 different materials from felt, to foil, to leather and light chipboard. If you spring for the $400 Cricut Maker 3 instead, that number jumps to over 300 materials, including acetate, various types of wood sheets and a host of additional fabrics.

Creating your own designs or projects from scratch is a little more complicated. It’s simple enough to slap a few shapes and some text down on the virtual canvas. But If you want to make your own 3D figures, multilayered greeting cards, or print then cut custom stickers, things get a little more difficult. Frankly, it’s something that’s beyond my skill set.

There are templates in Design Space to help get you started laying out projects. But I found them only minimally useful. They’re basically just generic sketches of objects like bowls, mugs and guitars to give you a rough idea of what your decal or whatever will look like. But they’re not customizable enough to really be relied on for building out a complex design. I used the hoodie template to create an iron-on Spiderman emblem for my son’s Halloween costume. (It was chilly and I knew he wouldn’t want to cover his Spiderman costume with a jacket.) But I was still mostly left guessing when trying to figure out what the final product would look like.

At the end of the day, the most important thing to know about Cricut machines is that they demand patience. Patience to figure out how to use it. Patience to navigate some of the complex projects. And patience to actually put those projects together. (Let me tell you, peeling thin cardstock off one of the mats without tearing it is no easy task.) But, it also feels like magic at times. Watching it as it writes impossibly small and delicate numbers on pieces of cardboard or cuts out intricate designs in vinyl is impressive. Obviously, more complex patterns require more time to cut out, but the Explore 3 is still impressively fast.

Can I say that a Cricut is absolutely worth the investment? No. It really is going to depend on your particular crafting needs and style. I’m not going to use the Cricut every day, or even every week. But I could see once a month dusting it off to customize something for my kid or to put a personal touch on a small project I’ve been working on.

All products recommended by Engadget are selected by our editorial team, independent of our parent company. Some of our stories include affiliate links. If you buy something through one of these links, we may earn an affiliate commission. All prices are correct at the time of publishing.
View All Comments
Cricut's Explore 3 is the perfect cutting machine for obsessive crafters