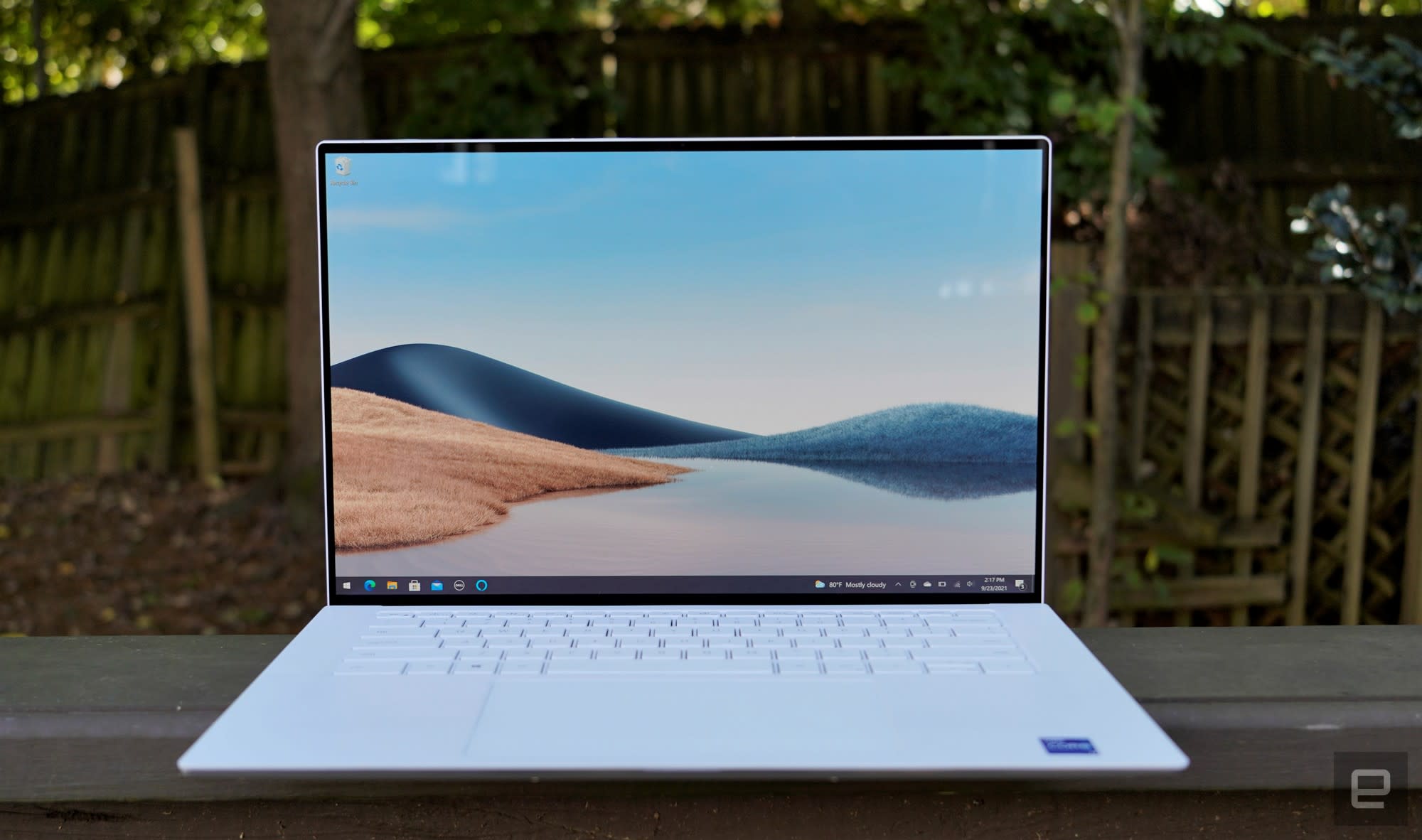 And it's more powerful thanks to Intel and NVIDIA's latest hardware.

OLED makes Dell's already excellent XPS 15 even better. That's it, that's all you need to know. I've seen dozens of OLED screens over the last decade, and they never fail to impress. By their very nature they look bolder and capture inky blacks better than most LCD screens. So take that together with the latest hardware from Intel and NVIDIA, and you've got a surefire ultraportable powerhouse.

Now, if you remember last year's redesigned XPS 15 you'll probably have a hard time telling this new model apart. It still has a sturdy and thin aluminum unibody case, but the star of the show is the 15.6-inch display. It has some of the thinnest bezels on the market, which almost makes the screen seem as if it's floating in the air. New this year is the 3.5K OLED touchscreen model, but you can also choose from two LCD panels: a 4K+ touchscreen and a 1080p+ display. The plus on those resolutions just means they pack a few more vertical pixels to reach a 16 x 10 aspect ratio.

Turn on browser notifications to receive breaking news alerts from Engadget
You can disable notifications at any time in your settings menu.
Not now
Dell

While I'm clearly partial to what OLED adds to the experience, all of the displays should look great. They each support Dolby Vision HDR, and the LCD models are also fairly bright at 500 nits. The OLED version maxes out at 400 nits, but the vastly better contrast should make up for it. It's also the only screen that supports 100 percent of the DCI-P3 gamut, making it ideal for artists who demand color accuracy.

I'll admit: I'm mainly reviewing the XPS 15 to gawk at its screen. As soon as I powered it up, I put on the Matrix Resurrections trailer in 4K HDR just to see if it looked better than my OLED TV. Of course the TV looked better, but I was still impressed by the XPS 15. The glimpses we see at night look truly black, bright elements like explosions and sunlight were so brilliant they made me tear up a bit, and it managed to juggle scenes that had both bright and dark aspects. That's the advantage of OLED.

To push the XPS 15's display to the max, I turned to Ang Lee's Gemini Man, one of the few films viewable in 4K with HDR at 60 frames per second. Say what you will about the movie, but the OLED screen made the shootout between Will Smith and his younger clone feel almost as thrilling as watching it in theaters. Sure, it doesn't have a full 4K resolution, but that's not something you'll really notice while watching it. Another bonus: Dell's upward-firing speakers did a decent job throughout most of the action.

Outside of video, the XPS 15's OLED screen made looking at just about everything a joy. I've never had so much fun scrolling through text-heavy websites — even jotting ideas down in Evernote felt a bit more satisfying, thanks to the ultra crisp text. Photos just about popped off the screen, as you'd expect. The DCI-P3 color range is around 25 percent wider than the more common sRGB, which means images will be able to show off more depth.

The only way the XPS 15's screen could look better was if it took a cue from gaming laptops and offered a faster refresh rate. Going above 60Hz makes scrolling images and text look instantly smoother, but it'll likely be a few years before work-focused notebooks take advantage of that tech.

Our XPS 15 review unit was powered by an eight-core Intel i7-11800H, 16GB of RAM and a 45-watt version of NVIDIA's RTX 3050 Ti GPU. That's on the low-end of that GPU's potential power usage — it can go all the way up to 80 watts — which means it's far less capable than the same card in a gaming notebook. Still, it should be a huge upgrade from last year's GTX 1650 Ti. In the GPU-focused Geekbench 5 Compute benchmark, for example, the XPS 15 notched around 6,000 more points than last year's model.

I can't imagine too many people will be judging the XPS 15 on its gaming capabilities, not when you can get faster screens and potentially better hardware for similar prices from dedicated laptops. But if you're just itching to get a bit of Overwatch action in once in a while, it's good enough to reach 70fps in Overwatch at 2,560 by 1,600 (1,440p+) at the highest graphics settings. Honestly, it has enough power to tackle most modern games. Just don't try playing them at 3.5K.

The XPS 15 also scored around 50 percent higher in the PCMark 10 benchmark, something I'd attribute both to that Intel CPU and the NVIDIA hardware. You can expect it to tackle most intense workloads with ease. It managed to transcode a one-minute 4K video file into 1080p in 35 seconds using Handbrake and the NVIDIA encoder.

As for the XPS 15's keyboard and trackpad, they're unchanged from last year. I appreciated the keyboard's wide layout and responsive keys, though I hope Dell explores ways to add even more depth. It'd be nice for some of that CherryMX technology from Alienware's gaming laptops to make its way to the XPS line. The trackpad, meanwhile, is luxuriously smooth. No complaints there.

I'd like to see more than three USB-C ports, but at least two of them support Thunderbolt 4. And I'll always give a laptop extra credit for including a full-sized SD card slot. That's something photographers everywhere will appreciate. I was also surprised to find that the OLED screen didn't ding the XPS’s battery life as much as I thought it would. It lasted for nine hours and 55 minutes in our battery benchmark, compared to 10 hours and 10 minutes on last year's model with a 4K+ LCD.

The only downside of the XPS 15 is that Dell was a bit slow to add OLED. Remember, the company said OLED would be coming to the XPS 15 since CES 2019. I was surprised that Dell didn't include it in the XPS 15's redesign last year and I wager the pandemic slowed things down a bit. But other PC makers, like ASUS, were much quicker to build OLED laptops, so it’s hard to make excuses for Dell.

The new XPS 15 starts at $1,300 with a Core i5 processor, integrated graphics, 8GB of RAM and a 256GB SSD. You'd have to shell out $2,000 to nab our review unit with a 512GB SSD. Those are reasonable prices for 15-inch workhorse machines, especially when the 16-inch MacBook Pro is a rather painful $2,400 and still has an aging ninth-gen Intel chip.

Honestly, I didn't expect Dell to do much with the XPS 15 after last year. But the addition of OLED goes a long way. It's one of the best screens you can find on a laptop today. It's so good, in fact, that it makes the XPS 15 almost perfect.

All products recommended by Engadget are selected by our editorial team, independent of our parent company. Some of our stories include affiliate links. If you buy something through one of these links, we may earn an affiliate commission. All prices are correct at the time of publishing.
View All Comments
Dell XPS 15 OLED review: A practically perfect 15-inch laptop