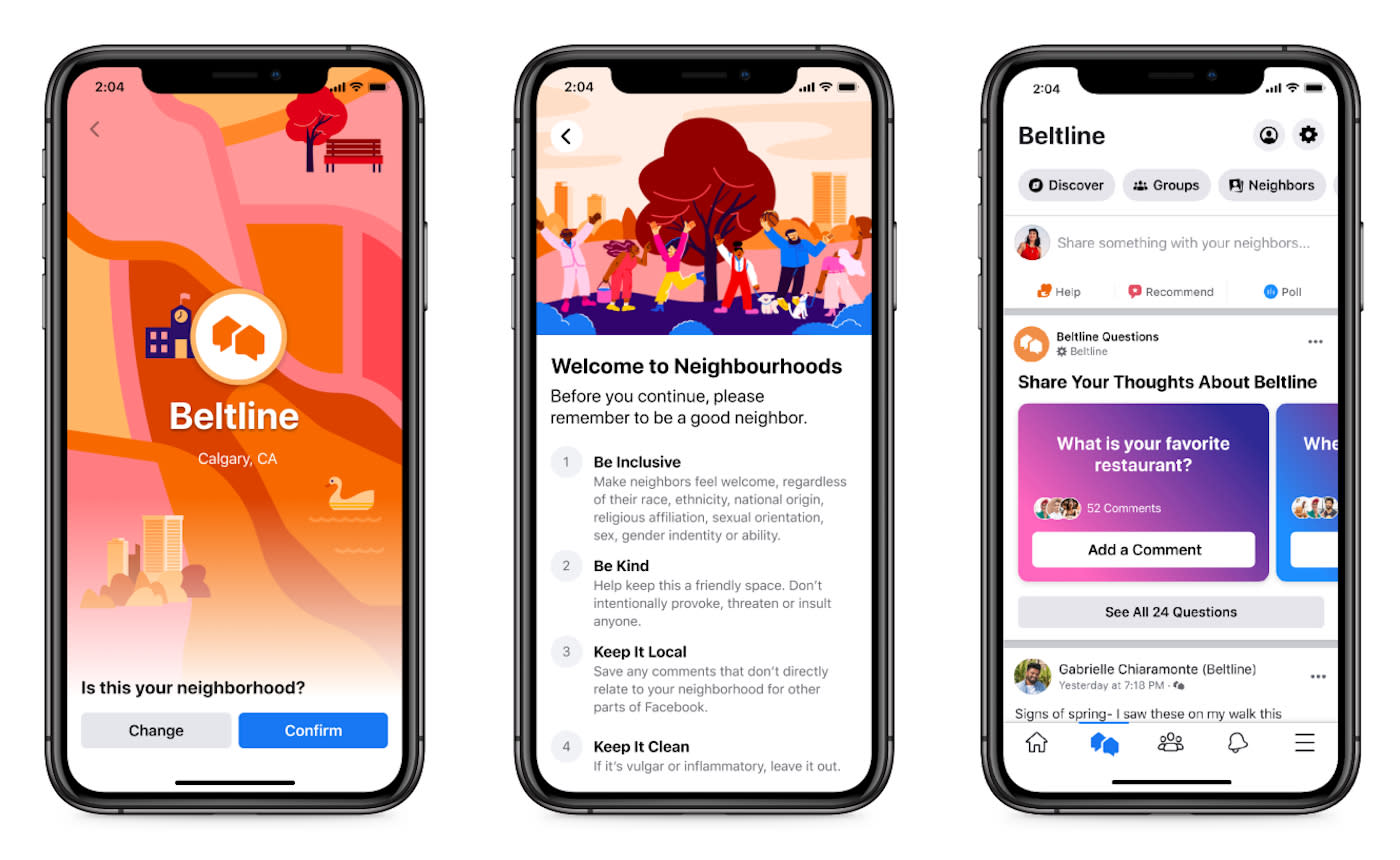 Facebook sets its sights on Nextdoor with new Neighborhoods feature

It's now live in Canada and will roll out in select US cities soon.

Facebook is testing Neighborhoods, a Nextdoor-like feature that gives you a way to join community-based groups, in Canada. The company will expand its availability to select US cities "soon," as well. People started seeing glimpses of an early version of the feature last year, and the social network admitted at the time that it was indeed testing such a tool. Now, Facebook has detailed what Neighborhoods can do for you in a post by product manager Reid Patton. Simply put, the feature is a dedicated section for groups, which can help you connect with the local community and find new places to explore nearby.

"People have always used Facebook to connect with their neighbors... Throughout the pandemic and especially in the past year, we’ve seen just how crucial these connections can be. Facebook Neighborhoods makes it easier to do this, bringing the local experience across Facebook into one place."

When you get access to the feature, you'll be able to join a Neighborhood (or "Neighbourhood" in Canada) group for your own town, as well as groups for surrounding towns. You can create a special Neighborhoods profile that's different from your main one if you want neighbors to know only certain things about you, but you'll have to be 18 and above to be able to join. If you're looking to find people with shared interests, you can find groups for specific activities (say, video or board gaming) or create your own that will be accessible within the Neighborhood tab.

The section will also have a Recommendations feature where you can find suggestions from the community for local places to explore. You can vote on polls for your favorite places and businesses in the area, as well, or check out what others are voting for if you're new to the neighborhood.

Facebook will show a screen reminding you to be kind and inclusive when you join a group. "Make neighbors feel welcome, regardless of their race, ethnicity, national origin, religious affiliation, sexual orientation, sex, gender identity or ability," the notice reads. Neighborhoods will have moderators to police posts, and users will be able to report posts, which Facebook could remove if they truly violate the website's community guidelines.

That Patton's introduction to Neighborhoods discusses the new feature's moderation and safety measures does't come as a surprise. A lot of people use online platforms to spew racism and hatred, and companies have to think of ways to deal with the issue. Nextdoor, for instance, recently introduced "anti-racism notification," which pops up if it detects phrases such as "All Lives Matter" or "Blue Lives Matter" and will prompt the author to reconsider using such language. Last year, the service also pulled the "Forward to Police" feature, since it was being used to make racially-biased reports.