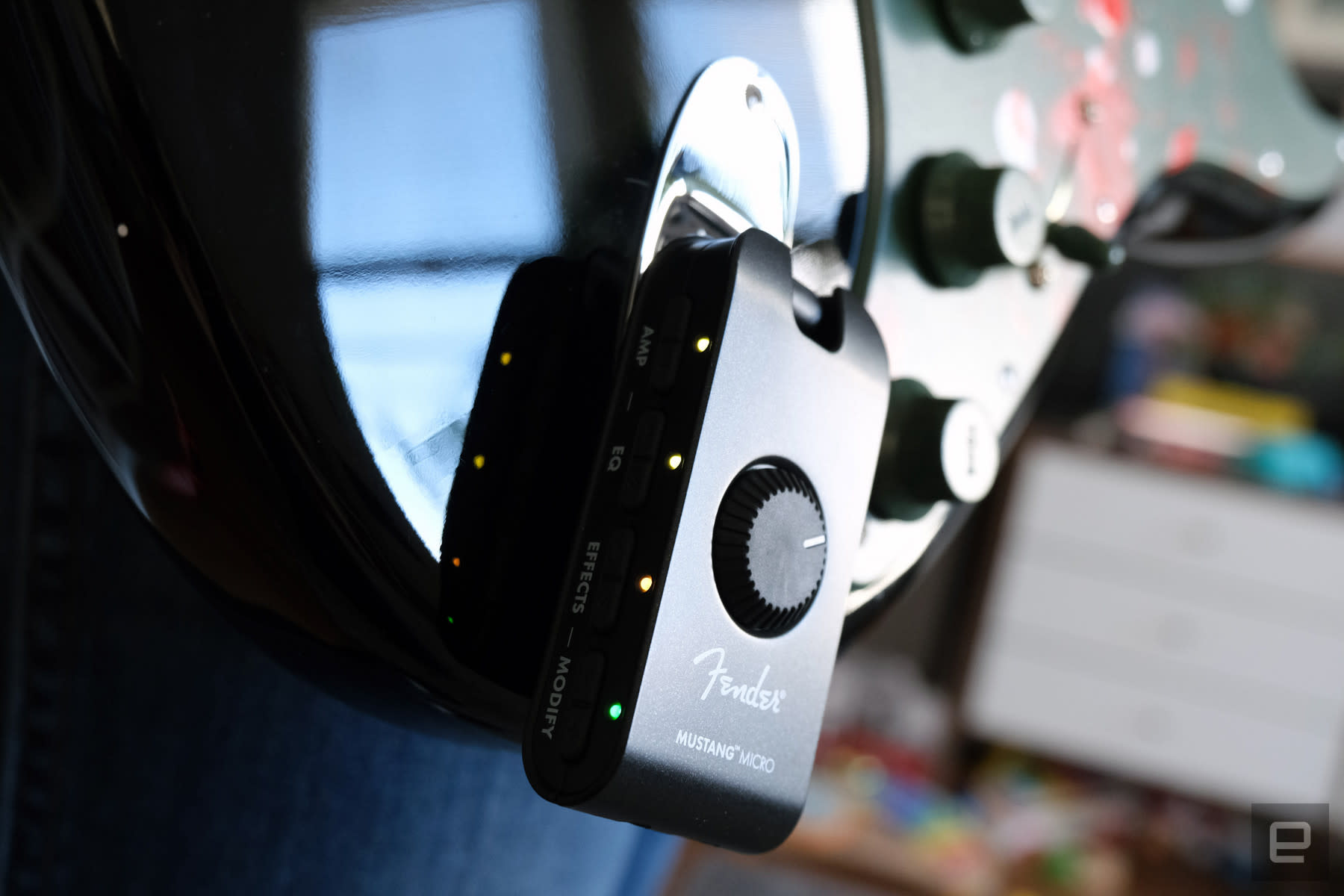 The $100 headphone amp gets excellent clean tones, but struggles with high gain sounds.

The Fender Mustang series of guitar amps are popular choices for at-home practice. They’re reasonably priced, and pack a ton of emulated amp and effect options. The 25-watt Mustang LT25 is even quiet enough to play around the house without pissing off your significant other or roommate. But, it’s still probably not a great idea to fire it up at night. It will definitely wake a restless baby. Fender’s solution is the Mustang Micro a headphone amp that packs the modeling chops of its bigger brothers.

Now, there are plenty of headphone guitar amps out there. But most of them are pretty underwhelming. The only one I’ve tried that has managed to grab my attention was the Boss Waza Air, which, while interesting, are a bit gimmicky and extremely expensive at $420. The Mustang Micro splits the difference. At $100 it’s more expensive than most headphone amps, but it also has a lot more modeling power under the hood.

Physically, it’s not that different from many other popular models like those from Vox. It plugs directly into your instrument with a swiveling connector that fits almost any guitar regardless of where the jack is or how it’s angled. There’s a big volume knob on the front and a series of rockers on top for controlling the various features. The bottom switch turns the device on and off and enables Bluetooth, while you’ll find the headphone jack and USB-C port opposite the connector. The USB port is used to charge the battery, which can last for up to six hours depending on volume and whether or not you're using the Bluetooth. But it can also be used as an audio interface for directly capturing audio on your computer. Though, I was unable to get that feature to work.

Inside the Mustang Micro couldn’t be further from the $50 one-trick ponies littering Musicians Friend. To start, there are 12 different amp emulations on board (well, depending on how you count). Other than the Waza Air most headphone amps have a single model at their disposal, though some have multiple “channels” with different gain levels. Similarly, the selection of effects on the Mustang is larger.

It’s worth noting that the Mustang Micro gives up some fine-grained control to offer a broad selection of tools. For example, the tone / EQ control simple has five preset voices ranging from darker to brighter. And each of the effects has just six levels ranging from off to over the top. You’ll also notice that all of the effects are paired with reverb. This isn’t necessarily a bad thing, as a bit of reverb is necessary to put a little space between you and the sound. Otherwise, the blasting raw guitar into your ears can get painful. But it does mean if you want chorus without a touch of reverb you’re out of luck.

Unlike basically any of those other small headphone amps, the Micro also has Bluetooth support. Now, you can’t connect headphones, because the latency would be too much for a satisfying playing experience. But, you can use it to stream backing tracks and songs for you to play along with. This might seem minor, but it’s actually a huge deal. A headphone amp is mostly getting used for practice purposes and there’s a good chance you’re going to be practicing along to a metronome at the very least.

Features wise, then, it definitely makes the case for the $50 premium over many of its competitors. But, like any piece of music gear, the most important thing is how it sounds. And, I’ve got to say, I’m shocked by how good some of the settings are.

No surprise, but the Fender emulations are the best sounding of the bunch. They’re definitely not going to fool a seasoned player, but they get close enough on the broad strokes that ‘65 Twin, ‘65 Deluxe and ‘57 Twin are all identifiable if you know what you’re looking for. They do everything from sparkling clean to light breakup depending on your guitar’s volume and tone settings. Even the Vox AC30 (here referred to simply as ‘60s British) is pretty decent.

Predictably, though, the higher gain stuff is a bit hit or miss. While clearly tonally different, the Uber, Metal 2000 and FBE-100 emulations are all similar enough that I’d happily trade one or two of them for a bit more middle ground distortion. Sounds here jump pretty quickly from clean to nu-metal. And then basically stay there. In fact, the ‘90s American amp (a Mesa Dual Rectifier) specifically calls out its nu-metal chops, and that’s not even one of the “high gain” models here.

Honesty, I don’t have much use for anything beyond that in terms of gain anyway. The ‘90s American does fine for stoner metal and big riff rock like Soundgarden. But everything after that just kinda sounds like you tweaked the EQ on a Slipknot record to my ears. Well, except the BassBreaker 15, which might be my least favorite option. It has a very ‘80s hard rock vibe, but I bet it’s great if you’re really into finger-tapping solos.

I’m less into the effects than I am the amps. The spring reverb and both tremolo sounds are solid, as is the slapback delay. But all the modulation effects are a bit too cold. Too… wooshy. They all have a slightly harsh edge to them that makes it sound like you’re listening to a seashell. This is where the limited controls and preset levels become an issue. I can’t dial in the depth and rate I want on the chorus, I just have to take whatever Fender gives me. And you only have control over one parameter for each of the 12 effects options. So the chorus and reverb selection gives me five options for chorus depth, but no control over anything else.

In short, don’t buy the Mustang Micro for the effects. But do consider it if you want a quiet way to practice at night and are really into Fender amp tones. Digital emulations of tube amps are never going to be perfect, but Fender is continuing to prove that when it comes to big name guitar makers, they’re at the cutting edge.