The Waza Air are proof that playing guitar through headphones doesn't have to suck.
T. O'Brien|01.03.20
@TerrenceOBrien

There are very few objective truths out there that everyone can seem to agree on. But one of them is most certainly the fact that playing guitar through headphones sucks. Whether you're using a dedicated headphone amp (which often look like relics from the 1980s) or just plugging your trusty over-ears into a tube amp that would wake the neighbors even at the lowest settings, the experience is underwhelming at best. A number of companies have tried different things to try to improve the situation, but Boss' Waza Air are probably the most novel I've seen. For one, this is the first time I know of that a company built a guitar amp directly into a set of headphones. And secondly, the Waza Air includes some pretty unique features that make it feel more like you're listening to an actual amp in a room, rather than just blasting a raw guitar signal into your ears. 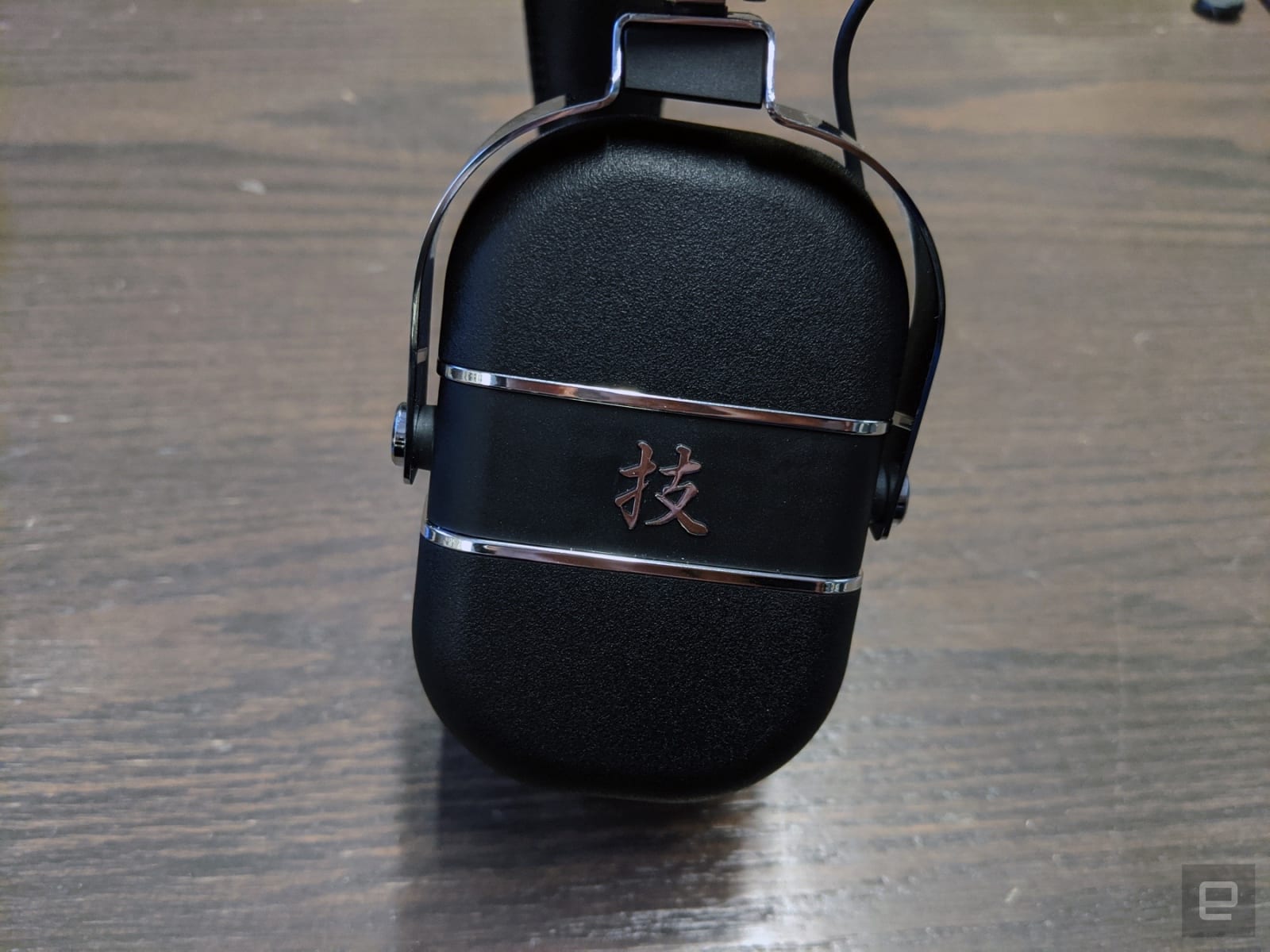 At its core, the Waza Air is basically a wearable version of the beloved Katana amp. There's five amp models built-in plus over 50 effects all pulled from the Katana lineup. There's two parts in the package: the headphones and a wireless transmitter that you plug into your guitar. (Or any other instrument with an audio out jack.) And both the headphones and the transmitter have built-in rechargeable batteries. Which means you'll have everything you need to play, including a huge selection of virtual effects pedals, right out of the box without the need for cables.

If you're familiar with the Katana lineup (which I've whole-heartedly endorsed before) then you know what to expect here. The amp simulations sound great and the effects are based on classic Boss stomp boxes. When stuffed inside a $230 50-watt amp, it's the best bargain in tone town. It is, however a little different when inside a pair of $400 headphones. The amps and effects still sound solid, but having them pumping directly into your ears certainly draws attention to some of the weaker elements of the digital modeling. And the price difference cuts into the bang-for-the-buck equation. Still, it's hard to argue with the flexibility afforded here. Through the Boss Tone Studio app you can combine up to three different effects at a time, tweak your EQ and select your amp of choice. 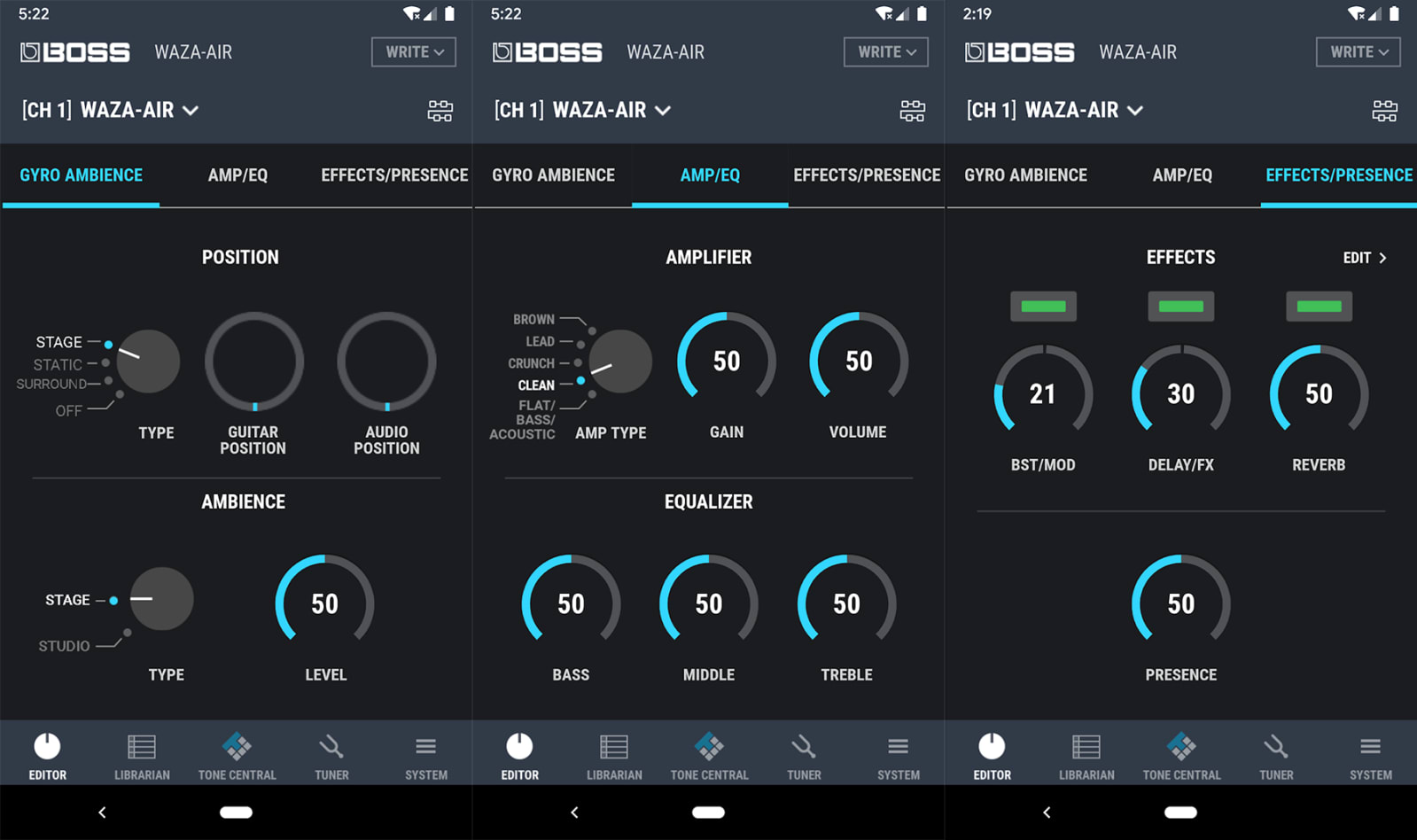 Of course, the big draw here is that the Waza Air is supposed to simulate playing through a real amp in a room. The effect relies on two main ingredients: reverb and positional audio. The reverb effect isn't that unique, and others have tried it. The goal is to try and recreate the natural ambience and presence of sound waves bouncing around a room. At it's best the effect is subtle and the Waza Air do a decent enough job of giving the illusion that the guitar amp isn't just blasting directly into your ear drums. Meanwhile the positional audio tries to place amp in a specific place inside the virtual room, using some algorithmic tricks. 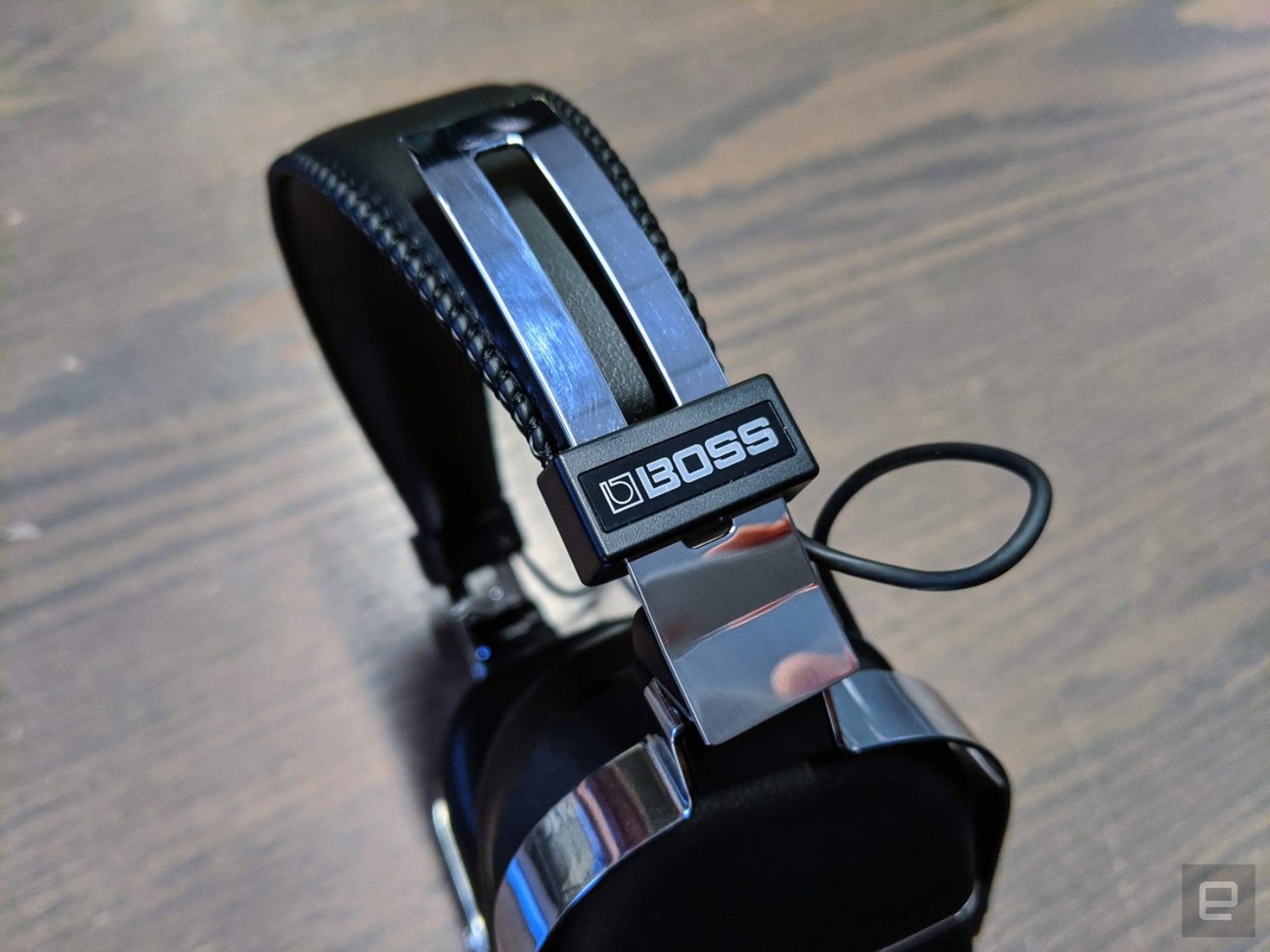 There are a few different modes and settings all with distinct pros and cons. There's stage, static and surround modes for the positioning, and a choice of stage or studio ambience within each. Surround mode puts the virtual amp roughly in front of you at all times, but in general doesn't rely on positional tricks that much. Instead the sound envelopes you. That combined with the studio ambience setting was actually my favorite of the bunch. With the level set to around 20 or 25, the difference between just playing a guitar through normal headphones and through the Waza Air is subtle, but noticeable. Without the aid of some sort of cabinet simulation, whether through a pedal (such as Neunaber's Iconoclast), amp or a software plugin the sound can be overbearing and honestly a bit exhausting for your ears. The Waza Air creates enough virtual space between you and the guitar that it doesn't feel like you're punishing your brain.

Boss attempted to make things even more realistic with the static and stage modes. Let's start with stage, which is meant largely for practicing along to backing tracks. You can queue up your favorite song, stream it via Bluetooth from your phone and then jam along with it. And the stage positioning puts your amp and the virtual band behind you, which more accurately represents what it's like to perform live. (Unless you're the sort of weirdo that likes to play with their back to the crowd, eyes locked with the drummer the whole time.) The actual placement of the audio is pretty convincing, and you can tweak the positioning so your amp and the rest of the band are in different locations. Just know that the ambience options don't really up the realism factor here. Studio is simply too tight to convincingly recreate anything than the smallest of clubs. And stage is so cavernous that even at low levels it sounds like you're doing sound check to an empty room. 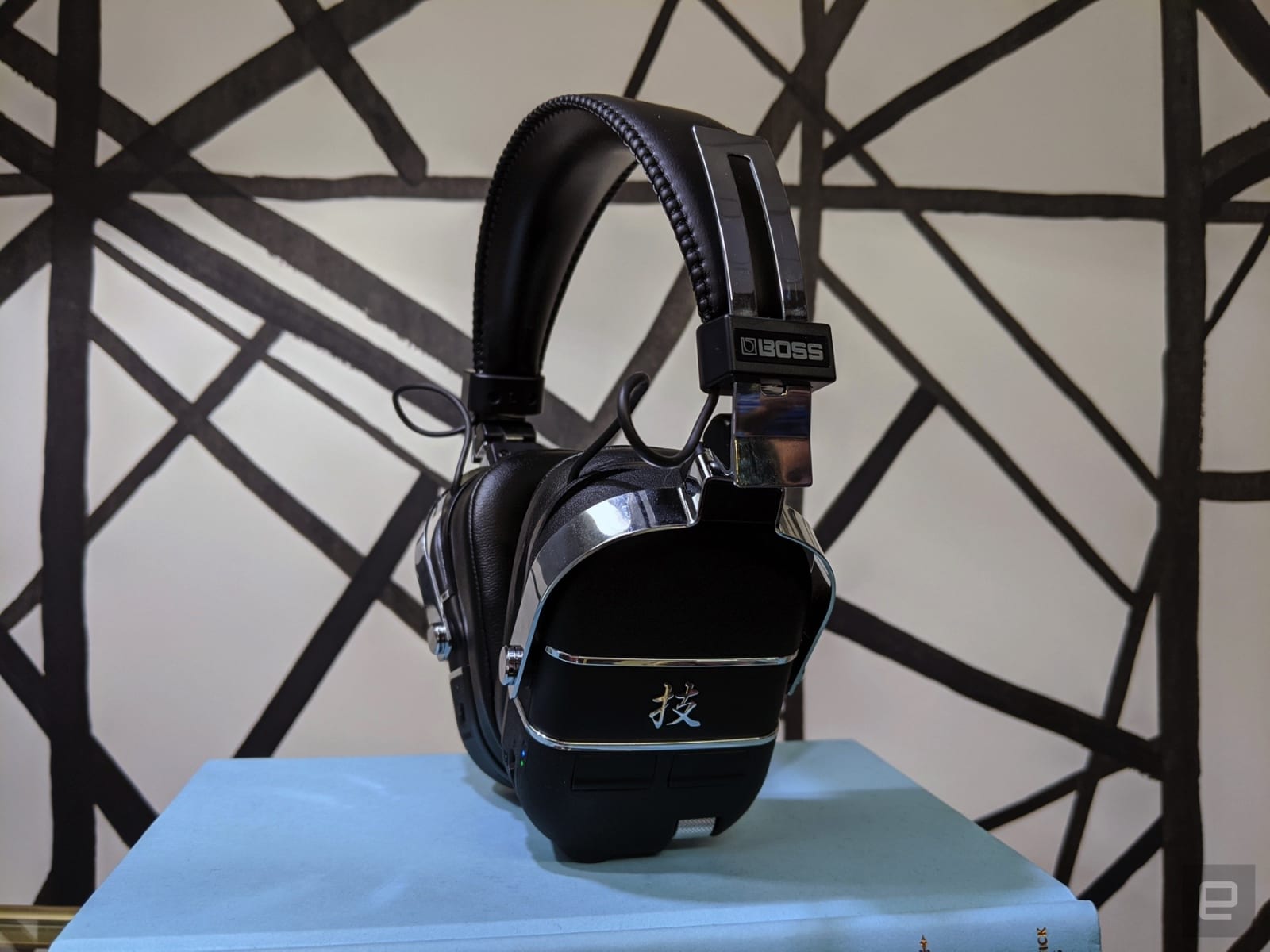 Static on the other hand, plops a virtual amp down in a specific location and leaves it there. So that as you move your head, the direction the audio is coming from changes. The Waza Air have a gyroscope inside to sense your head movement. At first blush the feature is pretty cool, but the gimmick kinda wears off quickly. The headphones simply can't simulate a sense of vertical space, so the effect is like having an amp at exactly head level. And, essentially, all that is happening is the guitar signal is panned either left or right depending on how you turn your head. It's a neat trick, but not one that I can imagine using that often. Especially since, I'm unlikely to be moving about much if I'm playing through headphones anyway.

The other big consideration is comfort and fatigue. The Waza Air are pretty cozy and lighter than you'd expect them to be. Though, they're hardly feather weights. They borrow a lot of engineering knowhow from V-Moda, another Roland company (along with Boss) which certainly helps. They don't quite match up to some of the classics in the studio monitor world, like Sony's MDR-7506, but there's also a lot more tech crammed inside the Wazas. My one complaint after wearing them for about 30 minutes straight was that they were a tad warm and I was starting to get a little sweaty around my ears. 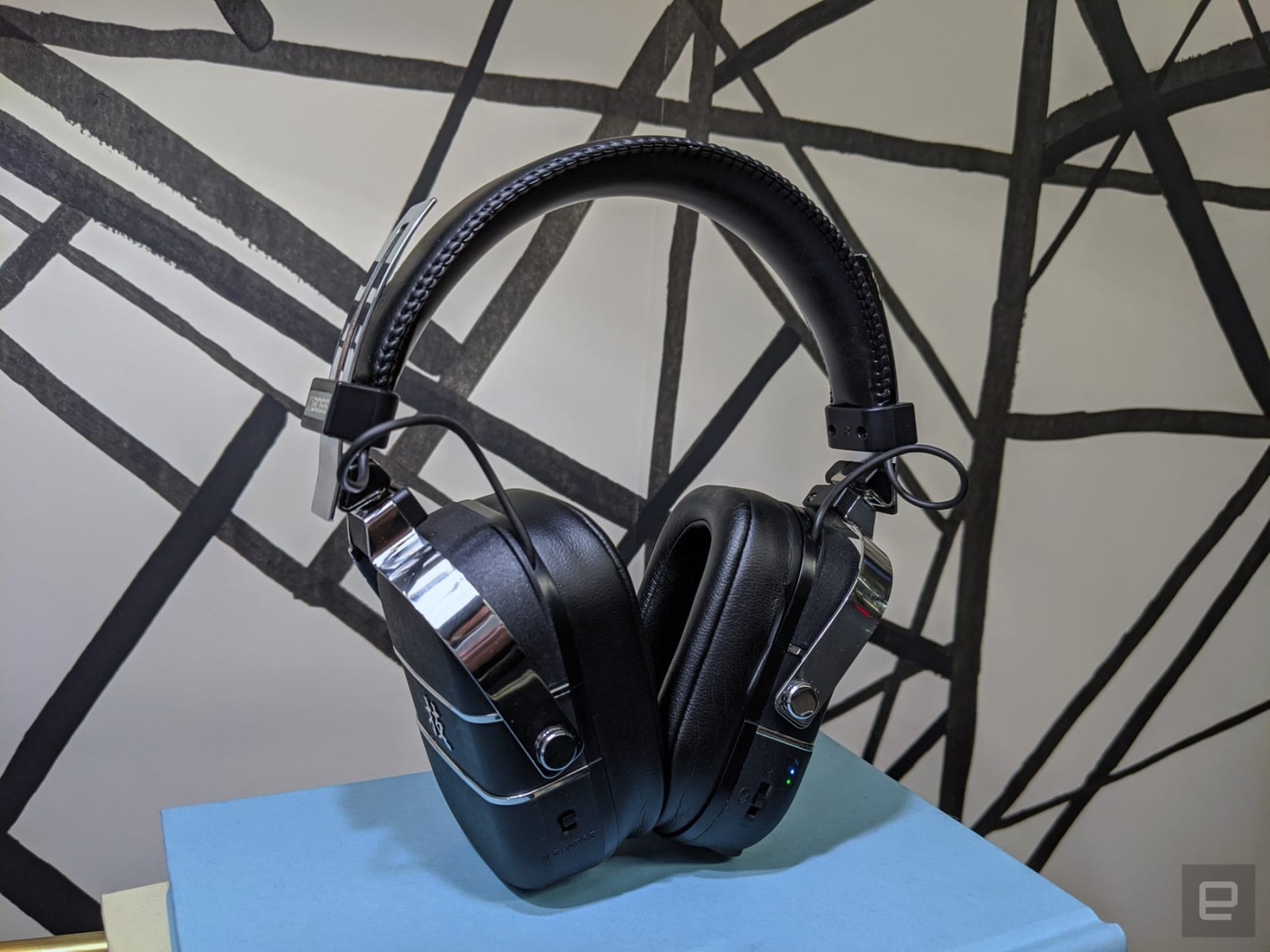 But, be aware that there is no way to get the sound you hear in the headphones to the outside world. There is no audio out, or ability to stream audio from the Waza Air. These are meant for quiet solo practicing and nothing else.

This is where the price point becomes a slight issue. $400 is a lot to ask for a pair of headphones designed specifically to use as a guitar amp. Sure, you can also use them as regular Bluetooth headphones, but battery life isn't great (five hours), there's no noise cancellation and frankly it's overkill for just listening to tunes. These are really only going to appeal to a very select group of people. If you already have a main amp, need a second (or third) option that won't wake the neighbors or your new born, and wireless is a priority for you, then maybe the Waza Air is worth looking into.