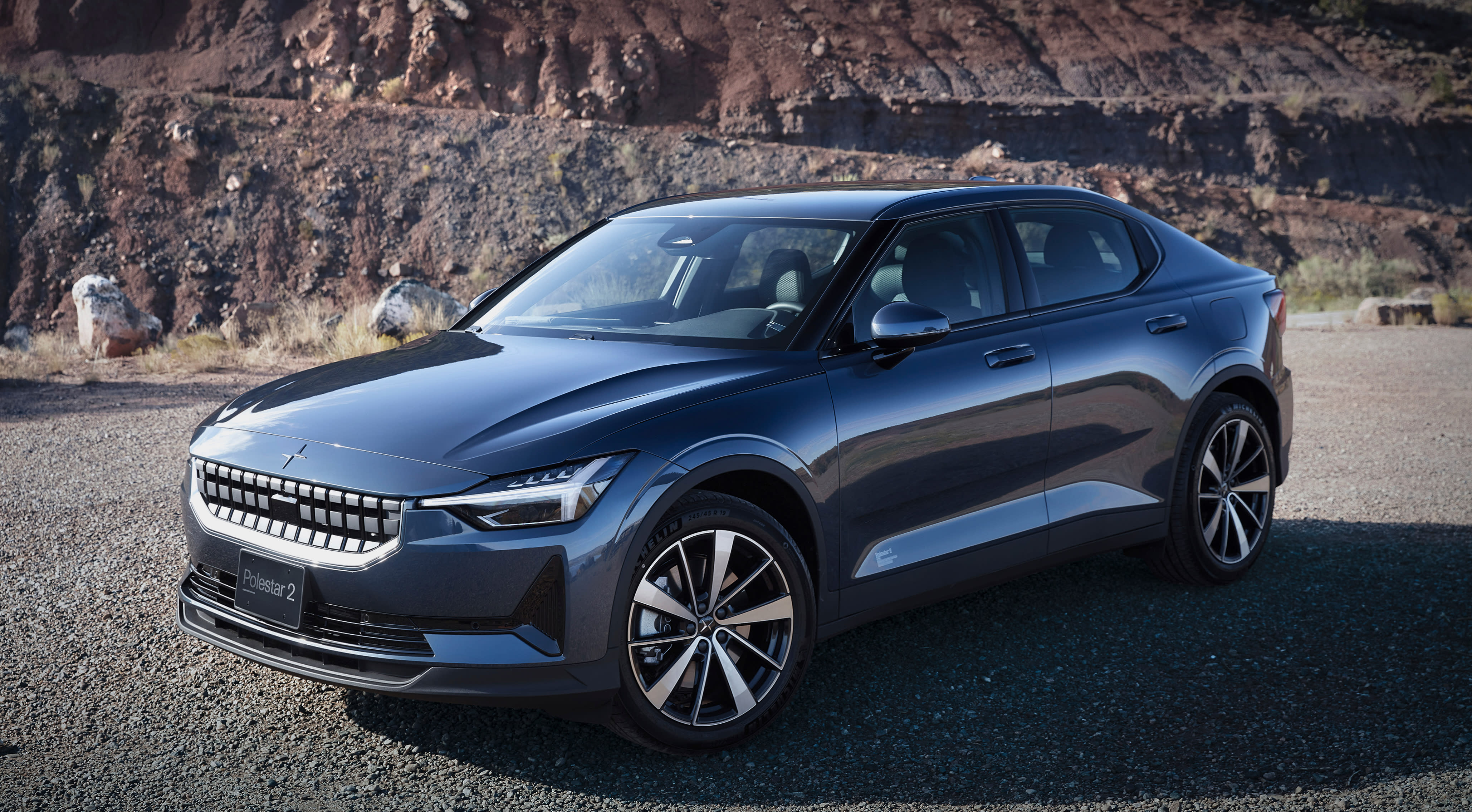 For Polestar, the twos are anything but terrible

As the company enters its second model year, the Polestar 2 gets a long range FWD variant.

Sky’s too big in New Mexico.

I’m a dozen miles outside of Santa Fe, heading West on the 502 towards Los Alamos in a borrowed 2022 Polestar 2 that won’t quit begging my right foot to gain a few pounds. Damned if I can’t stop staring at the horizon. In a futile effort to overtake me, stacks of clouds race across an azure backdrop spanning the Earth’s curvature.

“It’s just so big,” my mind protests after 18 months of indoor pandemic living.

My right foot, ever loyal, finds the floor. Away we go, the overhead world a fading memory as the horizon rushes forward to meet us.

With the Polestar 1’s production run ending in December and both the 3 and Precept without firm release dates, the Polestar 2 I’m driving is the current crown jewel of the company’s burgeoning model lineup. The Polestar 2 Launch Edition arrived last year with every bell and whistle the company could manage to pack into its frame. For the 2022 model year, Polestar is taking a different tack by splitting the vehicle’s bevy of features into optional packages fitted onto a surprisingly well-appointed — and inexpensive — base mode.

Both variants will offer a $4,000 Plus Pack, which includes a full-length glass roof, "premium" interior including a 600W Harman Kardon stereo, powered seats, cabin illumination and the addition of a heat pump that uses waste energy from the drivetrain to heat the cabin interior and battery pack on cold days (while also improving range by up to 10 percent under certain climate conditions).

The 2022 base models will come outfitted with a new, vegan “embossed textile upholstery” while the Weave-Tech covering found in last year’s Launch Edition is now included in the Plus Package. If you’re hankering for real leather, that is available but comes at a premium price point. If you want the metallic Magnesium, Midnight, Snow, Moon, or Thunder paint options, they’ll set you back an extra $1,200.

The $3,200 Pilot Pack incorporates Advanced Driver Assist features like adaptive cruise control, blind spot warnings and a 360-degree camera. Only the AWD version, however, will have access to the $5,000 Performance pack which adds 20-inch alloys, Brembo brakes, sport tires, and upgraded suspension components. You’ll be able to spot Polestars with the performance pack by their bright yellow cosmetic accents on the brake calipers, seatbelts and valve caps. There is also a “blacked-out” option that eliminates all the chrome and colored exterior accents if you opt for the “Void” color scheme.

Regardless of the packages included, both Polestar variants run off the same 400V electrical architecture and 78 kWh (75kWh usable) capacity battery pack. The company has squeezed a few additional kW of charging capacity, 155 kW up from last year’s 150 using just software updates, for the 2022 models dropping the amount of time needed to refill from 10 percent charge to 80 percent to just 33 minutes. On a standard Level 2 AC charger (like what you'd have installed in your home), you’re still looking at around 8 hours to fully repower the vehicle.

Compared to last year’s model, the 2022 Polestar’s interior appears largely unchanged. An 11-inch central infotainment display running Android Automotive still dominates the vehicle’s minimalist dashboard. Rather than tethering or mirroring content from your mobile device, drivers will be able to log into the vehicle’s OS directly, granting them access to their Google accounts, contacts and the Google Play Store as well as natively running Google Maps, Spotify, YouTube Music and others.

Installing new apps is a cinch, a nearly identical process to doing so on your smartphone. Each new Polestar comes with 3 years of included access to Google Service Connectivity and LTE capability from AT&T. The company anticipates that a steady stream of OTA updates will help keep the Polestar 2’s features and performance continually up to date. Polestar also plans to extend its latest OTA service to the 2021 model year so Launch Edition vehicles will enjoy the latest and greatest in software updates.

At 5,312 feet above sea level, Albuquerque, New Mexico is among the highest of America’s metropolises, though it is outclassed by state capital Santa Fe, an hour to the northeast and 7,199 feet high, where I spent last Tuesday putting both Polestar iterations through their relative paces. At more than a mile above sea level, the air is so thin that conventional internal combustion engines (ICEs) can lose as much as 30 percent of their power output (roughly a hundred HP). Thank goodness battery electric vehicles (BEVs) like the Polestar have no need for triflings like oxygen. No matter how high it climbed, every last one of the FWD Polestar’s 231 horses remained available — still chomping at the bit, if you will.

Snapping awake from an unplanned anaphylactic nap, I find myself charging through the rolling hills of New Mexico State Road 4 while it winds its way through the Valles Caldera National Preserve. Of course, because it’s being pulled along by its leading axle, the FWD Polestar 2 does tend to swing wider through turns (as front drive vehicles are wont to do) compared to its AWD cousin, which led to a couple of hair-raising encounters with oncoming vehicles who were themselves shading the narrow two-lane’s centerline.

“If you are thinking of flying a drone to take video of the car near Los Alamos National Lab,” Polestar PR warned us before we took off for the initial test drive. “Don’t. The government has been known to shoot them down.”

So instead, here’s a picture of the W80 that was awaiting us at the National Museum of Nuclear Science and History at the end of the drive’s initial leg. Coffee, snacks and selectable-yield thermonuclear warhead displays, oh my.

The choice between the FWD and AWD versions of the 2022 Polestar 2 is not an easy one. For nearly all intents and purposes, the two are functionally identical both inside and out. The question you’ll have to answer for yourself is whether you want a fast, sporty and stylish ride with 265 miles of range or whether you want to trade in 16 of those miles for an extra 177 HP of head-snapping acceleration.

It’s mid-afternoon and I’m hill-climbing the absurdly tall, 10,000-foot high mountain that leads Ski Santa Fe. It started raining about 20 minutes ago, the temperature is dropping, and that gentle pitter-patter of formerly refreshing precipitation is now doing its best to become a Class 3 Kill Storm. When I raced along Skyline Blvd in 2019, the skies were clear and my right foot was a rotund demon with 408 Launch Edition horses at its beck and call.

Today, the skies were crying and the roads were revolting, but had just as much power at my disposal with the AWD Polestar 2’s accelerator pedal underfoot. It’s raining, it’s hailing, it’s snowing, minor landslides are depositing forearm-sized stones into the roadway. The Polestar barely seemed to notice the hazards — easily forging through spontaneous road rivers, slush piles, and newly laid rock beds — while charging up the tightly winding hillside. One flick of my right foot and away we go, ever onward, ever upward, and ever faster, just as soon as the Chevy Tahoe ahead of me decides to pull off into its campsite and stop crawling along at 15 goddamn miles an hour.