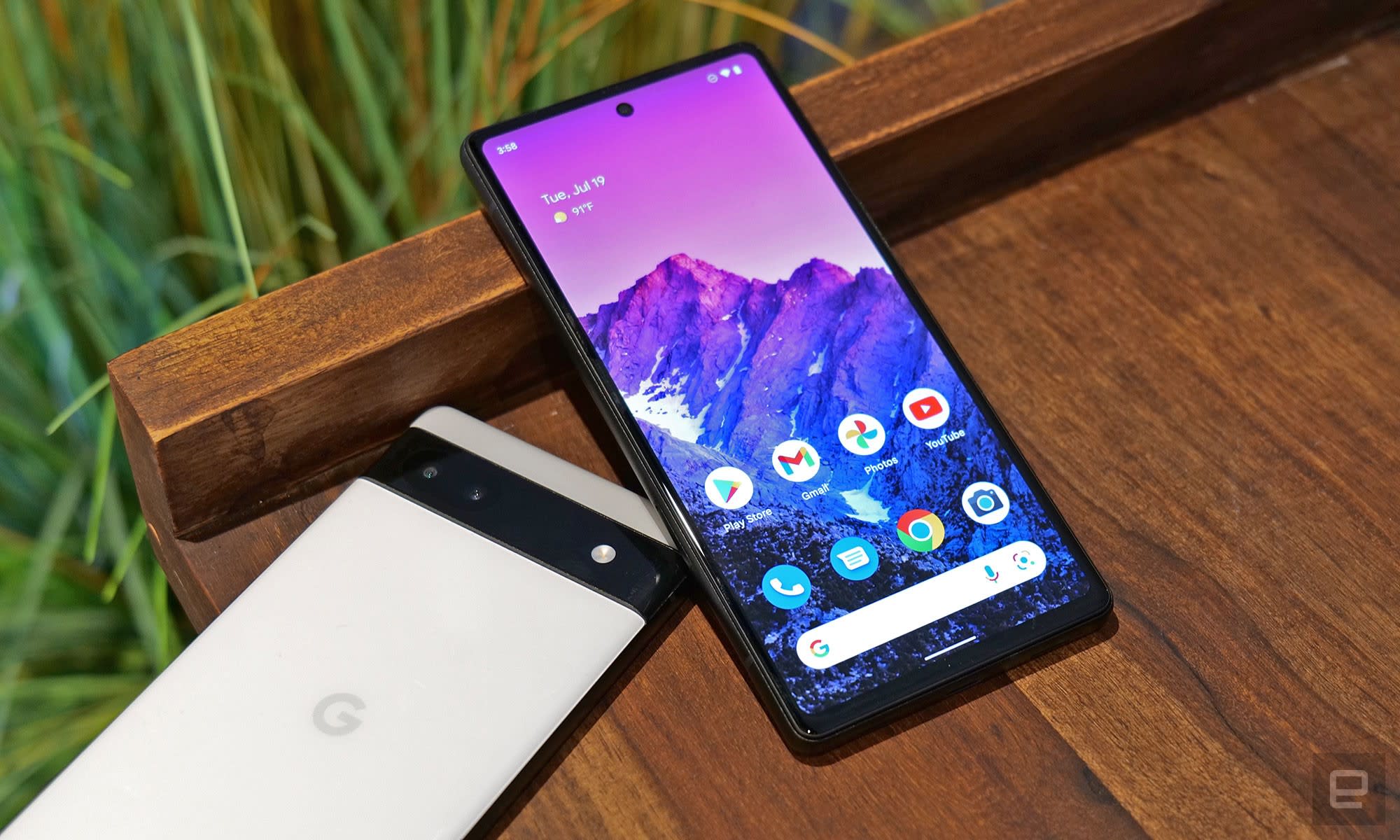 Google Pixel 6a review: The tiny Pixel phone I’ve been hoping for

But with some caveats.

Google’s midrange A phones have quickly become some of the most anticipated launches each year. Like its predecessors, the Pixel 6a is a sub-$500 handset that offers excellent cameras, performance and battery life. This year’s model moves the series over to Google’s own Tensor chip, and brings over the two-tone color scheme and camera bar the company debuted on its flagships last year. With so many similarities to its higher-end siblings, the $449 Pixel 6a feels less like the budget option and more like a smaller version of Google’s best phone.

Similar to recent A-series Pixels, the 6a is basically a scaled-back clone of the company’s flagships. This time, though, Google didn’t skimp on the color options for its budget handset. In addition to white and black, the Pixel 6a comes in sage as well. It has a two-tone palette similar to the Pixel 6 and 6 Pro, with a black horizontal camera bar about an inch from the top. The top strip is a paler pastel green, while the rest of the rear is a darker, more muted shade that’s similar to the Pixel 5.

I prefer the mintier color of the Pixel 6, but the 6a’s version is pretty enough. At least the camera bar protrudes less, and the Pixel 6a doesn’t wobble when placed face up on a surface. It’s also rated IP67 for water and dust protection, though I thankfully have yet to drop my review unit or get it wet. I do wish it had Gorilla Glass Victus protecting its screen like its flagship counterparts, but it at least is covered by Gorilla Glass 3. I also wish this thing had a headphone jack like the Pixel 5a, but unfortunately Google saw fit to remove it this year.

Though it’s not much smaller than the Pixel 6, the 6a is noticeably lighter and easier to maneuver with one hand. To be specific, the 6a is about 30 grams (or 1 ounce) lighter, but it also has a smaller 6.1-inch screen. Meanwhile, the Pixel 6 has a 6.4-inch display and is a whole 0.05 inches thicker.

So, while photos, wallpapers, icons and text all look as crisp and vivid on the Pixel 6a as on Google’s higher-end phones, when it comes to scrolling and games the 6a can feel sluggish. High refresh rates aren’t unheard of on midrange phones, either. The Galaxy A53, for example, can get up to 120Hz, though to be fair the iPhone SE is also stuck at 60Hz.

I did find it slightly easier to read things on the iPhone SE under sunlight, though the Pixel 6a wasn’t too difficult to see. Indoors, the Pixel 6a was vibrant and sharp, and I enjoyed watching Instagram Stories and ogling gorgeous landscapes on it.

I also didn’t mind playing music on the Pixel 6a. Its stereo speakers did a decent job of delivering clear vocals and instrumentals on songs like Ariana Grande’s No Tears Left To Cry, though like most smartphones it lacks bass. I used the Pixel 6a and iPhone SE to record a rendition of U2’s I Still Haven’t Found What I’m Looking For, and Google’s handset was better at prioritizing my voice over ambient noise, too.

Google has long excelled at photography, and the Pixel 6a is a continuation of that tradition. Its pair of 12-megapixel rear cameras and 8-MP front sensor took bright, colorful pictures that rivaled those from more expensive phones.

Details like window panes and individual blades of grass were crisp, and Google continues to deliver superior images in low light. Frankly, at this price, there is no better camera for nighttime photography. Thanks in large part to Night Sight, the Pixel 6a generally captured brighter images in extremely dim environments, retaining greater detail even in shadows. The stationary bicycles in an exercise room at night were clearer in shots from the Pixel 6a than those from the iPhone SE, and I could even read the words on a sign in Google’s version. Apple’s decision to cut the night mode on its budget phone puts it at a real disadvantage here.

Compared to the iPhone SE, the Pixel 6a’s pictures tended to have lower contrast and less-saturated colors. Apple also produces better dynamic range, and it was hard to pick my favorite images between the two.

Google has the upper hand when it comes to versatility, though. Since it has an additional ultrawide lens (compared to the iPhone’s solo rear camera), the Pixel 6a made it possible to zoom out to grab expansive landscapes. And though it doesn’t have a telephoto lens, Google’s viewfinder interface makes zooming into distant subjects easier. Instead of having to pinch on the iPhone, you can switch between preset distances like 0.6x, 1x and 2x just by tapping the onscreen buttons.

I also preferred Google’s Portrait mode, which let me get closer to subjects and applied a shallower depth of field. Both the iPhone and the Pixel took selfies of similar quality, and the differences between them came down to very slight variations in color temperature. Given Google and Apple use 8-MP and 7MP sensors respectively, the similarity in sharpness isn’t surprising.

Despite having the sharpest cameras, the Galaxy A53 delivered photos that were close in quality to the Pixel 6a and iPhone SE. Its 32-MP front camera and primary 64-MP sensor on the back didn’t result in crisper images. Compared to the Pixel and iPhone, though, the Galaxy A53’s camera was noticeably slower and struggled to capture multiple shots in rapid succession.

Though Google did equip the Pixel 6a with some of the tools found on its flagships, like Magic Eraser to edit away photobombers, for example, features like Action Pan and Long Exposure are absent. That’s fine by me, since Magic Eraser is the most useful of the lot, and works as well on the 6a as on the Pro. You also get the ability to shoot in RAW, which you can’t do on the iPhone SE.

Performance, fingerprint sensor and in use

As the first A-series phone using Google’s own Tensor chip, the Pixel 6a’s performance should be pretty similar to its flagship siblings. In general, this was true — the 6a barely stuttered when jumping between games, editing photos, browsing Instagram and shooting videos. Just like my Pixel 6 Pro, though, the 6a tended to run warm when playing casual games such as HK Mahjong or the New York Times Crossword for more than 15 minutes. It never got alarmingly hot, but I did want to put it down after a while.

Occasionally, the Pixel 6a would take a few seconds to display information in an app, but that mostly happened in the first hours after I set up the phone, so I’ll chalk that up to early loading issues. I’m more concerned about the long-term stability of the Pixel 6a’s software, especially given all the problems plaguing the Pixel 6 and 6 Pro since they launched. I haven’t encountered anything major during my testing, but most of the bugs on the other two only started showing up weeks after our review period.

For now, I can only say the software behaves as expected, and that Google supports up to five years of Pixel updates. Switching wallpapers and applying new system-wide color schemes generated by Android happened without significant delay, and everything I enjoy about Pixel UI is here. I love being able to just tell my phone “Stop” to silence it when an alarm is going off. (Though, on my Pixel 6 Pro this usually takes around three increasingly frustrated attempts until I’m screaming at the phone.) I also appreciate Assistant features like Call Screening and Hold For Me, which make the excruciating experience of being on the phone a lot less painful.

The A-series has long stood out for excellent battery life, and once again, the 6a is a winner. It clocked a whopping 19 hours and 10 minutes on our video rundown test, which is shorter than the Pixel 5a, Pixel 6, and Galaxy A53, but still hours longer than the iPhone SE.

While the iPhone SE offers wireless charging, unfortunately the Pixel 6a doesn’t. It also only supports fast charging with wired 18W chargers. The good news is though, the 6a is also compatible with the M3/T4 hearing aid standard, as well as sub-6 and mmWave 5G.

I think it’s time we stopped seeing the Pixel A series as a “budget” line. With its refined design, powerful processor and satisfying cameras, there are more similarities than differences between the 6a and its flagship siblings. It is easily one of the best phones for the money. Yes, it would be nice to get a faster, brighter screen and wireless charging, but those aren’t a given on a midranger. If you can’t live without a higher refresh rate and can spend no more than $500, the Galaxy A53 is an alternative, though be warned that its performance is questionable. In the US, there is no better Android phone under $500 than the Pixel 6a.

All products recommended by Engadget are selected by our editorial team, independent of our parent company. Some of our stories include affiliate links. If you buy something through one of these links, we may earn an affiliate commission. All prices are correct at the time of publishing.
View All Comments
Google Pixel 6a review: The tiny Pixel phone I’ve been hoping for