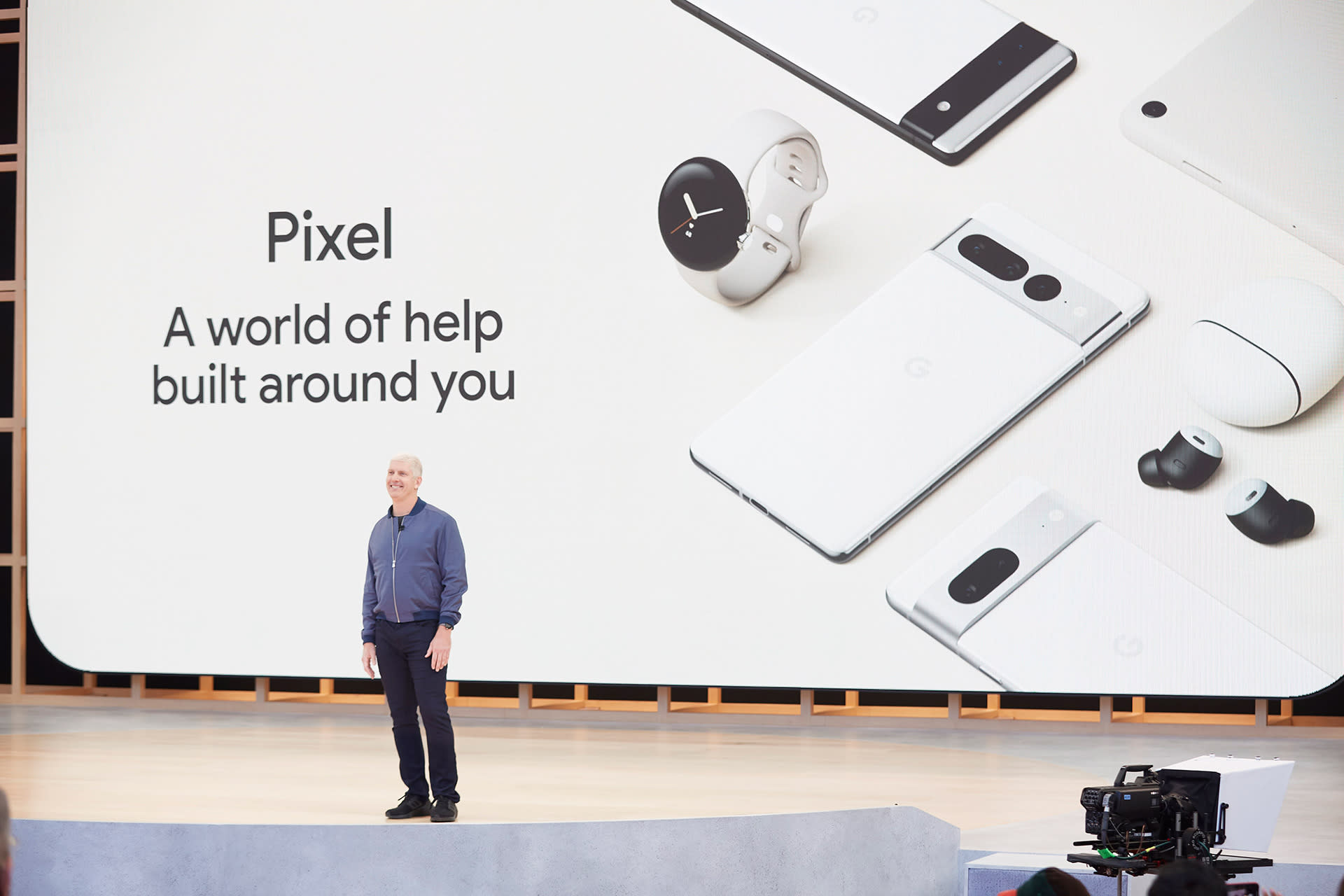 What to expect from Google's Pixel 7 event on October 6th

The Pixel 7 line and Pixel Watch are the clear stars of the show.

Google’s fall hardware event promises to be special this year. It not only marks the official debut of the Pixel 7, it will launch the company’s first self-branded smartwatch — the Pixel Watch. But what will those devices bring to the table, exactly? And will there be any surprises beyond that? We’re here to let you know what to expect when Google’s broadcast begins October 6th.

The meat of the presentation will probably focus on Google’s latest phones, the Pixel 7 and Pixel 7 Pro. An official preview at this spring’s I/O conference revealed that they’ll largely iterate on the Pixel 6 line. You can expect an updated but familiar-looking design with a seamless aluminum frame that extends to the camera bar. There will also be a new Tensor G2 chip that promises improved performance for media, speech recognition and other tasks. They’ll run Android 13. The base model will have two rear cameras like the regular Pixel 6, while the Pro adds a third.

But what kind of performance improvements can you expect? Subtle ones, apparently. Prototype leaks hint the standard Pixel 7 will carry 8GB of RAM and start with 128GB of storage, much like its predecessor. A variety of pre-release scoops also suggest the Tensor G2 isn’t a dramatic leap forward, with slight improvements to graphics, power efficiency and clock speeds. Likewise, developer Kuba Wojciechowski claims the cameras will remain largely unchanged. There could be little reason to upgrade from a Pixel 6, then, although this year’s phone may be worth the investment if you’re coming from a Pixel 5 or earlier.

The biggest news might be what doesn’t change: the price. A rumor from Android Police founder Artem Russakovskii maintains that the Pixel 7 and Pixel 7 Pro will respectively start at the same $599 and $899 prices as last year’s phones. They’ll represent significant value for money if the report is true, particularly at a time when many device prices are creeping upwards.

It’s not certain just when the Pixel 7 range will reach customers. Pre-orders will start the day of the event, but Google hasn’t said when the phone will be available. WinFuture’s Roland Quant has heard the devices will start shipping October 18th, though, so you may only have to wait a couple of weeks before the hardware reaches your hands.

The highlight for many, however, will be the Pixel Watch. It’s Google’s first official smartwatch, and promises to serve as a showcase for Wear OS 3. You can expect tight Fitbit integration that includes fitness, sleep and general health tracking. The company is taking some design cues from the Apple Watch with an upscale-looking case, a prominent crown and easily swapped (if proprietary) bands, but it’s using a circular display like many other Wear OS devices.

Google hasn’t shared much about what’s inside, but a prototype left in a restaurant points to heart rate, blood oxygen and ECG monitoring that might be borrowed from the Fitbit Charge 5. We wouldn’t be surprised to see tap-to-pay Wallet functionality, either. 9to5Google sources believe the Pixel Watch might use a stock Samsung Exynos chip instead of a custom Tensor part, but that it might pack a large 2GB of RAM (even the Galaxy Watch has ‘just’ 1.5GB), 32GB of storage and a coprocessor that keeps battery life in check. Emulator code also points to the introduction of Google’s next-generation Assistant on Wear OS watches, although it’s not known just how the AI helper will evolve on your wrist.

As with the phones, Pixel Watch pre-orders should start October 6th. It’s not yet known if the hardware will ship at the same time as the Pixel 7, though, and established leaker Yogesh Brar warned of a possible “limited release” (that is, only in a few countries). You might have to pay a premium compared to other options, too. A 9to5Google price leak mentioned a $350 starting price, with a cellular version bumping the cost to $400. That’s significantly higher than the $280 Galaxy Watch 5, and not far behind the $399 Apple Watch Series 8. The Pixel is clearly pitched as Android’s answer to the Apple Watch, and might be priced accordingly.

There haven’t been solid rumors of additional hardware at the event. Nonetheless, we wouldn’t rule it out. Few would have expected Google to preview the Pixel Tablet long before its 2023 release — it’s no longer out of the question that you might see a teaser for more products. But what, exactly? Besides more details for the tablet, there are longstanding murmurs of a foldable Pixel phone that might get an early peek. With that said, there’s no tangible evidence either Pixel product will make a cameo.

We also wouldn’t count on more Nest devices. Apart from a dearth of leaks, there are only so many things Google can do to upgrade some of its offerings, such as the audio-only Nest Mini and Nest Audio. That said, Google hasn’t touched some of its lineup for two or three years. The company may have an incentive to keep things fresh when Amazon just overhauled its smart home gear.

If there are any surprises, they’re most likely to involve AI-related features. At last year’s event, Google unveiled Pixel-first software tricks that included on-screen call center menus and as-you-type translation. A repeat wouldn’t be surprising this time around, even if some of those extras won’t require a Pixel in the future. Google used AI as a major selling point for the Pixel 6, and the sequel could easily get similar treatment.

Follow all of the news from Google's Pixel 7 event right here!

All products recommended by Engadget are selected by our editorial team, independent of our parent company. Some of our stories include affiliate links. If you buy something through one of these links, we may earn an affiliate commission. All prices are correct at the time of publishing.
View All Comments
What to expect from Google's Pixel 7 event on October 6th