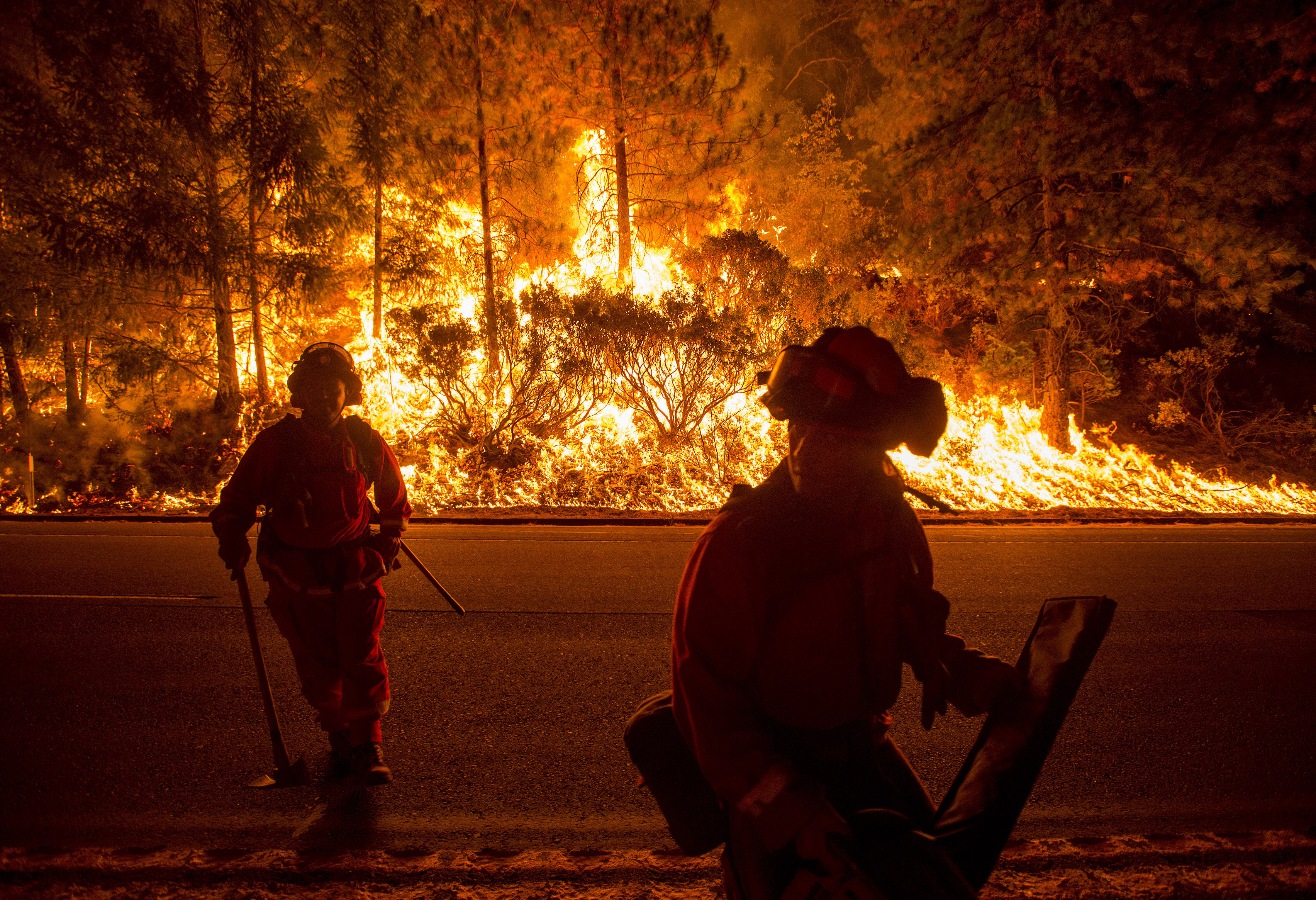 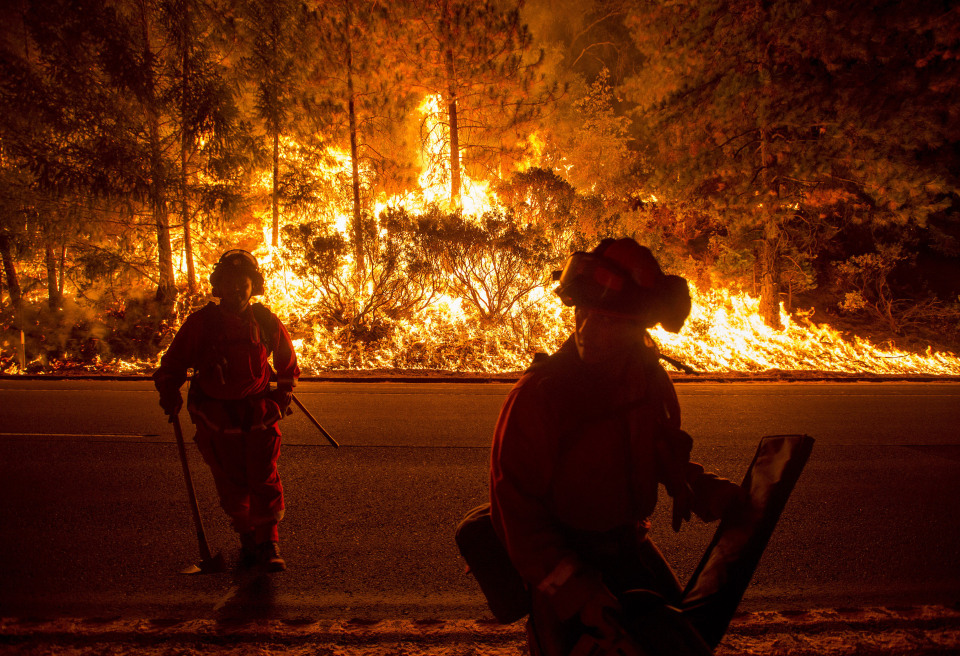 The West’s 2020 fire season has been absolutely brutal, with more than 7,600 blazes spreading the length of coast, killing 35 people and charring 3.1 million acres to date. Autumn winds arrived early this year, reducing humidity and desiccating undergrowth from San Diego to Seattle. Those conditions combined with widespread lightning storms arriving in the wake of an unrelenting heat wave have created ideal conditions for disaster which have resulted in the most destructive fire California has ever seen.

But even areas that aren’t at direct risk of being charred are suffering as well. Abhorrent air quality over the past few weeks has forced broad swaths of the region’s residents -- not just vulnerable populations -- to shut themselves away at home with their windows and doors sealed. Luckily the US has long operated a robust air quality monitoring system for just this sort of situation, here’s how it works.

I live in CA and this is what our sunsets have looked like for weeks. My friend in upstate New York just posted this picture. Smoke from the west coast fires has reached the east coast. Climate change affects all of us. We are all connected. pic.twitter.com/TCVlUtD1fo

Congress’ first attempt at drafting environmental legislation came way back in 1955 with the passage of the Air Pollution Control Act, which declared air pollution a public health hazard but maintained that it was the responsibility of states to do something about it while the Feds acted simply as an informational resource. The Clean Air Act of 1963 brought the authority to actively combat air pollution at the national level under the auspices of the EPA and it was amended in 1965 to empower the government to set emission standards for automobiles. The subsequent Air Quality Act of 1967 continued to build on the precedents set by earlier legislation, enabling the government to set up and maintain ambient monitoring studies as well as perform inspections on potential pollution sources. It also established the Air Quality Index (AQI), which acts as a barometer for measuring the cleanliness of our local atmosphere.

In 1970 the EPA established the National Ambient Air Quality Standards (NAAQS) and directed states to develop emission reduction strategies to bring their air quality into compliance. Those standards were tightened first in 1977 with the development of Prevention of Significant Deterioration (PSD) regulations and modernized in 1990 to account for new hazards like acid rain.

Today, the AQI tracks the presence of five harmful pollutants: ground-level ozone, particle pollution (aka particulate matter, as in PM2.5 and PM10), carbon monoxide, sulfur dioxide, and nitrogen dioxide. Air pollution contributes to the premature deaths of some 4.2 million people globally every year, according to the World Health Organization (WHO). These deaths come in the form of heart disease, stroke, chronic obstructive pulmonary disease, lung cancer, and pediatric acute respiratory infections.

Particulate matter, which the WHO classified as a known carcinogen back in 2013, is especially insidious as it’s capable of penetrating lung tissue to enter the bloodstream where it damages the cardiovascular, cerebrovascular and respiratory systems. What’s more PM2.5, that is, particulate matter that is smaller than 2.5 microns in diameter, which is found in car exhaust, as well; as wood and coal smoke, can travel hundreds of miles, as evidenced in the tweet below. Of course, getting a big lungful of carbon monoxide won’t exactly extend your lifespan, either. This is why it’s vital to remain indoors as much as possible in these hazardous conditions and wear an n95-rated mask (or higher) when venturing out.

Have you noticed the haze? It’s smoke from the wild fires out west that has made its way across the U.S. A cold front will push the smokey haze out of NYC on Friday. pic.twitter.com/PKUVJ73TEP

To actually monitor what sorts of pollutants are contaminating the air column, the EPA, state, local and tribal governments collect data from a mix of ground- and satellite-based monitoring stations throughout the country as part of the Air Quality System (AQS). Ground stations have been collecting data since 1957 and, as of 2018, some 52,286 stations took more than 117 million samples. However that figure dropped precipitously last year with just 9,143 stations reporting around 10 million samples. In fact, air quality in the US in general has suffered in recent years. The US saw a 15 percent increase in the number of days with unhealthy air both in 2017 and 2018 compared to 2013 - 2016, per the Associated Press.

The ground monitoring system is augmented by a pair of advanced climate-monitoring satellites. There’s the Geostationary Operational Environmental Satellite - R series (GOES-R) which was launched in 2016. Sitting 22,300 miles above the equator, the GOES-R can watch the entire western hemisphere from its geosynchronous orbit and takes measurements every five minutes. Unlike ground-based stations which bounce radar into the atmosphere and detect weather conditions using the return signal, the GOES-R passively detects the electromagnetic emissions from the planet’s surface in the visible and infrared range. This enables the system to collect data nonstop. So far, two of the four planned GOES satellites have entered orbit, with the remaining pair going up in 2021 and 2024, respectively.

The Joint Polar Satellite System (JPSS) plays an equally important role. Since 2017, this satellite constellation has orbited the planet pole-to-pole 14 times a day. It collects high resolution data on everything from sea and land surface temperatures to snow and ice coverage to vegetation coverage, forest fires, and aerosols which contribute to poor air quality. But while its measurements are more nuanced than what the GOES-R produces, the JPSS can only make two full circuits of the planet each day. Only the first JPSS satellite is currently in orbit. The other three will launch in 2021, 2026 and 2031.

Measurements of the five monitored pollutants gathered from these satellites and ground stations are then fed into a piecewise linear function to generate an easy to read and easy to understand numerical index, aka the AQI. Split into six danger categories, the AQI runs from a perfectly healthy score of 0 to a hazardous 500. Of course this scale only applies to US measurements. Canada, for example, uses a 10-step scale while Hong Kong only utilizes five steps. What’s more, the statistics reported to the NAAQS are slightly different from those reported to the general public. As the widely cited AirNow.gov website notes, “AirNow maps and AQI readings use only ozone, PM10, and PM2.5 at this time. However, once real-time calculations for other pollutants are developed, AirNow may offer real-time data for more pollutants. Some locations do provide air quality forecasts for NO2 and CO in addition to PM and ozone.” Still, even though the information may not be quite as granular as what our elected officials see, it provides the American public a helpful barometer as to the atmospheric apocalypse which has temporarily enveloped us.

To get up to the hour updates about the air quality in your area, just hit up AirNow.gov and enter your zip code. You can get even more localized details with the use of a personal AQI monitor. The Kaiterra Laser Egg+ monitors your indoor air quality as well as tracks the concentration of PM2.5, volatile chemical compounds, plus ambient temperature and humidity. That is, if you can find one of course. They’re currently sold out on Amazon. Alternatively, you can give the $80 Temtop M10 Air Quality Monitor a shot. It uses a laser particle sensor to detect particulate matter down to 2.5 microns in addition to formaldehyde (a common off-gas from building materials) and volatile organic pollutants. Its Li-ion battery can run for up to six hours on a single charge so you can tote it along wherever you go. Though we are in the midst of a deadly pandemic that has all but shut down our daily lives so, really, where are you even headed?

In this article: fire, California, AQI, Air pollution control act, air pollution, NAAQS, feature, tomorrow
All products recommended by Engadget are selected by our editorial team, independent of our parent company. Some of our stories include affiliate links. If you buy something through one of these links, we may earn an affiliate commission.