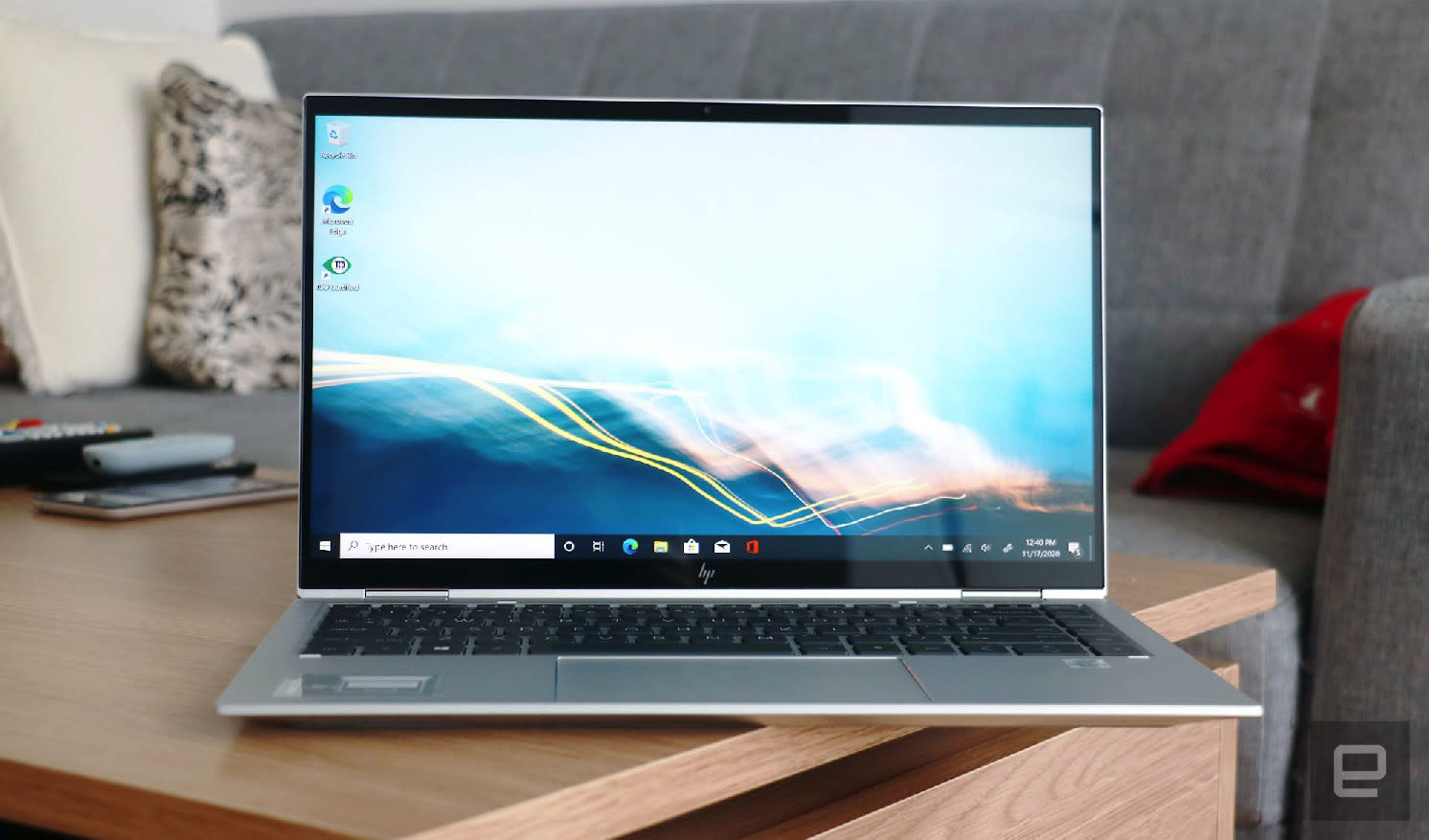 The EliteBook x360 1040 G7 is the first of likely many HP notebooks with presence detection.

It’s getting pretty difficult to make a laptop that stands out. There are countless thin and light notebooks with comfortable keyboards, beautiful screens and enough power for most professional workflows. To really make an impression, manufacturers have to introduce some unique features that rise above mere gimmickry. HP’s latest attempt is something called Presence Aware on the EliteBook 1040, which lets the machine know when you’re in front of it so that it can dim the screen when you leave and wake up when you return. There’s also a new AI noise reduction tool to make your voice sound clearer on calls.

Though we don’t review many commercial laptops like HP’s EliteBook series, we’re making an exception this time because interesting new features like Presence Aware and AI Noise Reduction tend to show up in HP’s consumer models after debuting in business-first lines. The $1,560 EliteBook 1040 is our first chance to determine if they’re actually useful. 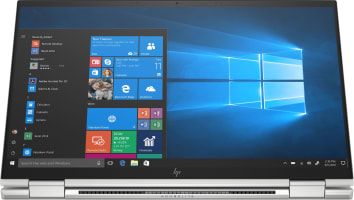 HP has become a leader in laptop design, with its Spectre series being some of the best-looking ultraportables around. The company’s machines often have super thin silhouettes with unique flourishes like leather coverings. The EliteBook 1040 is less striking -- its silver exterior and sloping profile are pretty typical these days, but touches like the angled lip and shiny branding on the back edge add subtle style. HP also said this year’s model is slightly smaller and lighter than the last generation. Regardless, this is a good-looking machine, and one of few commercial laptops that also looks stylish.

The 14-inch display is surrounded by thin bezels on the right and left, though the top and bottom borders are wider to accommodate a Windows Hello-capable IR webcam (and, uh, HP’s logo). You can use a dedicated keyboard shortcut to trigger a physical shutter to keep prying eyes from spying through your webcam. Meanwhile, next to the spacebar sits a fingerprint sensor. Unlike Samsung’s Galaxy Book Flex 13, which also has a fingerprint scanner on the keyboard, HP’s reader takes the form of a button that you can actually push down on. It’s a bit superfluous since you don’t have to press the key for the laptop to read your fingerprint.

Possibly because it’s meant for business users, the EliteBook 1040 comes with a conservative (which is to say generous) port selection, including two USB-A connections, an HDMI socket, a microSD card reader and a headphone jack. There’s also a pair of Thunderbolt-friendly USB-C ports, which you can use to charge the device on the right edge. That said, having one on either side would have been a bit more convenient.

The EliteBook’s 1,920 x 1,080 screen is crisp and colorful. I enjoyed watching Engadget’s docuseries Superhumans and the speakers flanking the keyboard were loud and clear. I also played videos of Costa Rica in 4K and they looked rich and detailed, while Christmas jazz music was bright and well-rounded.

I do wish the display were brighter, though -- it was sometimes hard to see in sunlight. It’s still clearer than HP’s other laptops with built-in privacy filters, though. By skipping out on the filter, the EliteBook 1040 instantly improved its viewing angles.

I’ve loved HP’s EliteBook keyboards for some time now, and the 1040 doesn’t disappoint. The buttons are satisfyingly deep and offer clicky feedback that reminds me of mechanical keys. The layout is well spaced, and since this is a 14-inch machine there’s also room on the right for an additional column of keys including Home, Page Down, Page Up and End.

HP also threw in a nifty programmable key in the shortcut row at the top, which you can set to launch your favorite apps, files or websites. Using a combination of Ctrl, Alt and Shift with the programmable button, you can create up to four different shortcuts. For example, you could set the key to launch your messaging apps, browser with tabs open for email and calendar, as well as your photo and audio editing software. This way, you can start your work day with all your frequently used tools with just a push. Then you could set Shift-ProgramKey to pull up three different browsers set to the PlayStation 5 order page for various retailers when a drop is about to happen. It’s a simple but surprisingly useful feature that I wish more companies would adopt.

Another feature unique to the new EliteBook 10 series is HP’s Presence Aware. This uses a proximity sensor to tell if you’re in front of your laptop to dim your screen and lock your machine when you walk away, and wake it up when you’re back. Because it uses a proximity sensor instead of a camera, Presence Aware will also work if you’ve shuttered the webcam, and it’s not looking for identifying features like your eyes or face.

On my first review unit I couldn’t use Presence Aware at all; the settings page just said “Service Unavailable.” The second unit worked fine, and I set the system to dim and lock within five seconds of me leaving. It mostly behaved as I expected: The system woke up once I returned, and signed me in via Windows Hello using the webcam.

Since I’m working from home and no one else is here, Presence Aware doesn’t offer many benefits for me other than a fraction of a second saved by not having to hit a button to wake the laptop up. HP claims that this can also help save battery by putting the machine to sleep when you’re away, though I don’t find it that different from existing screen timeout tools.

When we do return to offices, though, this feature could be useful for those of us who don’t always remember to lock our laptops when we leave our desks. It still requires at least a few seconds after you walk away to lock your machine, so if someone stood in front of your desk once you leave they could thwart the auto-lock. But at least if you are still in the vicinity, you’d be aware of would-be interlopers.

To be clear, HP isn’t the first to introduce such a feature; Dell has implemented something similar using a 40-degree time-of-flight (TOF) sensor. HP is quick to point out that it uses a 60-degree TOF sensor that scans a wider angle so it’s quicker at knowing when you’re back at your desk.

Another feature that’s new with the EliteBook 1040 is an “AI noise reduction” tool that’s supposed to suppress ambient noise for “crystal-clear conferencing.” You might want to reword your claim, HP, because even though the feature seemed to work, it didn’t make my voice sound completely clear.

I used Audacity to record myself speaking while I played sounds of a siren on my phone, and the AI was smart enough to silence the noise when I wasn’t talking. Whenever I did say anything, though, the mic activated and the EliteBook picked up the wailing sounds in the background, so I still had to compete to be heard. It’s impressive that the system is smart enough to know when I’m speaking and open up the microphone, but it doesn’t appear to be suppressing the sounds it claims it does while I’m talking. These noises include rustling paper, barking dogs and slamming doors. HP also didn’t respond to a question about whether this is something you can turn off.

Thanks to its 10th-gen Intel Core i7 processor, the EliteBook 1040 was more than capable of handling my daily workflow. I encountered no delays as I wrote up news posts while covering a live event on YouTube, downloading and editing pictures and researching stories. It kept running even as I pushed it harder, jumping in and out of League Of Legends to chat with my friends on Discord and Telegram. That said, it did take a second or so to switch between those apps.

The EliteBook also lasts a long time. On our video rundown test, it clocked 14 hours and 23 minutes, which is a respectable score. In general use, the EliteBook 1040 also managed to stick around all day.

The EliteBook x360 1040 G7 starts at $1,500 with a hefty discount on HP’s website right now, and for that price there are plenty of better consumer options to consider. Of course, your company’s IT department might be willing to pay more for the security software and protocols that are compatible with its setup.

But features like HP Presence Aware and noise reduction are what I’m more concerned about in this review and neither of them are very exciting just yet. If they’re a taste of what’s to come in future mainstream laptops, I believe companies will continue to struggle to find ways to make their products stand out. Aside from those features and its somewhat dim screen, though, the HP EliteBook x360 1040 G7 is a good if somewhat pricey laptop.