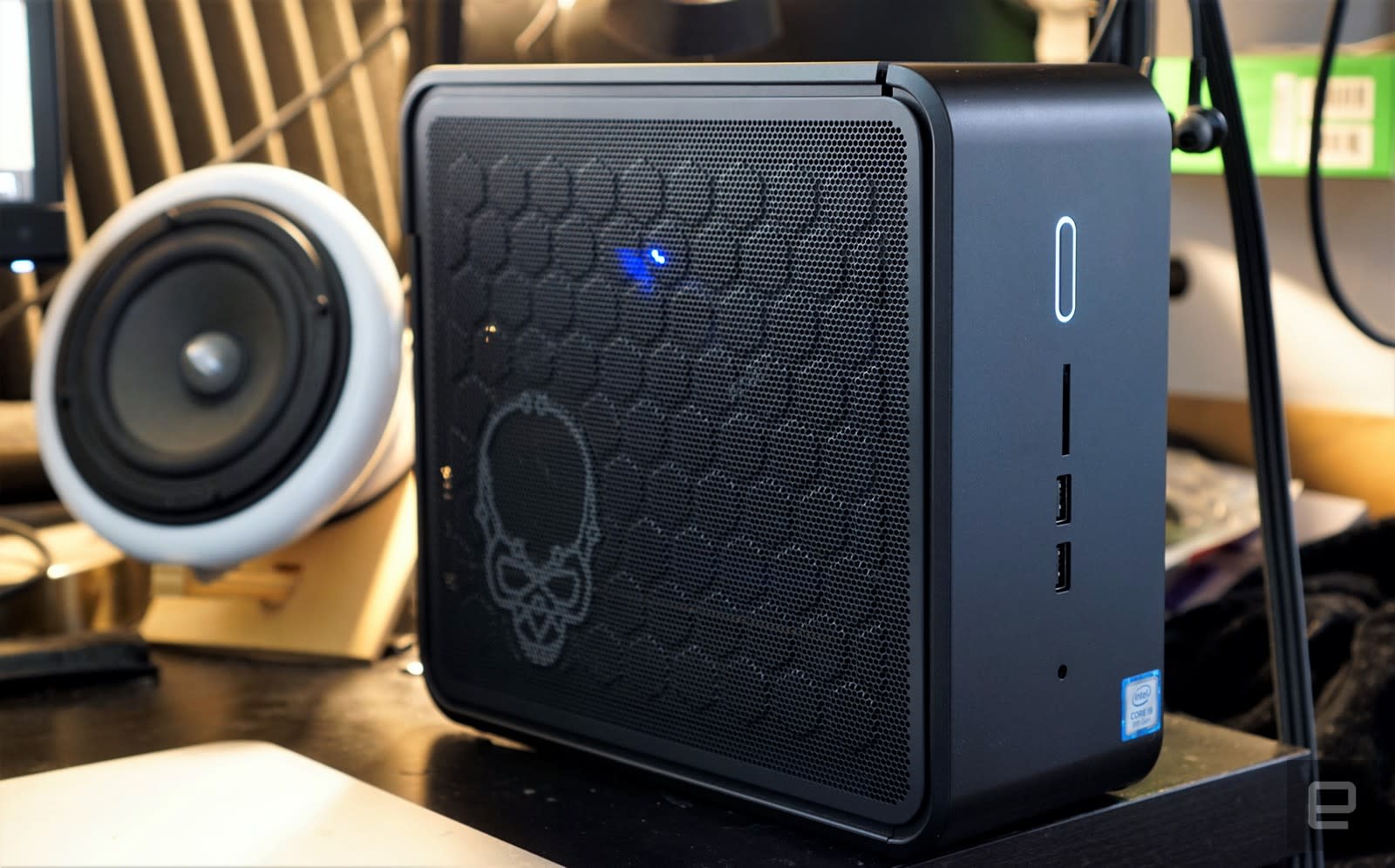 Intel's NUC line has always been a bit of a curiosity. They're pint-sized desktop PC kits meant for enthusiasts who prioritize size over all else. Think of them as glimpses into the future of tabletop PCs. (NUC stands for "next unit of computing".) For the last few years, Intel has even dabbled with intriguing entries focused on gaming. (The previous version featured the short-lived chip collaboration with AMD’s Radeon graphics.) But now, Intel finally has a tiny PC that can take on full-fledged gaming rigs: the NUC 9 Extreme, a small machine that can actually fit a desktop graphics card.

Yes, it's larger than any previous NUC, which seems like a step backward. But at five liters, the NUC 9 Extreme is still significantly leaner than any desktop with a dedicated GPU. The real magic is how Intel accomplished this. It's shockingly modular: You can plug in any graphics card that's up to 8 inches long. And Intel has also developed a swappable "Compute Element," which houses a soldered mobile CPU, two slots for laptop-sized RAM and space for two M.2 SSD drives. There’s also another M.2 slot tucked away inside the case. If you wanted a processor upgrade in a few years, you could just switch out the Compute Element for a new model. Powering it all is a compact 500-watt power supply with pre-routed cables.

Intel's NUCs have always seemed like crazy projects developed by the company's in-house small form-factor fetishists, with no thought towards how their innovations can be used by the rest of the industry. But with the NUC 9 Extreme, Intel is finally building a genuine platform that other companies can adopt. It's the core architecture of Razer's Tomahawk PC, which is slightly larger than Intel's reference kit but can also fit in a full-sized graphics card. You'll be able to move your Compute Unit between all of these kits, which adds another level of modularity to the entire concept. If another company makes a case with more features, you can easily jump ship.

Opening up the NUC 9 Extreme is relatively simple, as it should be. You just need to remove the top of the case with two screws and slide the two side panels out. The Compute Element pops out like a PCIe expansion card, though removing it requires disconnecting a few tiny wires. (Even the future of desktop computing can’t avoid those annoying connections.) Once the Compute Element is out, you can access the memory and storage slots by removing two more screws. Once you've got the entire system splayed open, Intel's accomplishment is even more impressive. There's no space to spare -- every millimeter of the NUC 9's internals seems carefully thought out.

Given all of the innovation under the hood, Intel's NUC 9 Extreme kit looks relatively unassuming. Head-on, it's easy to mistake it for one of those nondescript Dell systems you see in libraries and computer labs, with two USB slots, a headphone jack and an SDXC card reader up front. Turn to either side, though, and you're greeted with the white skull logo from Intel's last few gaming NUCs. That's a clear sign that this isn't your average tiny computer. Surprisingly enough, there aren't any colorful LEDs to signify the kit's gaming bonafides. But we figure Intel just couldn't spare the room.

The NUC 9's rear ports are determined by the Compute Element and GPU you've plugged in. In our review unit, which featured the top-of-the-line Compute Element with a Core i9-9980HK CPU and an ASUS dual-slot RTX 2070 GPU, we had just about every bit of connectivity you'd want. There were two thunderbolt 3 USB-C ports, four USB 3.1 Type A connections, dual gigabit Ethernet and an HDMI connection. The GPU housed DisplayPort, another HDMI slot, and DVI (something I haven't seen in years!).

When it comes to ports, the NUC 9 Extreme offers most of what you'd expect from a desktop. And the same is true of its performance: This thing screams. While playing Destiny 2 in 1080p with maxed out settings, I saw between 120 fps and 140 fps. The Hitman 2 Mumbai benchmark, reached a solid 101 fps in 1080p as well. It was a decent 4K performer as well -- as long as I lowered its graphics settings to mid-range quality. I clocked around 70 fps while playing both games in 4K once I did that. As for benchmarks, the NUC 9 Extreme blew past every system we've tested over the last few years, even HP's powerful Envy 32 all-in-one.

And even though all of the NUC 9's hardware is crammed together in a very tight space, it stayed reasonably cool, without making much noise. The Compute Element features a vapor chamber cooler and an 80mm fan, while a pair of 80mm exhausts pull heat from the top of the case. It's definitely not a silent system while gaming -- you'll also hear plenty of fan noise from the GPU -- but it's far quieter than the mid-tower desktop I run every day. Temperatures were also impressive: The CPU never jumped beyond 70 Celsius during my testing, and the GPU only occasionally touched 80.

At this point the NUC 9 Extreme might sound too good to be true. It's fast and almost as flexible as a normal desktop. But there's a downside, and it's a big one: It'll cost you dearly. The high-end Core i9 kit we reviewed starts at $1,639, and that's without a graphics card, memory, storage and an OS. Everything else in our system -- an RTX 2070 GPU, a 320GB Intel Optane SSD, a 2TB Kingston SSD, 16GB of DDR4 RAM, and a copy of Windows 10 Professional -- brings the total cost to an eye-watering $3,100.

Fans of tiny desktops are used to dealing with high cost, tight spaces and limited hardware compatibility, so maybe they can overlook the NUC 9 Extreme's premium. (You can save a bit of money by going for one of the less powerful kits, like the Core i5-9300H model starting at $998.) But as someone who's spent much of my PC building life trying to find the most bang for my buck, the high cost is hard to swallow. I realize, though, value isn't the point of compact desktops at all. If you're aiming for the best possible system with the smallest footprint, the NUC 9 Extreme is the new king of a tiny hill.