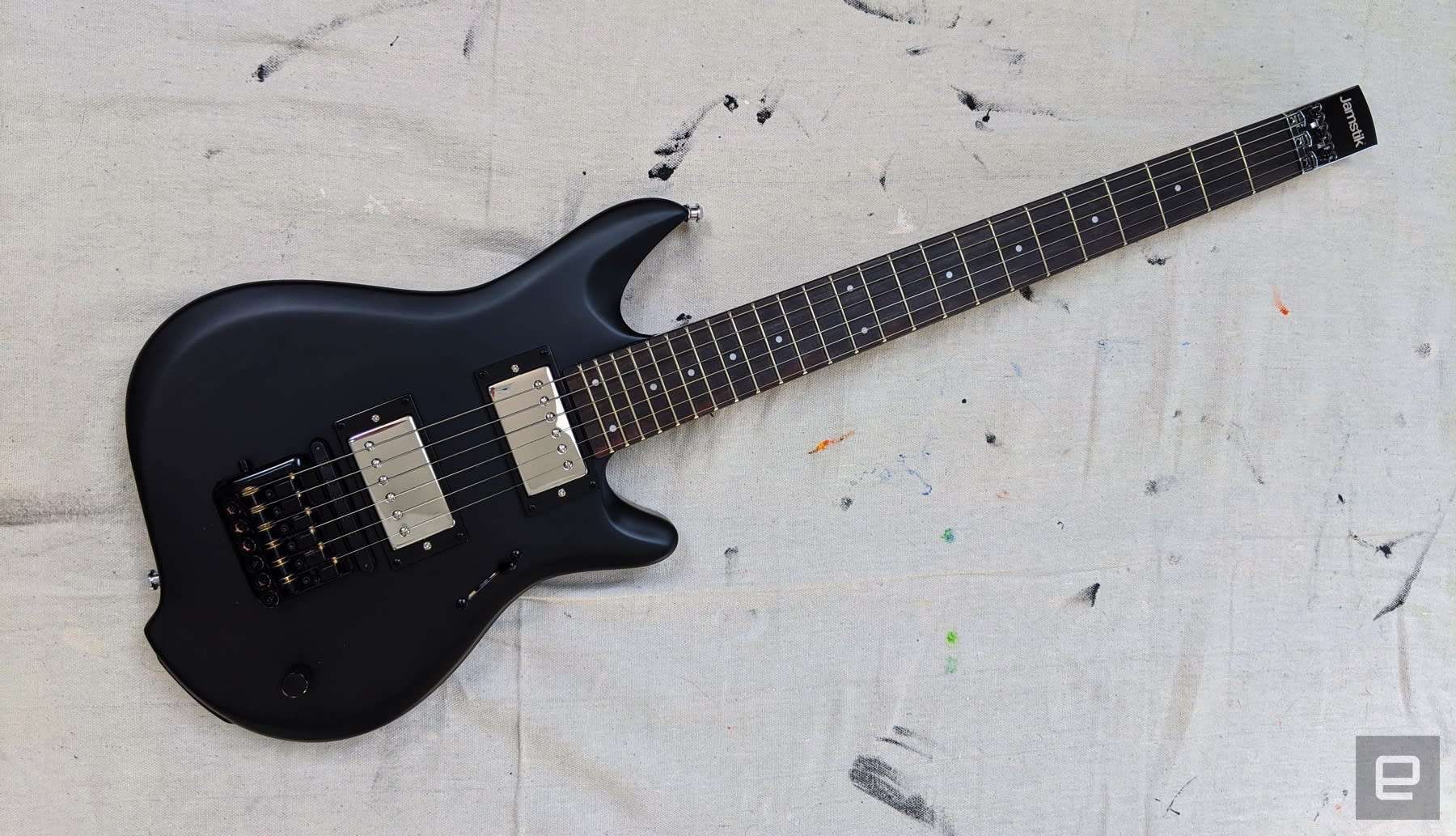 It's not perfect and it's pricey, but it's better than basically every other MIDI guitar.

The Jamstik Studio MIDI Guitar is, as the name implies a guitar. But to be clear, if you’re just looking to buy a guitar, there is no reason to get one. It’s serviceable, but nothing special. The mahogany body and rosewood fretboard feel decent enough. And the humbuckers, with their ability to be split and used as single coils, deliver a decent range of tones. But it’s definitely not $800 worth of pure guitar. No, what sets the instrument apart is the hex pickup mounted at the bridge and Jamstick’s onboard processing algorithms that turn this kind of pedestrian, rebadged travel guitar into a MPE MIDI monster.

Now, I’ve covered the challenges facing guitar-style MIDI controllers before. The subtle variations in pitch and velocity, plus the unique playing techniques like hammer-ons, slides and bends of a fretted instrument just aren’t easy to convert to a series of ones and zeros. It’s much simpler to make a keyboard play nice with a synth.

For all its faults the Jammy did make some strides in this area, and Fishman’s TriplePlay Connect pickup isn’t half bad. But, I have to hand it to Jamstik for creating the smoothest experience I’ve ever had converting my pentatonic noodleings into viable synth tracks. That’s not to say there wasn’t a learning curve, but the journey from unboxing to trying out a (very bad) finger tapping solo in Arturia’s Analog Lab was pretty short. (For the record: It didn’t really work.)

All I did was plug the included USB-C cord into my laptop and I immediately was able to start plucking away in Ableton Live. Jamstik is even kind enough to include a TRS to five-pin MIDI adapter in the box. So within minutes I was able to strum a few pads on the MicroFreak.

Honestly, it took me longer to tune the Studio MIDI Guitar than it did to get it set up in my DAW. If I had to pick a least favorite feature here it would be the tuners. Since it’s meant to be a travel instrument, there’s no headstock. Instead you tune the strings at the bridge with a small tuning key. There’s a magnetic notch in the bridge to store it when not in use. But the key is quite tiny, and I can easily see myself losing this under my desk or, worse, a hotel-room bed.

I don’t know if it’s just the factory strings or the tuners themselves, but it doesn’t stay in tune particularly well. I haven’t bothered to restring it during my month of testing, but I can’t say I’m looking forward to it. The process looks slightly convoluted and involves an allen wrench in addition to the tuning key.

The other obstacle I encountered early on was easily remedied by changing the settings, but it did take me a full day to figure out what was wrong. While everything seemed to work just fine in Ableton, the MicroFreak and Pigments (when running in standalone mode) never seemed to be in tune with the guitar… or itself. Turns out the default bend ranges didn’t play nice with the micromovements of a guitar being fretted, and each synth had its own ideal setting. Learn something new every day, I suppose.

In general the Jamstik seemed to like soft synths better than hardware instruments, but I had little issue getting it to work with my Volca FM or Volca Keys. I even found a few patches on the FM that took on a new life when played like a guitar. Because there’s a 1/4 inch instrument jack, a TRS MIDI connector and a USB-C port on the Studio MIDI Guitar, you can actually play multiple instruments at once. Just for fun I fired up the beta of the Jamstik Creator app, connected the Volca FM and plugged into my guitar amp all at the same time. I won’t pretend the noise I made was truly musical, but it was fun to have the arpeggios ringing out of the FM while my computer tried to follow the bass notes as I strummed chords through a distortion pedal.

For this demo audio and MIDI data were recorded in Ableton using a Focusrite Scarlett 2i4 interface. The guitar’s audio signal was sent through one of Ableton’s builtin amp simulators. No additional processing was done to the MIDI, it was immediately captured as audio from a softsynth as it was being played. The samples crossfade between the raw guitar and the resulting synth track to show it was translated in real time — warts and all.

The Jamstik Creator plugin is one of the features the company is pushing pretty hard. It does double duty as both a virtual instrument and configuration utility. The app isn’t expected to leave beta until sometime in October, but even in its unfinished state it’s still basically a must-have. This is where you’ll adjust string sensitivity, turn MPE on and off, assign MIDI channels and you’ll even find a tuner here.

The instrument portion of it is decent enough. You’ll find some really solid sounds in there, like the ambient piano preset and some fairly convincing bass. The interface can be a little confusing at first glance, but once you figure out its quirks it’s easy to start designing your own sounds.

There are, however, some features I wish were included, like the ability to assign MIDI channels or disable MIDI entirely for individual strings. This would make the whole controlling multiple instruments thing a lot more useful. Then you send just the root notes to your bass synth and the high strings to plucky lead synth while strumming a chord progression. This is something you can do with the Fishman app, for example.

All these complaints are relatively minor, though, considering this is easily the best performing MIDI guitar I’ve used. The hex pickup at the bridge is fast and accurate when it comes to pitch tracking. Even hammer-ons, bends and slides are recognized with ease and rendered as faithfully as possible. It simply blows the Jammy out of the water on that front.

Hammer-ons and bends (at least once you’ve dialed in the right range) are particularly impressive here. You can play a VST of a guitar with this MIDI guitar and the results are surprisingly convincing. Slides can be a little messy. I tend to just avoid them, but with some practice and patience you can get usable results.

One thing to keep in mind: A synth is not a guitar. And the guitar was not designed with MIDI in mind. So keep your expectations in check. Massive X isn’t going to suddenly react like a guitar to your playing. And you should expect the occasional ghost note to be detected, especially if your playing is as sloppy as mine. And super fast picking doesn’t translate well, so you won’t be playing synthesized Slayer riffs. That being said, Black Sabbath is fair game. And I won’t lie: Playing “Supernaut” on a Moog put a ridiculously huge smile on my face.

For slowly played pads and simple melody lines the new Jamstik is not just usable, but actually pretty great. And, while I might not trust it to play a live gig (not that I did that even in the pre-COVID days), it's definitely serviceable as a primary MIDI controller in a studio. You just might need to do a little tidying in post. (That said, turning down the string sensitivity in the Creator app did help clean up my MIDI data somewhat.)

The one thing it really can’t handle is drums. Now, you can play drums on the Jamstik. I just do not recommend it. At all. It’s a nightmare. MIDI guitars are pretty unforgiving if you’re sloppy. (Hello again :wave:) And sloppy playing can’t be easily covered up on a drum track. You could turn on some pretty aggressive quantization, but at that point you might as well program your drums manually. Honestly, you should probably just save yourself the hassle and get a pad controller.

So no, I’m not ditching my Push or my MPK Mini. But despite my initial skepticism I came away impressed. Where other guitar-style controllers feel like gimmicks that will inevitably end up collecting dust in a corner, I could actually see myself keeping the Jamstik Studio MIDI Guitar in easy reach. Heck, I might even consider taking it on vacation since it covers both my MIDI and guitar playing needs.

But -- and this is a big ‘but’ --  justifying spending $800 on this is hard. If you’ve already got a guitar laying around that you don’t mind making minor and temporary modifications to, the Fishman TriplePlay Connect will turn any guitar into a MIDI controller for $230. If you’d rather not risk leaving any adhesive residue on your precious instruments, and you absolutely must have a guitar MIDI controller, then this might be worth it.