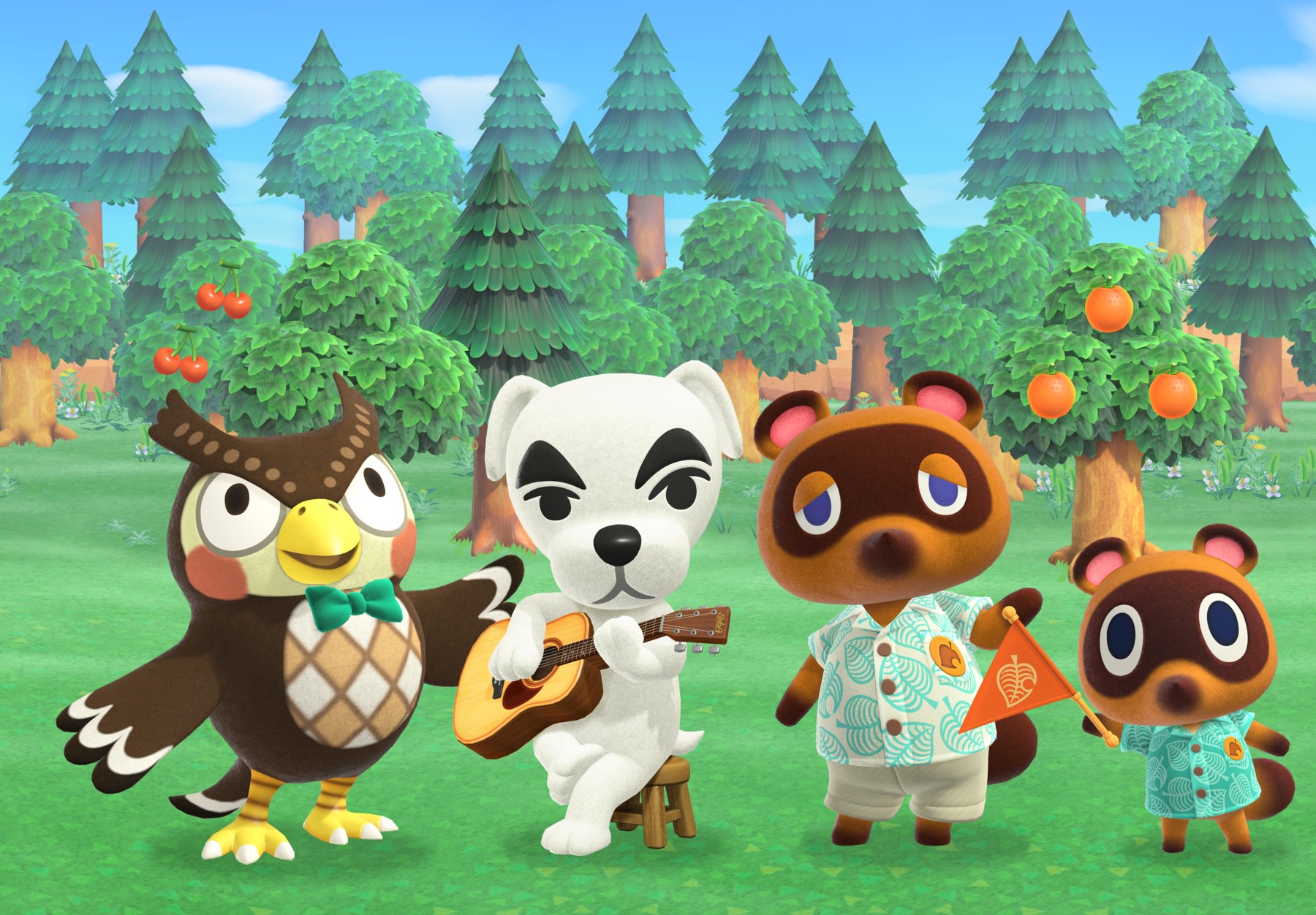 Every Saturday night, pop-punk icon Mark Hoppus does exactly what you’d expect him to do: He goes to a concert.

The Blink-182 frontman changes his clothes, tracks down a few friends and goes to watch another prolific artist. Over the past months, this singer-songwriter has not only enjoyed a titanic boost in exposure but has unwittingly strummed the soundtrack to a generation-defining pandemic.

The name’s K.K. Slider, the grooving, genre-bending canine troubadour and Animal Crossing fan favorite. For those unindoctrinated in the series’ latest, mammothly popular New Horizons title, the animated pooch visits your island once per week and jams a handful of songs from his extensive catalog: 95 original songs mimicking styles from Japanese folk to Mexican mariachi to American jazz. Players can also purchase his tunes to play on their in-game record players or stereos.

“We’ll all meet up on someone’s island, we’ll listen to four or five songs,” said Hoppus, who’s already notched more than 200 hours playing New Horizons. “It's kind of as close as you can get right now to hanging out with new friends, to going to a concert, to feeling like you're doing something fun, constructive and creative.”

It’s no secret that since its March release, New Horizons has provided a saving grace for millions of cooped-up, society-starved players. With record-breaking sales, unlikely celebrity fans and even a Saturday Night Live parody, the game is unquestionably 2020’s most ubiquitous pop-culture phenomenon (Netflix’s Tiger King docuseries notwithstanding).

But alongside the acclaim surrounding New Horizons’ breezy gameplay lies a deep affinity for the game’s sprawling soundtrack. Appreciation stretches far beyond name-brand musicians like Hoppus, Doja Cat and T-Pain: The ballooning remix-and-cover scene has taken the K.K. songbook and launched it into the sonic stratosphere. Artists who straddle the line between music and gaming are making thousands of revamps garnering tens of millions of views, like pop DJs swarming a viral Drake or Lizzo track. Just see Clay Kramer, who’s created nearly 50 brilliantly Slider-ized versions of real-world pop hits, from Ariana Grande’s “7 Rings” to the Beatles’ “Hey Jude.”

“The community surrounding this music is immense,” said Chris Davidson, founder of GameChops, a Philadelphia-based record label created specifically to release game remixes and covers. “People are listening to it when they’re not playing the game, there’s a big network of artists -- even those who don’t normally make video game music -- supporting it.”

Davidson started the label in 2011 to support his own work, under the stage name DJ Cutman. Now he touts more than a dozen signees who span the subgenre spectrum, from kitschy chiptune -- songs designed to mirror vintage 8-bit arcade songs -- to more explosive electro-house, dubstep and trap. The tracks range from specific reworks of preexisting tracks -- like this lusher take on the popular Animal Crossing cut “K.K. Cruisin’” -- to off-the-wall mash-ups like Travis Scott’s smash hit “Sicko Mode” merged with Slider’s patently nasal synth-tone vocal.

The label’s “Animal Crossing and Chill” playlist on Spotify -- more than two hours’ worth of game-dedicated remixes and covers -- is its fastest-growing compilation with more than 16,000 followers, Davidson noted.

Davidson has made a living solely off of his GameChops work since 2015. But is it even legal to profit off of Nintendo’s highly copyrighted melodies? Yes, Davidson assured, as long as you obtain the proper licenses, which he said are fairly simple to get.

As song sampling and remixing continue to boom across all genres, distribution platforms like DistroKid and Soundrop have built licensing requests straight into their systems: “You check a box, wait a week and your cover is cleared,” Davidson said. The fees are nominal too; DistroKid charges $12 up front per song per year while Soundrop takes a onetime $15 fee but also scrapes 15 percent of the song’s revenue.

Davidson said most licensing requests are approved without issue. After all, the song’s original creator earns a royalty percentage on every remix -- why wouldn’t they want free money?

Yet there’s always a fear that a gaming juggernaut like Nintendo could one day simply change its mind, in turn slashing his business to pieces.

“That’s the anxiety most remix artists have,” Davidson said. “We don’t have a direct line with these companies. I really wish Nintendo would take a more direct relationship with its fans.”

Maybe it's the three months of isolation talking, but there’s a certain homespun intimacy to K.K. Slider’s playlist that I rarely find in other game soundtracks. It’s as though his tunes were designed specifically for my living room, my island and my villagers alone. Especially those unembellished acoustic numbers he strums on his digitized guitar each Saturday -- it’s like Paul Simon was reborn a Jack Russell rock star.

Then there are the more intricate, genre-mimicking studio versions (also called Airchecks) that boom from the game’s stereo systems and illustrate the meticulousness that drives New Horizons. A personal favorite, “K.K. Jongara,” is a speedy and dramatic cut (reintroduced from 2013’s New Leaf iteration) that pits two shamisen -- traditional Japanese string instruments -- against each other in a breakneck melodic duel. While the song, like most of Slider’s music, serves no obvious in-game purpose, I revere these highly peripheral elements as small windows into other cultures, like globe-trotting Easter eggs. The same goes for “K.K. Bossa,” “K.K. Casbah” and “K.K. Tango.”

Qumu, a popular Scandinavian remix artist with 635,000 monthly Spotify listeners, explained how they take a well-crafted song like the popular Animal Crossing tune “Bubblegum K.K.” and make it their own.

“I transcribe it by ear, listening to different parts on repeat and writing down what I hear as MIDI,” they said. “I try out different instruments -- synth and drum sounds for the different parts -- and add transition effects, write harmonies and other elements, mixing the sounds as I go.”

“You can clearly hear and feel what the tracks are intended to sound like … I think it’s that lo-fi minimalism that makes it so translatable,” Qumu said.

“Nintendo holds this line so beautifully across almost all of their franchises where it's just melody, and they hit you over the head with its directness and simplicity,” he said. “The music is brilliant in that you can take it and run with it if you wanted to.”

Kazumi Totaka, the game's longtime sound director and the real-world songwriter behind all of K.K.'s tunes, rarely speaks of his work in public. But he did mention in an email to The Washington Post earlier this year the importance of subtlety in Animal Crossing: “We didn’t want to tell the whole story with music. Rather, we put the highest importance on composing music that shaped the space between the sounds.”

Jeffrey Melvin, better known as the up-and-coming EDM artist Melvv, knows the feeling. He’s been stuck in his Manhattan apartment for close to three months, but he has salvaged some sanity through Animal Crossing and Slider, whom he called “the Beyoncé of quarantine.”

“It's so universal in that it doesn't have a language,” he said, referring to Slider’s nonsensical “me-oh-gwei” singing style. “You can't even understand what he's saying, yet he plays literally every genre. Anyone can enjoy it.”

But when any piece of entertainment becomes as universally popular as Animal Crossing, there enters the doubts associated with flattery versus ironic mockery. How much of the game-adjacent music being created is actually credible art and how much is being pumped out solely as the latest offering to the meme gods?

"I don't appreciate [that] as much,” North said. “People know it’s a very effective social tool to take something popular and run with it."

Search for almost any hit song plus “KK Slider version” on YouTube and you’re likely to find both a thoughtful rendition -- accurate to both the original track’s melody and Slider’s sonic signature -- as well as a mimic that feels slapped together, with nothing done to elevate either side of the mashup.

How much of the game-adjacent music being created is actually credible art and how much is being pumped out solely as the latest offering to the meme gods?

Meanwhile Davidson bristles at the idea that remixers are going through all this trouble simply for comedy’s sake. “I have never met an artist who makes something they don’t like just because they think it’ll be popular,” he said.

Regardless of how ingenuous some cover artists may appear, a heap of un-ironic sincerity still fuels the K.K. boom. The YouTube super-producer Kramer, who declined comment for this story, posted a 12-minute video appearing to gush over the mastery of New Horizons’ soundtrack. Hoppus, a notorious punk-rock smartass, has spent hours on Twitch unironically playing the game and allowing other players to sell their turnips on his island.

Even Vincent Bennett, singer for the blistering Massachusetts heavy metal band The Acacia Strain -- who released band T-shirts featuring the iconic Animal Crossing character Isabelle -- was utterly genuine as he unpacked his love for the game.

“I think there should be a virtual K.K. Slider tour,” Bennett said. “Not just in the game but on Twitch or something.”

He continued, “It's not just the music in the game but the fact that there are instruments in the game that you can actively play. You can get a guitar, you can get a drum kit, you can put it all together, have a friend come to your island and you can all have a jam session. I think it's awesome.”

Bennett insisted that within his typically brooding metal community, he’s far from the only Nintendo-loving outlier.

“I know a lot of people who are just like, ‘I listen to death metal, I listen to grindcore, and I love Animal Crossing,’” he said. “They’re like, ‘Everything sucks. Pandemic sucks. My life sucks, my girlfriend left me. Animal Crossing rules.’ … I have a whole group chat, it's just like six different bands talking about turnip prices and what the Able Sisters are selling.”

In this article: Mark Hoppus, video games, animal crossing: new horizons, music, kk slider, longread, remix, animal crossing, feature, entertainment
All products recommended by Engadget are selected by our editorial team, independent of our parent company. Some of our stories include affiliate links. If you buy something through one of these links, we may earn an affiliate commission.