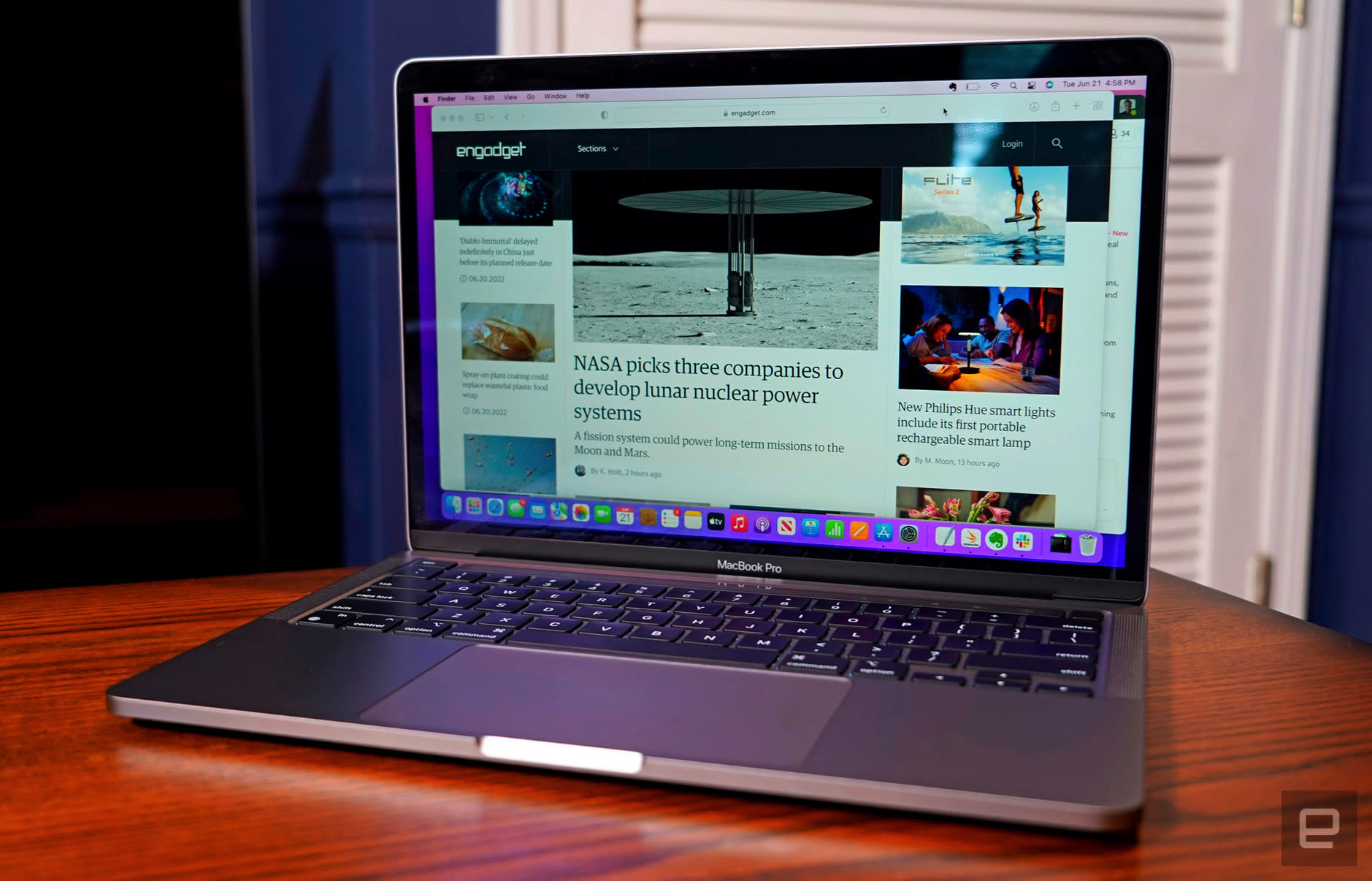 Say hello to Apple's most baffling laptop, the 13-inch MacBook Pro with an M2 chip. It was already a confusing computer when we reviewed the M1 model in 2020, which was out-shined by the fan-less MacBook Air. But now that there's a new MacBook Air with a bigger screen and a more modern design, the 13-inch Pro seems a bit like a relic from another era. It’s from a time when Apple had to build machines around Intel's hotter and less efficient chips, instead of taking full advantage of its own hardware.

To be fair, the 13-inch MacBook Pro is still a very nice computer, and the M2 chip gives it a decent performance boost. But it's also something I can't really recommend, not when the new Air offers so much more, and the 14-inch MacBook Pro has a far better screen, plus ports professionals actually need. Apple claims the 13-inch MacBook Pro continues to be one of its most popular models, and that's not too surprising since it's the cheapest "Pro" notebook in its lineup. Still, it's 2022, and this MacBook Pro design has been around for years. Popularity is no excuse for being lazy.

Now, I suppose it makes sense that Apple would coast a bit. The MacBook Pro's unibody aluminum case still outshines the vast majority of PCs on the market. And, given the many design and supply chain constraints we're facing amid the ongoing pandemic and chip crunch, it was probably smarter for Apple to focus on the new Air, as well as the 14 and 16-inch MacBook Pros. It's just a shame that those priorities left the 13-inch model with the same chunky-bezeled display and anemic port selection we've seen for years.

And no, the Touch Bar doesn't help the situation at all. Just when we thought we'd rid ourselves of Apple's second screen misfire, it's back to torture us again with disappearing function keys and constantly shifting app shortcuts. It's almost as if Apple had some leftover Touch Bar stock it just had to unload, and we’re paying the price. Developers aren’t doing much more to take advantage of it, so in several years it'll just be a useless appendage, like the last protohuman with a tail.

Now that I've gotten my frustrations out, we can talk about what's good: Apple's new M2 chip. It offers 8 CPU cores and up to 10 GPU cores, which Apple claims will deliver 18 percent faster multithreaded performance, and up to 35 percent faster graphics speeds. The real upgrade for Pros, though, is that it now supports up to 24GB of RAM (instead of being limited to 16GB), and also has double the memory bandwidth. Together with support for ProRes encoding and decoding, the M2 should make the MacBook Pro a far better option for video editors who don't want to make the leap to the pricier 14-inch model.

Our review unit, which featured the M2 chip (10 GPU cores) with 16GB of RAM and 1TB of storage, was noticeably faster in just about every benchmark. It scored almost 9,000 points in Geekbench 5's multi-core test, whereas the M1 MacBook Pro was closer to 7,000 points. The M2 chip also blew away the M1 in Geekbench's Compute benchmark, as well as Cinebench R23, where it scored 1,300 points higher than the M1 machine. The performance bump isn't enough to dump the M1 MacBook Pro if you've already bought one, but it's still nice to see Apple make some decent gains with its sequel chip.

Here's the thing: we haven't benchmarked the new MacBook Air yet, and based on my experience with the last model, I expect it to score about the same as the MacBook Pro. Once again, Apple's big selling point for this computer is that it has a fan and more elaborate cooling system, allowing it to handle sustained workloads like video encoding or 3D rendering. The MacBook Air is still fan-less, so it will likely throttle performance significantly as it gets warmer.

So sure, if you're a professional, the MacBook Pro is still a better bet. But if you need a computer for serious work, one that'll deliver far better performance today and last you a lot longer, it may make more sense to save up and invest in the 14-inch MacBook Pro. I realize for many consumers, that's not an easy choice to make. The 13-inch model starts at $1,299, while the cheapest 14-inch offering is $1,999.

But move beyond their base specs (the 13-inch starts with an anemic 8GB of RAM and 256GB of storage), and the cost difference is less stark. Bumping both systems up to 16GB of RAM and 1TB of storage raises the prices to $1,899 and $2,199, respectively. At that point, you might as well spend $300 more for the vastly more powerful 14-inch MacBook Pro with the better display.

After all, every other "Pro" Apple device has a ProMotion screen, which delivers high refresh rates for silky smooth scrolling. Why should the 13-inch MacBook Pro be left out? Its Retina Display still looks fine, but my eyes have been spoiled by Apple's modern screens. Omitting ProMotion is even more glaring now that Microsoft squeezed fast refresh rates into the Surface Laptop Studio. And we've seen plenty of gaming laptops, like the ASUS Zephyrus G14 and Acer Predator Triton 500 SE, that can easily double as productivity machines with fast screens.

Those computers also have far more ports that professionals would actually use. I was disappointed to see Apple reduce the 13-inch MacBook Pro to 2 USB-C ports back in 2020. Today, it just doesn't make sense for a "Pro" product. You'll lose one port whenever you're charging, and basically demands that you invest in a USB-C mini-hub. Anyone working with photos or video will need one of those accessories anyway, since there's no SD-card reader. (At this point, I'm grateful Apple is still including a headphone jack.)

There are elements of the 13-inch MacBook Pro I still like. Apple's build quality remains impressive, the keyboard and trackpad are fantastic, and the MacBook's speakers sound good enough to fill a small room. The battery life is also solid, lasting more than 17 hours in our benchmark. If you didn't know what you were missing from the other MacBooks on the market, then I'm sure you'd be happy with the M2 MacBook Pro.

Personally, though, I just want better for potential MacBook buyers. Why should they be stuck with the chunkiest screen bezels in Apple's laptop lineup? Why don't they deserve a high refresh rate screen? Shouldn't Apple devote more attention to one of its best-selling machines? The 13-inch MacBook Pro is fine, like I said. But it should have been so much more.