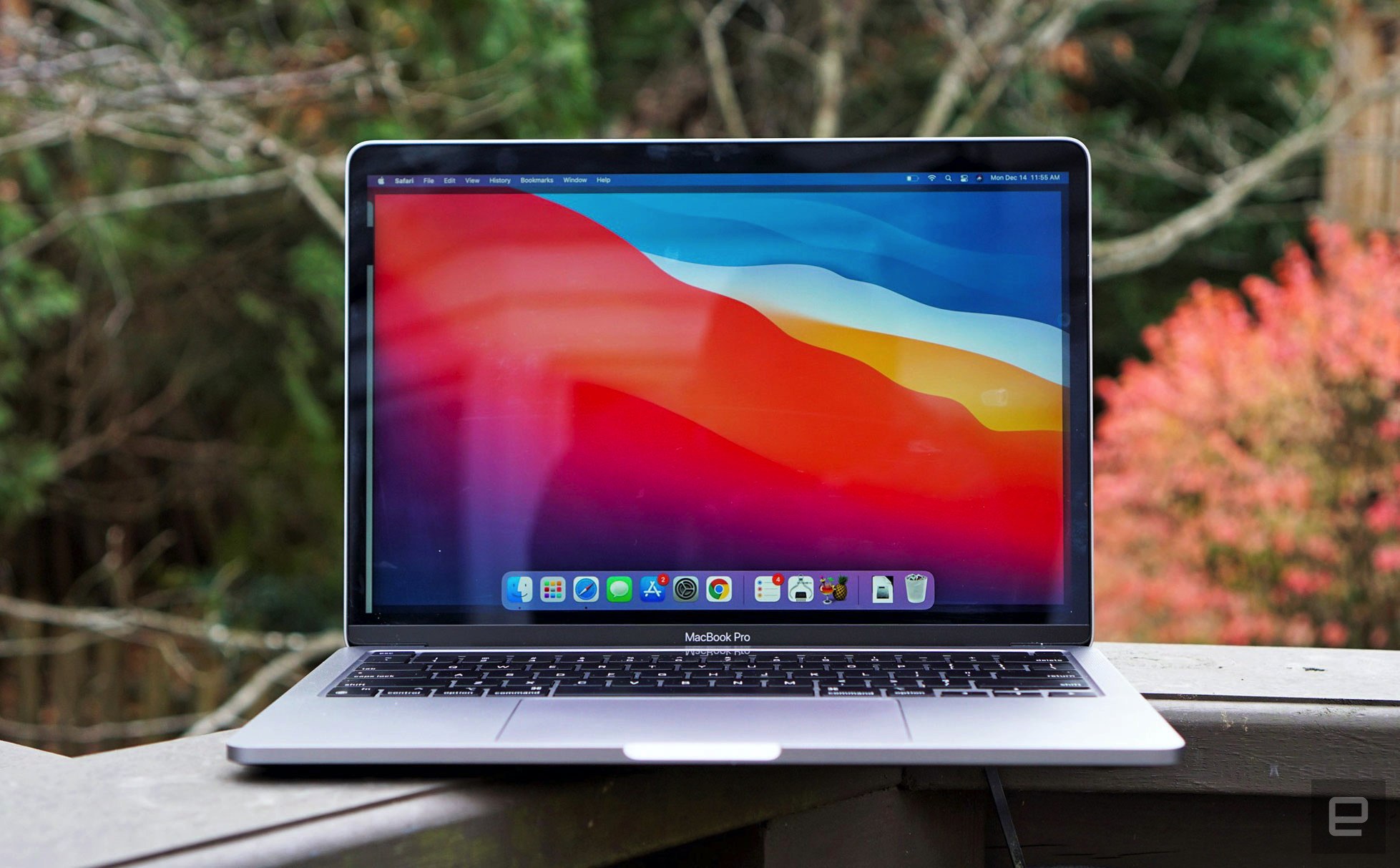 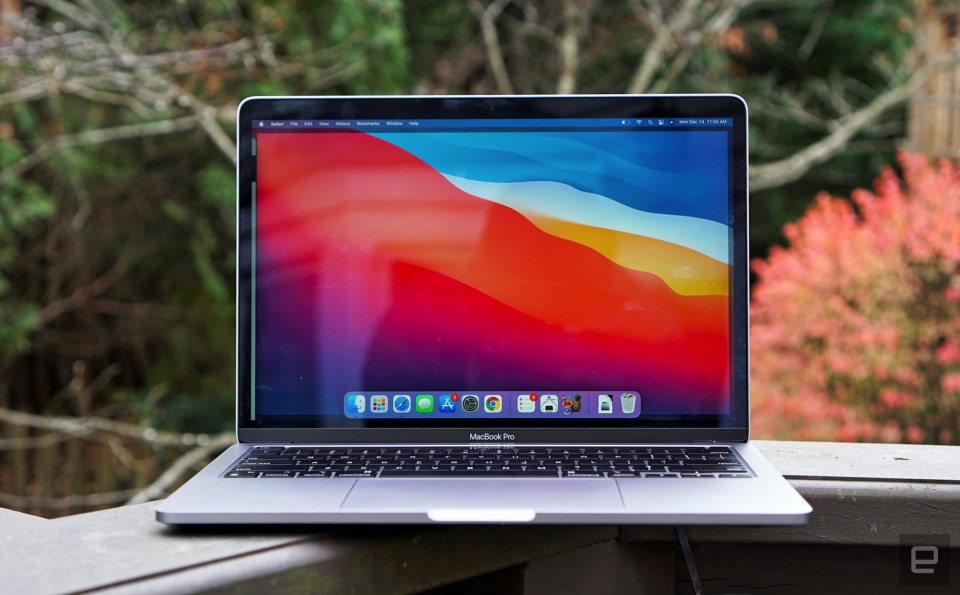 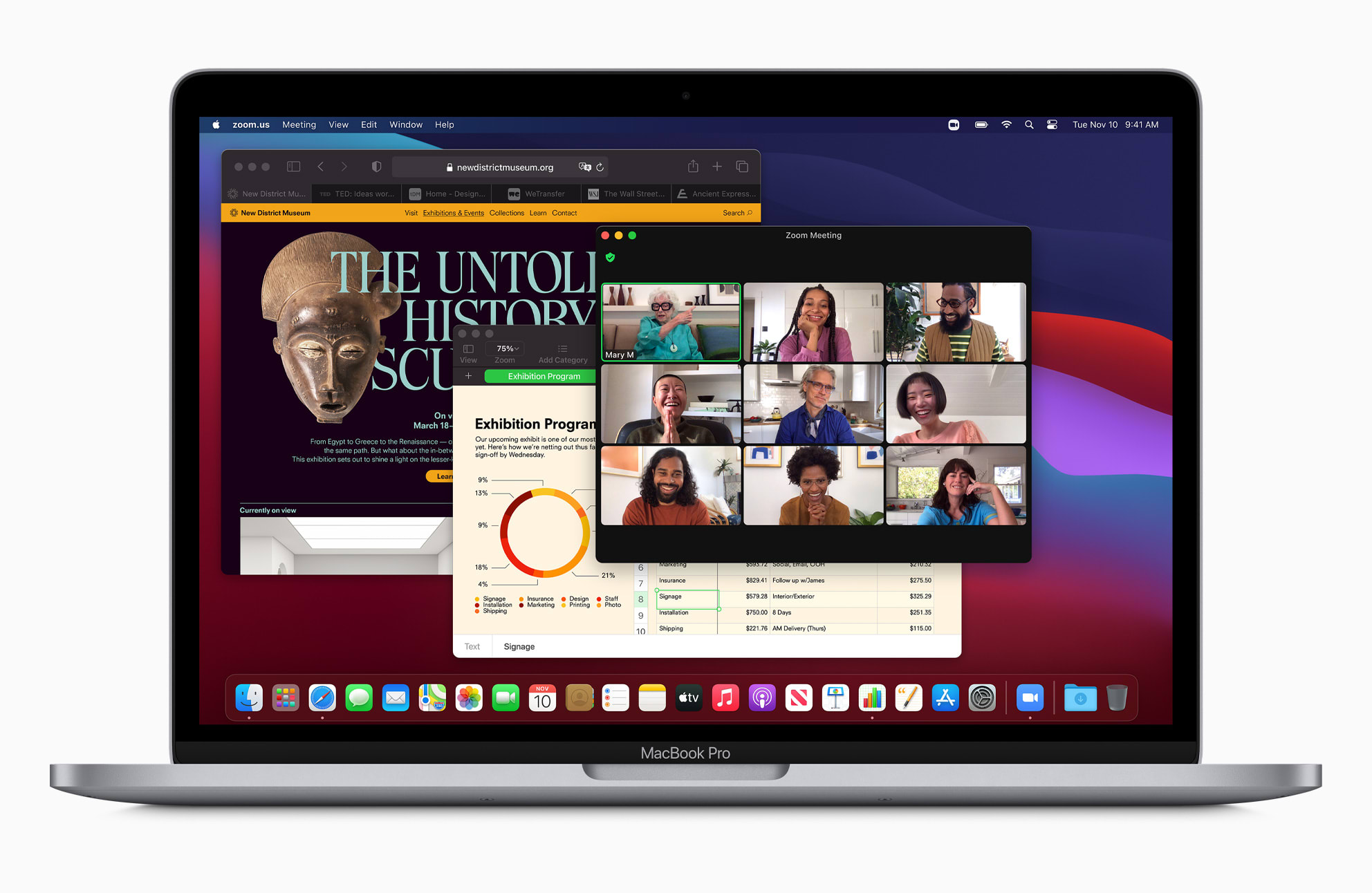 Apple's new MacBook Air proved that its M1 chip is a powerful beast, even in a thin and light machine. It's so good, in fact, it made me wonder if the M1-equipped 13-inch MacBook Pro could be much better. The M1 chip is the same across both machines, save for one missing GPU core on the base MacBook Air. So why pay more, especially when you can get an M1 Air for hundreds less than the equivalent M1 MacBook Pro?

The simple answer, really, is that you get a fan on the MacBook Pro, whereas the Air is cooled passively. That lone fan lets the Pro handle sustained workloads with ease, including lengthy video encoding or 3D rendering. You know, the sort of work done by exactly the sort of professionals Apple is targeting. The Air, on the other hand, is speedy at the start, but slows down if it has to stress itself for too long. The problem is, some of the  MacBook Pro’s other limitations may turn off the most demanding users.

Apple’s M1-equipped MacBook Pro is as zippy as we expected, delivering all of the features we appreciated from the updatedMacBook Air. But even though it’s a bit faster, it may be a hard sell for many professional users who require rock-solid compatibility and a lot of RAM.

How would you rate the MacBook Pro 13-inch M1?
We want to hear what you think. Post a quick review now to join the conversation!
Write a review 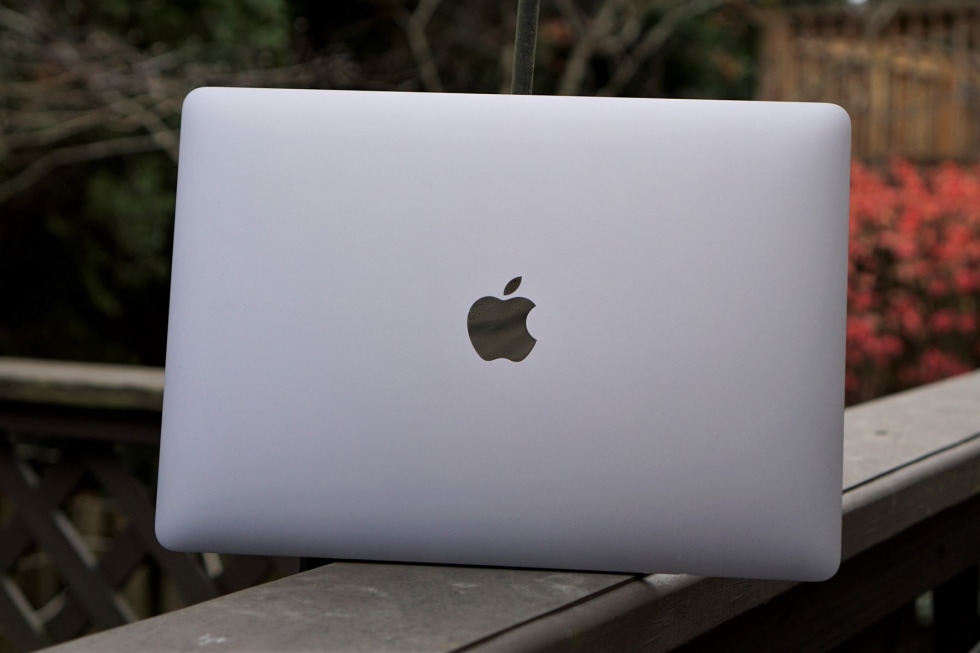 But let's cover the basics first. Like the M1-equipped Air, this retooled MacBook Pro is physically identical to the previous model. It has the same aluminum case; there are still only two USB-C ports; and it's pretty portable at three pounds. It would have been nice to see Apple attempt a serious redesign, especially one that further differentiated the Pro from the Air, which is a mere two-tenths of a pound lighter. Plenty of PC makers are pushing their 13-inch ultraportables below 2.5 pounds, so I'm sure Apple can manage that.

The MacBook Pro's 13.3-inch screen is 100 nits brighter than the Air's, but otherwise both computers share the same 2,560 x 1,600 Retina Display. The Pro also has Apple's Touch Bar, which provides touchscreen shortcuts for basic system functions and apps. I've never been a huge fan of the Touch Bar, but at least Apple has refined it a bit to make room for a physical escape key and power button/Touch ID sensor. Personally, the fact that the Air doesn't have a Touch Bar makes me prefer it even more. Beyond that, the MacBook Pro has the sam refined keyboard that Apple unveiled earlier this year, which is more comfortable and more reliable than the flat butterfly design.

Now let's focus on what makes this MacBook Pro so special: Apple's new M1 system-on-a-chip. That SOC packs a punch, with eight CPU cores and up to eight GPU cores. It's built on a 5-nanometer process, which is even more intricate than AMD's 7-nanometer chips. Intel, meanwhile, doesn't expect to have any 7nm hardware until 2022. By betting on a 5nm ARM-based design, Apple has managed to craft something that's both powerful and energy efficient. The only downside is that it's a completely different architecture than the x86 Intel chips Apple previously relied on, so older apps have to run through the Rosetta 2 emulator to function.

After being blown away by the performance of the MacBook Air M1, I expected the MacBook Pro to deliver a similar experience, with a bit more power thanks to its improved cooling. And that's pretty much what I saw over the past week with our review model, which was equipped with 16GB of RAM and a 1TB SSD alongside the M1 chip. The computer turned on almost instantly the first time I lifted the lid. And it only took a few minutes for me to get through the setup process.

Compared to Apple's recent intel-equipped MacBook Pros, the M1 model feels ridiculously fast. Apps launch within seconds; Safari loads enormous websites in the blink of an eye; and I can juggle a variety of software, including Evernote, Slack, Spotify and multiple web browsers without having the system break a sweat. I didn't run into any issues with the Intel emulation either. In most cases apps like Evernote felt even faster than on an x86 PC. Developers are also quickly updating their software to run natively on the M1. Even Google wasted no time delivering an optimized version of Chrome (after a slight hiccup).

Since the M1 chip is based on the same architecture as Apple’s mobile hardware, it can also run iOS and iPad apps. I didn’t find that to be very useful on the MacBook Pro, though — it was more of a curiosity. It’s also something developers can opt out of entirely, so don’t expect to find Google or Facebook in the Mac App Store.

You can play plenty of games on the MacBook pro too, thanks to the M1's powerful GPU cores. Just like on the MacBook Air, I was able to run Fortnite smoothly in 720p. That's impressive since it's running via Rosetta 2 emulation. But Fortnite is also pretty buggy, since Epic hasn't updated it in months due to its ongoing legal battle with Apple. Apple Arcade titles like The Pathless and The Last Campfire ran flawlessly at 60 frames per second, but that's not too surprising since they also run well on the iPhone and iPad. When it comes to gaming on computers, Apple has always lagged behind Windows PCs. But I wouldn't be surprised if more developers start paying attention to Macs now that they see what the M1 can do.

Even though it's equipped with a fan, I rarely hear it turn on. You really have to stress the M1 MacBook Pro with something like a lengthy video rendering job to make that spin up. And when it does kick in, it's far quieter than it usually is on Intel machines. That's likely because it just doesn't have to work as hard to keep things cool. Even under a heavy workload, the system felt warm to the touch, but not scorching hot like some earlier models. The MacBook Pro’s battery life is yet another example of how efficient the M1 chip can be. The system lasted 16 and a half hours in our battery benchmark, which involves looping a video at fixed brightness. At the end of a typical workday, it usually has around seven hours of juice left.

As impressive as this MacBook Pro is, I'll admit it doesn't feel much different than the M1 MacBook Air during normal use. The Geekbench and Cinebench R21 scores on the two systems are practically identical when it comes to single core performance, though I saw a noticeable bump when it came to multi-core speeds. Still, the fact that the Air is competitive at all is a testament to what Apple was able to cram into the M1 in the first place. But once you start looking at the M1 through the eyes of professional users, its flaws become more obvious.

The biggest issue: It's limited to 16GB of RAM, which means it's not ideal for working with large files or serious media work. The M1 chip also only supports one external display, so anyone sporting dual monitors on their desk is out of luck. (There is a workaround for more external displays using DisplayPort adapters and the DisplayLink software, but that's not officially supported by Apple.) There's also no support for external GPUs, something that's admittedly a bit niche, but a huge downside for anyone using those devices to beef up their graphics performance. All of these concerns are why Apple is still offering Intel-powered MacBook Pros, which support up to 32GB of RAM, multiple displays and eGPUs.

If you're a professional who relies on specific software and plugins, you may also run into issues with the M1's emulation. If you’re looking for an easy way to track which apps are optimized for M1 chips, or don’t work at all over Rosetta, be sure to check out the site "Is Apple Silicon Ready." At the time of this review, Avid Protools, Autodesk Revit and a slew of music apps still don't run properly on M1 systems.

Given all of these caveats, I'd recommend that professional users do some serious research before buying any M1 Mac, especially the MacBook Pro. If you're intrigued by the power of Apple's silicon, the MacBook Air may be the better option when you can snap it up for $1,449 with 16GB of RAM and a 512GB SSD. The MacBook Pro, meanwhile, starts at $1,299 with just 8GB of RAM and a 256GB SSD. You'll have to pay $1,699 to double both specs. And if you desperately need a new MacBook Pro soon for work, then don't count out the existing Intel offerings. They may have far weaker graphics than the M1, but at least there's no compatibility headaches involved.

While Apple’s M1 SOC made the MacBook Air feel revolutionary, it’s a bit more complicated on the 13-inch MacBook Pro. It’s still a fast and efficient machine, but there are more potential compatibility concerns for professionals. Still, if you’re one of the few power users out there who need something zippy, and don’t mind the limitations of the M1, the revamped MacBook Pro makes for a solid workhorse.

In this article: ultraportables, MacBook Pro M1, M1, MacBook Pro, Apple, review, gear
All products recommended by Engadget are selected by our editorial team, independent of our parent company. Some of our stories include affiliate links. If you buy something through one of these links, we may earn an affiliate commission.