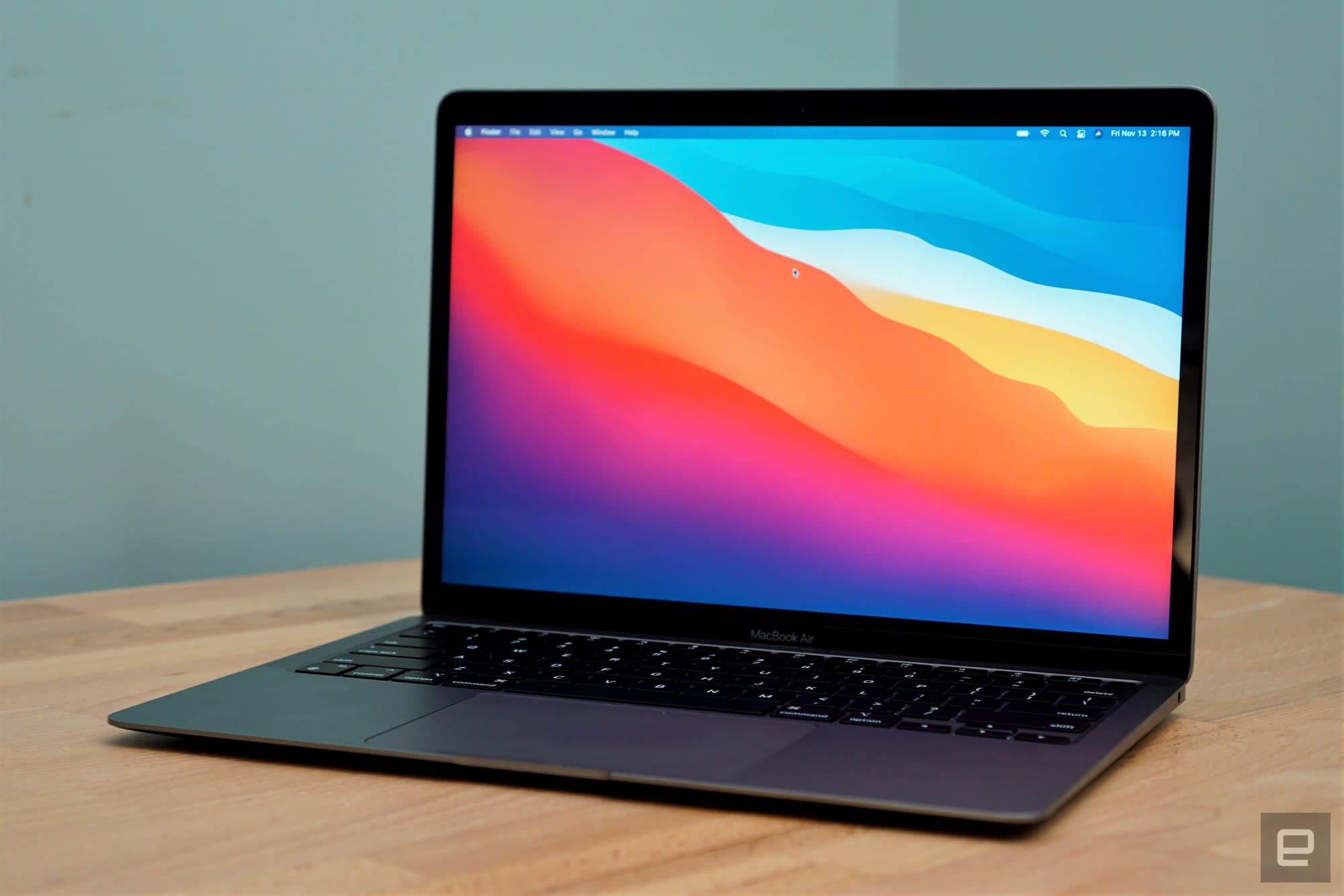 Apple's M1 chip redefines what an ultraportable can be.

Apple's new MacBook Air is stunningly fast. It's raring to go the instant you open its lid. Want to browse the web? Watch it load bloated sites faster than you've ever seen on a laptop. Want to play some games? Step back as it blows away every ultraportable, with no fan noise to get in the way. And if you need to take a break, don't worry. It's got enough battery life to last you all day. Using the new MacBook Air is like stepping into a new world where we can demand much more from ultraportables.

All of this is thanks to Apple's new M1 system-on-a-chip (SOC), its first for Macs. After more than a decade of building its own mobile chips, Apple has accomplished an impressive feat: It proved its computers no longer need Intel inside. 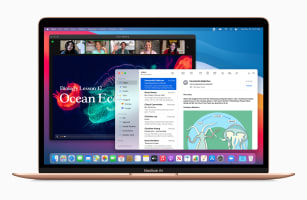 That's no small thing. In 2005, Apple embarked on a massive Mac platform shift away from Motorola CPUs to Intel's chips. All of a sudden, there wasn't that much separating Macs from Windows PCs (and because of that, we also got the ability to boot into Microsoft's OS with Boot Camp). The Intel partnership worked out well for Apple. It led to the introduction of the original MacBook Air in 2008 and the unibody MacBook Pro, notebooks which kicked off the ultraportable era and served as the new design standard for laptops.

But over the last decade, it's seemed like Apple has paid less attention to Macs as it focused all of its energy on the iPhone and iPad. The TouchBar remains incredibly divisive; the company stubbornly stuck with shallow, error-prone keyboards; and the less said about the "trash can" Mac Pro, the better. You can think of the M1 as a course correction: Now Apple has a way to genuinely innovate with every aspect of its Macs, right down to the design of its CPU.

The harmonious marriage between Apple's own hardware and software has always been the iPhone and iPad's biggest selling point. Sure, Android offers a lot more variety and customization. But if you want something excessively polished, your best bet is usually Apple. Now the company is basically bringing that same cohesive experience to Macs.

My first thought while using the M1-powered MacBook Air, surprisingly enough, was that it felt like an iPad Pro. It's shockingly responsive, as if it's awaiting your next command like an over-eager puppy. Running apps natively built for the M1, like Safari and GarageBand, felt just as fast as launching an iPad app. Safari, in particular, delivers the best web browsing experience I've ever had on a computer. Sites load up almost instantly, and scrolling through complex pages feels effortless. It's like seeing the web for the first time -- one unencumbered by the cruft of increasingly sluggish desktop browsers.

macOS Big Sur, the 17th edition of Apple's long-running desktop OS, is also fully optimized for the M1. You can feel that while merely browsing around the finder and system menus. There's no hesitation when swapping between apps, and as I mentioned, it wakes up the MacBook Air immediately when you open the lid. Again, I felt a very iOS-like sense of smoothness here. And during my testing, I never once encountered the dreaded spinning beachball of death, which I've grown all too used to seeing on my work-issued MacBook Pro from 2017.

Much like the switch to Intel CPUs, Apple's move to M1 means developers will need to completely rebuild their software to fully utilize the new architecture. It's a major difference under the hood, too, as the M1 is an eight-core chip based on an ARM design, which are typically found in mobile devices. Apple isn't abandoning apps built for Intel's x86, though. Its new Rosetta 2 emulator kicks in to run those older apps, and from my experience it works seamlessly, without any noticeable slowdown or hiccups.

Chrome and Slack launch quickly through Rosetta and don't exhibit any of the slowdown I’m used to on Intel Macs. Google's browser significantly lags behind Safari when it comes to loading web pages, but again that's also in line with what I've seen on every recent Mac. In a few cases, running emulated Intel apps felt even faster than using them on Windows PCs.  Here, Apple is leagues ahead of Microsoft, which failed to make Intel emulation work well on the Surface Pro X. Some apps just wouldn’t run at all. Whereas the M1 MacBook Air handles just about every app without a sweat.

And thanks to the M1 chip, you can also add iPhone and iPad apps to the list of things you can run on your Mac. I mainly used it for some 3DMark benchmark comparisons, but it's a nifty feature to have. Don't expect to see every iOS app in the Mac App store, though. Developers can choose to keep their apps out of macOS entirely, something both Google and Facebook have already done. So you can forget about having Instagram running alongside your inbox.

The M1 also gives the MacBook Air something it’s never had before: decent gaming performance. Apple's SOC offers up to 8 GPU cores (the base MacBook Air only has 7), and from my testing it blows away Intel's integrated graphics. I was able to run Apple Arcade titles like The Pathless with ease at 60fps, everything ran as smoothly as on my gaming PC. I suppose that's not a huge surprise, since Apple's A-series chips have always delivered solid performance on iPhones and iPads. But it still feels genuinely strange to have an ultrathin machine like the Air running complex 3D titles without breaking a sweat.

It even managed to play Fortnite at around 60fps while running at 1,400 by 900 pixels with high graphics settings. In comparison, it ran at around 40fps with Intel’s Iris Plus graphics on the last MacBook Air. I wouldn't bet on playing too much of that game on the MacBook Air for now though, as it's incredibly unstable. Epic stopped updating Fortnite on Apple's platforms in August, amid their ongoing legal battles.

For our review, I tested the pricier $1,249 M1 MacBook Air configuration with a full 8-core GPU, 512GB of storage and 16GB of RAM. I realized almost instantly that the new chip turned it into a speed demon, but I was still shocked when I saw its Geekbench 5 scores: It was faster than every other PC we've reviewed this year when it comes to single core performance. It even beat out Intel's NUC 9 Extreme, a machine that's basically a portable desktop. The MacBook Air was only outmatched by some of Intel and AMD's fastest chips — the i7-10875H and Ryzen 9 4900 — on Dell's XPS 17 and ASUS' Zephyrus G14 when it came to multicore performance. These are stunning results, and it's even more impressive when you consider this is the weakest version of the M1. I can only imagine what Apple's SOC will look like on beefier systems like the MacBook Pro.

Another shocker: the MacBook Air delivers this performance without a fan. It just relies on a heatsink and passive cooling, like the iPad. That's great news for anyone tired of MacBooks that sound like they're getting ready for takeoff. Dell's XPS 13 2-in-1 from 2017 was one of the last fanless PCs we reviewed, and while I liked that machine, its Y-series Intel chip was undoubtedly sluggish. Apple has proven that slim machines can both be powerful and run efficiently. So much so that it lasted 16 hours and 20 minutes during our battery benchmark, which involves looping an HD video. That's around five hours more than the last Intel-based MacBook Air, and it puts the system among the longest lasting PCs we've tested.

I haven't talked much about how the new MacBook Air looks and feels, but that's because it's the same as the last MacBook Air we reviewed. It's still thin and light, at 2.8 pounds. The unibody case feels as sturdy as ever. And it also has the same excellent keyboard, which has a satisfying amount of depth. Additionally, the 13.3-inch Retina Display looks fantastic -- it's ideal for binge-watching videos -- though I would have liked to see Apple shave down more of its side bezels like Windows PCs. And, speaking of disappointments, I would still like to see more than two USB-C ports for accessories.

The M1-powered MacBook Air feels like an enormous leap forward for Apple in every way. But should you dump your current Mac for it right away? That's a bit more complex. While it’s far faster than the last MacBook Air, that's still a solid machine that'll last you for years. But if you've got a system that's several years old, or you're looking to move over from an aging Windows laptop, the Air is certainly compelling. While it starts at $999, I'd recommend going for the $1,249 model for 512GB of storage and an 8-core GPU. Both models come with 8GB of RAM, but you can upgrade to 16GB for an additional $200. That's worth springing for if you plan to use the Air for serious work.

One thing is clear now: With the M1 chip, Apple finally has a way to truly differentiate Macs from Windows PCs. Now there's more of a reason to opt for a Mac, beyond a slightly different OS and Apple's excellent build quality. The M1 chip makes the MacBook Air one of the fastest ultraportables you can buy today. And even the biggest Windows fans will have a hard time denying that.