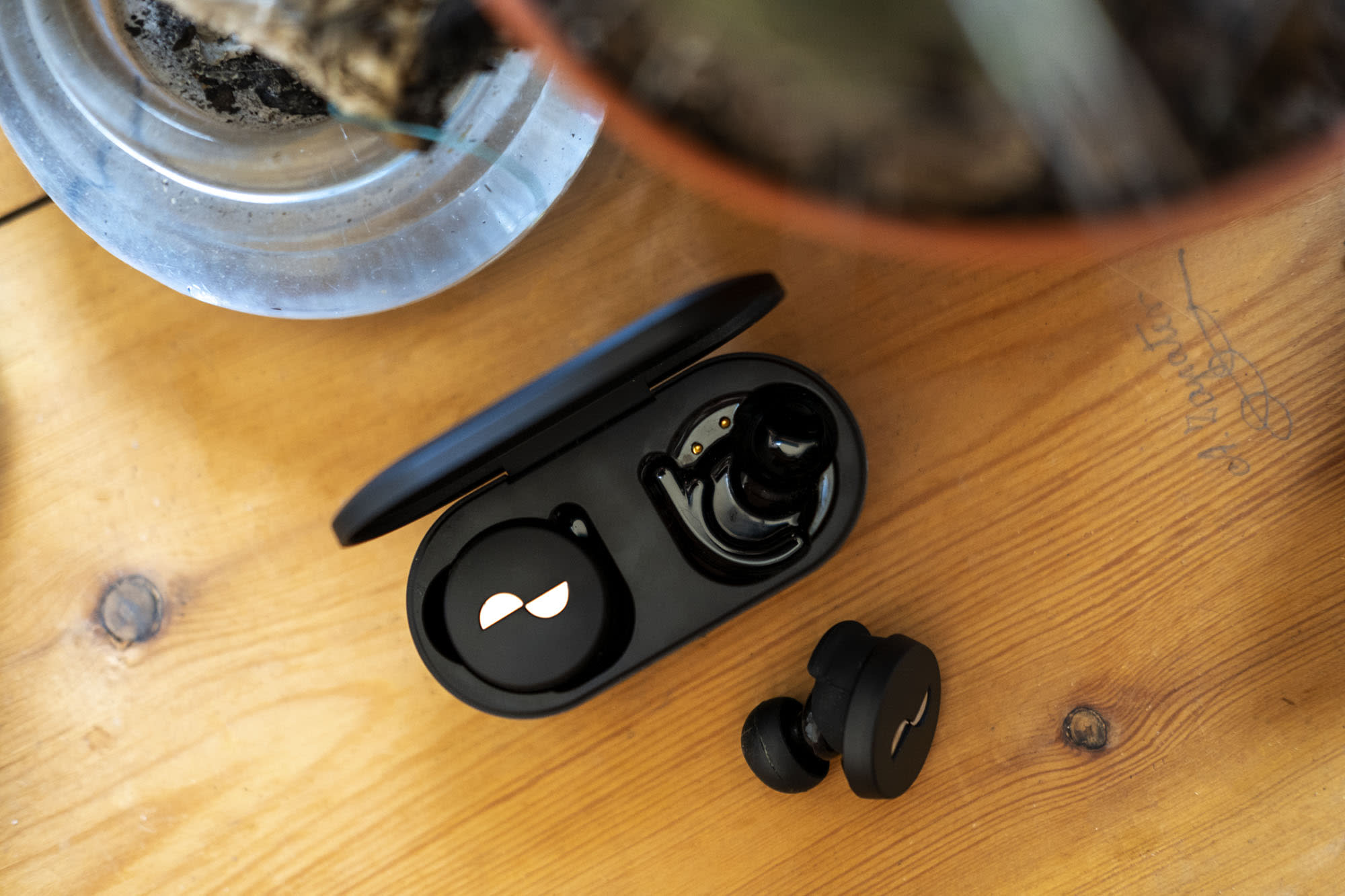 Nura might be a relatively new name in headphones, but the personalized-audio specialist is already revealing its third model: the Nuratrue. As the name suggests, the latest member of the family is a true wireless set (and the company’s first model without a wired option). As you might expect, Nura’s flagship automatic hearing test (for sound tailored to your hearing) is here, along with many other features the company has already made synonymous with its brand. But with a smaller form factor, are compromises inevitable?

The Nuratrue ($199/£199) is a simplified version of the Nuraphone over-ears and the Nuraloop wireless (but tethered) sports buds. As mentioned, the audio customization feature is present, as is the “ambient” mode — which Nura calls “social mode.” There’s even Active Noise Cancelling and “immersion” mode, which simulates the feeling of being at a live event. The last two are a little simplified compared to their bigger siblings, though.

The original Nuraphone’s immersion mode delivers tactile bass with transducers creating a sensation of volume and presence similar to being in front of a large speaker. On the Nuratrue, it feels more like a bass “boost” feature you might find on an equalizer. Active Noise Cancellation on the Nuratrue works pretty well, but is tied to the social mode feature which means they are activated as a pair. This makes no real functional difference, but something to bear in mind. Battery life is estimated at six hours here and seems accurate, which can be extended to around 24 hours via the charging case.

If you were a fan of the Nuraloop, you might have expected the Nuratrue to be broadly the same, minus the connecting cable. But you’d be wrong. The new buds barely share any visual or physical DNA with their cabled sibling. Instead the Nuratrue has a much larger, circular body which sorta looks like you’re wearing “plugs,” but in the middle of your ear. This extra size might sound like a negative, but it makes them easier to touch (for controls) and likely helps keep them wirelessly connected to each other.

That “touchability” is important, as, like most TWS earphones, it’s how you’ll interact with them — in particular, for activating things like immersion or social mode. (ANC can only be toggled via the app it seems, and as mentioned disables social mode with it). In my testing with them the touch was more responsive than most other TWS headphones I’ve tried, especially the tricky double-tap which I find often requires a few attempts to register correctly. As with all Nura headphones you can easily assign different tasks to either side for both single and double taps, making it easy to have the controls you use the most at hand (or finger, technically).

Obviously, the main selling point here is Nura’s proprietary audio personalization. The ability to create personal hearing profiles is kinda Nura’s whole thing. It’s a feature you see on other brands, too, but Nura’s is the simplest and, in my experience, the most reliable. Mostly, because it doesn’t involve any subjectivity. Just pop the buds in your ears, walk through the profile creation process in the app and the headphones do everything else. Most other similar “tests” require you to tell the app how well/if you heard something. As someone who’s done more than their fair share of hearing tests, I always start imagining phantom sounds and worry that affects my results.

Cool features are… cool and all, but you probably just want to know how they sound? I guess the smart answer is, that will depend on your ears. The slightly more helpful answer is that, for me, the personalized audio definitely puts the Nuratrue above most of the TWS headphones I have tried. It’s not that they have better bass or polished treble, although those would be fair statements, it’s more that they feel neutral and balanced.

Whereas “unpersonalized” buds may be technically balanced on a graph, I know that my hearing isn’t perfect and thus might be slightly worse at certain frequencies. With Nura’s personalized tuning, it’s hard to know what frequency curve I am getting, or even if that’s what my hearing really “needs” but what I do know is that I like it!

Now, I guess I should also say that I am never sure just how effective Nura’s hearing test really is. The company claims that it uses otoacoustic emissions to determine the characteristics of your hearing. The same test is sometimes used to determine cochlear hearing loss in newborns. That said, every time I’ve been to an audiologist (which is more times than I would like) I have asked them about using OAE tests for headphones, and all of them have been skeptical it can be done on hardware at this price. When I asked Nura about this, they gave the following reply:

“The OAE signal produced by a person's ears is indeed faint - much like the signals of GPS satellites are faint by the time they reach the Earth's surface. That's why GPS-enabled devices of 20-15 years ago were much larger, less accurate, and took longer to acquire a signal than today's smartphones or even smartwatches. Similar advances in signal processing have enabled the huge improvement in GPS device performance and the quick & reliable measurements of OAEs in devices as small as Nuratrue.”

In short, the company claims that advances in technology have allowed for the test to be practical in small, consumer devices.

Back to the physical design briefly. It might not be for everyone, but it feels very much in keeping with Nura’s apparent mission to do things a little bit differently. I’ve never really found a TWS design that I think has fully cracked it (although Jabra’s Elite 75t comes close?), and that’s true here. But, as mentioned earlier, I do appreciate the large surface area for controlling playback or activating/deactivating the extra features. Extended wear remains comfortable, and the fit works well for my ears.

If I had one minor gripe, it’d be the maximum volume. It’s not low. In fact, for me, it’s more or less ideal for comfortable, extended use. It’s just that, “comfortable” is the maximum, so when a song comes on that I really love and I decide that, heck, I can crank this one up a bit before going back to normal levels… there’s nowhere to go. Again, this might not be an issue for you. I’ll be the first to admit I probably haven’t done my ears any favors over the years, but it was something I noticed fairly quickly in my time with the Nuratrue.

Update (8/27/21): Nura has since released a firmware update that increases the maximum volume by 6dB, solving this minor gripe.

In an ocean of true wireless headphones, it’s hard to stand out. But Nura’s personalized audio is certainly enough to do just that. Of all the “customizable” headphones I’ve tried, Nura’s are still the ones to beat. And with the Nuratrue priced at least $80 cheaper than the flagship models from Sony, Sennheiser and Bose, that’s just another easy way for the company to garner attention.

The Nuratrue is available starting today.