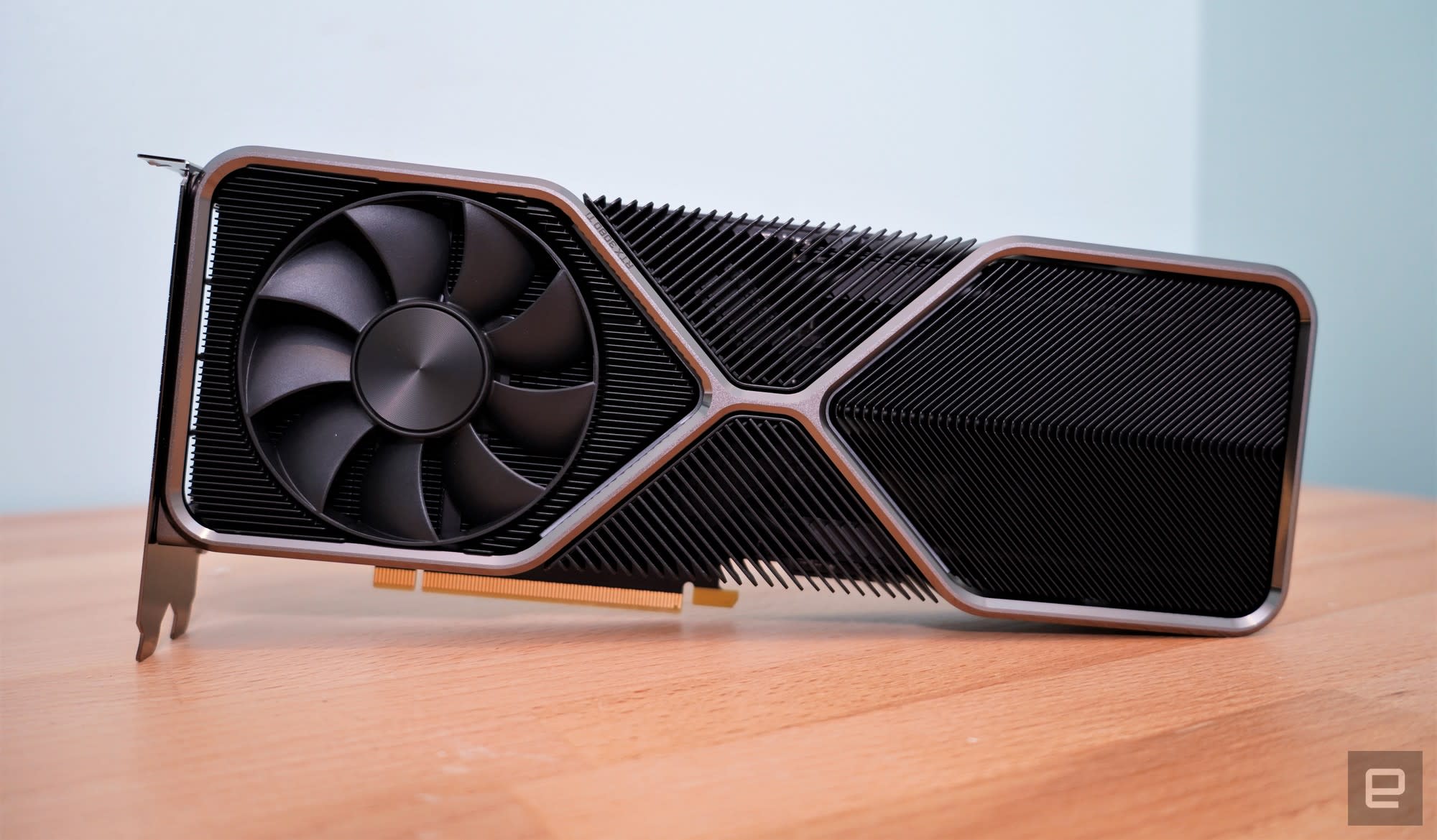 But good luck getting one for retail price.

NVIDIA's goal with the RTX 3080 Ti is obvious. After launching the RTX 3080 last year for $699, and the wildly powerful yet expensive RTX 3090 at $1,499, the chip giant is filling that pricing gap with an $1,199 card. It's also throwing a bone to loyal RTX 2080 Ti customers, who had no clear upgrade path with this latest generation of GPUs. But is it really worth $500 more than the excellent RTX 3080? That depends on many factors, but mostly the size of your wallet and your patience for fighting other buyers in the cut-throat GPU marketplace.

As we pointed out when the RTX 3080 Ti was announced, it's undoubtedly the worst time to buy a new video card. Manufacturers can't make enough to keep up with demand, which means scalpers are making a killing by quickly snapping everything up and reselling at a premium. At least the RTX 3080 Ti, and its less powerful sibling the 3070 Ti, are hash limited, so they won't be of any use to cryptocurrency miners.

Given the state of the market, though, you can expect to spend a lot more than $1,199 if you do find a 3080 Ti. And things are even worse if you look to eBay and other secondary sellers, where the midrange, theoretically affordable $499 RTX 3070 is selling for upwards of $1,500. That's the price of an entire computer! But if you're willing to step into this world of madness, at least the 3080 Ti is a capable performer.

All benchmarks run at the highest graphical settings on a PC powered by a Ryzen 7 5800X and 32GB of RAM.

So sure, it's fast. But what really makes the 3080 Ti stand out from the rest of NVIDIA's sub-$1,000 lineup is its ray tracing performance. In the Port Royal RT benchmark, it reached 12,948 points — but most importantly, it averaged a steady 60fps for that test. In comparison, the 3080 hit 11,623 points at a 54fps average, while the 6800 XT hit just 9,104 points at around 42fps. Benchmark scores are nice for comparing performance figures, but it's framerate bumps that you'll actually notice.

Similarly, the 3080 Ti also tackled Control's demanding ray tracing well. It reached 85 to 90 fps in 1,440p with maxed out graphics and medium ray tracing settings. While impressive, though, that's only 5 to 10fps more than what I saw on the 3080. Oddly enough, both cards delivered similar performance while playing in 4K with NVIDIA's DLSS technology, which upscaled the rendered graphics from 1,440p. I was able to crank the ray tracing settings up to high and still see a steady 65 to 70fps on the 3080 and the 3080 Ti. It could just be that game isn't fully optimized for NVIDIA's faster hardware yet.

Given that the 3080 Ti is in many ways a 3090 crammed into a 3080 case, cooling could be an issue down the line. In my chilled basement office, which hovers around 20 degrees celsius (68 Fahrenheit), the new card peaked at 78c under load. That's 2 degrees more than the 3080, which wasn't too concerning, but I noticed that the fans ran louder and more often on the 3080 Ti. I'm sure many gamers won't mind as they're wearing headphones much of the time, but the heat could be a bigger issue for anyone in a warmer room, especially during the summer.

If heat isn't a concern, the 3080 Ti may end up being a reasonable compromise for anyone who can't quite fit the massive 3090 in their PC case. At the very least, you'll be able to save quite a bit of money. While the 3090 launched at an eye-watering $1,499, it's now going well above $2,000 in stores when it's in stock (which is rarely), as well as for over $3,000 on eBay. Personally, even at the unicorn-like retail prices, the RTX 3080 seems like the best option for most high-performance gamers. You'll get close to the performance level of the 3080 Ti while paying significantly less.

This is the point where I have to reiterate: For all that's holy, try to avoid buying a new video card anytime soon. Both AMD and NVIDIA are dealing with a supply crunch, due to rabid demand and pandemic manufacturing difficulties. It may be worth holding out until the end of the year until prices stabilize. If you can't help but wait, and you're fine sacrificing cash to the capricious GPU gods, the 3080 Ti is a powerhouse GPU that'll satisfy any demanding gamer.