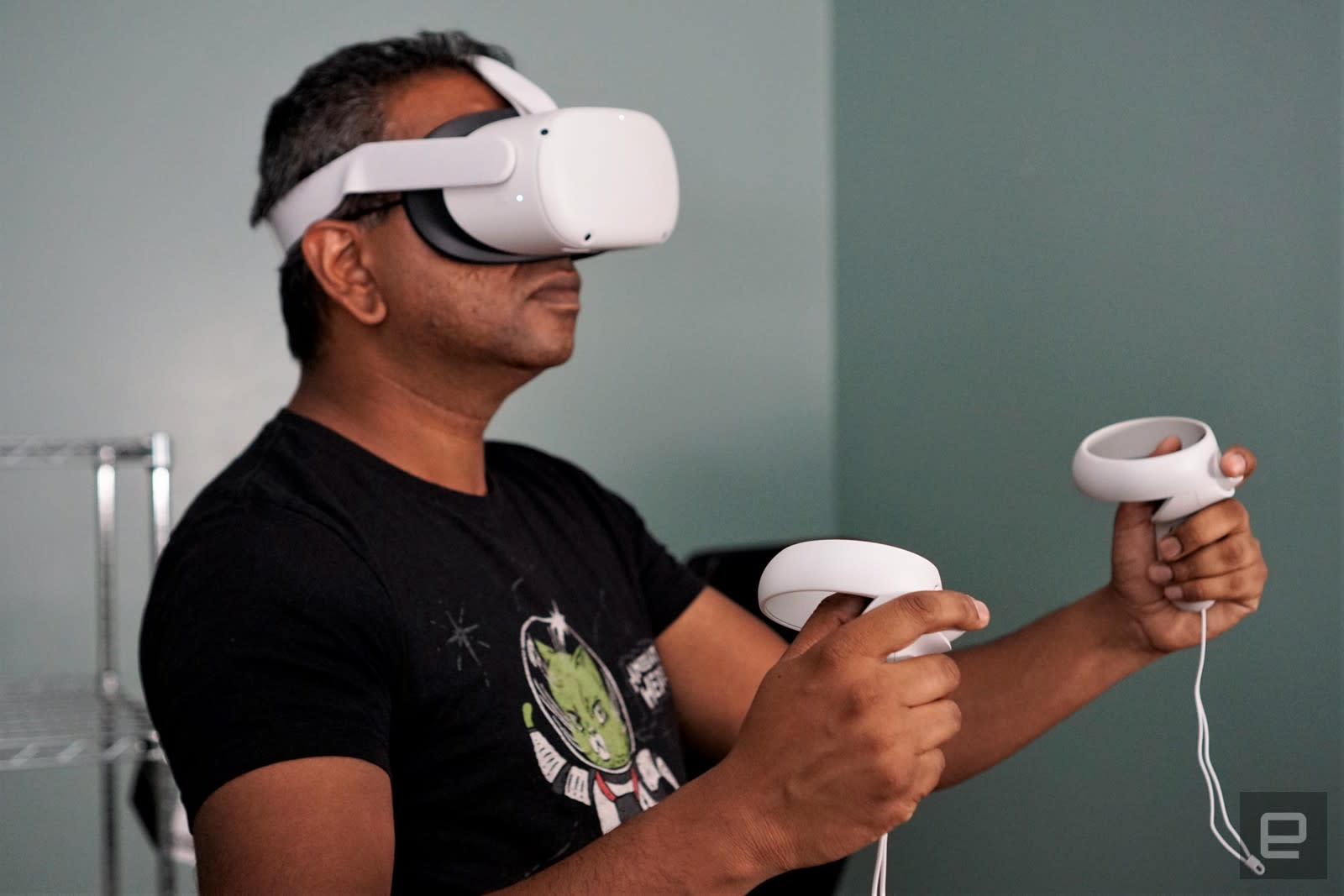 Oculus Quest 2 review: The $299 VR headset to rule them all

It's a huge upgrade in every way.

What a difference a year can make. When I reviewed the Oculus Quest, I called it a remarkable step forward for VR, but one that was limited by the mobile chip powering it. Then came Oculus Link last fall, which essentially transformed the Quest into a PC VR headset when it was hooked up to a computer. All of a sudden, it went from being a severely restricted device to one with nearly limitless potential.

Now with the Oculus Quest 2, Facebook is making an even bigger bet. It features vastly improved hardware that makes both standalone and desktop virtual reality…. well, more realistic. It’s more comfortable and customizable. And it starts at $299 — $100 less than its predecessor. It's truly the one VR headset that can do it all.

The first thing you’ll notice about the Oculus Quest 2, though, is that it looks strikingly different than the last model. Facebook opted for a light grey color scheme, giving it a more Apple-esque consumer friendly vibe. And the stiff head strap has been replaced by flexible cloth, making it easier to fit on a larger variety of users. The Quest 2 is also smaller than before and around 10 percent lighter, fixing one of the biggest issues I had with the original. It still looks unmistakably like a VR headset, but one that isn’t just made for gamers.

But just because Facebook is aiming for a broader audience doesn't mean it's forgetting about VR diehards. The Quest 2 features the company's sharpest displays yet: fast-switching LCDs with a resolution 1832x1920 per eye. It offers 50 percent more pixels than before, though those LCDs won't offer the same black levels as the OLED screens on the original Quest.

There's also support for a 90Hz refresh rate down the line, which will bring the Quest 2 more in line with desktop headsets (and will make it even more useful when connected to a PC). Unfortunately, it's launching with a 72Hz refresh rate, and it's unclear when we'll see the 90Hz upgrade. You can get a taste of the faster refresh rate by enabling it in the Quest 2’s experimental features. But at launch, that only works in the headset’s menus and web browser.

The Quest 2 is powered by Qualcomm's Snapdragon XR2 processor, which is a significant power boost from the aging Snapdragon 835 from the last model. And it also packs in 6GB of RAM instead of 4GB, giving it more breathing room for complex games.

Basically, Oculus seems to have addressed many of our concerns with the first model's hardware. There's even IPD (interpupillary distance) adjustment with support for 53mm, 63mm and 68mm settings. That's useful for aligning the lenses with a variety of eye sizes. Changing IPD is a bit frustrating compared to the original Quest though. It involves physically moving the lenses and manually checking the screen for visible improvements. It took me around five minutes to lock in the ideal IPD setting -- but that’s also after I’ve spent years fiddling with IPD across a wide variety of headsets. VR newcomers will likely have trouble figuring out which setting works best.

One huge bummer? You have to sign in with a Facebook account to use the Quest 2. I had to merge my Oculus account into my personal Facebook profile just to review the headset. None of this is too surprising, since Facebook announced it would start making this transition in August. But it’s still annoying if you’ve tried to stay away from the social network, but also want to dabble in VR. I wouldn’t call this a dealbreaker, though.

Putting on the Quest 2 for the first time was another exercise in frustration. After installing the glasses spacer beneath the face cushion, I still had trouble fitting it over my large Warby Parker frames, which was never a problem with the last model. And once it was on my head, it took some fiddling to tighten the side straps. They're far from intuitive, and sometimes required me to remove the headset to adjust. Thankfully, I didn't have to touch them after the initial setup -- they’re flexible enough to stretch as I put the headset on, and snap back into place afterwards.

The Quest 2's top strap, meanwhile, is meant to be adjusted frequently. It's a simple velcro affair that pulls the unit back so it rests on your face. These things are basically just heavy plastic shrouds for holding phone screens right near your eyeballs. Comfort is key.

Despite my trouble getting the fit right, I'm happy to report that the Quest 2 is far less painful over prolonged sessions than the original Quest. It was far too heavy, and no matter how much I adjusted the straps, it either placed too much pressure on my nose or around my eyes. The Quest 2, on the other hand, feels more reminiscent of the original Oculus Rift. There's still plenty of weight on the front of the device, but it's just balanced better.

For those who prefer the original Quest's stiffer headstrap, Oculus will offer an "elite" upgrade for the new headset. You can also grab a battery pack for the back of that strap, which will act as a counterweight and double your playtime. I didn't get to try those out during, though, and it's unclear when they'll actually ship. But Oculus reps say they're adamant about offering more fit choices this time around. It's also building alternative facial interfaces that are wider and narrower than the one bundled with the headset, and other companies may offer their own accessories too.

Comfort seems to be the focus for the Quest 2's controllers too. Oculus basically went back to the original design of the Rift's motion controllers. They're larger than before, but still light and easy to hold. And best of all, the company brought back the extra bit of space next to the gamepad buttons, which serves as a convenient thumb rest. The Quest's controllers were solid, but they always felt like a watered down version of what the Rift got.

So what's the VR experience actually like? Simply put: It's better in every way. No matter what you're looking at, from simple text to the trippy environments in Pistol Whip, it all looks significantly sharper and more detailed. While the Quest 2 doesn't have the same allure of being the first standalone headset, it’s ability to bring us into VR wirelesslly continues to amaze me. After years of setting up finicky sensors and wearing headsets with Alien-like cables hooked up to beefy gaming rigs, the ability to just slip on a sleek device and step into VR is simply remarkable. And it's even better now with all of the new hardware upgrades.

The stark, low-polygon aesthetic of Superhot shined even more on the Quest 2. I could make out enemies more clearly as I smashed bottles over their heads, and I was able to target far off baddies with ease. And I couldn't stop staring at the level of detail for my bird companion in Falcon Age (that extra resolution makes petting it feel even more rewarding). I didn’t have any issues with motion sickness, but then again that’s never bothered me much with VR. (The 90Hz refresh rate upgrade will also help alleviate that down the line.) The Quest 2 gets a bit warm while gaming, but not enough to make you sweat. And I was surprised that I could play for around two hours at a time without feeling fatigued.

The new strap design also changed the way I used the Quest 2 when it came to consuming media. I could just lay down, rest my head on a pillow and enjoy the wonders of 360-degree videos on YouTube or The Legend of Korra on Netflix. That was harder to do with the first Quest, since it was tough to relax while its stiff strap was clamped to your skull. I was also able to binge more easily, since the Quest 2 typically lasted around two and a half hours on a single charge.

Still, at the end of the day, there are limitations to what Oculus can do with mobile hardware, even if it's a more powerful chip. Moss, a game I absolutely adore, felt stripped down compared to its desktop version. On the Quest 2, the textures looked muddy and simplistic. The environment also lost a lot of the detail and charm I loved so much. But on the plus side, if you've got a decently powerful gaming PC, you can just plug in the Quest 2. After playing 15 minutes of Moss in standalone mode, I connected it to PC and was instantly thrust into the lush magic-filled forest I remembered.

Okay, not everyone has a beefy rig, I get it. But the magic of the Quest 2 is that it can adapt. Are you a serious gamer who wants a decently affordable VR headset that can sometimes go wireless? Or are you a more casual user who mainly wants to play Superhot and dive into 360 degree videos? Either way, it's got you covered.

It's hard to deny the value the Quest 2 packs for $299. That's what you'd pay for some Windows Mixed Reality headsets, but most of those have trouble measuring up to our favorite headsets, like the original Rift, the HTC Vive and Valve's Index. The base Oculus Quest 2 comes with 64GB of storage, which is enough to keep a handful of games on the system. But if you're planning to be a power user, especially in standalone mode, then it may be worth shelling out $399 for 256GB.

Oculus is also pushing the Quest 2 to consumers in a much bigger way. Facebook will be manufacturing even more units this time around, whereas it could barely keep up with the demand for the first Quest. And it's making a bigger push into Japan, the holy land of gaming, with titles like a Little Witch Academia racing game. The company is clearly focusing on the Quest 2 as its premiere device for the next year, and it even plans to stop selling the Rift S next spring. (Good riddance, I say.)

At the end of last year, I argued that2020 was going to be a make or break moment for VR.Half-Life Alyx proved that there was certainly a market for high-end VR games, but I was still hoping to see some major hardware innovation. The Quest 2, in many ways, was the unicorn I was waiting for. It can bring easy to use VR to the masses at an affordable price. But it’s still capable enough to satisfy demanding gamers.