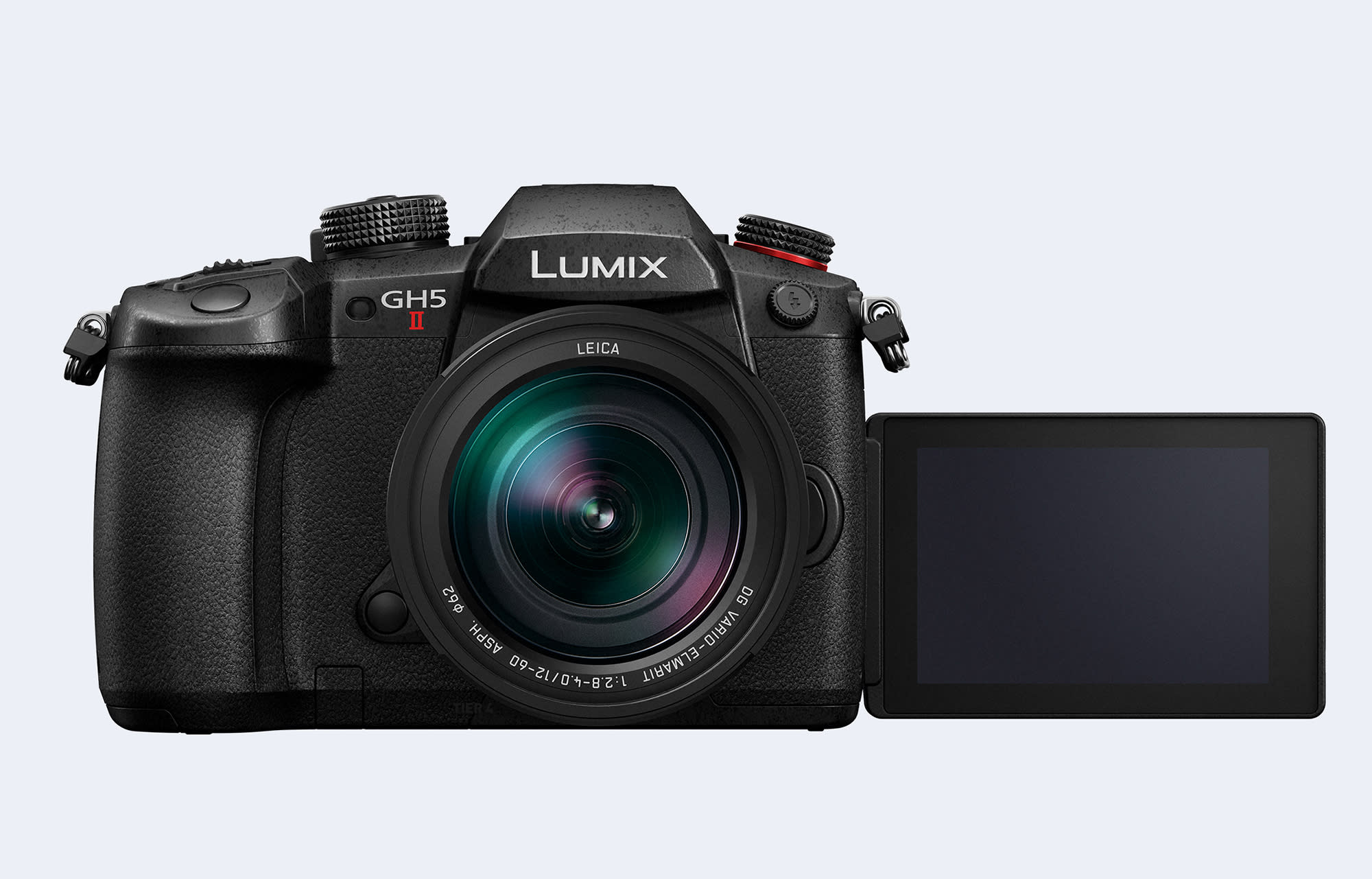 To the surprise of pretty much no one (leaks, yo) Panasonic has unveiled the GH5 II, a refreshed version of its stalwart GH5 video and vlogging camera. The new model has the same body and 20.3-megapixel sensor as before, but adds some new video capabilities, improved stabilization, live streaming options and more. It arrives at the same time that Panasonic announced development of its next Micro Four Thirds flagship, the GH6.

The key new feature for video users is the addition of internal 10-bit 4:2:0 60p 4K/C4K video (with no crop), along with V-LogL that isn't a paid upgrade. And unlike the GH5, the GH5 II can record internally in those modes at the same time it outputs 10-bit 4:2:2 60p 4K/C4K to an external recorder. It also boosts 10-bit 4K anamorphic shooting from 30 to 60 fps. However, there's no sign of ProRes RAW recording on the GH5 II, even though Panasonic just introduced the feature on the GH5s via a firmware update.

Buyers can download 35 conversion V-LogL LUTs for free, getting different looks without the need for color grading. Like the GH5s, the GH5 II comes with a view assist to make V-LogL monitoring easier on set. If you'd rather shoot footage that can be used immediately, it offers two types of Cinelike presets to warm skin tones, boost contrast, and more.

Another key feature is improved Dual IS 2 optical image stabilization (OIS). Where the GH5 offers 5 stops of shake reduction, the GH5 II boosts that to 6.5 stops whether or not lenses have OIS, while allowing for better stabilization in the telephoto range for OIS-equipped lenses.

Panasonic improved the GH5 II's autofocus capabilities for video, promising double the face and eye tracking recognition speeds and improved performance when a face is tilted (features also coming to the GH5s via a firmware update, by the way). It can recognize human bodies, track faces better in groups and do head-tracking to keep a subject in focus if they turn around. It also offers animal tracking that works with most types of pets and some wildlife species. On the photo side, it can follow small subjects better and refocus quickly if it loses a subject.

The new model comes with a 1,840K dot high-visibility fully-articulating monitor, compared to the GH5's 1,620K dot model, while the 3.68 million dot EVF is unchanged. It also keeps the same dual UHS II card slots as the previous model, but Panasonic has boosted it to V90 speeds (300 MB/s) from V60 before.

The GH5 II uses the new 2,200 mAh DMW-BLK22 battery introduced with the S5 camera, giving a mild 10 shot boost over the last model when using the EVF, or around two hours of continuous video recording time. Unlike the S5, however, you can still use your GH5 batteries in the GH5 II. If that isn't enough video recording time, the new USB-C PD port supports fast-charging and power delivery, though you'll need a 9V 3A charger capable of 27W at a minimum.

Panasonic added a new sensor AR coating that helps suppress flares, while boosting dynamic range by a third of a step over the GH5s for more detail in sky and clouds. Other new photo/video features include linear settings to make manual focus easier, a "live view composite" time lapse mode for night shooting in cities (coming later in a firmware update) and new shooting assist functions including red and blue frame indicators when recording or streaming.

Speaking of, the other key update to the GH5 II is the improved live streaming capabilities. You'll be able to set the camera to stream directly over wired or WiFi connections at up to 1080p, with no need for a PC. Panasonic promises "easy" WiFi streaming to YouTube, Facebook, Twitch and other apps using the Lumix Sync smartphone app.

Streamers using a PC can copy stream settings from a Mac or Windows 10 computer to an SD card, directly connect the GH5 II to a router and stream directly from the camera. It'll also offer USB tethering via a 4G/5G smartphone link and wired IP streaming with the RTP/RTSP live streaming protocols.

Some Panasonic fans were disappointed when GH5 II leaks surfaced, believing that it was a disappointing successor to the GH5. With the announcement of the 5.7K-capable GH6, however, Panasonic has made it clear that a better flagship camera is coming down the pike — while the GH5 II is intended to be a budget model aimed at vloggers, video shooters and streamers. The GH5 II is now available to pre-order for $1,700 (body only) or $2,300 in a kit with the H-ES 12-60mm f/2.8-4 lens.