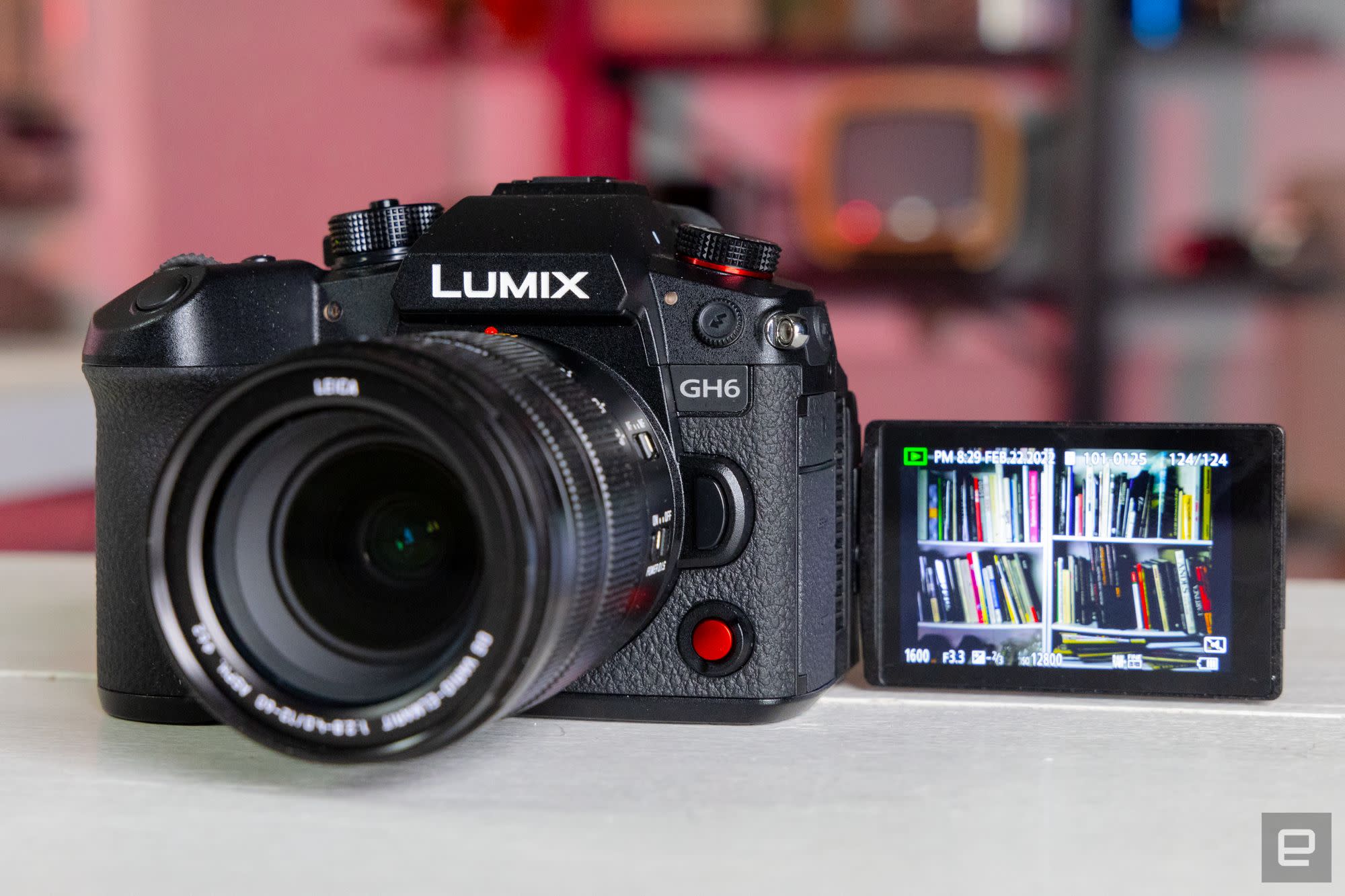 After a bit of a delay, Panasonic has finally revealed the 25.2-megapixel GH6, the highest-resolution Micro Four Thirds mirrorless camera to date. One can think of it as a mini version of its S1H "Netflix camera," as it's loaded with pro video features like 5.7K ProRes V-Log video, a tilt-swivel display and CFexpress capture. However, it's still stuck with contrast detect rather than phase detect autofocus like most modern cameras. Luckily, I was able to get my hands on a preproduction unit to check out the new features and get an early feel for it.

First, let's talk about the most interesting changes. As mentioned, the GH6 has a 25.2-megapixel sensor with a high-speed readout, though it isn't stacked like its Micro Four Thirds rival, the OM-1. That obviously gives a much-needed image resolution boost, though photo burst performance is actually down a touch from the GH5 II (8 fps with continuous AF compared to 9 fps).

The GH6 still uses a contrast detect autofocus system (what it calls "depth from defocus" or DFD) rather than phase detect like nearly all its rivals. As with the GH5 II, it also includes face/eye/head/body/animal AI recognition. While Panasonic has pretty much perfected its DFD system, it's still not as fast or reliable as phase detect systems.

When shooting people pictures in relatively low light, it sometimes failed to get focus quickly enough to nail the shot, for instance. By comparison, Sony and Canon's latest cameras (the A7 IV and EOS R6) have no such difficulty, even in low light. And I still saw some wobble and hunting with video AF — though it's much less than on any previous GH cameras.

All of the 5.7K and 4K modes (including 120p) use the full sensor width with super-sampled video. It also supports 5.8K up to 30p and 4.4K up to 60p in 4:3 anamorphic modes, with granular controls for different anamorphic modes and lenses. While ProRes/ProRes HQ is limited to 5.7K for now, it'll come to 4K via a future firmware update.

Also coming via a future firmware update down the road is the ability to record ProRes RAW to an external Atomos recorder. More interestingly, the GH6 is one of the first mirrorless cameras with HDMI 2.1 output, so it'll eventually let you record 4K RAW externally at up to 120 fps via another future update. When it first ships, it'll support 4K at up to 60 fps, with simultaneous external and internal recording.

In terms of video quality, Panasonic is promising 12+ stops of dynamic range using ProRes and V-Log recording, or 13+ stops using dynamic boost range (more on that in a sec). It also claims you'll see less noise at higher ISO settings (ISO 6400 and up). For both video and stills, it wasn't quite as good in low light as the GH5s (which has less than half the resolution) but it wasn't far off.

Capturing 5.7K video at up to 30 fps in ProRes HQ uses internal data rates of 1,903 Mbps, far beyond SD UHS II capability. As such, the GH6 is the first Micro Four Thirds mirrorless camera with a CFexpress Type B card slot. That's required for ProRes recording and many of the MP4 high-frame-rate codecs.

The drawback right now is that there's only one CFexpress slot, so you won't be able to get a backup for certain video resolutions unless you use an external recorder. However, the GH6 will eventually support recording to an external SSD recorder via the USB-C 3.2 port, which also allows you to power the camera while shooting.

If you're concerned about rolling shutter with the extra resolution, the high-speed sensor readout is supposed to reduce that more than ever. I confirmed that rolling shutter was very manageable, even at the highest 5.7K and 60p resolution. However, it is present if the camera or subject move too quickly.

As with past GH models, video quality is outstanding, with the 5.7K video particularly sharp and useful for editing. The ProRes option has also saved me an extra step compared to the GH5s, as I no longer need to transcode video. The drawback is that the video files are 4-5 times the size — so you'll want to invest in high capacity CFexpress Type B cards, which can get very expensive.

An interesting new feature is called dynamic range boost. When you activate the setting, it'll use two analog circuits at different ISO settings to take two different exposures. The result is improved dynamic range in scenes with bright and dark areas, without any excessive noise, though it's limited to ISO 2000 and up. I found it to be very useful for interior shots with bright sunlight coming through windows, making it possible to recover highlights and detail.

The GH6 has five-axis in-body stabilization like the other models, but now offers up to 7.5 stops of shake reduction with supported lenses, just behind the 8 stops on Canon's EOS R6. With boosted IS and E-stabilization, it really smooths out video well even for situations like walking, better than most mirrorless cameras I've used.

The GH6 kind of looks like the GH5 II, but it's quite a bit heavier (823 grams compared to 727 grams with a battery and memory card), and the body has changed in several notable ways. It's much thicker, to start with, thanks in part to an active cooling fan that ensures the GH6 doesn't suffer overheating issues like Canon's EOS R5 and R6. To that end, Panasonic is promising unlimited recording in all video modes, including 5.7K 60p and 4K 120p.

The other major change is with the grip that's considerably deeper than on the GH5 II (or GH5 and GH5s. With that, the GH6 is considerably more comfortable to use than any Micro Four Thirds camera I've tried, particularly with large lenses. Panasonic has made a number of other changes to the button and dial layout as well, most notably with the addition of a dedicated audio button that let you change things like gain levels and quality. It also has an extra record button on the front of the camera that's extremely handy for vlogging .

The GH6 now has a tilt-swivel display like the SH1, with the same 1,840K dot resolution as the one on the GH5 II. That makes the camera thicker, but more practical for low angle and other types of shooting, and the tilt option keeps the screen from being blocked by cables if you use an external recorder. It's also Panasonic's brightest display yet, and was highly visible even in sunlight.

The 3.68 million dot OLED electronic viewfinder (EVF) is unfortunately unchanged from the GH5 lineup. While it's true that the GH6 is more of a video than a stills camera, a lot of shooters prefer to use an EVF in bright sunlight, so a sharper image would have been nice. Also unchanged is the BLK-22 battery that delivers fewer shots than the GH5 II (380 compared to 410) and slightly less shooting time — likely due to the fan and extra resolution.

The GH6 has a couple of other serious downsides compared to rivals. One of them is the relatively small sensor size compared to a full-frame camera. That offers fewer creative possibilities, though it's also more forgiving in terms of focus and makes for cheaper, lighter lenses.

The biggest flaw, however, is the contrast-detect autofocus. The good news is that Panasonic seems to have finally realized that buyers want phase detect and hinted that it's not out of the question for future models.

The GH6 was rumored to be priced at $2,500, but there's some good news on that front. It's now on pre-order for $2,200 (body only) with shipments set for March, making it relatively cheap compared to any to models that can match its video specs. It looks a solid choice for video shooters, with quality on par or superior to any rivals — as long as they're okay with the contrast detect AF. I'll take a closer look at everything in Engadget's upcoming review.