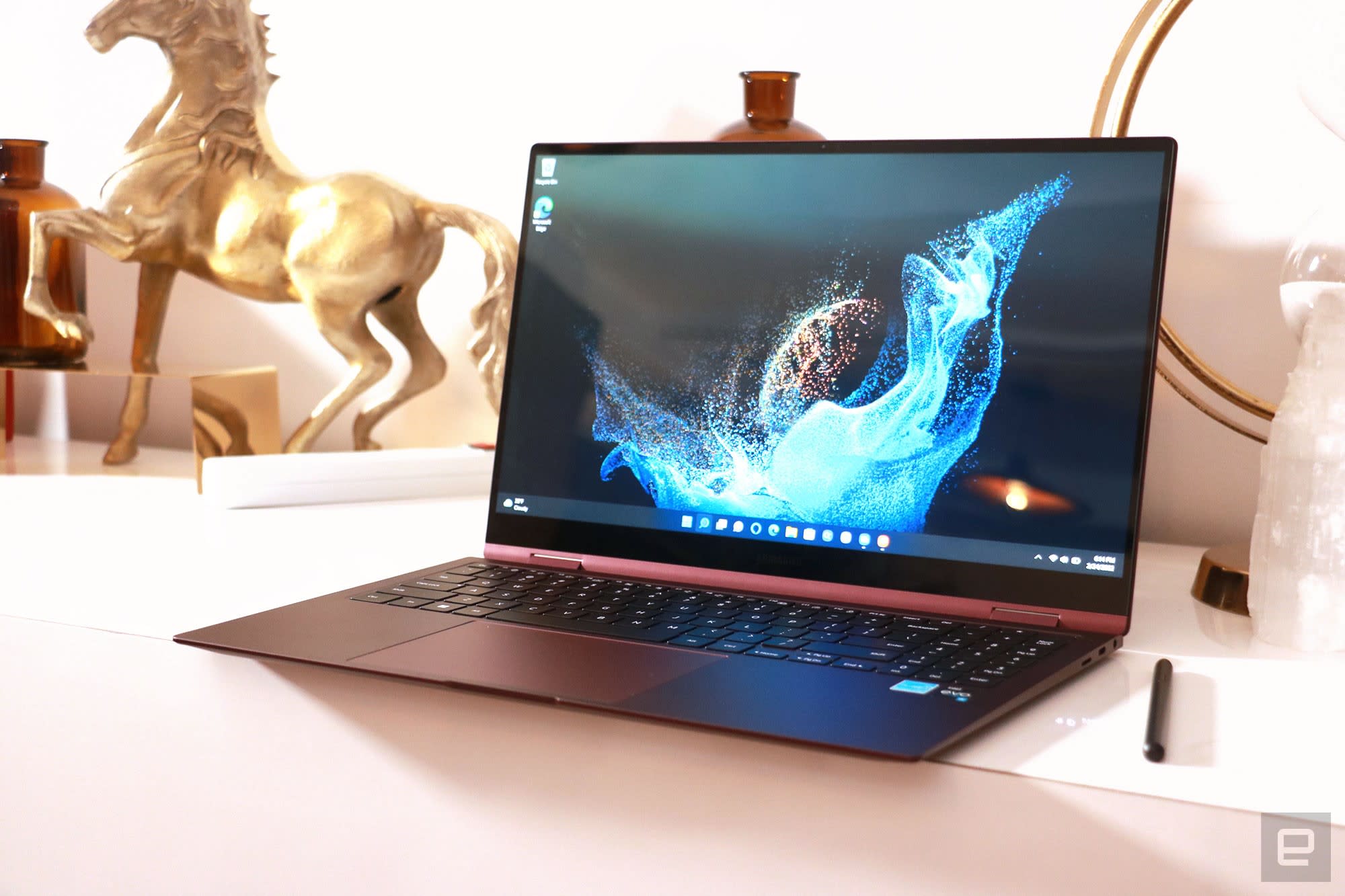 And a beautiful burgundy colorway.

Samsung may be best known for its Galaxy phones, TVs and household appliances, but I think its laptops deserve more recognition. At MWC 2022 today, the company unveiled the next generation of its Galaxy Book series of PCs. Last year’s models brought vibrant AMOLED panels while maintaining strikingly sleek profiles. This time around, the new Galaxy Book 2 series offers upgraded webcams and processors, improved S Pens and a gorgeous new burgundy color option

At the moment, there are three models in the lineup: the convertible Galaxy Book 2 360, the clamshell Galaxy Book 2 Pro and the Galaxy Book 2 Pro 360, which is not only a mouthful of a name but also a high-end 2-in-1. They all sport 13-inch screens, with the Pro and Pro 360 also coming in 15-inch versions. A fourth “Business” model is coming later this year, and it’s the only 14-inch option of the lot, which is interesting given the laptop industry has generally been moving towards that size.

Like most computers launching this year, the Galaxy Book 2s run Windows 11 and come equipped with Intel’s 12th-gen Core i5 or i7 processors. But Samsung’s strength is, as always, in its displays and this year's AMOLEDs can hit up to 500 nits of brightness, making for easier viewing in challenging lighting conditions. At a recent hands-on one evening in New York, I wasn’t able to take the machines out to read under direct sunlight as the sun had already set. In the brightly lit demo space as well as under our spotlights, though, it was easy to watch videos on the Galaxy Books.

Like I said last year in my review of the Book Pro 360, the new model’s 16:9 aspect ratio feels outdated in an era where most laptops have shifted to 16:10 screens. This leaves a thumb-wide bezel below the display that could otherwise display a few extra lines of text at least. Still, they all run at 1,920 x 1,080 which is probably a more power-efficient option than 4K for machines that are this thin and light.

I also enjoyed the vibrant colors on the AMOLED panels (which support HDR), almost as much as I enjoyed scrawling “I love cake” on them. The Book 2 Pro 360 comes with an S Pen, while the 360 supports it but doesn’t ship with one. The Pro, meanwhile, isn’t touch-enabled and doesn’t work with the stylus. There’s not much new about the S Pen here — Samsung says it's improved the latency, though it hasn't shared details beyond that. The pen is still a separate accessory that you might leave behind by accident. I miss when Samsung included a smaller version of it in an onboard slot in the Galaxy Book Flex.

Besides the new chips and brighter displays, the main upgrade for this generation of the Galaxy Book is higher-resolution webcams. Specifically, all three models now offer 1080p cameras that, based on my limited experience so far, already take better pictures than their predecessors. Samsung had aggressive beauty filters built into last year’s Galaxy Book Pro 360 for some reason, resulting in poorly exposed pictures from its 720p camera. This time, thankfully, the camera app looked like the stock Windows version with no strange filters on my face.

In fact, it seems like Samsung’s cleaned up its software in general. Things from previous models like a faux privacy screen and a security feature that would snap pictures of people making failed login attempts were nowhere to be seen. That doesn’t necessarily mean they’re gone — I didn’t have time to hunt them down during the hands-on. But the demo units presented a fairly clean Windows 11 experience, from what I saw.

The last new offering in the Galaxy Book 2 is a burgundy color option (limited to the Pro 360) and I am ashamed to admit this might be my favorite thing about Samsung’s latest laptops. It’s the same shade as you get in the S22 Ultra, and after covering boring silver, black, white and even copper laptops for years, I’m just grateful for something that’s not just different but that’s beautiful. Samsung’s notebooks have been some of the more colorful around, like its fiery red Chromebook or the cobalt blue Book Flex. I never knew I could lust after a burgundy laptop, but here I am coveting a PC for its color.

I also really liked how light and thin the Book 2 Pro is (13-inch version weighs 0.87kg or 1.91 pounds), and in spite of its daintiness it felt premium and sturdy. Samsung’s laptops might not look as elegant as HP’s Spectre series, but they certainly give Dell’s XPS or Microsoft’s Surface products some competition.

But back to features that will make more of a difference in your daily workflow. The 15-inch Book 2 Pro 360 has a comfortable, spacious keyboard and gigantic touchpad that was responsive during my time with it. I hardly ever use numpads anymore, but the larger models come with them, which could be handy for those working with numbers a lot. I also enjoyed typing on the 13-inch versions of the Galaxy Book 2 — there’s enough travel and satisfying feedback.

My main gripe with the Galaxy Book 2 is the $50 price hike. The Book 2 Pro 360 starts at $1,250, up from last year’s $1,200, and I’m not sure a brighter screen and sharper webcam alone are worth the difference. I’d also need to test these devices out for longer to gauge their real-world performance and determine things like battery life and thermal efficiency. The good news is there’s still time — pre-orders start on March 18th, with availability beginning on April 1st. The Galaxy Book 2 360 starts at $900, and is only available from April 1st onwards, while the Book 2 Pro goes for $1,050.