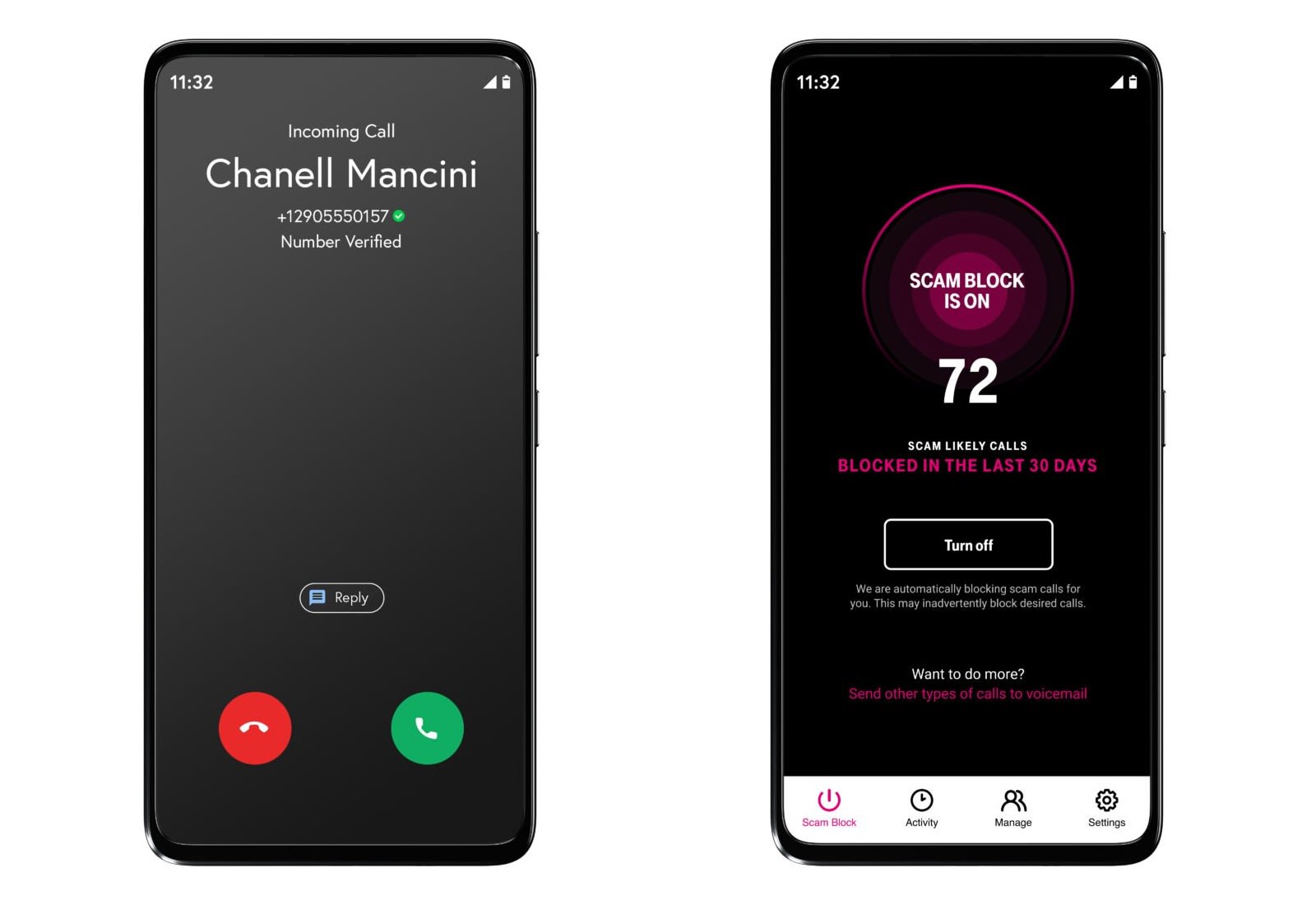 T-Mobile completed its purchase of Sprint earlier this year, and with those regulatory hurdles out of the way the company is once again announcing some new features for its expanded customer base. The focus is on spam and robocalls, something that T-Mobile says is the number one complaint right now to the FCC. Starting today, T-Mobile is offering its customers a variety of free services to make identifying and avoiding spam calls easier, a program called Scam Shield.

Probably the most notable feature is a Scam ID feature that’ll label suspicious calls as “scam likely” when the call comes in — from there, customers can also choose to entirely block calls that T-Mobile identifies as likely spam so they never ring through. Additionally, T-Mobile’s caller ID feature is now free to all customers, as well. This uses the industry-standard STIR/SHAKEN technology that T-Mobile implemented earlier this year. As you’d expect, the caller ID feature shows the name of the person or business that was calling if they have it, and it’ll also show a “call verified” label when it can confirm a number hasn’t been spoofed.

These features are managed in a Spam Shield app for iPhone and Android devices, which will be available on July 24th. It’s an updated version of the T-Moblie Name ID app that provided caller ID features and serves as a one-stop location to manage your number’s security. You can turn the spam-blocking tool on and off there and see an ongoing list of all calls that T-Mobile has identified as spam, as well as set up the caller ID features.

T-Mobile is also touting a revamped version of its Digits “virtual number” feature that it rolled out a few years ago. Now called Proxy, all customers can set up a second phone number that they can use to give out instead of their real phone number. It’s an effort to keep your “real” number private, rather than have it floating out there in the hands of every business you’ve ordered something from online, for example. You can set it up so that calls and messages come through like normal, or have them sent straight to voicemail so you can check them later. Each T-Mobile account gets one Proxy number that all family members can access; if you want more than one you’ll have to pay extra for it. If you feel like your main number is already too inundated with spam calls, T-Mobile will let you change it for free.

In a livestream presentation, T-Mobile repeatedly called out the fact that it was implementing these features at the network level and is continuously learning more about how to identify robocalls before they reached customers, but it’s obviously still a major issue. T-Mobile CEO Mike Sievert said that while a lot of these technologies have been available already, they’re trying to cut costs to customers and involve them more directly in the process — the more spam calls that are reported to the carrier, the better they’ll be at identifying them going forward.

Finally, in keeping with the security theme of the announcement, T-Mobile partnered with McAfee to give customers 12 months of identity protection with “Be ID Aware.” This will alert customers when their private info shows up on the dark web or is revealed in a data breach so they can make sure to look for fraudulent transactions or any attempts at identity theft. T-Mobile customers can sign up for this service now through. August 31st.

Nearly all of these new feature are available to all T-Mobile customers, including Metro by T-Mobile users as well as existing Sprint customers. But since Sprint and T-Mobile’s networks haven’t merged yet, they won’t have access to the Spam Shield app and its full set of protections yet. Instead, they can use Sprint’s Call Screener app and service, which is now free instead of $2.99 per month. That will unlock free caller ID and spam blocking on Sprint’s network. Meanwhile, T-Mobile customers can turn on spam call blocking by dialing #662#; next week, they’ll be able to monitor these features when the Spam Shield app arrives.

In this article: t-mobile, verizon, AT&T, robocalls, spam, spam calls, spam shield, caller ID, stir/shaken, news, gear
All products recommended by Engadget are selected by our editorial team, independent of our parent company. Some of our stories include affiliate links. If you buy something through one of these links, we may earn an affiliate commission.