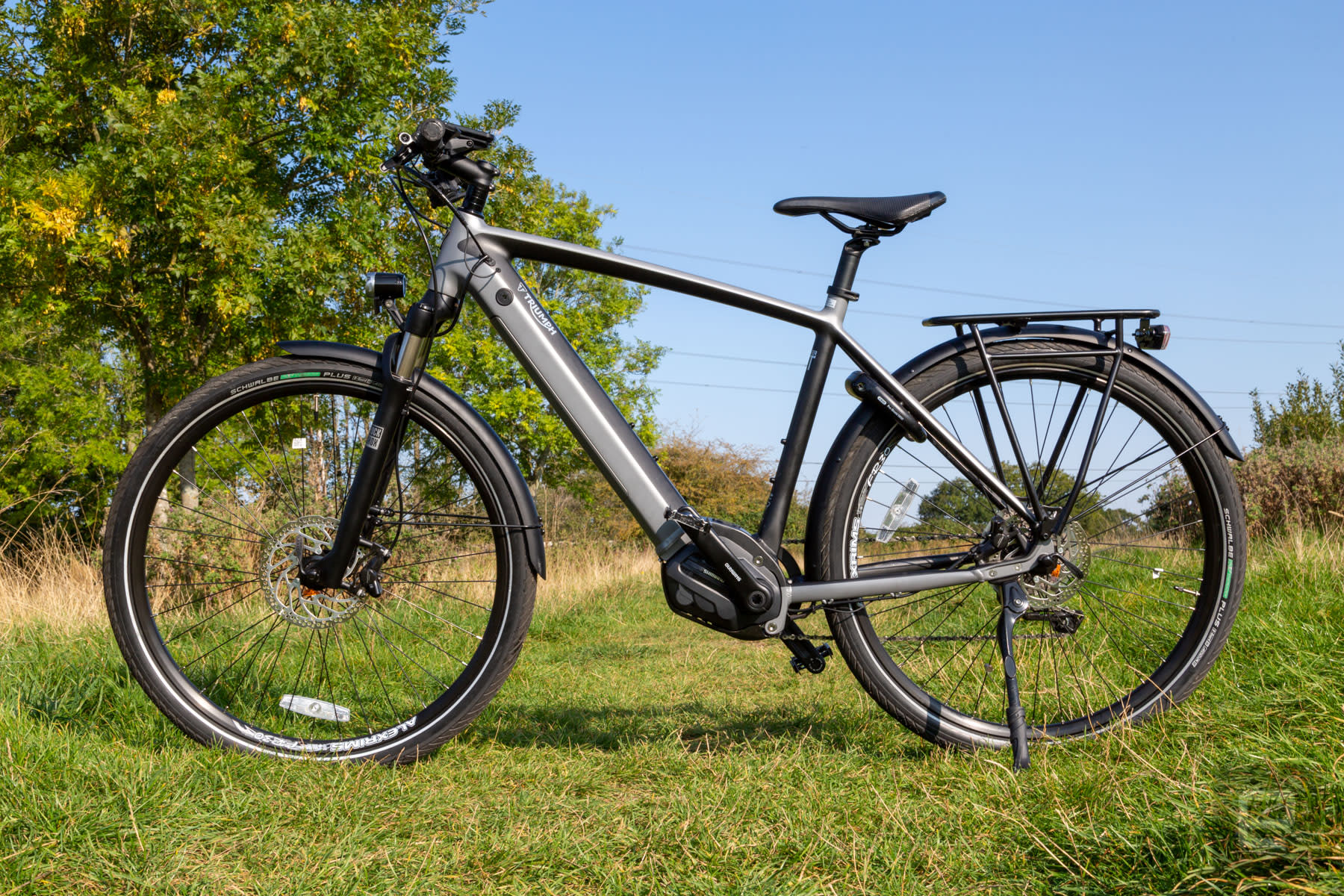 A bike for those who love the Triumph name.

For many, the Triumph name is synonymous with classic British motorcycles. Circular headlamps, long leather seats; the kind that Steve McQueen rode during the climactic finale of The Great Escape. But Triumph actually started out in 1884 as a pedal-powered bicycle manufacturer. The company’s motorcycles came a little later and the bike business was ultimately sold off and shuffled between a few different owners including Raleigh. It’s felt like an eternity since I’ve seen a new bicycle with the Triumph name. That’s all changed with the Trekker GT, an e-bike designed by the Triumph Motorcycles team in the UK.

Partly designed, anyway. Triumph has wisely chosen to lean on Shimano, a trusted manufacturer of cycling components, for most of the important bits. The Trekker GT uses a 250W Shimano DU-E6100 motor, for instance, to assist the rider’s pedalling. It’s not the most powerful system — Shimano’s E8000 and newly-launched EP8 motors deliver more torque — but the 60Nm is double what Cowboy’s latest e-bike can manage and equal to VanMoof’s S3 with the boost button held down.

The mid-drive system, which is positioned between the pedals, draws power from an integrated but removable 504Wh Shimano battery that sits inside the frame’s down tube. The capacity is competitive with the broader e-bike industry. VanMoof’s S3 also ships with a 504Wh battery, and Bosch — which supplies e-bike components to brands like Cube and Cannondale — offers integrated PowerTubes in 400, 500 and 600Wh options.

The bike has three main riding modes that you can switch between using thumb-sized buttons located near the left handlebar grip. There’s also a Walk mode, triggered by holding the bottom button down for a few seconds, that makes it easier to move the bike around once you’ve dismounted. That can be handy if you’re carrying lots of bags on the rear rack or simply pushing the machine for a prolonged period through a crowd or up a steep hill.

You can check what mode you’re in using a small Shimano-branded computer (noticing a trend yet?) that slides into a cradle on the handlebars. It has three physical buttons — one for turning the bike on, another for toggling the lights, and a final shortcut for changing the information on the monochrome display. The 2.7-inch screen doesn’t grab your attention like VanMoof’s Matrix Display, or Gocycle’s Formula One-inspired Cockpit. But it’s practical and loaded with useful data, such as your current speed, remaining charge, and a bar that dances back and forth to show how hard the motor is working.

Triumph's first e-bike is a nightmare to lift up and carry.

The Trekker GT weighs 24KG, which is markedly more than the Cowboy, VanMoof’s S3, Gogoro’s GXi, and most other e-bikes I've tested. Heavier options exist, such as Riese & Muller’s Charger3, Cube’s Kathmandu Hybrid One 500, and the monstrous Mate X. Still, Triumph's first e-bike is a nightmare to lift up and carry. You’ll need to be built like Dwayne ‘The Rock’ Johnson if you want to haul this up a flight of stairs or onto a car roof rack.

Thankfully, Triumph’s first e-bike is consistently pleasant to ride. I had the Trekker GT for a weekend and completed a few sun-soaked rides in the south of England. The Shimano motor was dead silent and provided adequate assistance on flat stretches of road and steep, otherwise sweat-inducing hills. The acceleration wasn’t particularly fierce — even in the highest riding mode — but it was powerful enough that I never became aware of the bike’s colossal weight.

The bike’s assistance would fade away whenever I got close to 25KMH (15.5MPH). That’s the limit set by the UK government and is, therefore, typical for commuter-style e-bikes sold in the region. The cap is slightly higher in the US, so it’s possible that Triumph will increase the maximum speed in that specific market. Regardless, you can often reach higher speeds with some extra pedal power. The Trekker GT has 10 gears that you can switch between using Shimano trigger shifters on the right handlebar. While it’s not the most convenient system — many rivals have a single gear, or automatic shifting — it does give you more control. On the highest gear, for instance, I often found that I could push the bike up to 29KMH (18MPH).

The Trekker GT’s weight means that you’ll go even faster downhill. And unlike Gogoro’s Eeyo 1S, the motor doesn’t have any sort of “protection mode” that penalizes you for going faster than 32KMH. That means you can take full advantage of gravity and trust that the motor will provide assistance again as soon as you dip below 25KMH. If you live in a hilly area, it’s a great way to eke some extra miles out of the battery.

Triumph’s first e-bike is comfortable, too. The Selle Royal Vivo saddle provides plenty of support and the Rockshox front suspension is excellent at soaking up the occasional pothole and speed bump. The Trekker GT can handle some light off-roading, but I wouldn’t call it a mountain bike replacement. As the model name implies, it’s built more for short and medium-distance touring, provided you have some kind of charging. Triumph doesn’t sell additional batteries — and you wouldn’t want to carry another one on your back, because they’re heavy — so you’ll need to use the included charger, which plugs into the mains.

I didn’t have the bike long enough to perform a proper battery test. On a full charge, though, the Shimano computer said I should get roughly 56 miles on High, 79 miles on Normal and 113 miles on Eco. If that’s accurate, the bike will be fine for everyday commuting and the occasional weekend camping trip, provided you don’t have ambitions to cycle around the outside of Scotland. Adventurers will also appreciate the rear rack that can take panniers and, if you’re a dab hand with straps and bungee cords, an assortment of bags that weigh up to 18KG (40 pounds).

It’s for people who smile whenever they see the Triumph badge.

Some people have praised the bike’s looks, but I think they’re average at best. The downtube is incredibly thick — at times it feels like you have a motorbike between your legs —  and the handlebars are surrounded by a web of wires. I had to stifle a chuckle when I saw that Triumph had used a cable wrap to keep a few of them bound together. The lights are plenty bright but I wish the one on the front was properly integrated into the frame. Similarly, the Abus Pro Shield lock, which sits between the seatstay and seat tube, doesn’t feel very cutting edge when compared with VanMoof’s rear-wheel stealth lock.

On paper, the Trekker GT is nothing special. The overall look was conceived by Triumph but most of the parts have been sourced from Shimano. That dependency means the bike should be reliable and relatively easy to service, however. Brands like VanMoof and Cowboy are alluring, but you’re relying on their respective owners to supply replacement parts and not go out of business. If I had to place a bet, I would say Triumph and Shimano are more likely to be around in five year’s time. And even if they were to go under, there’s a good chance that your nearest bike shop will have some idea how to source parts or fix any problems that arise.

The Trekker GT will set you back $3,750. While expensive, it’s nothing eyebrow-raising in the e-bike world. Plenty of rival manufacturers including Moustache, Gazelle and Riese & Müller offer pedal-assist models in this sort of price range. So who should buy Triumph’s electrified debut? It’s not meant for the tech obsessed, nor the lycra-clad road warriors that crave carbon fiber. Instead, it’s for people who smile whenever they see the Triumph badge. Maybe they own one of the company’s classic motorcycles, or have always dreamt of buying one. Or, like me, it’s someone who vaguely remembers when Triumph made pedal-powered bicycles, and will be reminded of that legacy whenever they start riding this overdue reboot.

/28
All products recommended by Engadget are selected by our editorial team, independent of our parent company. Some of our stories include affiliate links. If you buy something through one of these links, we may earn an affiliate commission.