Carving up London on the monster Mate X electric bike

Most electric-bike companies are pursuing designs nearly indistinguishable from their purely pedal-powered brethren. They're hiding batteries in slightly thicker frames or attaching them where a rider would normally store a water bottle. While the execution differs, the goal is the same: to make the owner blend in with other cyclists. Mate is a little different, though. The Danish startup is developing e-bikes that are meant to stand out and make people stare. Its latest, the Mate X, is a monster ride with chunky off-road tires and a thick slab of metal that doubles as the top and down tube.

The two-wheeled goliath will ship in three different versions: 250, 250+ and 750. The first two come with a 250W motor and a top speed of 25 KMH/15.5 MPH, the maximum allowed under EU law. You can pedal harder, of course, but the system will only assist you up to this speed. The top-end model, meanwhile, has a 750W motor that can push you up to 32 KMH/20 MPH. It's legal to ride in the US, Mate assures me, but not in the EU without a relevant license. If you have some private land, it's also possible to remove the software-controlled limit and reach higher speeds.

I tried a prototype Mate X on a rain-soaked afternoon in London. The bike has five power levels which you control with clicky buttons on the left-hand side of the handlebars. You can also switch between seven traditional bicycle gears using a shifter next to the right-hand grip. Keeping tabs on both your gear and power level can be a little tricky, but ultimately the system offers more control. At the bottom of a hill, for instance, you might want a lower gear so you can easily move the cranks and, by extension, trigger the pedal-assisted motor. On the flat, though, higher gears will help you stay at top speed with the smallest amount of electric aid.

Riding the 750 Mate X is a rush, especially at the highest power level. I tore around London's Olympic Park for the best part of an hour, tackling tarmac, grass and the occasional dirt track with ease. The prototype I was riding had knobbly big-daddy tires designed for muddy, technical terrain like this. If you want to use the bike on pavements or sandy beaches, though, there's an optional set of sandstorm wheels you can choose instead. I rarely lost control on the big-daddy set, though, save for a particularly wet patch where I accidentally hit the rear brakes too hard.

The Mate X's power level, speed and remaining charge are shown on a large monochrome screen attached to the handlebars. While not tightly integrated like a VanMoof bike, it does display all the necessary information in a large and easily readable format. That's useful when you're charging over bumps and loose stones, as it only takes a glance to see how the bike is performing and whether the battery is about to run dry. 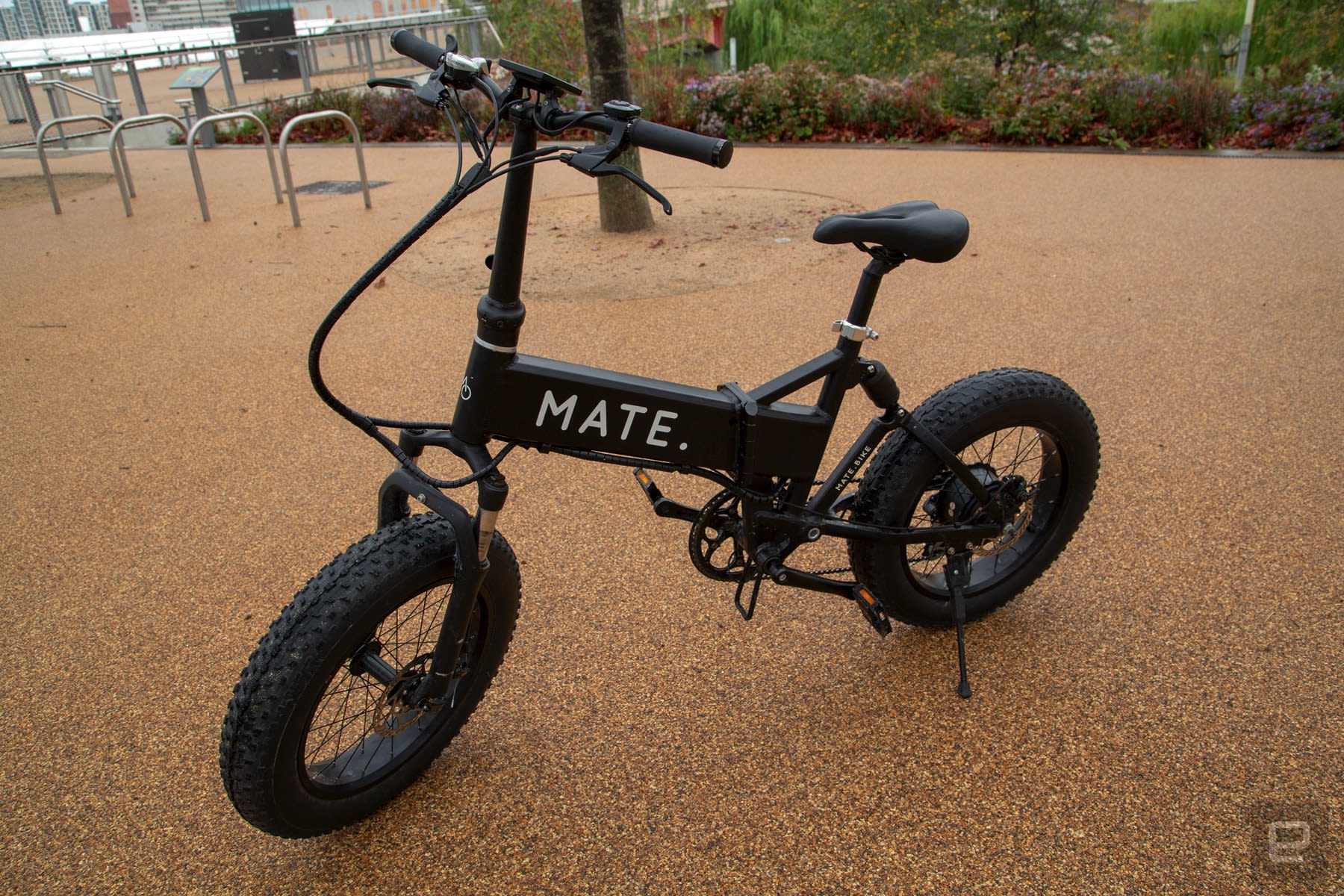 The bicycle is fast but surprisingly comfortable to ride. The front and rear suspension work in tandem with the mammoth tires to soak up small bumps and potholes. Compared to most commuter bikes and other rideables such as the Onewheel, it's pillowy smooth. If, however, you're riding over large rocks or hopping up a high curb, you'll still feel a small jolt in your arms and rear-end, just like a traditional mountain bike.

The Mate X is a huge piece of gear, but it can also be folded like a Brompton or Hummingbird. The vertical tube that holds the handlebars can be folded down toward the front wheel. You then drop the saddle, fold the pedals upright and snap open the large clasp in the center of the frame, which lets you bend the entire bike back on itself. Mate says the process should take a few seconds -- while fiddly, I believe that time is possible with practice.

In its folded form, the bike measures 103cm high, 78cm long and 65cm wide. It's small enough for most car trunks and will, of course, draw less attention on a train than a regular bike. The folded bike is still quite large, however, and weighs 63 pounds, so don't expect to carry it far by hand. 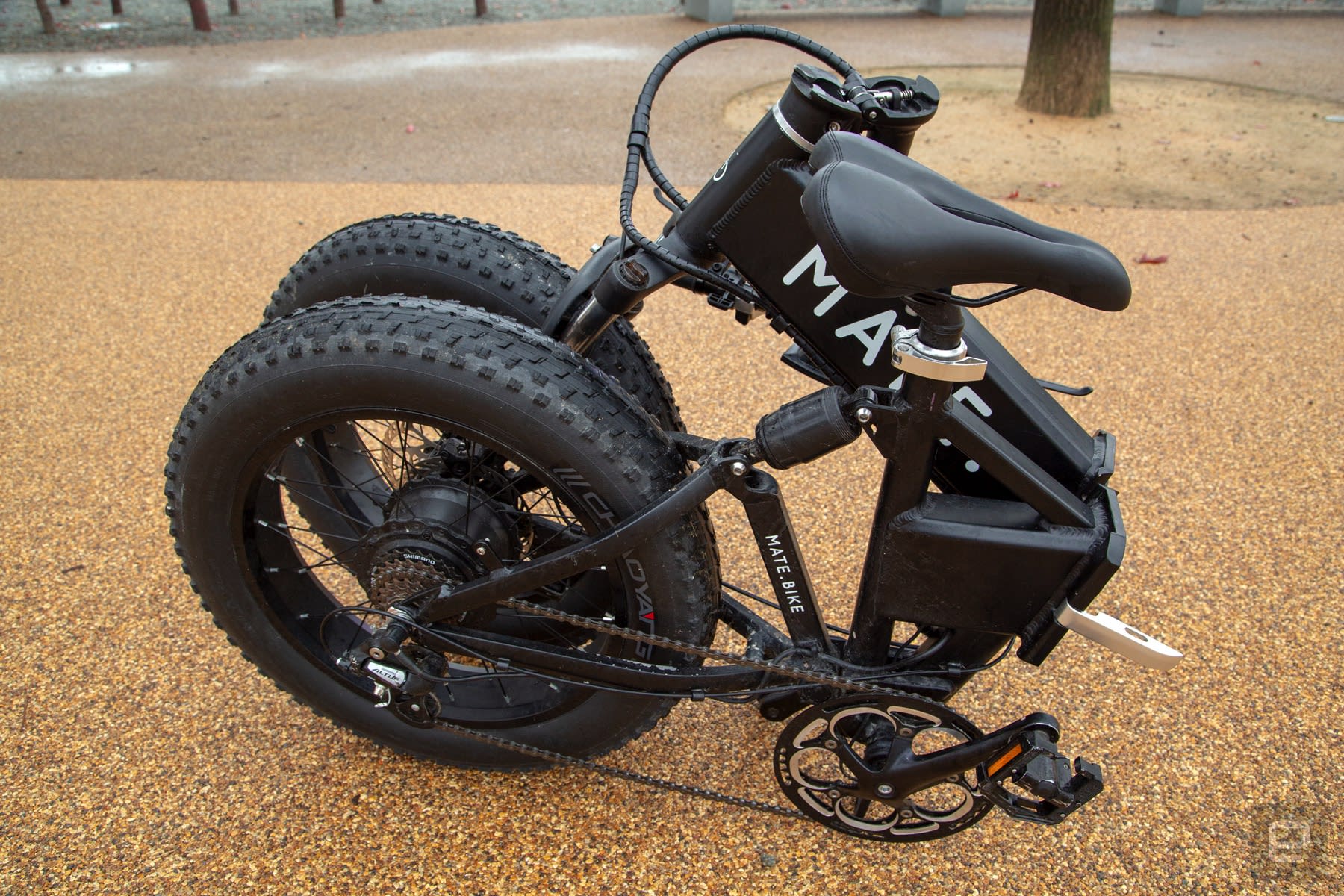 The 696 Wh battery in the entry-level Mate X can last up to 35 miles -- depending on your weight, the terrain you're tackling and the power level you typically ride at -- and takes roughly five hours to charge. The 250+ and 750, meanwhile, come with an 840 Wh battery that boasts a 55-mile range and four-hour recharge time with the included Speed Charger. You can also remove the battery when you release the main clasp on the bike frame. That means it can be hot-swapped and, theoretically, charged separately from the bike. If you live on the ninth floor of an apartment block or don't have a mains outlet in your garage, this is a big deal.

As I mentioned earlier, the bicycle I rode was a prototype. The welding on the frame was a little messy and the motor cut out unexpectedly a few times, causing the bike to judder back and forth while I was coasting. Co-founder Julie Kronstrøm stressed that the final version will be more polished and offer a host of upgraded parts, including the rear suspension and gear shifters. Mate will also sell a bunch of optional extras including aluminum fenders, a thumb throttle, better disc brakes, a color display, higher capacity batteries and a rear rack with built-in brake lights.

Mate funded its original electric bikes through Indiegogo in 2016. Like almost every crowdfunding campaign, there were unforeseen problems and shipments were delayed. Backers did receive their bikes, though, and Kronstrøm says the company has learned a lot from the experience.

Even so, the Mate X is another crowdfunding project and should be treated with a healthy dose of skepticism. The Danish startup has proven it can ship hardware and plans to deliver the first Mate X bikes before the end of the year, but any pledge is still a financial risk. 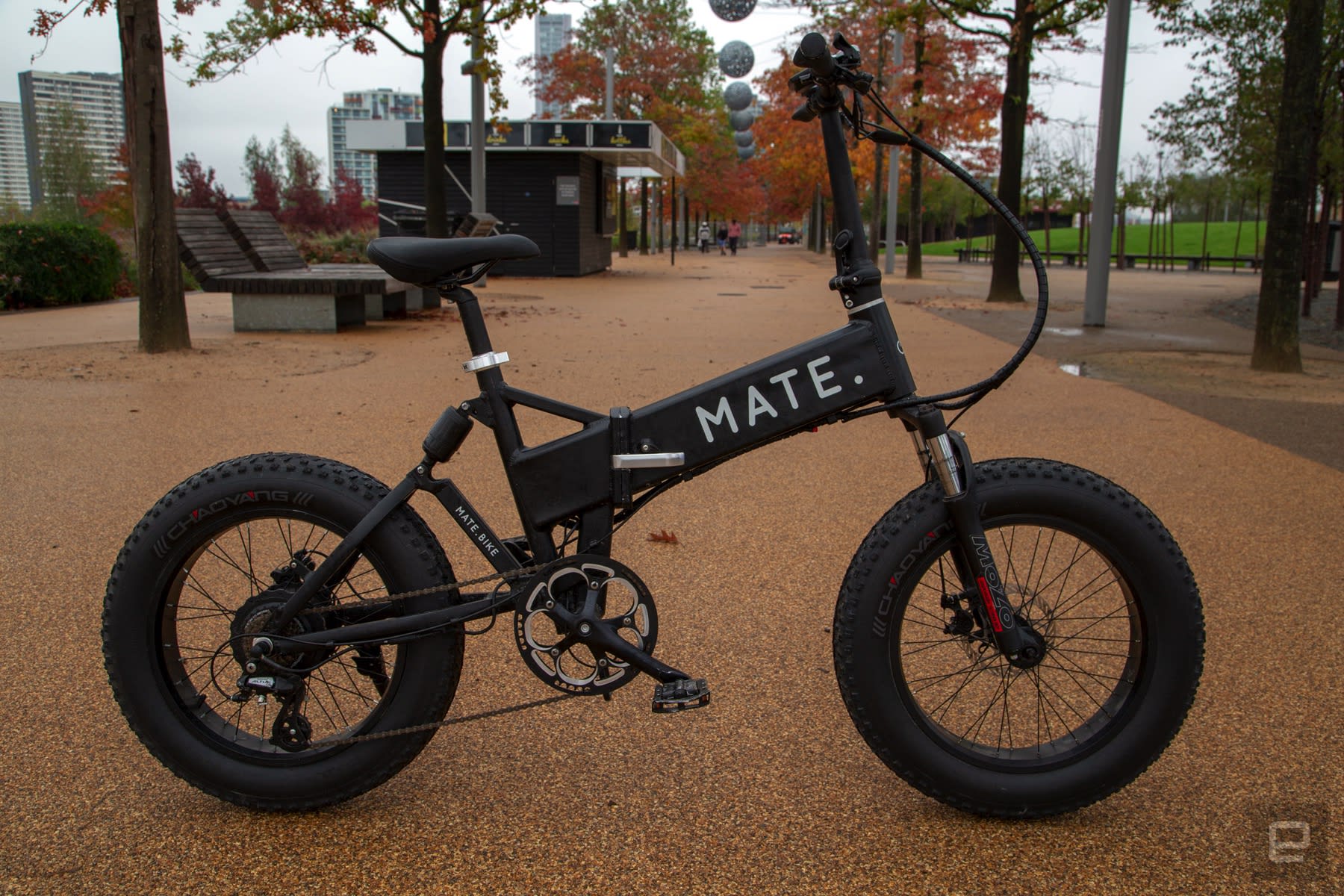 I had a lot of fun with the Mate X in London. It's more of an adventurer's plaything than a serious mountain climber, though. The riding style reminds me of a Raleigh Chopper and other beach cruisers, but on steroids. You're pedaling, so there's some exercise involved, but it often feels more like a scrambler than a conventional mountain bike. It's an undeniable blast for thrill-seekers and urbanites who want a head-turning mode of transportation. But it's not for business folk who want a discrete commuter bike, or cross-country cyclists who log 200 miles every weekend.