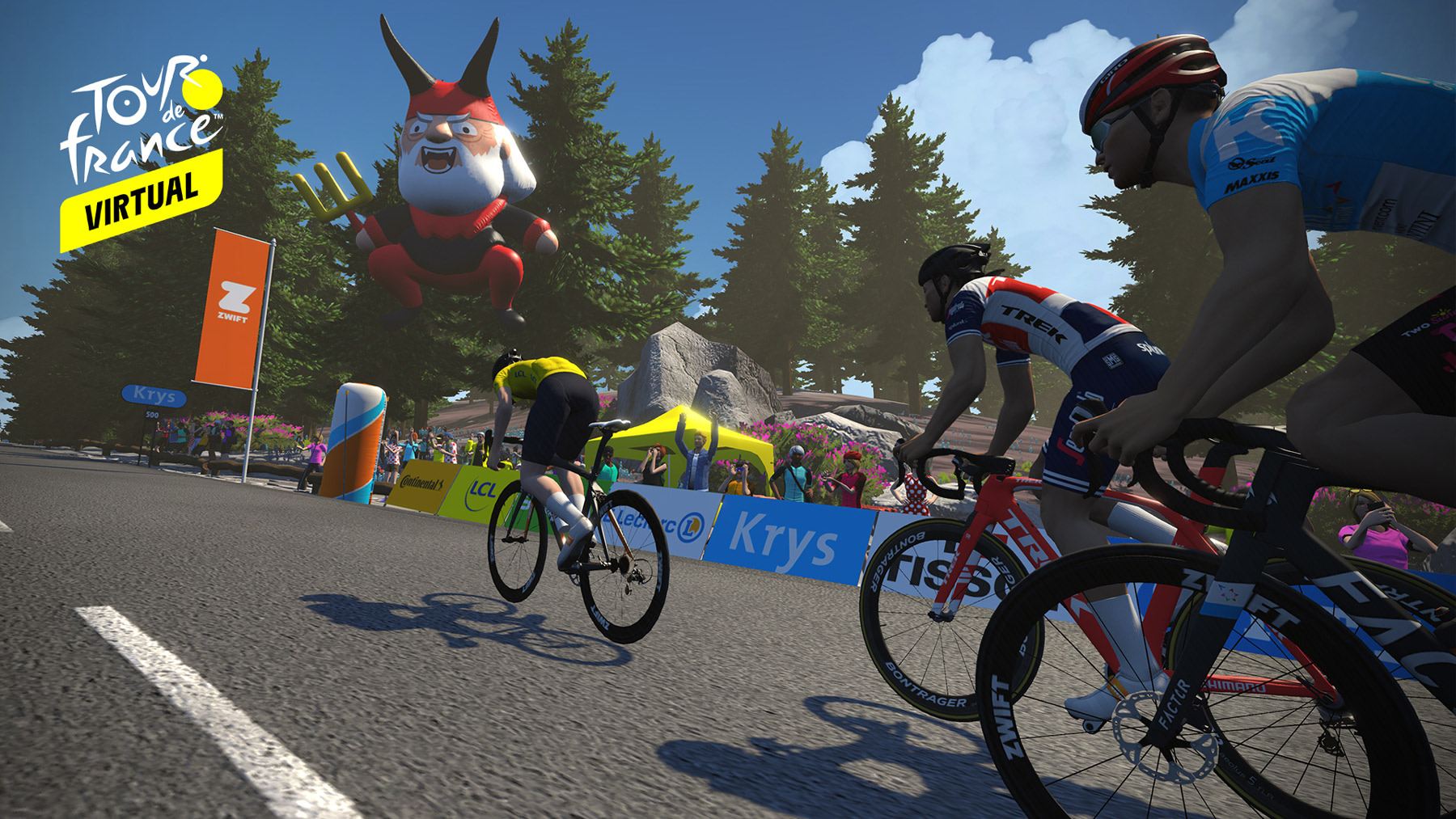 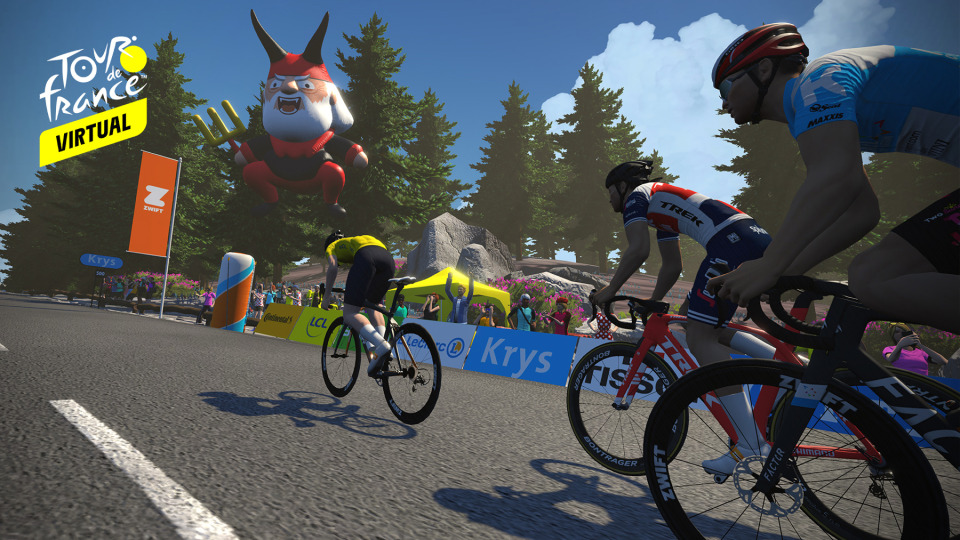 The Tour de France, the toughest and most prestigious competition in professional road cycling, is usually held in July. The coronavirus pandemic, however, has forced the time-honoured sport to delay major events such as the Giro d'Italia and cancel smaller ones including the Paris-Roubaix, Tour of Yorkshire and Volta a Catalunya. The Tour de France is currently scheduled to start on August 29th which, while accepted and supported by most cyclists, leaves an obvious hole in the racing calendar.

Enter Zwift. Today, the company is announcing that it will host a virtual Tour de France over three weekends starting on July 4th. It won’t be an exact replica — the real Tour de France is gruelling, and riders will want to peak during the actual race one month later — but will hopefully recreate some of the event’s competitive riding and festival-like atmosphere.

It feels like Zwift has been building up to this moment. The startup offers an app with virtual worlds that runners, cyclists and triathletes can traverse using their personal treadmill or bike trainer. A virtual avatar will match their performance at home — speeding up when they jog or pedal faster, and dropping off when their legs start to tire — and take other factors like drafting into account. Some treadmills and trainers will also adjust their angle slightly to match the slope that you’re trying to climb.

Zwift has a free run and riding mode, as well as structured workouts and competitive races. Professional cyclists have embraced the latter during COVID-19, and Zwift has respond by putting on additional events that can be watched on its YouTube channel. These broadcasts don’t have the same production values as the Overwatch League or League of Legends European Championship (LEC), but it’s something that cycling fans have been able to latch onto during a tumultuous period for the industry.

Zwift events are different from traditional races — turning is automated, for instance, and it’s harder to sense when another rider might attack. Some Zwift events have Mario Kart-style power-ups, too, that let the rider turn invisible, become lighter, or increase the effects of drafting temporarily. Zwift isn’t concerned about absolute realism and most cyclists have accepted that the platform requires some fresh thinking and strategies.

The competition will be held over six stages that each take roughly an hour to complete.

The virtual Tour de France should be Zwift’s biggest event yet. The competition will be held over six stages that each take roughly an hour to complete. Men and women will race separately, just like real life, but compete over identical courses. The first two stages will take place in Watopia — a fictional world that Zwift developed for its broader running and cycling community — with “several visual additions” inspired by Nice, the coastal town that will host the tour’s ‘Grand Départ’ in real life.

The race will then shift to a France map built specifically for the virtual tour. The final stage, meanwhile, will mimic real life with a Paris circuit that loops around the Champs-Élysées and Arc de Triomphe.

Zwift and ASO, the real-life Tour de France organizer, want the event to have a celebratory atmosphere. That’s not to say the races won’t be competitive, though. Twenty-three men’s teams have signed up for the event, including the tour’s reigning champion Egan Bernal and former winners Geraint Thomas and Chris Froome. The women’s competition will be equally fierce, with 17 professional teams that include superstar rider Marianne Vos and Olympic gold medallist Anna van der Breggen.

Like the real-life tour, riders will be able to compete for the green (best sprinter), polka dot (best climber), white (best rookie), and yellow (overall winner) jerseys. Every category will be decided on points — differing from the real-life tour, which uses time to decide the yellow jersey — and all of the scores will be pooled together to decide the best overall team. Zwift chose this system so squads can rotate riders between the various stages.

Zwift says the competition will be shown on its website, the Global Cycling Network (GCN) app, and via TV broadcasters in over 130 countries. These include Eurosport (Europe), EurosportAsia (Asia), NBCSN (US), FloBikes (Canada), SBS (Australia), Zhibo.tv (China) and J Sports (Japan). These partnerships are a massive opportunity for Zwift to prove that its platform should be taken seriously. Virtual racing can’t replace real-world cycling, but there’s a chance it could become a complimentary esport that helps teams diversify their revenue and weather difficult financial downturns.

"Today, esports for us is the athletes competing from the comfort of their homes," Eric Min, CEO of Zwift explained on the CyclingTips Podcast last month. "Because of the situation that we're in. The future of it is, let's go into an arena with 30,000 or 40,000 people, where we can sell tickets, concessions and broadcast rights. That is the end state."

It’s not all about the pros, though. The virtual tour will have a side event for amateurs called the Virtual l’Etape du Tour de France. Every weekend, Zwift will take a single stage designed for the elite riders (the first weekend will offer stage two of the virtual tour, for instance) and run 16 “mass participation” sessions throughout Saturday and Sunday. In theory, these will give casual and club-level cyclists a small taste of the Tour de France and a time or score they can directly compare with the professionals.

The virtual Tour will be part of Tour de France United, a series of events and initiatives that will raise money for five charity partners: Emmaüs, Secours Populaire, Jeugdfonds Sport and Cultuur, BiJeWa and Qhubeka.

Will Zwift racing ever supplant the real-life Tour? Probably not. But if the worst happens and the physical Tour de France is cancelled this year, at least fans will have some kind of replacement to watch and remember.

In this article: zwift, tour de france, sport, france, cycling, esport, news, tomorrow
All products recommended by Engadget are selected by our editorial team, independent of our parent company. Some of our stories include affiliate links. If you buy something through one of these links, we may earn an affiliate commission.