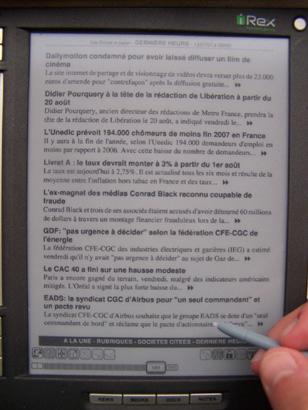 It's not like this is the first e-newspaper we've seen, but France's Les Echos is now offering up an electronic flavor of its product to those with an iRex iLiad or STAReBook. Oh, and the Amazon Kindle, too as you'll recall from that little inadvertently mentioned tidbit from their press release. Reportedly, the e-paper edition "will include whole articles just like in the printed" version, but unlike the traditional medium, those with e-readers will receive constant updates of the day's hottest stories and will actually be able to read the 6:00AM print edition at 9:00PM the night prior. Notably, the newfangled Les Echos edition will cost a stiff €365 ($506) per year if you provide your own reader, and for those of us far, far away from the Eiffel Tower, check out a video demonstration after the jump.

In this article: e-newspaper, e-paper, enewspaper, epaper, france, french, iRex iLiad, IrexIliad, les echos, LesEchos, newspaper, starebook
All products recommended by Engadget are selected by our editorial team, independent of our parent company. Some of our stories include affiliate links. If you buy something through one of these links, we may earn an affiliate commission.
Share
Tweet
Share