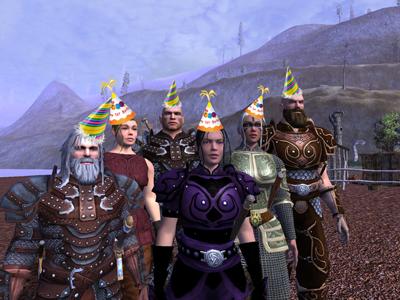 We were just recently talking about how much Vanguard: Saga of Heroes has improved over the years. Make that, as of this week, two years exactly as the MMO celebrates its anniversary with an in-game event. The actual birthday was on the 30th of January, but we're not going to quibble. While you missed the first night of festivities last night, tomorrow night there's a whole 'nother round for weekend warriors. They're giving out cake and fireworks for free, along with the chance to meet some of the well-known CMs and developers in-game.

This week also saw the release of a brand-new update to the game. Unlike the massive Game Updates that have given Vanguard players so much in the way of new content, this is just a bug-fixing backend sort of thing. Highlights include a handful of new quests, some fixes to the appearace slot and general appearance systems, a few class tweaks, and some general housekeeping. Our favorite patch note: "The waters around the towers of BOD are now shark infested. Beware those who like to skinny dipping."
In this article: anniversary, breaking, holiday, in-game-event, soe, sony-online-entertainment, vanguard
All products recommended by Engadget are selected by our editorial team, independent of our parent company. Some of our stories include affiliate links. If you buy something through one of these links, we may earn an affiliate commission.
Share
Tweet
Share