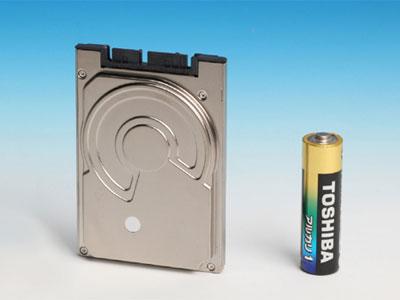 That's the world's largest capacity 1.8-inch hard disk drive right there. A claim met by a list of specs going a little something like this: 3.0Gbps SATA interface, 320GB capacity, 5,400 RPM, 16MB buffer, and 19dB of emitted noise during seeks -- a 4dB cut from Toshiba's previous generation of 5,400 RPM 1.8-inchers. Of course, these 1.8-inch mechanical HDDs are the form factor most commonly found in those netbook-shoving CULV thin-and-light ultraportables now coming onto the market. Look for it in December when the MK3233GSG hits mass production.
In this article: 1.8 inch, 1.8-inch, 1.8Inch, 320gb, culv, disk, drive, hard disk, hard disk drive, HardDisk, HardDiskDrive, hdd, highest capacity, HighestCapacity, largest, MK3233GSG, thin and light, thin-and-light, ThinAndLight, toshiba, worlds largest, WorldsLargest
All products recommended by Engadget are selected by our editorial team, independent of our parent company. Some of our stories include affiliate links. If you buy something through one of these links, we may earn an affiliate commission.
Share
Tweet
Share