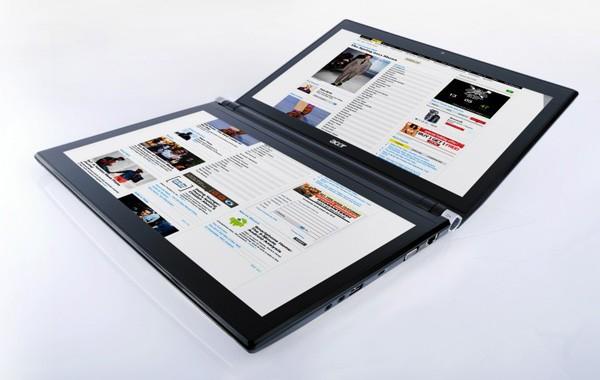 Physical keyboards are old news, right? They will be come January 28, which is when Acer intends to make its dual-screen Iconia laptop available for public consumption. That's the date we've received from the company's official Spanish mouthpiece, accompanied by a lofty €1,499 ($1,987). Literal currency translations are as usual inadvisable, but that's a hefty fee, however you want to think about it. Then again, the Iconia does come with two 14-inch multitouch LCDs, which last we checked weren't the cheapest parts in the land, and also furnishes you with some decent grunt under the hood courtesy of a Core i5 CPU, up to 4GB of RAM, up to 750GB of storage, an optional 3G module, and -- lest we forget -- a USB 3.0 port. We're sure it'll end up as somebody's perfect bowl of porridge.
In this article: acer, acer iconia, AcerIconia, confirmed, dual-screen, iconia, laptop, multitouch, official, price, priced, pricing, tablet, touch, touchscreen, windows 7, Windows7
All products recommended by Engadget are selected by our editorial team, independent of our parent company. Some of our stories include affiliate links. If you buy something through one of these links, we may earn an affiliate commission.
Share
Tweet
Share