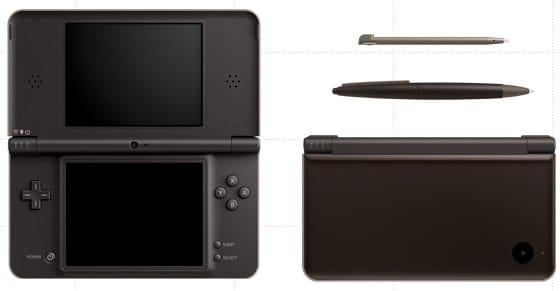 Since Nintendo first asserted sole domination over the handheld gaming market with the release of the paperback-sized Game Boy in 1989, the company has striven time and again to make its pocket systems smaller, meeting fantastic financial success along the way. Nintendo did it with the Game Boy Pocket, the Advance SP, the Micro, the DS Lite and again ever so slightly with the DSi -- the last even at the expense of backwards compatibility and battery life. Now, for the first time in the company's history, it's made an existing platform bigger, with questionable reasons as to why. Does the Nintendo DSi XL squash its predecessors flat? Or is Nintendo compensating for something? Find out inside.

How would you rate the DSi XL?
We want to hear what you think. Post a quick review now to join the conversation!
Write a review

There's a reason Nintendo calls it the DSi XL, and it doesn't have anything to do with your sweater size. At 6.3-inches long and 3.6-inches wide, it's both taller and wider (closed and held upright) than that 1989 Game Boy, and at two-thirds of a pound it's heftier than either the original DS or PSP. Less than an inch thin, the handheld is still slender enough to slip into your pocket -- assuming you wear cargo pants -- but the thought is daunting enough we don't expect most to even try.

Of course, Nintendo isn't letting that heft go to waste -- every ounce contributes to the DSi XL's phenomenal design. Though practically every port, light and button from the original DSi is duplicated here in its entirety (down to the power jack -- you can use the DSi charger), Nintendo has crammed in a pair of crisp, clear 4.2-inch LCD screens with nearly double the original real estate, and further rounded the corner grips so they no longer dig into our palms during extended play. It's the comfiest DS we've held, and the most durable -- the unit barely flexes even when twisted, and closed we felt completely comfortable sitting on the thing. (Stress testing, anyone?) The only missteps are the two oh-so-dull colors available (which, knowing Nintendo, will soon see remedy), and the glossy plastic fingerprint magnet Nintendo inexplicably affixed to the top of the unit -- which developed hundreds of smudges and miniature scratches well before review time. Please don't fix what ain't broke, Nintendo; you got it right with the matte finish DSi.

Sadly, where it really counts -- actually playing games -- the XL has scarcely seen improvement. The software's exactly the same, warts and all; we still had to wade through menus to set up WPA2 security, even as cartridge-based games forced us back to easily-cracked WEP for their WiFi. The larger screens are a nice touch and do, as Nintendo claims, support wider viewing angles and make text easier on the eyes, but since they are the exact same 256 x 192 resolution, what Nintendo's done is effectively up the size of each pixel. In games that already looked pixelated (especially 3D titles like Mario Kart) the additional aliasing drove us to distraction, and even games with little motion were noticeably made up of tiny squares on occasion. Buttons were similarly a mixed bag; while we liked the additional give on the shoulder triggers, the XL's clicky D-pad and face buttons are even slightly tighter than that of a new DSi, and gave us stiff thumbs after only a single 3-lap race in Mario Kart. The DSi XL is still not a system you'll be playing in a sunny park, also -- a hair brighter than its predecessors, perhaps, but unplayable is unplayable, and as you'll see in our gallery, the XL's a good bit dimmer than an iPhone. Indoors, though, expect to play quite a while; with a 3.7v, 1050mAh lithium-ion battery (compared to the 840mAh in the DSi) we got a solid 5.5 hours of battery on max brightness -- ahead of Nintendo's estimate of 5 -- which means you can reliably eke out double that duration with the backlight turned up halfway.

The one undeniable improvement in the DSi XL experience is audio quality. We're not sure what Nintendo's done to the unit's speakers other than provide larger grills, but where previous DS units provided only a sizable sound bubble, the XL's two speakers can fill an entire living room with clean audio on max volume. Believe it or not, it's the first Nintendo portable where we'd recommend against using headphones.

The Nintendo DSi XL is a solid handheld; without a doubt, one of the most solid Nintendo's ever offered. But at $190, we're not sure exactly who the system is for. If you've already got a DSi (or even a Lite) it's not a worthwhile upgrade; for every point in its favor, there's a trade-off. We'd recommend it as a fantastic first DS, if the stereoscopic 3DS wasn't just around the corner. For those looking for the latest and greatest, it's an interesting choice, but though portable, it's far too big a bulge in the pants pocket to show off without embarrassment. In the end, the only ones we can think of are those who Nintendo marketing originally identified; old folks and those with eyestrain who simply can't do without the larger screens. Them -- and the younger version of ourselves.

When we were 15, we crammed our shiny new Game Boy Advance into our overloaded school backpack -- but one day we dropped it, only to hear a sickening crunch. If we could travel back in time and stick a sturdy DSi XL in there instead, we never would have had to cry over that cracked, inky black LCD screen.
In this article: aliasing, D-pad, directional pad, DirectionalPad, DS, DS Lite, DSi, DSi XL, DsiXl, DsLite, Fingerprints, Game Boy, Game Boy Advance, Game Boy Advance SP, Game Boy Pocket, GameBoy, GameBoyAdvance, GameBoyAdvanceSp, GameBoyPocket, GBA, GBA SP, GbaSp, glossy, handheld, handhelds, hands-on, Mario Kart, Mario Kart DS, MarioKart, MarioKartDs, Nintendo, Nintendo DS, Nintendo DS Lite, Nintendo DSi, Nintendo DSi XL, NintendoDs, NintendoDsi, NintendoDsiXl, NintendoDsLite, pixelated, pixelization, portable, review, reviews, unboxed, unboxing, WEP, WiFi, WPA, WPA2, XL
All products recommended by Engadget are selected by our editorial team, independent of our parent company. Some of our stories include affiliate links. If you buy something through one of these links, we may earn an affiliate commission.
Share
Tweet
Share