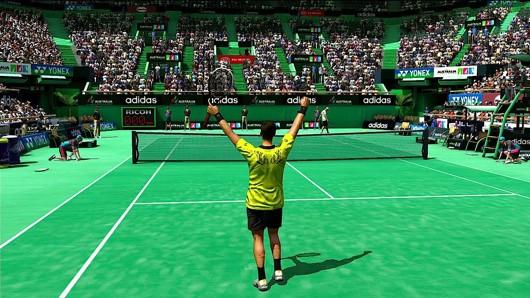 Sega has lobbed out its official announcement for Virtua Tennis 4. Previously announced only at a Sony conference, the new Sega note reveals that the tennis sequel is bouncing to Xbox 360 and Wii as well, all due in spring 2011. All three versions will include motion-control capabilities -- the PS3 version's Move compatibility was known (and motion controls for the Wii are obvious, though they will be "MotionPlus" controls), but this will be the first true tennis "sim" to make use of Kinect, since March's Top Spin 4 will not be Kinect compatible.

In addition to those new waving-at-the-game options, Virtua Tennis 4 also brings a new "World Tour" mode that builds a unique career path based on your decisions on the court. Spoiler alert: Deciding to win more will result in a better career. "Match momentum" is also new, adding an on-screen gauge that builds your player's "confidence" as it fills. The new online mode provides tournaments and matchmaking services for "the most engaging online experience for tennis gamers ever." Combined with the motion controls, that's going to result in a lot of really awkward-sounding, breathless voice chat. LONDON & SAN FRANCISCO (January 20, 2011) – SEGA® Europe Ltd. and SEGA® of America, Inc. are thrilled to announce that Virtua Tennis™ 4 will be making its way onto North American retail shelves for the Xbox 360® video game and entertainment system from Microsoft and the Wii™ system from Nintendo in Spring 2011. As previously announced, the game will also be available for PlayStation®3 computer entertainment system featuring PlayStation®Move compatibility and 3D technology.

Developed to take full advantage of Kinect™ for Xbox 360®, PlayStation®Move, and MotionPlus, Virtua Tennis 4 puts players closer than ever before to being out on the court. Fans of the world's No.1 selling tennis series can also enjoy all of the new features using regular controllers. Boasting its strongest ever player line-up across all platforms, Virtua Tennis 4 features the world's top stars such as world No.1 Rafael Nadal, 16-time major champion Roger Federer and UK No.1 Andy Murray. Joining them for the first time are seven new champions making their debut to the series, enabling players to take on the likes of Juan Martín Del Potro, Fernando Gonzalez, Caroline Wozniacki and Laura Robson.

"Virtua Tennis 4 is going to be a massive push forward for the series," commented Gary Knight, Senior Vice President of Marketing at SEGA of Europe and SEGA of America. "New technology has allowed for the development of innovative styles of gameplay, meaning Virtua Tennis can reach a level of realism not seen before in the tennis genre."

In addition, Virtua Tennis 4 sees a totally new World Tour career mode designed to encourage replay value with an element of off-court fame. Each decision affects a player's career path meaning no two careers will ever be the same, while a brand new on-court feature makes for even more dramatic singles and doubles matches. Players can build up their Match Momentum gauge over the course of a match and revel in their improved ability as their players grow in confidence.

The new Online Mode offers an invigorating experience with the choice of a competitive and casual area to suit all players. This new hub will be the most engaging online experience for tennis gamers ever, promising a more competitive matchmaking system and online tournaments geared to seeking out the ultimate Virtua Tennis Champion.

Virtua Tennis 4 is developed by the original Virtua Tennis Team in Japan and will be available in Spring 2011 for the PlayStation®3 system, Xbox 360 and Wii and has not yet been rated by the ESRB.
In this article: kinect, microsoft, motionplus, nintendo, playstation, playstation-move, ps3, q2-2011, release-date, sega, Virtua-Tennis-4, wii, xbox
All products recommended by Engadget are selected by our editorial team, independent of our parent company. Some of our stories include affiliate links. If you buy something through one of these links, we may earn an affiliate commission.
Share
Tweet
Share