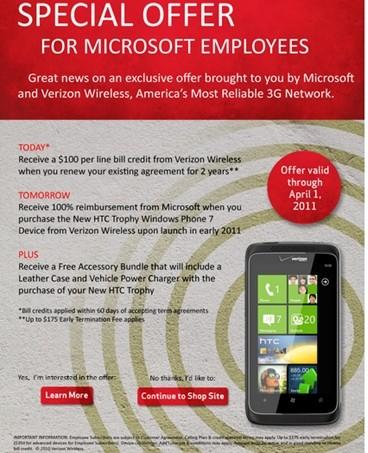 "Early 2011" is rapidly passing us by -- as, for that matter, is March -- but we still wouldn't rule out a Verizon Wireless launch of the HTC Trophy smartphone. You see, the carrier's seemingly still advertising the Windows Phone 7 device inside Microsoft itself, in a likely attempt to gather preorders before the device hits shelves. We can't say for sure when the phone will actually arrive, of course, but if we were the gambling type, we'd toss some horseshoes in the general direction of April Fools' and pray they find a mark.

In this article: ad, advertisement, advertising, HTC, HTC Trophy, HtcTrophy, Microsoft, Trophy, Verizon, Windows Phone, Windows Phone 7, WindowsPhone, WindowsPhone7, WP7
All products recommended by Engadget are selected by our editorial team, independent of our parent company. Some of our stories include affiliate links. If you buy something through one of these links, we may earn an affiliate commission.
Share
Tweet
Share