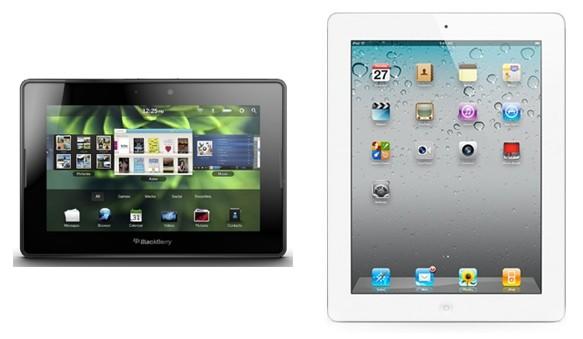 Much like their home countries, Apple and RIM share much in common, but contrast in important ways. Both companies are among the few that produce their own software for their cellular handsets. Apple, a personal computing pioneer, sees market expansion in smartphones. RIM, a smartphone pioneer, sees market expansion in mobile computing. Looking at the tablets on offer, Apple has been just as adamant in decrying a 7-inch display as RIM has been defending it, the latter saying that it sought to create an ultramobile device with the PlayBook.

Apple designs products for consumers that have relevance for enterprises. RIM designs products for enterprises that have relevance for consumers. This has also been evident with the PlayBook, which has taken heat for its lack of native e-mail and calendaring options. RIM consciously put these on the back burner because it wanted to appease CIOs concerned about data theft, even though it meant a less appealing launch product for consumers. Another parallel: RIM has suffered as AT&T delays in supporting Bridge, just as Apple struggled with AT&T supporting tethering on the iPhone.

Indeed, when Steve Ballmer took the stage at BlackBerry World in Orlando, it brought back memories of a scene that leads off the movie Pirates of Silicon Valley, when Bill Gates appeared on screen at Macworld Expo in 1997 to announce a deal that would make Internet Explorer the default browser for the Mac. Fourteen years later, Google has replaced Netscape as Microsoft's archrival and the BlackBerry has become a prize for Bing.

Despite some missteps and significant market share losses, RIM is nowhere near the state of financial crisis that Apple was in back then. However, in both cases, the appearance of a Microsoft CEO has been a sign of confidence in a platform against which Microsoft competes. So, if Apple was able to pull itself back from what Steve Jobs has called its "near-death experience," can RIM regain its lost luster too? Has it hit a bump in the road amidst a transition or is it in freefall as Nokia was prior to its recent overhaul?

Apple has one demonstrated advantage compared to its northern neighbor, and that has been an acute sense of timing. Like the big cats for which its Mac operating systems are named, Apple has shown a strong pattern of pouncing on the industry at just the right time. When the right components become affordable enough, Apple envelops them in a luscious layer of user experience to drive mass adoption. RIM, meanwhile, has seen growth stall since miscalculating the challenge of iPhone and its mercenary competitor Android.

Nonetheless, a key reason for optimism is the one-two punch of RIM acquisitions QNX, which handles the nimble, low-level plumbing of the BlackBerry Tablet OS, and TAT, which is infusing the historically efficient but stodgy RIM user interface with a sense of imagination, whimsy, and exploration. We have seen the beginnings of RIM assembling these pieces in programs such as the PlayBook's scrapbooking app, and also in sprucing up the workaday calculator with flourishes such as watching the calculation history get torn off like paper from a vintage adding machine. Here, RIM -- like Apple -- controls its own destiny. Unlike Nokia's position with Windows Phone 7, it need not, for example, keep reigns on a user interface direction to avoid disturbing consistency with competitors.

The challenge, as was acknowledged several times at BlackBerry World, is time. The core components are there. Now RIM is racing competitors to synthesize its acquisitions. It must create a competitive experience with headroom to grow across a suite of its own core apps, those of its developers, and, most importantly, expand from a dual-core tablet platform into a revitalized line of BlackBerry handsets. The sand in the hourglass is the goodwill of corporate and carrier customers that RIM says still have strong demand for its products and trust in its approach.

Ross Rubin (@rossrubin) is executive director of industry analysis for consumer technology at market research and analysis firm The NPD Group. Views expressed in Switched On are his own.
In this article: Apple, BlackBerry, column, iPad, iPhone, Microsoft, Pirates of Silicon Valley, PiratesOfSiliconValley, QNX, RIM, ross rubin, RossRubin, switched on, SwitchedOn, TAT
All products recommended by Engadget are selected by our editorial team, independent of our parent company. Some of our stories include affiliate links. If you buy something through one of these links, we may earn an affiliate commission.
Share
Tweet
Share