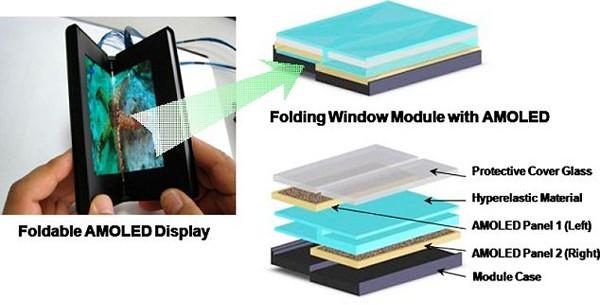 Samsung demoed some fascinating AMOLEDs at this year's CES, including 4.5-inch flexible and 19-inch transparent displays -- neither of which, sadly, will reach the market any time soon. But the innovation train keeps on rolling, and Sammy's Advanced Institute of Technology now has a prototype foldable display, which may or may not be the same reference design spotted at FPD 2008. Its two panels have a closing radius of only 1mm, meaning they practically touch when closed, yet show no visible crease when opened. In fact, the developers performed 100,000 folding-unfolding cycles to test the junction; the negligible 6% decrease in brightness was invisible to the human eye. They used commercially-available silicone rubber to achieve that seamless look, and the prototype featured a protective glass cover which could also function as a touchscreen. Obviously there's a market for touchscreens you can fold up and put in your pocket; here's hoping Samsung can make them available sooner rather than later.
In this article: amoled, AmoledDisplay, AMOLEDs, Display, fold, foldable, foldable display, FoldableDisplay, folding, oled, Samsung, screen, seamless, silicone, touchscreen
All products recommended by Engadget are selected by our editorial team, independent of our parent company. Some of our stories include affiliate links. If you buy something through one of these links, we may earn an affiliate commission.
Share
Tweet
Share