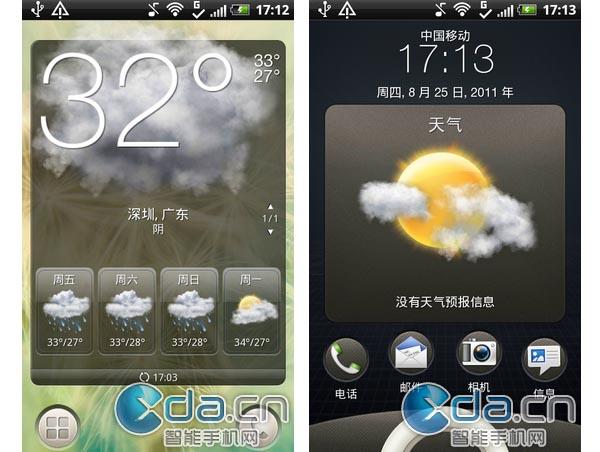 Now that you've seen high-quality images of the HTC Bliss with the screen turned off, are you curious to see what it looks like when it's on? The same folks at XDA.cn who got hands-on time with the Bliss have now come forth with possible screenshots showing the phone is indeed running on a beta version of Sense UI 3.5. What's new here? Even though the lock screen uses the same ring-style unlocking feature as its predecessor, it appears that the new UI will feature two dedicated buttons at the bottom of the home panel -- for the app tray on the left and phone on the right -- and refreshed widgets (including a larger weather panel), among other minor changes. Word also has it that HTC is removing hardware requirements that restricted version 3.0 to the company's highest-end devices, which gives hope to millions of Sense users still on an older, more streamlined UI. More screenshots can be found at the source link.
In this article: android, android 2.3, Android2.3, beta, bliss, dual-core, hardware, htc, htc bliss, htc sense, htc sense ui, HtcBliss, HtcSense, HtcSenseUi, leak, leaks, mobilepostmini, screenshots, sense, sense 3.5, sense ui, Sense3.5, SenseUi, single-core, weather, widget, widgets
All products recommended by Engadget are selected by our editorial team, independent of our parent company. Some of our stories include affiliate links. If you buy something through one of these links, we may earn an affiliate commission.
Share
Tweet
Share