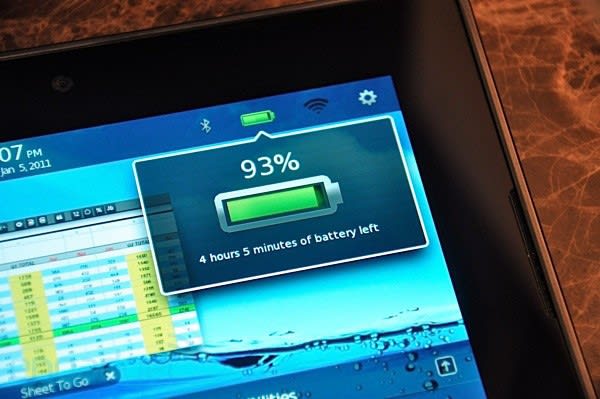 Hey, can everyone please stop talking about the iPad? RIM's been skirting around Apple's tablet, saying only that its upcoming PlayBook slate would have "comparable" battery life, but now it's dropped all pretense and called the iPad out by name. Specifically, the Canadian company's senior business marketing VP Jeff McDowell has promised that the PlayBook will offer "equal or greater" battery endurance to Apple's device, while using a smaller cell size. The latter part isn't hard to achieve, considering Apple filled most of its slate's innards with Li-Pol juice packs, but the promise of matching its autonomy from the wall socket is a big claim to make. Many people consider that to be among the iPad's foremost strengths, so RIM is surely aiming high by pledging to not only match it, but potentially better it. The PlayBook we saw in person wasn't quite up to that level yet, but there's still time until that March launch for RIM to turn bold words into a beautiful reality.
Via: @Lessien (Twitter)
Source: Reuters
In this article: apple, battery, battery life, BatteryLife, blackberry, blackberry playbook, BlackberryPlaybook, claim, ipad, jeff mcdowell, JeffMcdowell, plans, playbook, promise, research in motion, ResearchInMotion, rim
All products recommended by Engadget are selected by our editorial team, independent of our parent company. Some of our stories include affiliate links. If you buy something through one of these links, we may earn an affiliate commission.
Share
Tweet
Share