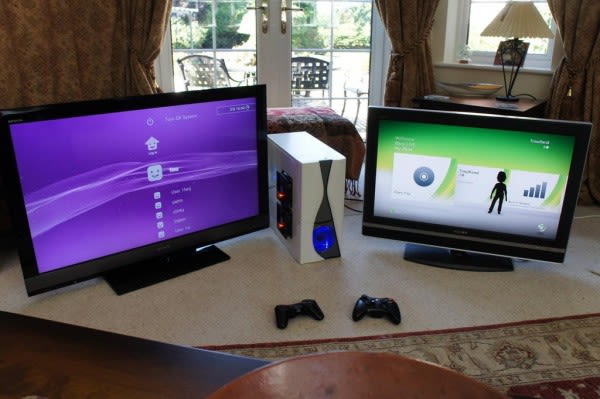 Sure, we've all thought about how nice it would be to have our PS3 and Xbox 360 consoles in the same enclosure. But, as many similar thoughts go, we left it at that. Not content with letting a good thought simmer, Reddit user timofend accepted the challenge and built himself a gaming mega-machine -- he stuffed the new slim model of Microsoft's console into a PC tower alongside an older 80GB PS3. Looking to save some funds in the process, the über-gamer skipped out on a liquid cooling system -- but he notes that when both machines are running simultaneously, they each hover around 100 degrees Farhenheit (38 degrees Celsius). Hey, we're not complaining... but really, timofend, can we please see a NES / Dreamcast / O.G. PlayStation combo in your next masterpiece? To take a peek under the hood, hit the gallery below. 4
Via: DVICE
Source: Reddit
Coverage: Game Informer
In this article: game consoles, GameConsoles, hack, microsoft, microsoft xbox, microsoft xbox 360, MicrosoftXbox, MicrosoftXbox360, mod, mods, playstation 3, Playstation3, ps3, sony, sony playstation, sony playstation 3, sony ps3, SonyPlaystation, SonyPlaystation3, SonyPs3, xbox 360, Xbox360
All products recommended by Engadget are selected by our editorial team, independent of our parent company. Some of our stories include affiliate links. If you buy something through one of these links, we may earn an affiliate commission.