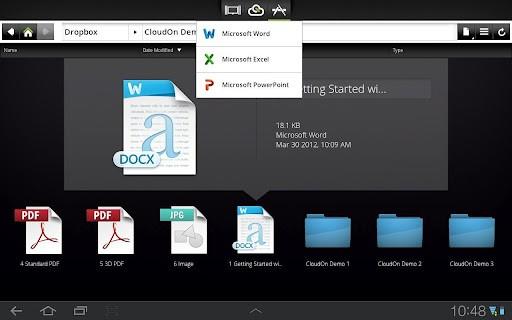 Indirectly or not, the other guys seem to enjoy their time spent with CloudOn's unorthodox delivery of Microsoft Office. Fortunately for you, the service just announced it's now available to the Android folk -- at least to those with a Google certified slate. The CloudOn application comes as a freebie and it's compatible with tablets running Honeycomb or Ice Cream Sandwich. Keep in mind that, aside from creating / editing docs on Word, Excel and PowerPoint, you'll also be able to open almost any file thanks to Adobe Reader. Furthermore, the company revealed it now offers support for Google Drive, joining the likes of Dropbox and Box as part of the cloud lineup. Ready to give it a go? It's up for grabs now via Google Play, but before you do that, there's a vid waiting for you past the break.

Palo Alto, Calif. – May 9, 2012 –– Mobile productivity leader, CloudOn, is announcing the launch of its popular workspace on Android, allowing tablet users in the US, UK and Canada to create, edit, save and share Microsoft Office and Adobe documents while on the go. The company is also announcing integration with Google's new cloud-storage solution, Google Drive, adding to its cloud storage service options, Dropbox and Box. Today's launch on Android brings CloudOn's powerful productivity tool to the second largest consumer and enterprise tablet market, expanding on the company's vision to create the most comprehensive and ubiquitous mobile productivity workspace.

To further enable mobile productivity, the app includes fast and easy email integration that lets users send emails and attachments with a single tap and without ever leaving the app.

CloudOn is custom build for the Android platform and fully optimized for Android Honeycomb and Ice Cream Sandwich tablets, version 3.1 and higher, making its comprehensive mobile productivity workspace available to millions of Android users. CloudOn transforms tablets into productivity tools by allowing users to work within the files and applications they need most and save them directly to leading cloud storage providers Dropbox, Box and Google Drive.

CloudOn first launched on iOS in January and was quickly one of the most popular business and productivity tools on the market, becoming the no.1 free iPad app in Apple's App Store within hours of its release. This April, the Company released a major upgrade to the app with version 2.0, adding integration with Adobe, the universal image viewer, and integration with Box – a favorite among enterprise users. Integrating with Google's leading mobile and storage products – Android tablets and Google Drive – was a natural next step in continuing to build out the most comprehensive mobile productivity tool on the market.