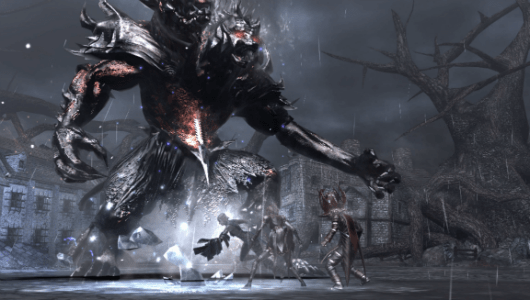 I'm still not clear what the actual name of the character I selected during my demo of Kenji Inafune's upcoming Vita game Soul Sacrifice was, nor was I able to grasp the more delicate workings of some of its deeper mechanics because the Tokyo Game Show demo I experienced was (surprise!) completely in Japanese. But I worked around it.

Though the context of the upcoming universe alluded me, the combat in Soul Sacrifice broke down language barriers ... because it spoke the universal language of kick ass.

Following a brief introduction to the world, I selected a character class that looked as though parts of its body had been riddled with plant life – much in the same way cyborgs are riddled with metal bits. After selecting the character's gender, myself and three other players were dropped into a dreary, medieval-looking town that had been overrun by various man-sized horrible creatures. Whenever a beast is downed, the game's titular mechanic comes into play: the player chooses either saving its soul or sacrificing it. It's very Bioshock in a way, though the immediate effect of either option was too subtle for me to divine during the session.

To kill these monsters, obviously, I had to make use of my character's various abilities, all of which were a completely bizarre blast to use, if slightly hilarious at first glance. Basic melee was accomplished via a large sword that appeared to grow from fibrous plant material in my arm, whereas ranged attacks involved summoning floating wooden spears, targeting multiple parts of the enemy's body with a reticle and then launching the volley of spikes after the maximum number of targets had been accrued.

I also had the ability to heal myself and control the earth, either by pulling boulders from the ground to form a shield, or by encasing myself in a sphere of dirt and rolling into baddies like some weird morbid Katamari Damacy spin off. My character's skills included the ability to summon an impressively massive (and subsequently destructive) floral beast, which aided my group's ongoing battle another impressive animal.

Defeating the beast – a Cerberus-like animal – took up somewhere around 15 continuous minutes of dedicated combat alongside my co-op partners. During the battle, Soul Sacrifice's camera had the tendency to lose its focus on the action when in close proximity to the creature; however, the game is still in a preview state. The lack of a lock-on during melee combat resulted in me sticking to a regiment of hurling javelins at the beast to ensure damage would be done.

Eventually though, my incredible plant powers (along with the abilities of my team) were enough to fell the beast. Soon it was revealed that the Cerberus was revealed to be a human soldier, corrupted by some horrible (possibly dog-based) evil. Everyone in the group was given the option to save or sacrifice the fallen hero, and while I chose to save the poor man, the other journalists at the table chose to sacrifice. Because majority rules, the man's life was spent.

Beyond this, however, interaction between all four players seemed limited – we were all trying to kill the same beast, granted, but there was no truly cooperative aspect to the fight beyond directing damage at the same target. Whether this was part of the design, the result of the group's character selection choices, or part of what we all lost in translation was clear.

The soldier's death marked the end of the match, and subsequently my time with my earth-powered wizard and his giant floral companion. Save for some hiccups with the camera and moments of imprecise control, Soul Sacrifice's combat was spot on, delivering consistent action throughout the demo. The inventive character abilities and inspired creature design, combined with an incredibly dense personal feeling of power and might, made for a remarkably solid experience, even this early in development.

Soul Sacrifice is coming the PlayStation Vita in 2013.
In this article: comcept, hands-on, Keiji-Inafune, plantomancy, playstation, playstation-vita, SCEA, Sony-Computer-Entertainment-America, soul-sacrifice, tgs-2012, vita
All products recommended by Engadget are selected by our editorial team, independent of our parent company. Some of our stories include affiliate links. If you buy something through one of these links, we may earn an affiliate commission.