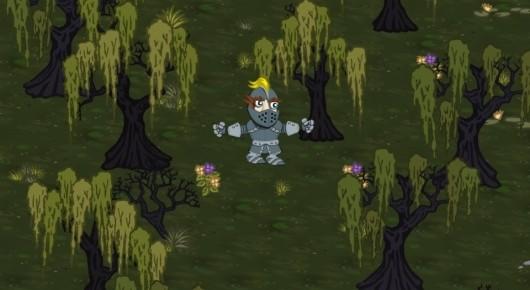 Almost three years ago, a quirky and charming MMO died. It was NCsoft's Dungeon Runners, a Diablo-like action title that had a wicked funny streak running through it. We were genuinely sad to see it go away, but perhaps not as sad as its producer, Steve Nichols. In fact, Dungeon Runners was such an influence on his life that when he moved on to a new studio, he brought with him the idea of creating another MMO in the same vein.

Today we caught up with Nichols to talk about that project, called Heroes of Evermore. Heroes of Evermore is currently in pre-alpha but is pushing hard to make strides in 2013 toward release. What would the spiritual successor to Dungeon Runners look like? You're about to find out!

Massively: Tell us about your company, The Retired Astronaut Collective, and the MMO experienced devs that you have on staff. Also, how did that name come about?

Steve Nichols: The Retired Astronaut Collective is a small independent game and app developer that I joined about two years ago. The name came about because two of the original founders had some experience working for NASA. That, and the name is really cool. You'd be surprised how many people ask me if I'm an ex-astronaut.

When I say we're a small company, I mean it. We're just a handful of full-time folks and contractors who are trying to make a go of things in the indie space.

As for the staff, we have lots of experience making games and MMOs in particular. The bulk of my 20-year career has been focused on making online games and MMOs. I started out making MMOs over 15 years ago with my pioneering work on The Realm. I've also been involved in several other MMOs: Dungeon Runners, Shadowbane, Middle-earth Online, Kingdoms of Might and Magic, and several other unnamed miscarriages of big-budget production houses.

My partner, Chris Chuter, has his share of experience with MMO development as well. He cut his MMO teeth working on Shadowbane at Wolfpack Studios and Kingdoms of Might and Magic at Ubisoft. And then there's relative newcomer to the company, designer extraordinaire Mark Tucker. He's worked on several well-known games including Brute Force, Halo 4, Freelancer 2, Dungeon Runners and Crimson Alliance. We also utilize several other artists and coders as needed to complete our projects.

So what is this Heroes of Evermore project you're excited about?

You're damn right we're excited about it! Heroes of Evermore is a player-friendly MMO that's heavily influenced by games like Dungeon Runners and Realm of the Mad God. We're taking the core element of frenetic, addictive combat and marrying it to the deep item game we developed with our work on Dungeon Runners. Our goal it to make an experience where you can hack and slash your way to wicked glory and phat loot in a ever expanding series of procedurally generated and irreverent game worlds. See if you can say that three times fast!

Look, we've got two of the principal developers for Dungeon Runners heading up Evermore. You can expect this game to be filled with ludicrous weapons, absurd monsters, outlandish skills, and really deep randomly generated content. We're making the MMO that we want to play, and it's gonna be an addictive game that you won't want to put down. Of course, we do realize that gamers with families need to be able to put the game down... so we're making sure the game is friendly to that need. That's what I mean when I say "player-friendly": crazy addicting fun that doesn't require four hours in a sitting to accomplish something worthwhile.

Is this any relation to the classic RPG, Secret of Evermore?

No, the games are unrelated. We just love the name Evermore because it captures the essence of our procedurally generated content. There's ever more of it! Get it?

Is this pure fantasy? I thought I saw a cowboy!

If, by fantasy, you mean purely swords, sorcery, Elves, Orcs, and Hobbits, then no, it's not pure fantasy. But if you mean fantastic creatures, magic, guns, bows, and cowboys, then yes, it is. It's fantastic but not Tolkienesque.

What classes and races will you have?

Heroes of Evermore sports a classless RPG system. We don't force you to play in any particular way. Want to be a spellcasting cowboy? Cool by us! How about a healing tank? Great! As a player, you mix and match the items and powers you find in the world to customize your character. This makes building the exact character you want a matter of luck and perseverance. No two of your characters will be exactly alike.

What kind of settings does the game create?

Each game world is unique in its configuration but also shares similarities. The surface world contains all kinds of biomes: forests, deserts, swamps, beaches, jungles, rivers, tundras, and more! Scattered throughout the world are special encounters, dungeon entrances, and crafted challenges to overcome and enjoy. Once you've fully explored one world, there's another one waiting for you. World upon world, evermore!

Since you cite Realm of the Mad God as one of the game's inspirations, will Heroes of Evermore have a similar permadeath/reroll system?

We are very much inspired by Realm of the Mad God for a couple of reasons: its accessibility and addicting gameplay. We've taken a few design cues from them, but they're limited. I've been itching to do a permadeath system in a MMO since my days on Middle-earth Online. So, yeah, permadeath and regular character rerolling are part of the game. The way we approach character rolling and building is pretty novel; we see an opportunity to create really fun experiences based on relatively short-lived characters. Skilled players will live a long time, no doubt, but we're creating a game where it's very much OK (and even fun) to die.

How extensive will the game be in terms of features?

The initial release is focused on the core elements of combat, character development, and exploration. We're going to nail those hard and fast before moving on to more features. We will, of course, have robust social, grouping, and trading features before release.

How will you monetize the game?

The game will be free-to-play. In-app purchases for vanity items and other various and sundry items will hopefully pay the bills! There may be in-game ads for some platforms.

Will it be browser-based or client-based?

We are going to release this game on as many platforms as possible. Our proprietary game engine supports PC, Mac, iOS, Android, and Windows Mobile. We also have the ability to release our games on the web through our sweet custom plugin called the Retired Astronaut Launchpad. So it's gonna be on the web, on your desktop and on your phone and tablet. We want you to accommodate your playstyle. Whenever you want to play, you should be able to.

When are you looking to test and release Heroes of Evermore?

That's a good question. We've made a lot of progress on the game in the past four months. We've got our art pipeline defined and functional. We've got our client up and running. We've got some random worlds generating. We've even got some rudimentary server infrastructure in place. While we're making great progress, we still have a lot of work to do! Finishing this game is going to be expensive and likely take another five or six months.

We've been toying with the idea of doing a Kickstarter to help us get the funds required to finish the game. This isn't something we want to rush into, though. Before taking the plunge, we'd like to build a community of interested players and start interacting with them and taking their temperature on where we're taking the game.

That's why it's so fortuitous to be talking with Massively about this project. Perhaps some of your readers that enjoyed our work on Dungeon Runners and The Realm might want to head over to the site and join in the conversation?

We'll be sure to do that! Thanks for sharing this project with us.
In this article: android, browser, chris-chuter, dungeon-runners, evermore, featured, heroes-of-evermore, interview, ios, kingdoms-of-might-and-magic, launchpad, mac, mark-tucker, middle-earth-online, mobile, nasa, ncsoft, permadeath, realm-of-the-mad-god, retired-astronaut-collective, shadowbane, stephen-nichols, steve-nichols, the-realm, the-realm-online, ubisoft, windows, wolfpack-studios
All products recommended by Engadget are selected by our editorial team, independent of our parent company. Some of our stories include affiliate links. If you buy something through one of these links, we may earn an affiliate commission.