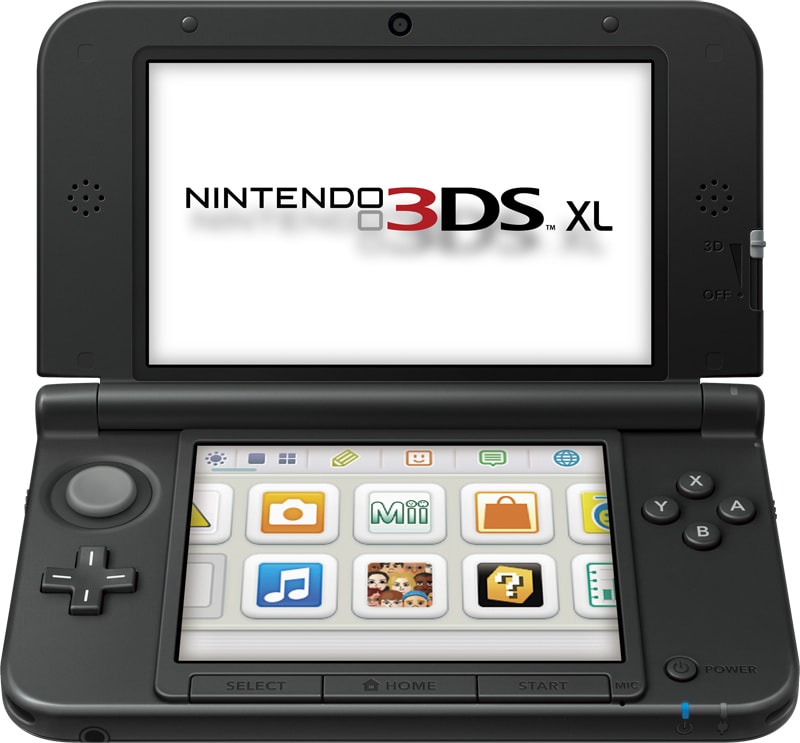 If you like your portable gaming three-dimensional, clam-shelled and big, then Nintendo's 3DS XL fulfills those broad, unconventional requirements. It's a design refresh that more closely references both previous generations of DS hardware (and the incoming Wii U) -- all while touting a substantially bigger, 3D-capable, parallax-barrier screen. Aside from a larger battery, the XL's internals rehash what we first saw over a year ago: the controls remain the same, with no addition of a (mildly) hardcore gamer-courting second analog stick. For what it's worth, the device does arrive with a 4GB SD card in-box (up from 2GB in the original), matching the approximate doubling in physical dimensions. 18 months is a long time in gaming, especially these days, and although 3DS sales have recently rallied against Sony's latest, we reckon the 3DS XL has double the appeal of its forebear. We'll explain why right after the break.

If you've been holding off from buying a 3DS, the improvements to the screens and battery are enough to warrant a purchase, but some issues still remain.

How would you rate the 3DS XL?
We want to hear what you think. Post a quick review now to join the conversation!
Write a review

It's a huge relief to see Nintendo return to the cleaner, tidier lines of the DS Lite and DSi. Gone are the awkward tri-colored gloss and the angular, bizarre shape of the 3DS. Instead, it's now a simple, softly curved oblong, which looks more mature and considered. Closed, the 3DS XL's matte finish wraps around both halves -- and unintentionally reminds us of Sony's Tablet P. Fortunately, the casing is far more solid than that Android tablet, and feels much slimmer. In fact the device's thickness feels (and measures) roughly equal to the 3DS, despite the explosion in screen size, improved battery life and a 46 percent weight increase to 336g (11.85 ounces).

While gamers with smaller paws may not agree, the 3DS XL feels more at home in-hand than the 3DS -- not to mention, it looks a good deal classier than what came before. Thanks to those rounded corners, the device doesn't dig into your palms like its slightly squarish predecessor. The circle pad is still supremely comfortable, just the right side of tactile, while the faithful Nintendo button medley and D-pad still do the trick.

We don't understand why they couldn't have embedded another analog stick into the 3DS XL -- certainly, it's not for lack of space

Even more than what's changed, it's what's still missing that baffles us. Given that the 3DS has been furnished with a secondary analog stick through a slightly unwieldy peripheral, we don't understand why they couldn't have embedded one into the 3DS XL -- certainly, it's not for lack of space. Our review sample arrived with Resident Evil: Revelations in the slot -- a game that's not very forgiving without that second stick. It's also worth adding that while the plastic stylus on the bigger hardware remains functional enough, we miss the classy, extendable chrome pen that arrived in the original 3DS. The collar buttons are just as responsive as Nintendo's preceding handhelds. And if you weren't a fan of the cheap-looking button trio underneath the secondary screen, you'll be glad to hear that the odd bar has been replaced by three more standard-looking -- and feeling -- buttons. The SD slot has been repositioned to the right edge, meaning that Nintendo's sticking with standard removable storage. There's also now a horizontal cubby for the aforementioned stylus, referencing the DS Lite and DSi of gaming past.

Bigger is better. Maybe it's our review-jaded eyes, but the larger, 4.8-inch screen (just shy of the width of the PlayStation Vita, although slightly taller) seems to make the 3D effect less taxing, not to mention more immersive. The similarly expanded secondary screen also offers more real estate for touch-heavy titles. The pair of screens, however, still looks a little incongruous, each boasting different sizes and dimensions. While matching the humble resolutions found on the original, we found the screens both had comparable (if average) viewing angles. The main screen may be 1.8 times larger, but it packs the same 800 x 240 resolution of last year's model -- now spread a little thinner, with the more typical 'flat' 320 × 240 display also unchanged on the secondary.

Even if the 3DS XL doesn't win on crispness, however, Sony's onyx wonder can't (and never will) output 3D content

Purely number-wise, it doesn't sound impressive to anyone spoiled by Retina displays and the like. The screens on the original weren't the sharpest back then, but the jagged edges on fonts and detail is noticeably more pronounced on the bigger model. It goes without saying that the Vita's screen is a stronger performer, both visually and technically (being capacitive and all). We presume this is why Nintendo imposed filming and photography restrictions on its reviews for the 3DS XL, even though pixel math dictates that the bigger screen won't look so hot close-up. Even if the 3DS XL doesn't win on crispness, however, Sony's onyx wonder can't -- and never will -- output 3D content.

So apart from size, the hardware hasn't changed that much. The same can be said for the software, but it's a good chance to see how Nintendo's embraced online content and gaming in the midst of strong smartphone contenders. Since launching last March, Nintendo's baked-in software, including eShop, Spot Pass, Mii Plaza and online functions, have had time to grow and it's particularly noticeable when it comes time to interact with other users. During the first few months of use, you weren't going to pick up many Mii visitors -- not unless you were hanging around gaming writers, tech bloggers and importers, anyway.

Now, whether we flit across the country by train or park somewhere in center city, we pick up new Miis -- and accessories -- in the process. Admittedly, the games that tie into this social component really aren't worth your time, but the simple process of connecting with other users -- and being notified of it -- still makes us smile. The uncomplicated approach makes online gaming a cinch. With access to WiFi, we could connect in-game with a single option selection and would soon be battling strangers with far greater skills than we could ever muster. The friend PIN system also allows you to connect with real-life competitors.

The augmented reality games are still baked into Nintendo's newest portable, although they haven't moved on in any way. If you've played with them on the original, you're getting the same deal again here. The Nintendo eShop has expanded its offerings since we last opened our online wallets for the 3DS launch, with its wares separated out for ease of navigation. "In Stores" houses demos of incoming 3DS titles, and is presumably where the full-length games will be housed in the near future. Next is the Virtual Console, wrapping up NES, GameBoy, GameBoy Color and (gasp) Game Gear titles for anyone over 20 to replay again. It's joined by software and mini-game channels and a recommended videos collection. Unfortunately, the likes of Netflix and Hulu weren't available on our review model here in the UK and overall it's still not as good as it could be. While it does give taste of how content will be sold through Nintendo in the future, we'd like those to be available now, not in another two months.

Nintendo reckons you'll see around three to six and a half hours of gameplay from 3DS titles, and between five and eight for simpler DS games. In our experience, we managed an average of four hours of playtime in full-fat gamer mode, with the 3D switch and brightness cranked up to maximum, WiFi connected and around two hours of online play folded into our test. As even Nintendo forewarns on the console, how the 3DS XL is used has a huge impact on total runtime. Switch off the 3D mode, dabble with older DS titles and retro hits, and you'll see a substantial improvement in battery life. We did just that, also switching on battery saver mode and dropping brightness down to the middle setting, and got closer to nine hours of playtime -- it's a substantial improvement but obviously means limiting your gamer habits to some extent.

Nintendo's explanation for the lack of an AC adapter in both European and (some) Asian countries is that most buyers will be coming from older hardware -- naturally. Thus, buried in the settings menu, is the option to transfer your content -- like your digital purchases -- across from original 3DS consoles and the DSi. You'll need both devices and an SD card to get it done, and it feels like an exercise in frustration compared to the effortless systems in place for other gaming challengers like Google Play, which allows you to house your purchases on multiple devices without so much hassle.

After playing with the 3DS XL, we returned to the original only to find it difficult and awkward to use in comparison. The new size is an improvement in so many ways, including ergonomics and playability. The bigger screen makes 3D gaming less tiring, and offers a larger sweet spot for Nintendo's all-important gaming effect, while the curved edges simply fit your hands better. Competition remains tough, however. The Vita remains clearly ahead technically, while Nintendo banks on its strong in-house software team to bring in the customers. Pitch Resident Evil: Revelations against Uncharted, or Super Street Fighter IV 3D against Marvel Vs. Capcom 3, and it's clear to see on those big ole' portable screens which has the most potent hardware. But if you've been waiting out for a 3DS Lite before taking the plunge into 3D waters, then we can't help but recommend Nintendo's latest. We just hope the company can give its online content offering a shot in the arm soon, as it's really starting to age the hardware.

In this article: 3d, 3ds, 3ds xl, 3DS XL review, 3dsXl, 3dsXlReview, ds, handheld, handheld gaming, HandheldGaming, nintendo, Nintendo 3DS XL, nintendo+3ds, nintendo3ds, Nintendo3dsXl, portable gaming, PortableGaming, review, video, XL
All products recommended by Engadget are selected by our editorial team, independent of our parent company. Some of our stories include affiliate links. If you buy something through one of these links, we may earn an affiliate commission.
Share
Tweet
Share