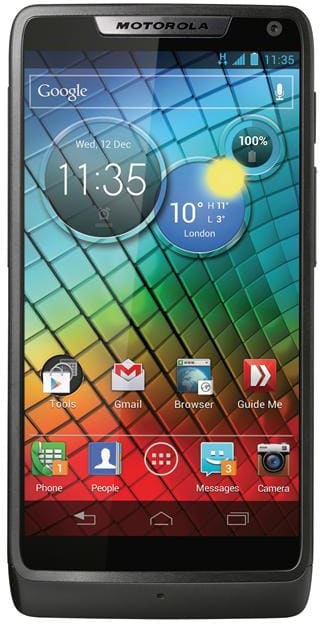 If you're getting a serious dose of déjà vu, we're right there with you. The RAZR i is a version of Motorola's Droid RAZR M that's headed to Europe and South America with a few differences. For the most part, though, it's cut from the same Kevlar cloth: you get a 4.3-inch AMOLED screen with qHD (960 x 540) resolution, an 8-megapixel rear camera, a 2,000mAh battery and 5GB of built-in storage -- with a microSD slot for expansion.

So what's different? On the outside, the RAZR i gets a physical, two-stage camera button. It's a welcome addition, but Intel reckons that its 2GHz processor is what you should be concerned with. It's the highest-clocked Medfield processor we've seen yet -- and perhaps more importantly, it's been placed in a core phone-maker's device. We've already come a long way from the Orange-branded San Diego. So how does this compare to the Qualcomm-powered (and LTE-capable) RAZR M? Will this Intel iteration charm us the same way? Join us after the break to find out.

The RAZR i is a pleasure to use, and is more than capable of handling your various smartphone tasks. Still, there's work to be done on app support for Intel's Medfield chips.

How would you rate the RAZR i?
We want to hear what you think. Post a quick review now to join the conversation!
Write a review

The RAZR i is just as likeable as the RAZR M. There's the same aluminum edging around the 4.3-inch screen and the same sloping chin. The device feels quite rigid, thanks to Motorola's hallmark Kevlar backing, although the aluminum rim did begin to show itself underneath the black paintwork after some light scratches. However, the Gorilla Glass-coated screen remained unfazed during its time in our pockets and on our desks. There's no detachable battery and the only access offered by the phone is the wafer-thin panel covering the micro-SIM and microSD slots. The micro-USB port, also found along the left edge, is uncovered, but Motorola had the foresight to bathe both the surface and internal circuitry in a water-resistant coating, which should stand up to the wet weather conditions many Europeans will face heading into winter.

On the right edge, the power button continues to use the concentric metallic finish found on other RAZR devices, with the volume rocker matching the plastic of the handset's shell. Additionally, the RAZR i gets treated to a physical camera button, something that was left off the RAZR M. The device features on-screen Android keys, which appear glowing on that Super AMOLED display.

A front-facing 0.3-megapixel camera sits to the right of the Motorola logo above the screen, while the primary 8-megapixel camera is centered at the top of the rear cover, along with an LED flash. As before, it occupies the same plastic panel as the loudspeaker. Below that, the woven Kevlar backing shows off more Motorola branding and a brief mention of the Intel processor. There's no carrier branding on this one and due to the lack of it, no mention of 4G LTE either. The phone has a pentaband GSM radio, meaning you could run it on AT&T or T-Mobile's networks (WCDMA 850/900/1900/2100 and GSM 850/900/1800/1900 900/2100) though you'll only be dealing in HSPA+. On Speed Test, we measured speeds of around 4.5 Mbps down and 800 Kbps up -- on par with other devices.

The device is as thin as you'd expect for a RAZR product, and if we have any complaint it's with Motorola's attempt to bill this as an "edge-to-edge" display. The side bezels are very much visible, if thankfully narrow (the iPhone 5 has a similarly waifish framing to its display as well). It just isn't edge-to-edge. If it does have one edge it's a jaggy one -- we're talking about the rough renderings produced by that PenTile setup. While the Super AMOLED works its magic on those on-screen blacks, you'll still suffer some pixelation woes if you get too close to the qHD (960 x 540) surface.

Once again, Intel has put effort into improving camera performance in the phones it powers. The Burst Shot feature was a surprise in the San Diego -- it struck us an amenity worthy of a higher-priced phone, and the 10-shot option has also carried over. Unfortunately, the Orange smartphone wasn't a great picture-taker, a shortcoming the RAZR i ably dodges. Like the RAZR M we just reviewed, the RAZR i wields a capable 8-megapixel autofocusing lens and color balance is generally good.

The phone does miss out on white balance options, and while colors were pleasantly saturated, you'll find it sometimes gets it quite wrong, as you can see in the bluish woven table mat featured in the sample gallery. There's some consolation in the functional photo editor, which allowed us to balance warmth to more sensible levels. There's also an optional HDR mode, which the phone will even suggest itself in low-light conditions, although we found worse lighting dictated noisier results. See for yourself in our gallery, but the HDR results are pretty good, offering detailed highlights that would have otherwise been lost.

Video performance is passable -- the camera's autofocus takes its time to lock on and tap-to-focus only works on the whole image, you can't choose to focus on something that isn't already within the center of the frame. Audio recording, however, is crisp and played back well both on the RAZR i and bigger screens.

How Motorola has revealed Android 4.0 on its Europe-bound RAZR is another pleasant surprise: it hasn't strayed far from the Android designs seen on Google's Nexus devices. The handset maker (now part of Google itself) has, however, added some welcome extras. Swiping to the right from the main home screen will bring you to a quick settings menu, replacing the WiFi and GPS shortcuts found in the drop down menu on other Android devices.

Home screen window dressing arrives in the form of Circles, a bit of smartphone gloss that includes flippable space-fillers with weather, time and battery info. Motorola has also kept its Smart Actions, which bring some degree of automation to your phone, whether it involves uninterrupted sleep or efforts to draw out your battery for a little longer. This feature still requires a bit of effort on the user-side, but that's only due to the degree of customization on offer here. If you're willing to tweak and reshape the pre-built actions, you'll be rewarded with improved battery performance and fewer interruptions.

When we benchmarked the RAZR i recently, we ran it through the same battery of tests, in case any firmware updates brought any performance improvements. Motorola claims the Intel Atom Z2480 processor inside is capable of "up to 2GHz," but it should at least be able to reach that impressive clockspeed at full tilt.

The results remain largely unchanged, but after spending a week with the device, we'd like to add that the web browser still gives a superb performance . The phone made a decent effort on more processor-intensive tasks, including a brief game of Max Payne. Due to that Intel chip, however, the RAZR i doesn't support all the apps on Google Play. Two notable examples are Adobe AIR, which underpins several media streaming apps, and Adobe Flash. Having said that, compatibility has improved since six months ago, with the likes of Netflix and Temple Run now installable. Just days ago, too, Google updated its Chrome app, which now works on Intel-powered devices running Android 4.0.

We also had the chance to pit the RAZR i against the Droid RAZR M. Aside from the benchmark results outlined above, the Medfield entry offered a marginally faster response to most actions. Powering up both phones, the RAZR i landed at its home screen around 12 seconds ahead of the Snapdragon sibling. Loading into the Chrome browser was around the same speed on both, likewise the camera app -- both launching and capture -- was equally swift on both. It's interesting to note that the color balance appeared more natural on the screen of the Verizon version, which matches up with our results in the camera test.

In addition to this admirable performance, we were interested to see how Intel's mobile chip fared in terms of battery life -- with the Motorola RAZR M sharing screen similarities and more, we can make a better judgement on whether those promises stand up. On our battery rundown -- video playback, 50 percent brightness, WiFi and 3G on, social networks and email on sync -- Intel's iteration lasted nine hours, compared with eight hours for the RAZR M. That's a marginal victory, but as with the LTE version, we were more impressed with how the phone managed to go the distance on typical or mildly intensive use. Ultimately, we never felt the need to seek out a charging port during a day's work.

The RAZR i is easy to recommend, especially if bigger phones are an ergonomic no-go.

Intel continues to march out better handsets -- the RAZR i is a more accomplished, more premium handset than the San Diego, although we're still waiting for Intel to step up and power a flagship device. Perhaps once it's got the LTE compatibility sorted, we'll see the chip maker power bigger (and probably pricier) handsets. The 2GHz Medfield processor dishes out performance that you'd be hard pressed to distinguish from many Snapdragon-powered dual-core phones in day-to-day use. Elsewhere, the RAZR i is just as accomplished as its trans-Atlantic twin. It bests plenty of existing middleweight smartphones like the Xperia P, with solid hardware, a breezy (borderline vanilla) UI and a surprisingly decent camera. Expect the greatest screen or the fastest performance and you're likely to be a little disappointed, but at this upper-middle price point -- and free on several modest contracts here in the UK -- the RAZR i is easy to recommend, especially if bigger phones are an ergonomic no-go.

In this article: Atom, droid razr m, DroidRazrM, Google, intel, Intel Atom, Intel atom mobile processor, intel medfield, IntelAtom, IntelAtomMobileProcessor, IntelMedfield, medfield, mobilepostcross, motorola, motorola razr i, motorola razr i review, MotorolaRazrI, MotorolaRazrIReview, razr, razr i, razr i review, razr m, RazrI, RazrIReview, RazrM, review, video
All products recommended by Engadget are selected by our editorial team, independent of our parent company. Some of our stories include affiliate links. If you buy something through one of these links, we may earn an affiliate commission.
Share
Tweet
Share