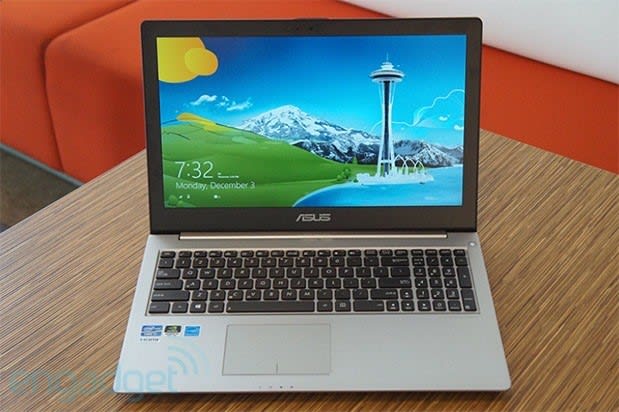 Windows 8 has ushered in an era of category-defying devices, with hybrid machines that bend, flip around, lie flat and otherwise contort flooding the market (and our offices). When virtually every Windows 8 product we've reviewed possesses acrobatic abilities, it's easy to forget regular ol' laptops are running Microsoft's new OS, too. One such machine is the $1,949 ASUS Zenbook UX51Vz (aka the U500), a 15-inch Ultrabook with the trappings of a multimedia powerhouse, including a quad-core Core i7 processor, NVIDIA GT650M graphics and a 1080p IPS display -- and no gymnastic tricks up its sleeve. Another thing it doesn't have: a touchscreen, which is available on plenty of other Windows 8 notebooks, not to mention other upcoming Zenbook Prime models. Considering that (possibly glaring) omission, is the UX51Vz still an attractive option at this premium price point? Head past the break to find out.

ASUS' Zenbook line scores high in the looks department, and the UX51Vz sports the same signature spun-metal lid and all-metal chassis as its predecessors. Those features make for a classy, super-slim Ultrabook (as evidenced by the UX31A and the UX21A before it), and they still go a long ways toward making the UX51Vz's larger 15-inch size more palatable. It definitely doesn't feel as sleek as the 13-inch Zenbooks, but it's mighty attractive for a big rectangle. Still, that's not to say this notebook is a waif: weighing four pounds and measuring 0.99 inch at its thinnest, it can't compare to the 15-inch Samsung Series 9, which checks in at 3.5 pounds / 0.58 inch thick.

In addition to boasting good looks, the UX51Vz has the build quality of a high-end machine. It feels very sturdy in the hand -- and very light for a four-pounder, we might add. The hinge exhibits no creakiness whatsoever, and the lid and bottom don't bend under pressure. Flip the laptop over and you'll notice that the brushed-metal motif carries over to the bottom. ASUS sealed off the underside, so you won't have easy access to the battery, SSD and so forth.

In addition to good looks, the UX51Vz has the build quality of a high-end machine.

Time for the formal tour: on the left side of the UX51Vz you'll find the power jack, Ethernet port, HDMI and two USB 3.0 connections. The right side is home to the microSD card slot, another USB 3.0 port, mini-VGA and a connection for the tiny external subwoofer, which comes in the box. ASUS also bundles a mini-VGA-to-VGA dongle, along with a USB-to-micro-USB converter. Back on the deck, the speaker grille sits at the top of the keyboard. And at the front edge of the system, under the trackpad, you'll find four indicator lights (for hard drive, wireless, num lock and caps lock).

Since the UX51Vz doesn't sport a touch-enabled display, the spotlight shines extra brightly on the keyboard and touchpad. As these are your only onboard options for interacting with Microsoft's touch-optimized OS, you'll want assurance that these are finely tooled instruments. We're happy to report the ergonomic outlook is good.

For one, the slightly recessed, island-style keyboard offers enough travel to make typing sentences a fluid experience -- you won't stumble over individual letters due to shallow keys. When we gave a typing test a whirl, we achieved moderate typing speeds but very low error rates. Another highlight: the palm rest is huge, so your wrists won't dangle off the edge of the machine.

The touchpad is situated slightly off to the left side of the deck, and it's plenty roomy. We found it to be a noticeable improvement over other Zenbooks such as the UX31A. Windows 8 gestures like swiping in from the right to reveal the Charms Bar work reliably, though single-finger tracking is still a bit finicky. It's really an issue of having to apply more pressure than you might like to get the cursor under your control. And if you've played with any touch-enabled Windows 8 machines, your biggest problem will be overcoming the instinct to touch the display.

With a 1080p resolution, the UX51Vz's 15.6-inch IPS display provides a great canvas for watching movies and browsing the web. The panel quality is especially noticeable when you view the Windows 8 Start Screen: tiles pop out in true, bright hues against the vibrant background. This is a colorful UI, and this screen does it justice. The matte finish and IPS technology lend the machine very wide viewing angles as well -- you can tip the screen a ways forward before images start to wash out, and watching Netflix with friends shouldn't be an issue, as we had no problem viewing the action even at extreme off-angles.

Of course, we can't fully sum up this laptop's display without touching on what's conspicuously missing. The lack of a touchscreen -- on a $1,949 machine, no less -- is, well, curious. Yes, adding a touch display would add weight to the already-substantial machine, but given that Windows 8 sports such a finger-friendly interface, the UX51Vz might feel like an incomplete version of the W8 experience. We found ourselves tapping at the panel simply out of habit, but quickly adapted to the non-touch model -- the comfortable, responsive keyboard and clickpad certainly make that omission easier to swallow. Then again, the UX51Vz isn't a convertible, so you won't be using it in tablet mode, which is when you're most likely to crave those touch features.

The UX51Vz's built-in stereo speakers pack Bang & Olufsen ICEPower Audio Technology, and they deliver loud -- albeit slightly fuzzy -- audio. Songs and videos play back with a moderate amount of bass, though audiophiles will note that sound could be crisper. To bolster the laptop's multimedia cred, however, ASUS includes an external SonicMaster subwoofer in the UX51Vz's box. Plug this in, and you'll be treated to audio that packs more oomph. The peripheral enhances both gaming and music-streaming sessions; we'd definitely recommend keeping it on hand.

We tested the UX51Vz with a quad-core 2.1GHz Core i7 processor, 8GB of RAM and a 256GB SSD made by SanDisk. Those cushy specs lend the system good performance numbers, most of which trounce the Windows 8 systems we've tested so far. In the disk benchmark ATTO, for example, the ultraportable turned in top read speeds of 908 MB/s and write times up to 567 MB/s. Those blazing I/O speeds are bested only by the Acer Aspire S7 among machines we've tested recently. The UX51Vz takes a breezy 12 seconds to cold-boot into Windows 8, and in general navigating the Start Screen and desktop feels fast and fluid.

ASUS bills the UX51Vz as a multimedia machine, and the laptop packs NVIDIA's GT650M chip with 2GB of dedicated memory along with integrated Intel HD Graphics 4000. On the synthetic graphics tests 3DMark06 and 3DMark 11, it scored miles above systems with integrated graphics, and it also performed well when we played a few games via Steam. When we fired up titles like Mafia II, action looked fluid and frame rates hovered in the 40 to 60 fps range. That's a solid showing, though the fan is clearly burdened by the workload. Just a few minutes into the demo, the whirring started and the machine felt slightly warmer.

The machine packs an eight-cell 70WHr battery, and when we ran our battery test (looping a locally stored video on loop with display brightness set to 65 percent), it lasted five hours and 15 minutes. (ASUS rates the system for a slightly longer five hours and 38 minutes.) We've seen many, many Windows 8 devices with touchscreens turn in very short runtimes, and given that the UX51Vz doesn't pack a touch display, we expected it to offer better longevity. Plus, this 15-incher could fit in a bigger battery.

The UX51Vz isn't immune to the bloatware epidemic that seems to affect most Windows machines, though ASUS exercised some restraint here. The pre-load mostly consists of Microsoft-branded utilities, such as the Fresh Paint drawing app, a 60-day Office trial, SkyDrive and Skype, plus a handful of ASUS' own applications. You'll find ASUS Install, a one-stop shop for installing drivers and programs -- only for pre-selected apps like Cyberlink Power2Go, however. An ASUS calculator and a measurement conversion utility are also on board, and there's also ASUS Tutor for helping users master the new terrain of Windows 8.

ASUS bundles the UX51Vz with a one-year warranty, which includes accidental damage coverage and 24/7 tech support.

We tested the ASUS UX51Vz-DH71, packing a 2.1GHz Core i7-3612QM processor, 8GB of RAM, NVIDIA GT650M graphics and a 256GB SSD. This configuration will set you back a hefty $1,949 -- and, amazingly, that's the entry-level price. Big spenders can splash out even more for the $2,399 UX51Vz-XH71, which runs Windows 8 Professional and boasts dual 256GB SSDs. And before we open the playing field up to other companies, it's worth mentioning that ASUS offers other Zenbooks that sport touch-enabled displays. The 13-inch Zenbook Prime Touch will go on sale later this month, and a touch-enabled 15-incher will come later.

Given the lack of a touchscreen, we expected better longevity.

If 15 inches is your sweet spot, the Sony VAIO S Series 15 is another, similarly configured option. For $1,700, you get a 2.2GHz Core i7 CPU, 12GB of RAM (!), a 256GB SSD and NVIDIA GeForce GT 640M LE graphics. Like the UX51Vz, the E Series 15 sports an IPS display with a 1,920 x 1,080 (also non-touch) resolution, though this system weighs a heavier 4.42 pounds and is thick enough to include an optical drive. There's also HP's 15-inch Spectre XT TouchSmart which, yes, sports a 1080p IPS touchscreen. A price tag of $1,569 affords you a Core i7 CPU, a 128GB SSD and full versions of Adobe Photoshop Elements and Premiere Elements. The trade-off here, though, is integrated Intel HD Graphics 4000 rather than the NVIDIA chips found in ASUS' and Sony's systems.

And if you don't bat an eye at the UX51Vz's price tag, you might consider the 15-inch Apple MacBook Pro with Retina display. It offers a 2.3GHz Core i7 CPU, a 256GB SSD and discrete NVIDIA graphics for $2,199. Its advantages are a brilliant panel and superior battery life -- though the lack of Windows 8 will no doubt be a dealbreaker for some.

Is the UX51Vz a worthwhile purchase? Could be: it packs high-performing internals into a sleek package and offers a comfortable keyboard, to boot. But few though the cons may be, they could be reason enough to justify passing this system up. The machine verges on cost-prohibitive, especially considering the battery life isn't great and there's no touchscreen for interacting with Windows 8. If those shortcomings don't deter you, though, the UX51Vz is easily the most powerful Ultrabook you can get.

In this article: asus
All products recommended by Engadget are selected by our editorial team, independent of our parent company. Some of our stories include affiliate links. If you buy something through one of these links, we may earn an affiliate commission.